Card Shark by Nerial and Devolver Digital is a unique game about cheating your way to victory in card games based on actual tricks. Check our Card Shark review!


Card Shark by Nerial and Devolver Digital is a unique game about cheating your way to victory in card games based on actual tricks. The story starts in what looks like a tavern near Pau, in the South of France. After waking up late, you are ordered by Ms. Porterhouse to hurry up and complete your tasks. You end up serving wine to the Comte de Saint-Germain, a distinguished-looking man sitting at one of the tables.

He asks you to sit with him – after noticing how rough Ms. Porterhouse is to you – and asks if you’d like to earn extra money. His plan involves a game of cards, which you’ll help him win with some clever cheat techniques. That night, while helping the Comte cheat his way to victory, his opponent discovers your scheme and pulls out his gun, only to accidentally kill Ms. Porterhouse in the process. With you being potentially seen as the killer, you’ll end up fleeing with the Comte, who’ll bring you to a camp to meet the Magician, a man who’ll provide you with a place to rest at his caravan, while taking donations from the earnings of the card games you participate in. 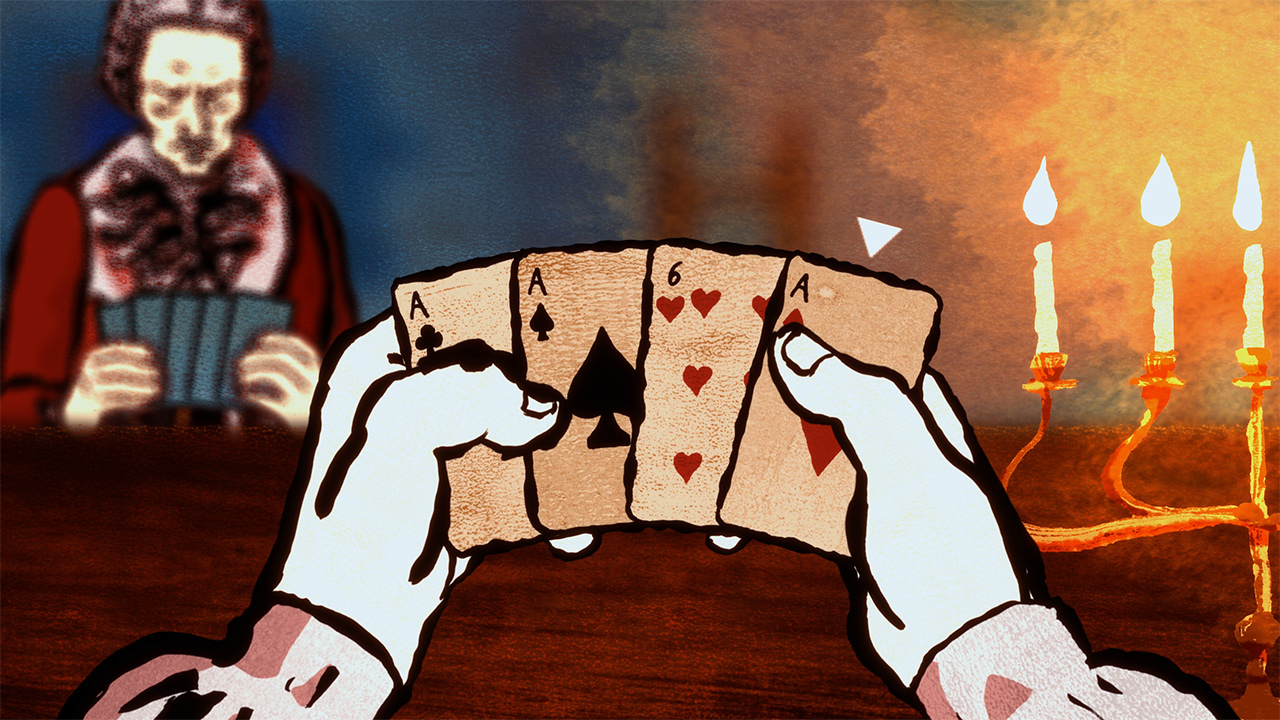 When you’re not cheating at card games, you see the game from a 2D side view where you can see some points of interaction, like people to talk to, with an icon, and you can go see them with the left joystick and interact with the press of a button. You’ll also have access to a map when leaving a location, where you’ll be able to select places where people are available for card games. Upon selecting a place, this is generally the moment where you’ll be listening to conversations with the Comte while riding there, learning new cheating techniques that you’ll use at your destination.


Speaking of cheating techniques, this is where the core gameplay of the game resides. Without explaining every technique in detail – because, with 28 techniques to learn, you’d be in for a huge wall text – I’ll try to cover the essence of how things work. All the techniques you’ll learn require the use of the left analog stick, either to manipulate cards or to actually move and go to a discreet place and the four face buttons (X, Y, B, A). For example, the first technique you’ll learn sees you serving wine, looking at the card’s of the Comte’s opponent, and then cleaning the table with specific patterns to indicate what suit has the most cards. Moving the left joystick to the side will see you begin to pour wine, and it is during that time that you’ll quickly need to see the cards, all while making sure you pour the wine just right. You’ll then switch to wiping the table, where you’ll hold the X button while using the left analog stick to indicate each of the four suits as needed. 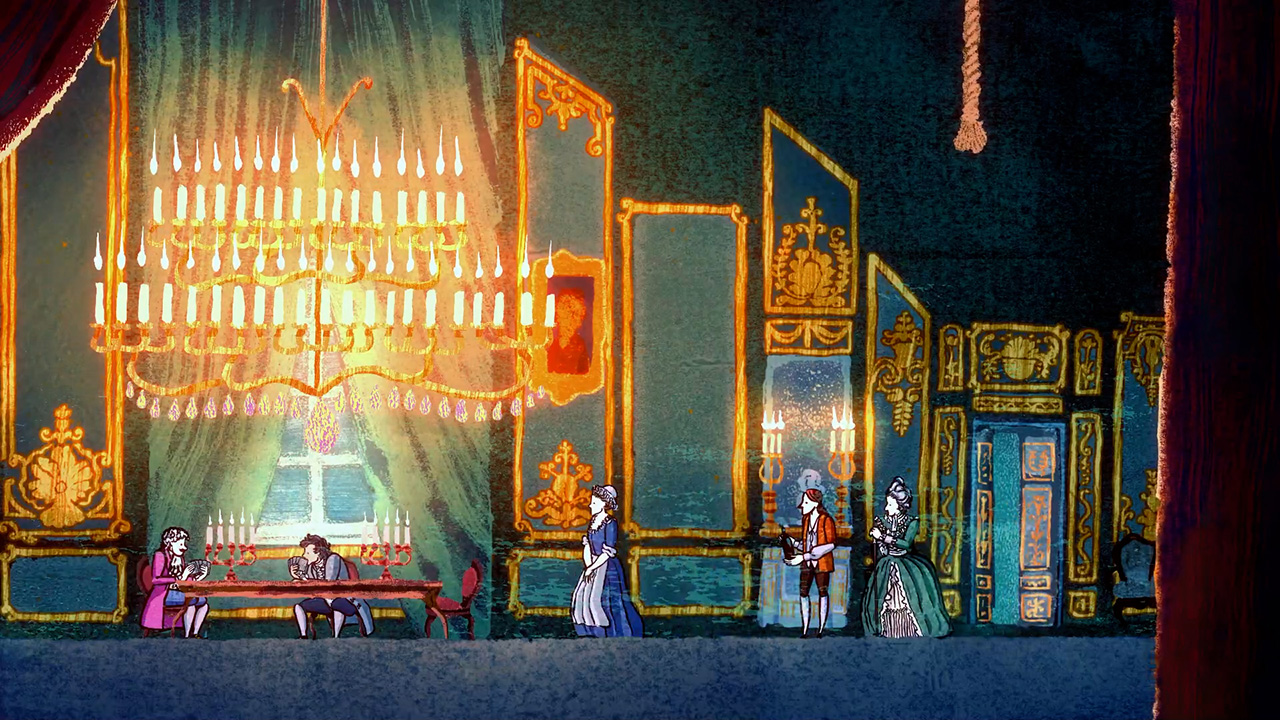 The game features some nice colorful and grainy visuals that give the game a great “vintage” aspect that fits with the 18th-century setting. Animations during the card tricks are well done, and if you mimic the hand motions and the body language of characters in real-life, you’ll notice that the developers did their homework to give us a card game adventure with a unique look and feel. The soundtrack also plays a great part since it feels like the musicians are right next to you while you’re trying to trick Voltaire – yes, you’ll meet him during your time with Card Shark. 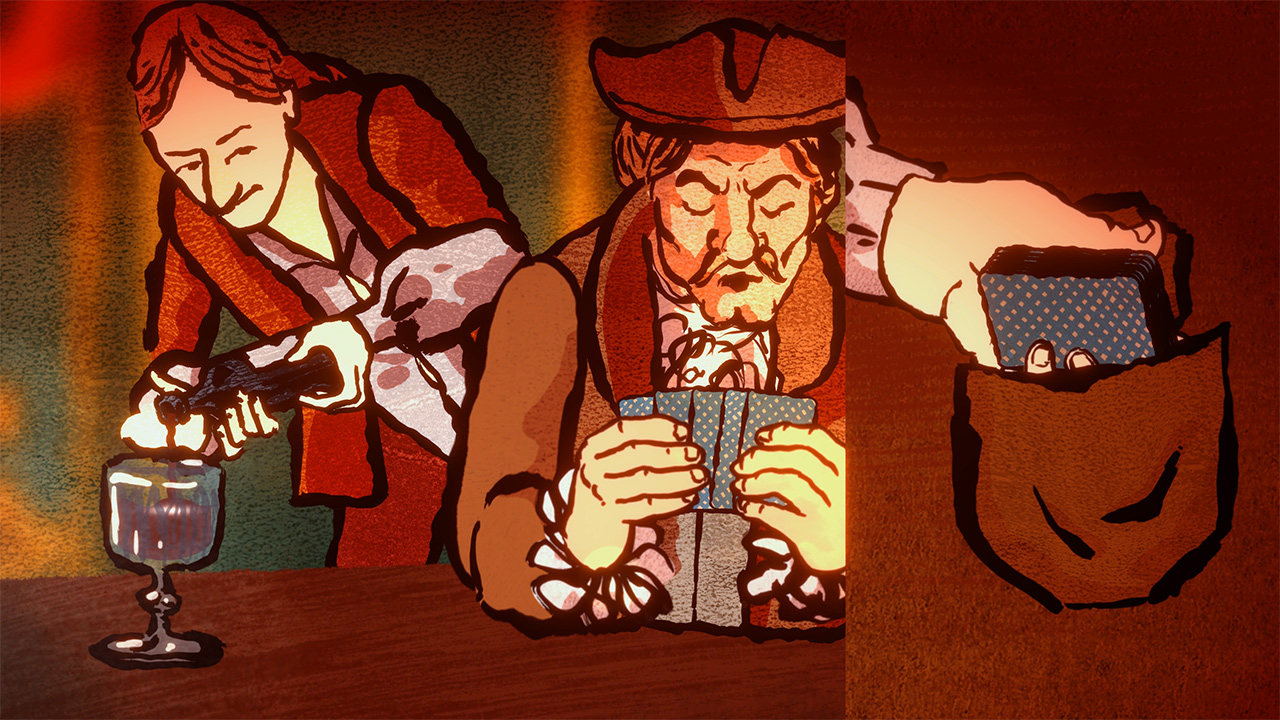 It’s not every day that you get to play a game that stands out among its peers, but Card Shark is one of those games. The idea that you’re learning lots of different card techniques that truly exist is a great concept that actually made me look up a few of those tricks – such as, for example, the Three Card Monte). This great idea comes with a bit of a downfall, though. Once you’ve learned the techniques, there aren’t a lot of visual reminders to tell you how to pull them off, which means you either have to take some notes and refer to them or have an incredibly great memory to remember them all. It won’t be long in the game before you have learned close to 10 techniques, so you don’t even have the time to master them when you’re already switching to another one. But if you can manage to apply the techniques without raising suspicion – which is not that easy, even on the lowest difficulty setting – and win each round, the game is really satisfying. 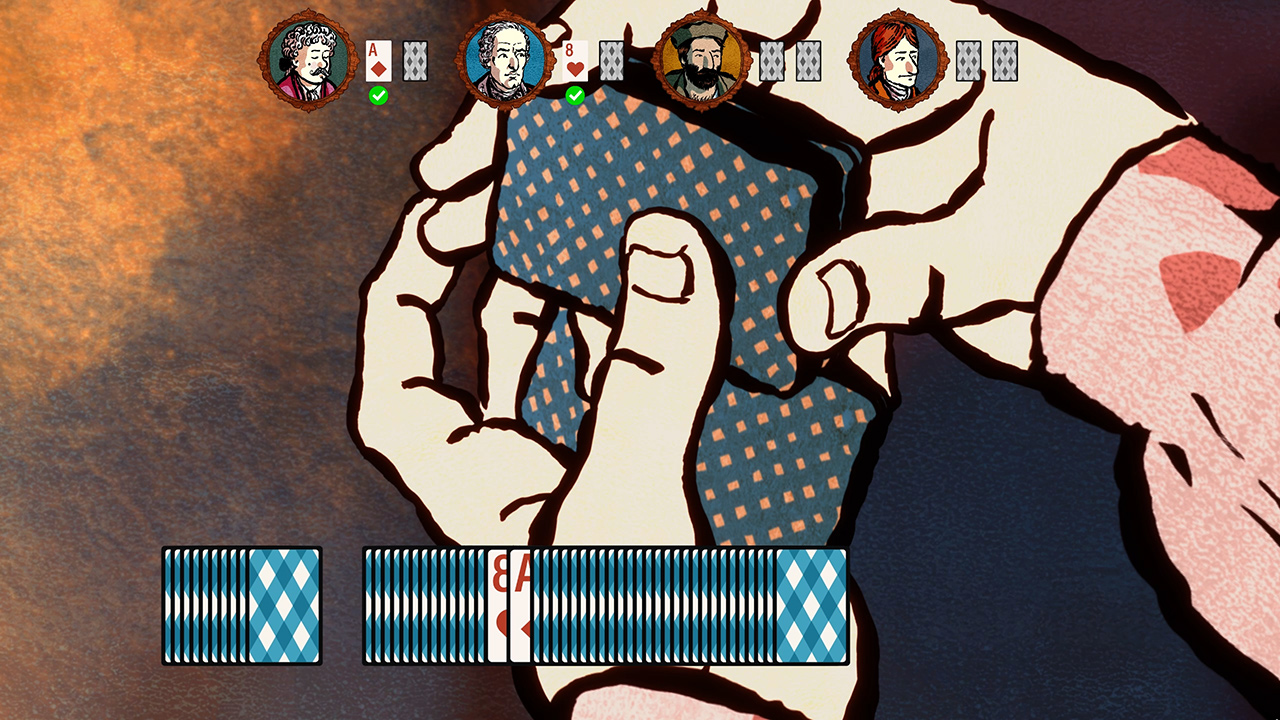 Card Shark is an interesting game thanks to its charming visuals, excellent soundtrack, and fun gameplay mechanics. The only thing to keep in mind is that if you want to enjoy the game, you’re going to have to practice each of the card tricks so that they are always on your mind. This is not the type of game you can play for a day and then walk away from to come back and play some days later since, odds are, you might forget some of the tricks. Card Shark is out today on Nintendo Switch with a $19.99 asking price. 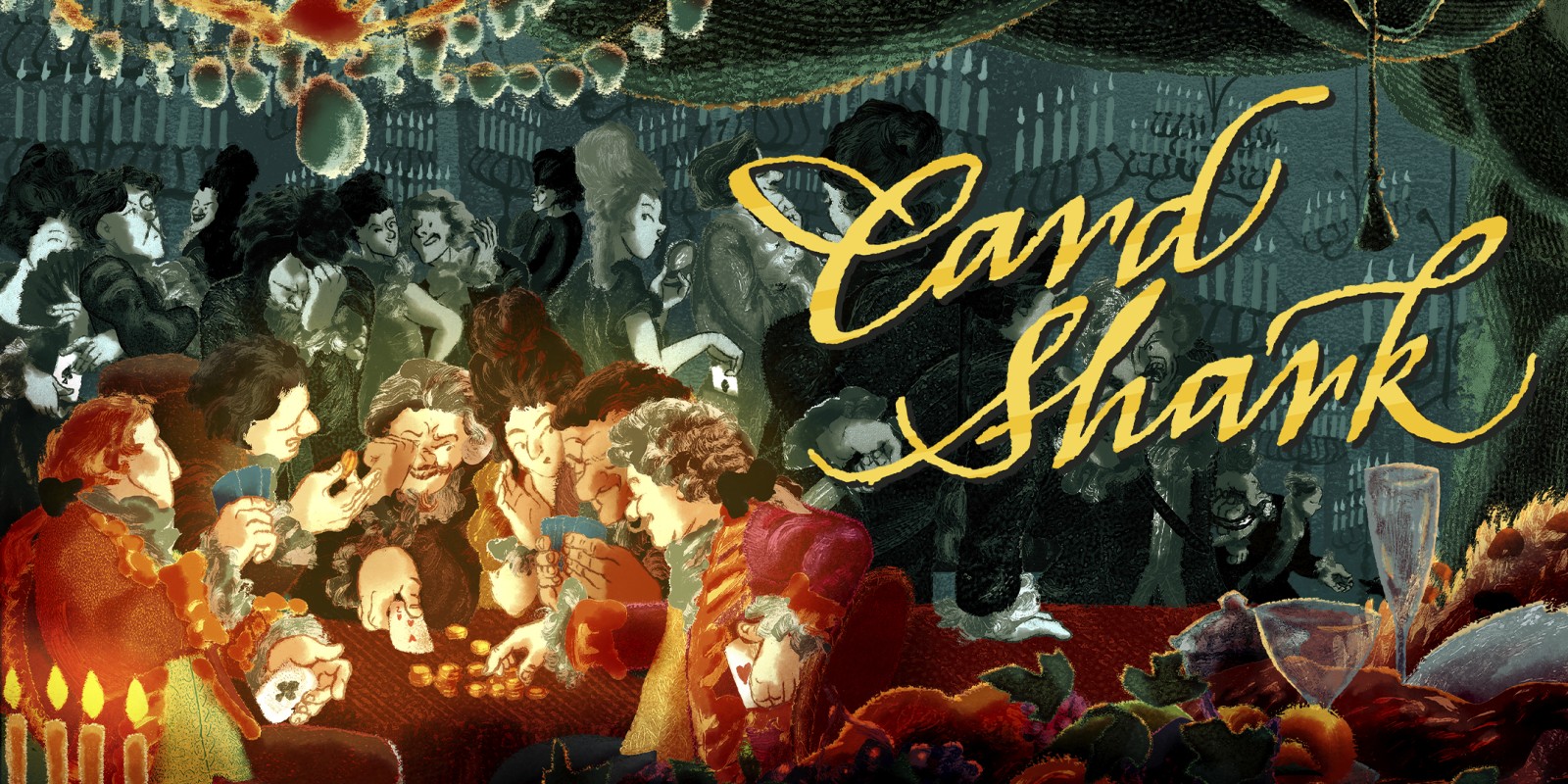 Unique and interesting card game where your goal is to cheat

Disclaimer
This Card Shark review is based on a Nintendo Switch copy provided by Devolver Digital.

Clan O’Conall and the Crown of the Stag Out Today