Are you ready to go back in time to check out two great RPGs from NIS America? Then here’s our Prinny Presents NIS Classics Volume 2 review!


Are you ready to go back in time to check out two great RPGs from NIS America? After giving us Prinny Presents NIS Classics Volume 1, NIS America is back with volume 2 to shine the light on a pair of excellent JRPG from their classic catalog! Volume 1 gave us Phantom Brave: The Hermuda Triangle Remastered and Soul Nomad & the World Eaters, and for Volume 2, it’s time to play Makai Kingdom: Reclaimed and Rebound and ZHP: Unlosing Ranger vs. Darkdeath Evilman on Nintendo Switch.

Makai Kingdom was originally released back in 2005 on PlayStation 2 as Makai Kingdom: Chronicles of the Sacred Tome. It’s a spin-off of the beloved Disgaea tactical RPG series in which you’ll be playing as Overlord Zetta, a godlike entity who ends up making a huge mistake after trying to prevent the destruction of the Netherworld. To survive, he ends up confining his soul into the Sacred Tome. In order to rebuild the Netherworld, he is forced to seek the aid of other Overlords so that they can write their wishes in the Sacred Tome so that he can eventually bring back to life his own world. 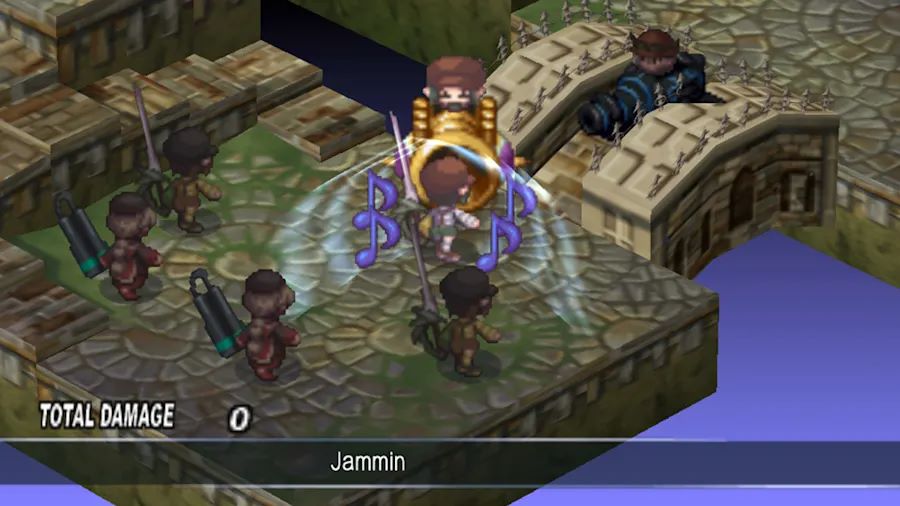 Gameplay-wise, Makai Kingdom shares some elements with Disgaea. You will take on a ton of isometric SRPG battles as you use your units and their abilities to overcome all odds and destroy your opponents. Instead of having a group of characters to put into play in each battle, you’ll instead have several souls that you can use on items to confine them. Depending on which item you use for this, their stats will be affected. For example, if you do this on a rock, a character’s defense will be increased. If you instead use it on a flower, then its intelligence will receive a boost.

There’s a nice variety of characters to choose from as you start to create your group. You can go with a healer to keep everyone in the best possible shape. An apprentice is always a solid option to add some extra brawn to the gang. A junk trader could also prove useful since it will fight enemies while balancing accounts, making it possible to gain extra money in battle. You also might want to add a witch into the mix so that you can use her magic spells to destroy your opponents. 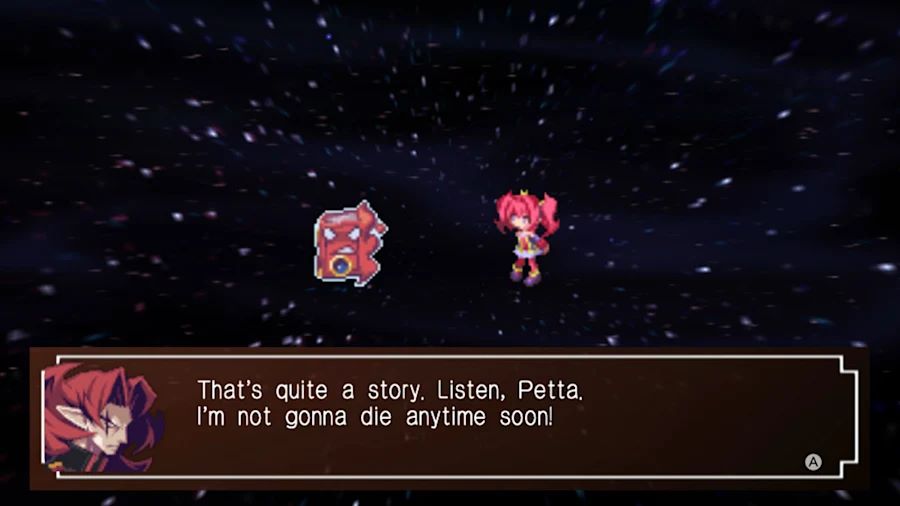 Battles are also slightly different in that you won’t be moving from square to square to then target your opponents. Once in play, each of your characters will be able to move within the circle that establishes its movement area. Select an attack or ability, and you’ll then be able to target the area over which it will unleash its effects. You’ll see which opponents – or friendly units – it can target based on the markers that pop over their heads as you move the area of effect.

The money you collect can be used at the Overlord’s shop to purchase weapons and armor to equip your characters, as well as to purchase items that can be used in battle to heal allies or to damage enemies. The shop’s level will increase as you progress through the game and purchase more and more stuff. You can buy daggers, swords, axes, nunchakus, spears, rapiers, books, robes, lite and heavy armor, shields, capes, helmets, and hats. 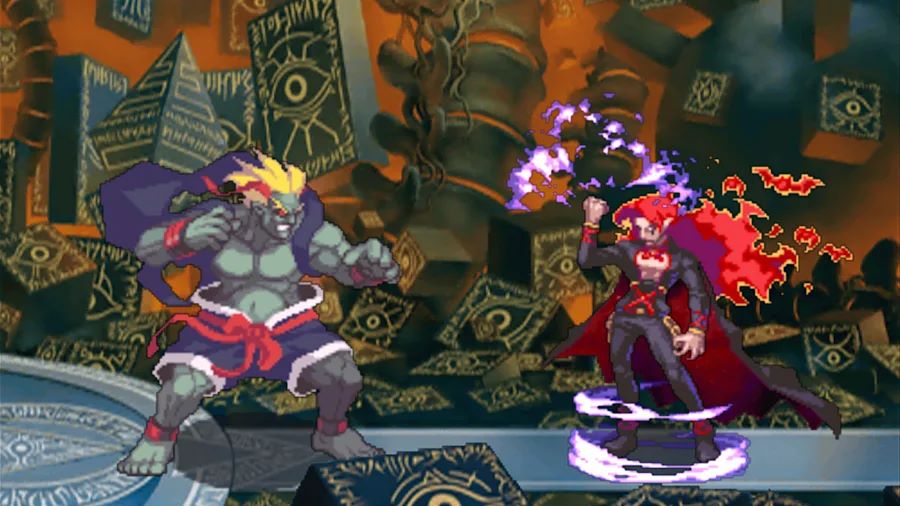 You’ll also be able to dive into Petta Mode, a special bonus experience in which you’ll be able to take on new scenarios as Petta, who is Zetta’s daughter from the future. This bonus mode was originally added for the PlayStation Portable – a.k.a. the PSP – port of the game, so it’s now part of the version you get to play on Nintendo Switch. You’ll play through the “Father is the is the Strongest Overlord Arc,” which is intended for those of you who have already completed the main story in Makai Kingdom since there’s not much of an intro to the characters that you’ll meet, and there are no tutorials since it’s assumed that you’re familiar with how the game works.

ZHP: Unlosing Ranger vs. Darkdeath Evilman is a game I had been looking forward to checking out since it’s the rare NIS America game I never played back when it was originally released. This one launched on the PlayStation Portable in 2010, and it’s also a strategy RPG in which you’ll take on crazy battles to try and overcome insane odds. Actually, allow me to rephrase that: you’ll take the one battle to try and overcome insane odds. Yes, there’s only one battle in this game, but worry not, since it’s an epic one that will decide the fate of the world!

It’s the year 20XX, and a prophecy states that a baby would save the world. It is said that the child born at 6 a.m. on the 6th day of the 6th month would wield unlimited power. The people called her the Super Baby, heralding the kid as their savior. The Demon General Darkdeath Evilman learns about the Super Baby, so he ends up kidnapping her! Luckily, the Absolute Victory Unlosing Ranger is ready to save the day! Once his heart of love and justice is set ablaze, nothing can stop him!


After being defeated, you end up in Bizarro Earth, a different version of the main Earth where everything done in one affects the other. The World Hero Society (WHS) is very much aware of this and ends up taking advantage of things by setting up a base in Bizarro Earth. It seems that every famous hero out there must first graduate from the WHS program at the training facility over Bizarro Earth before going into action. As you’ve probably guessed by now, you’ll have to train at Bizarro Earth before you have a shot at taking on Demon General Darkdeath Evilman in the for real, truly final boss battle. 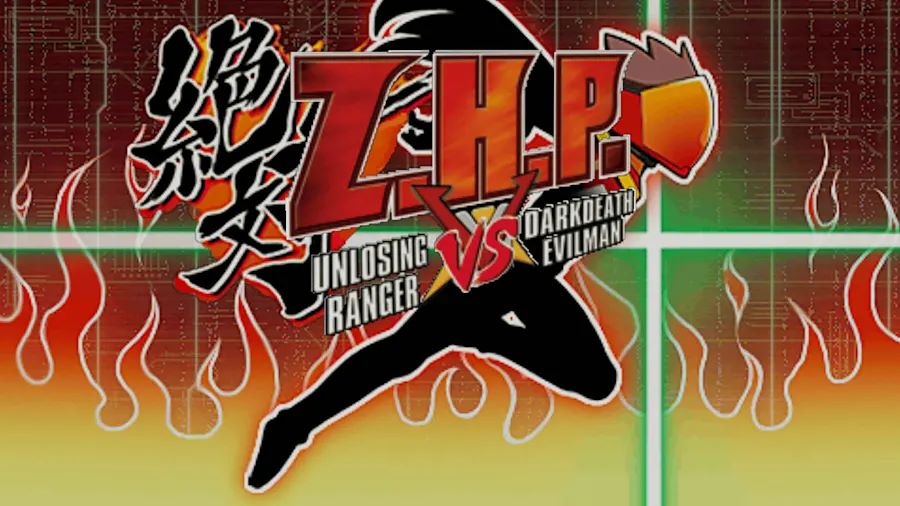 You’ll then get thrown into a tutorial so that you can learn more about the gameplay mechanics for ZHP: Unlosing Ranger vs. Darkdeath Evilman. The dungeon you’ll take on after completing the tutorial? Dungeon Crawling for Dummies! But before that, you’ll learn about moving around each dungeon with the D-Pad, changing the direction you’re facing by first pressing and holding down the Y button. The direction you’re facing is very important because if an opponent flanks you or attacks you from behind, it will deal massive damage to Main Character!

At the top of the screen are two gauges you need to keep an eye on. There’s one that indicates your hit points, which can be restored by using items. Moving around each dungeon will also slowly replenish some of your health. If the hit points gauge falls down to zero, then your training ends, and you’ll be sent back to the home base to give it another go. The other gauge is the EN (fullness) gauge. Under normal circumstances, your EN gauge will decrease by 1% for every five spaces you move. If your EN gauge hits zero, then your hit points gauge will gradually decrease! This is why you should always have some items to eat to replenish your EN. If you press and hold down the A and B buttons, then Main Character will stomp in place, regenerating hit points at a faster pace while also lowering the EN gauge. 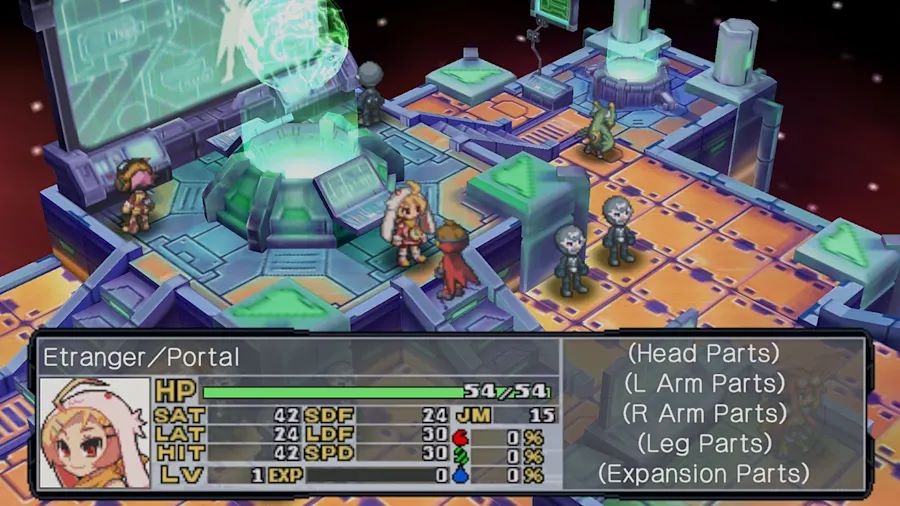 You’ll need to keep an eye on your stats as you progress through your hero training. SAT will determine your short-range attack power. SDF is for your short-range defense, which affects how strong your defense is against short-range attacks from your opponents. LAT is your long-range attack power, a must for attacking enemies from an overall safer distance. LDF is your long-range defense so that you can take a long-range hit from opponents without suffering too much. HIT is for the chances of your attacks landing. SPD is your speed, which will show the rate at which you can evade attacks from enemies. LV is your current level. JM is your jumping power, so the higher it is, the easier it will be to reach some spots.

As you explore each dungeon, you’ll notice a blinking space around each enemy. This represents their view range. Once the Absolute Victory Unlosing Ranger enters one of said blinking spaces, the enemy will notice you. Thanks to this, as long as you don’t enter any of said areas, the enemies won’t notice you, no matter what you do. Any enemy that has noticed you will switch into attack mode, following you around as they try to defeat you. If an enemy that has noticed you enters the view range of another enemy, it will also alert it. Every single enemy will move at once, so if you’re surrounded, you’re in for a world of hurt! You also need to be careful when defeating an enemy since it will let out a death cry that will also alert any nearby opponents.


While exploring dungeons, you’ll have to make the most of the items you find in a dungeon that are dropped by enemies, as well as the stuff you can buy at shops with your money. You can equip items on your head, on each of your arms, and on your legs. Items that are damaged and have lost their luster can either be repaired by a blacksmith, or you can throw an item to deal damage to enemies. If you pick up an item o an enemy, you can carry them around, but do know that doing this will lower your EN at a faster rate. 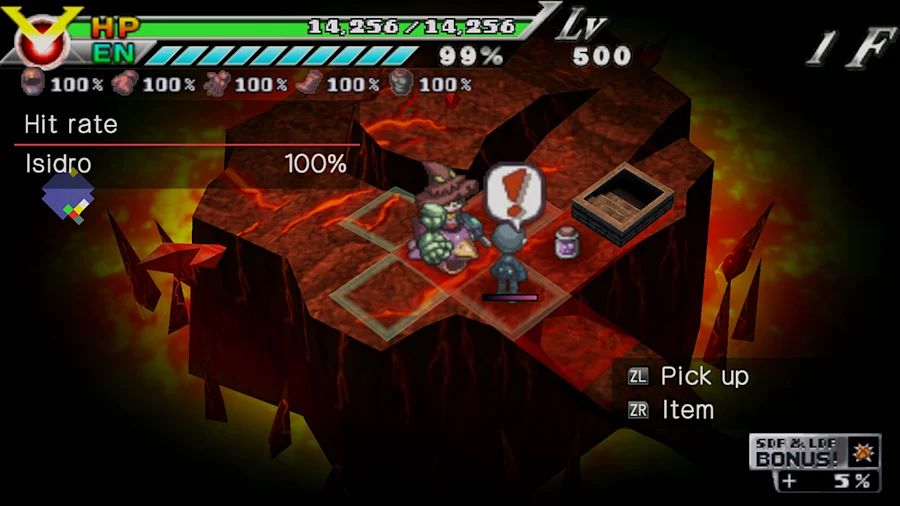 When you clear a dungeon or are defeated, your level will revert back to one. There’s also a Total Level, which will accumulate as you progress through the game so that you don’t end up back at square one. Based on the total Level, Main Character will receive boosts to his stats. Something else to consider is the element resistance of Main Character. The flame icon shows your resistance against fire-based attacks. You can probably guess what the wind and water icons are related to. The default for each element resistance is zero. A positive percentage means Main Character has a resistance to said element, while a negative percentage means you have a weakness to that element.

Prinny Presents NIS Classics Volume 2 gives us two very fun RPGs from the NIS America classic catalog to play at home or on the go, offering dozens of hours of gameplay as you take on the pair of journeys offered by Makai Kingdom: Reclaimed and Rebound and ZHP: Unlosing Ranger vs. Darkdeath Evilman. The voice acting is great, and it helps to elevate the story segments for each game. Prinny Presents NIS Classics Volume 2 is out on May 10 with a $39.99 asking price. 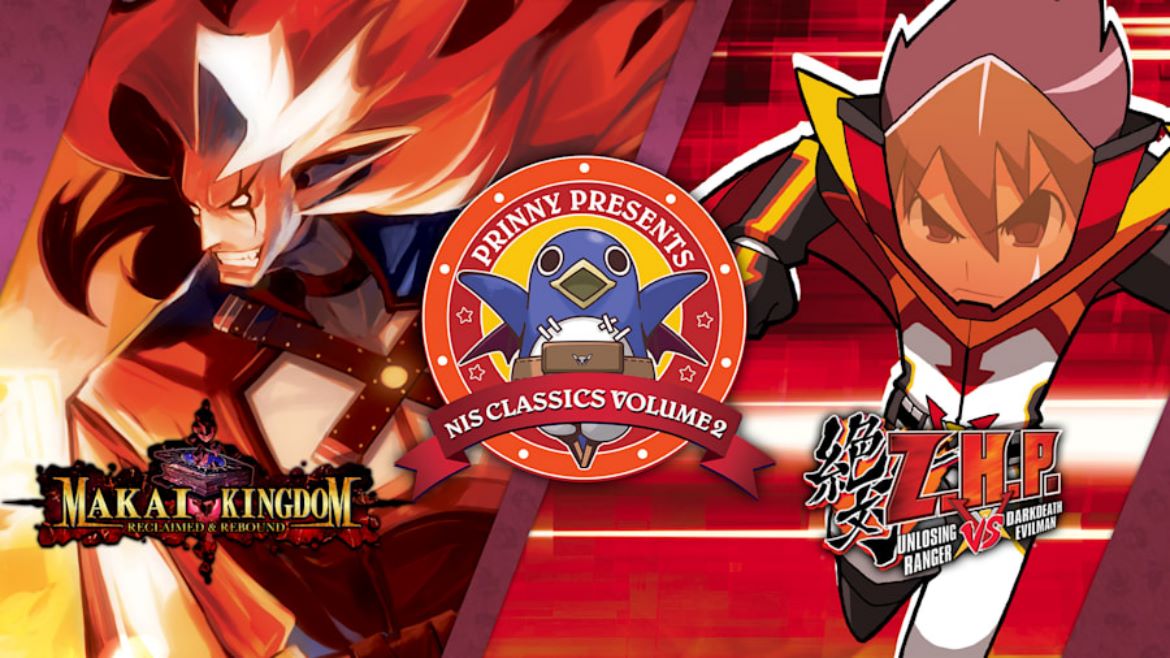 Great pair of RPG classics you have to check out

Disclaimer
This Prinny Presents NIS Classics Volume 2 review is based on a Nintendo Switch copy provided by NIS America.

Redout 2 Out This Month On Consoles