Rogue Lords from Cyanide, Leikir Studio and NACON is a challenging diabolic roguelike experience on PlayStation 4. Learn more in our Rogue Lords review!


Rogue Lords from Cyanide, Leikir Studio and NACON is a challenging diabolic roguelike experience on PlayStation 4. After the mortals, led by Demon Hunters, defeated all monsters that stood in their way, they ended up chasing and cornering the Devil himself. He was forced to return to Hell to survive, consuming fresh souls to regain his power, but there are not enough souls to speed things up, so it’s time for him to regain his power in the land of the living by calling upon the creatures that made a pact with him.

Your journey will begin from the Devil’s lair, where you’ll be able to launch new adventures, read more about your Disciples, and review your progress on the Altar of Conquests. Since the Devil’s influence is not the same as it used to be, there won’t be many Disciples to send into the world of men to eradicate all humans. You’ll at least be able to call upon the powers of bloody Mary, Dracula, and the Headless Horseman. Bloody Mary has lost touch with reality, living inside of her own little world where murder is the most amusing thing she can do. Dracula is a born leader who uses his spells to aid allies in combat, unleashing his mighty wrath upon anyone foolish enough to stand in his way. The Headless Horseman is a powerful entity that harvests the power from every blow he receives in order to unleash a powerful attack that can turn the tide of battle. 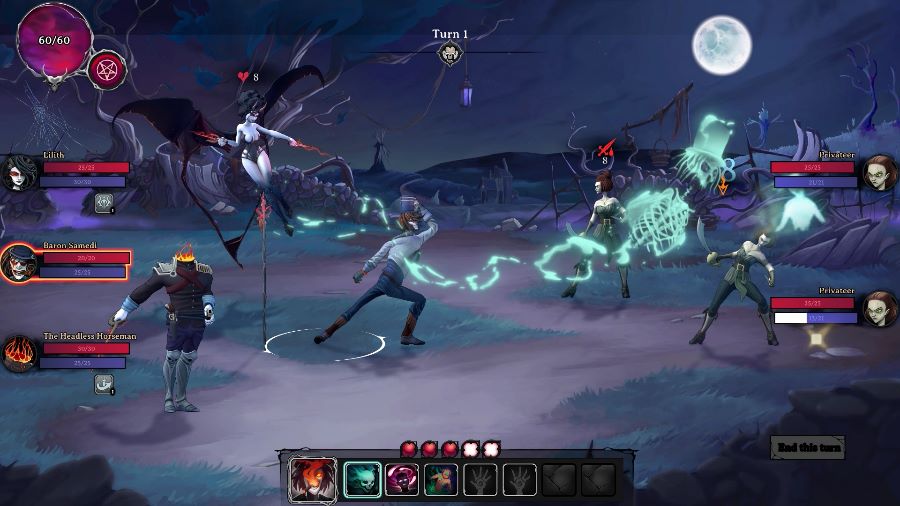 Each of your Disciples will have different stats to consider. Health points are important since they’re tied to a Disciple’s potential for resisting physical damage. Once a Disciple runs out of health points, all damage will instead be dealt directly to the Devil. Spiritual points are a Disciple’s resistance to spiritual damage. They will also have stats for scare, occultism, temptation, stealth, and ruse, which will come into play at various times during your many runs. They will also have some starting relics to consider, as well as initial skills that can be put to good use in battle. The further you progress in the game, the more skills you’ll unlock for each Disciple.


Once you start a run, you’ll select a group of Disciples and will choose one to represent the group. You’ll then move from zone to zone by selecting the route to take on the map. On the map, you should check each of the symbols for the nodes you’ll explore so that you can know what you’re going to get yourself into. You’ll end up going into a regular fight, an elite fight with more powerful enemies, an event, find a Styx Fountain, a Sacrificial Altar, run into the Grim Reaper, find a random node, and eventually reach the final battle for that run. 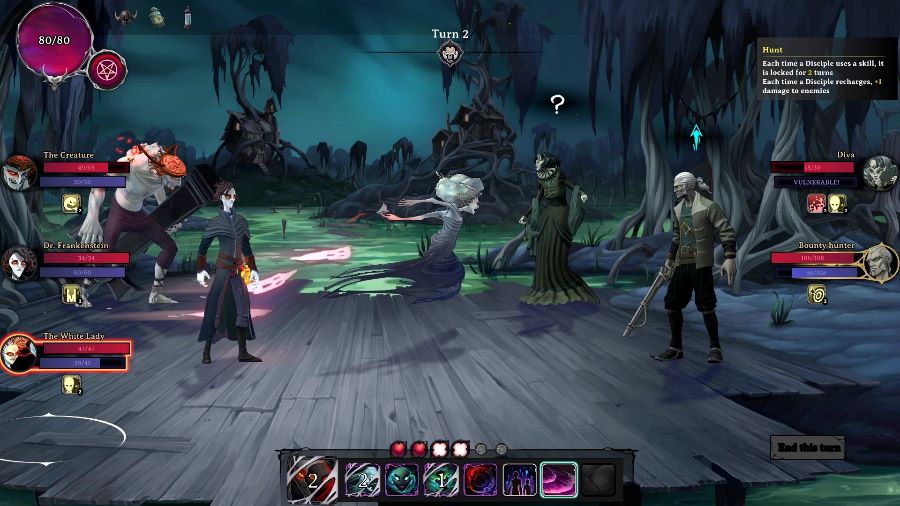 Combat nodes are self-explanatory. Events will have you choose a Disciple to try and find rewards and take on specific situations for which the outcome will vary based on their stats. A Styx Fountain can be used to regenerate your Diabolic Essence or purge any negative traits from your Disciples. At the Sacrificial Altar, you can sacrifice one of your skills to unlock an additional skill slot for your Disciple while also receiving a new skill to slot. You can sell your souls to the Grim Reaper in exchange for skills and relics. You could also leave behind a skill with the Grim Reaper so that it can increase its power before returning it at your next meeting.

Diabolic essence is your main resource. If it runs out, then it’s game over! You can also take on the risk/reward system that Rogue Lords offers by spending some of it during combat or use it to boost your influence over the world of mortals. Just be careful that you don’t spend too much, or else your next fight could be your last! The better you do, the more Terror you’ll accumulate. Every time you boost Terror, a new effect will take effect on a subsequent night. Increase Terror four times, and you’ll gain a level of Terror, which will boost your chances of obtaining skills of a higher rarity while also rewarding you with a relic. 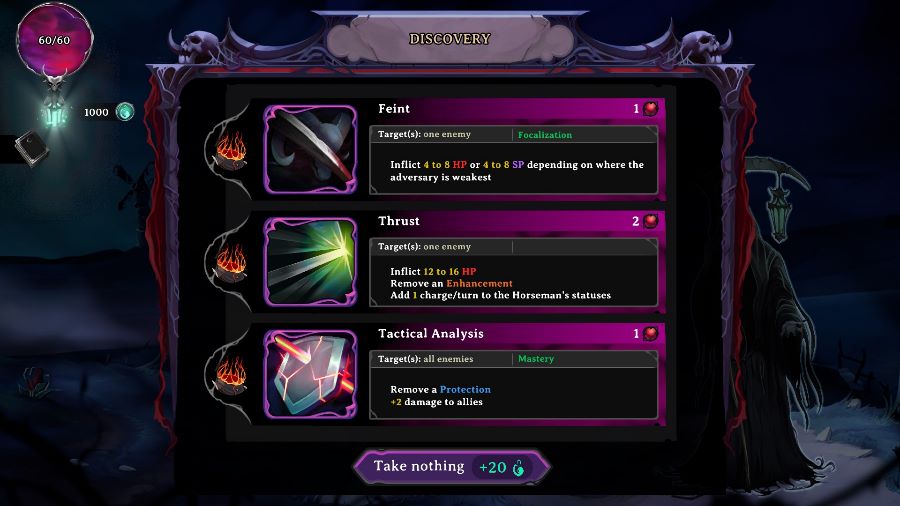 For combat, you’ll get to select your approach before starting a battle. You can, for example, go for a frontal attack, which will increase the terror effect in two nights, set up an ambush to earn a skill at the end of combat, or attack discreetly to gain 20 souls after winning the fight. Balance your choices so that you can gain new skills or obtain duplicates since once you have three copies of the same skill, they can be combined into an improved version, dealing more damage or having a lower AP cost to put it into effect.


At the start of each turn, your enemies will announce their actions so that you can plan accordingly. You’ll have five action points that are shared between your Disciples and must spend them as needed to defeat your enemies. You could, for example, select Bloody Mary and then pick her stabbing skill to deal between 7 to 12 points of damage to an enemy, and then select Dracula’s bleeding heart to deal 3 to 8 points of damage. When selecting a skill, it will be depleted, and it can’t be used again until it is recharged by a Disciple. Recharging skills will recharge all of that Disciple’s depleted skills, but you’ll have to spend some AP for it. 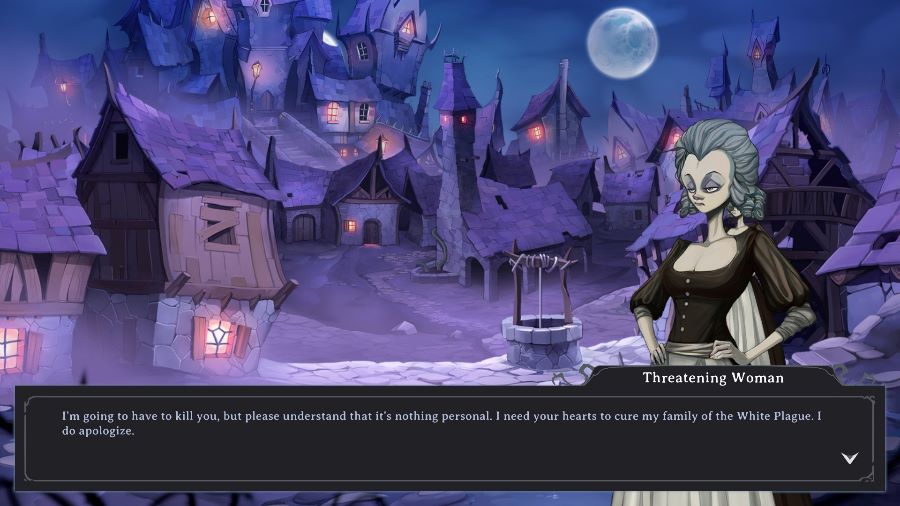 Once you’ve managed to reduce an enemy’s health points or spiritual points to zero, they won’t die right away. You will still need to deal a death strike to deal damage to the corresponding gauge to defeat them once and for all. You should also remember that the Devil is on your side, so be sure to use his power! Press the Touchpad on the controller, and you’ll go into Devil Mode. This will allow you to modify health and spiritual point gauges, recharge skills, and move statuses around, as long as you spend the required Diabolic Essence.


And now, let’s talk about the game’s trophies. Rogue Lords has a full trophy list with a Platinum trophy, and there are plenty of objectives for you to complete. There are several trophies tied to completing each of the game’s story chapters, as well as for beating the evil Van Helsing not only once but with every single Disciple in the game. There are trophies for completing 15 different events, for completing 12 events in a single run, for inflicting 200 damage in a single turn, for visiting 10 Sacrificial Altars, for completing a chapter without visiting the same type of zone more than once, or a trophy for inflicting 80 damage with a single skill, to name some examples. 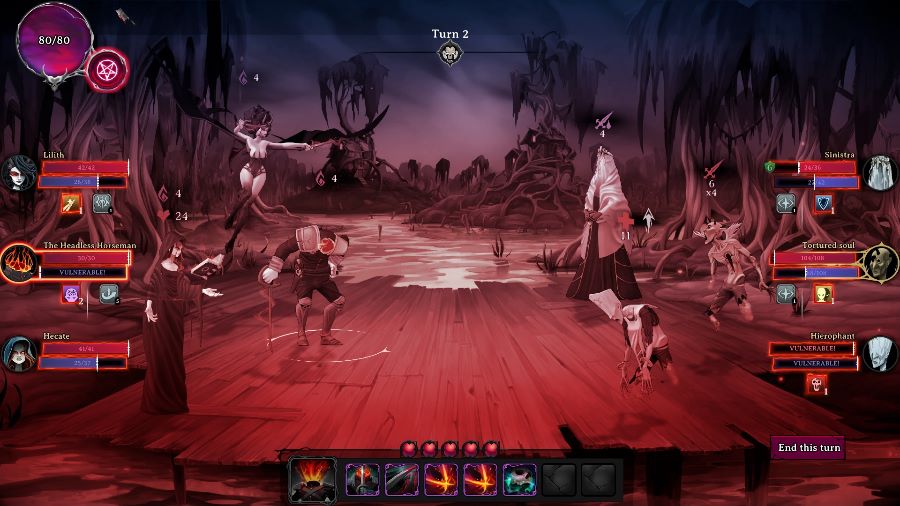 As a fan of roguelike deck-building style experiences, I was looking forward to checking out Rogue Lords on PlayStation 4. It’s a game that is definitely going to be a bit challenging as you begin to play since there are several different gameplay mechanics you’ll need to master to be able to finally complete your first full run as you make the most of the Devil’s power, spending some of his Diabolic Essence to make thee changes needed along the way to defeat the many enemies and deadly Demon Hunters standing on your way. But if you give it a chance, you’ll find that the challenge is there for a reason, since it helps to make this a very addictive experience. Rogue Lords is out on PlayStation 4 with a $29.99 asking price.

Disclaimer
This Rogue Lords review is based on a PlayStation 4 copy provided by NACON.

Trek to Yomi Out Tomorrow