Get Packed: Couch Chaos by Coatsink and Moonshine Studios is a chaotic game about a team relocating a city… and more! Even though the game is aimed at proving couch co-op fun, there’s still a Campaign Mode available with a story tied to it. You live in the town of Ditchlington, one of the largest deposits of rock salts. One day, the CEO of Industrial Salts strikes a deal with the town’s mayor, basically selling the entire city to him. The company started evicting people from their homes to build new things, like parking lots. After helping a few people pack their things and leave, you and three other people end up starting your own packing service company. At first, you’ll only be helping people move from their houses, but someone will eventually come along with bigger plans that will involve Industrial Salts. 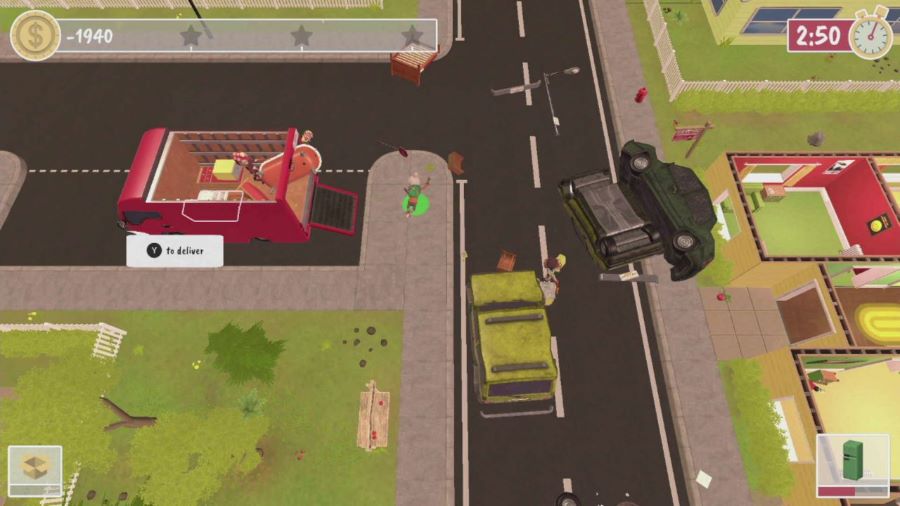 Each level plays out in the same way. You have two and a half minutes to pick stuff up and put it in your van. The more stuff you take out, the more money you’ll receive, but damaging items or parts of the building (like the windows) will be deducted from your earned money. There are also different bonuses and additional objectives to complete that can earn you some extra money. For example, in the bottom right corner of the screen, you’ll eventually see specific items appear with a timer under them. When those show up, your goal is to get these items into your van and have the van leave for delivery by pressing the Y button near the truck, which will earn you the extra money. As you progress through the 18 levels in Campaign Mode, different obstacles and hazards will come into play to make things a bit more challenging. Some levels will have you crossing the street while cars are passing by, and even things like ghosts or cops will start to chase you around a level.


The controls are rather simple for moving stuff around, but with this one being a physics-based experience, you’ll have to practice a bit. You’ll move your character with the left analog stick and use the ZL and ZR buttons to grab things with your left and right hand, respectively, to get them out of the building. If you grab a single object with both hands, holding the Y button will flat pack it into a small box, no matter the size of the object. This is great to save some space in your van to make bigger deliveries. The B button is used to jump, the A button to dash, and the X button allows you to perform a flop where you just fall down like a rag doll, which is actually great to dive through a window after dashing. 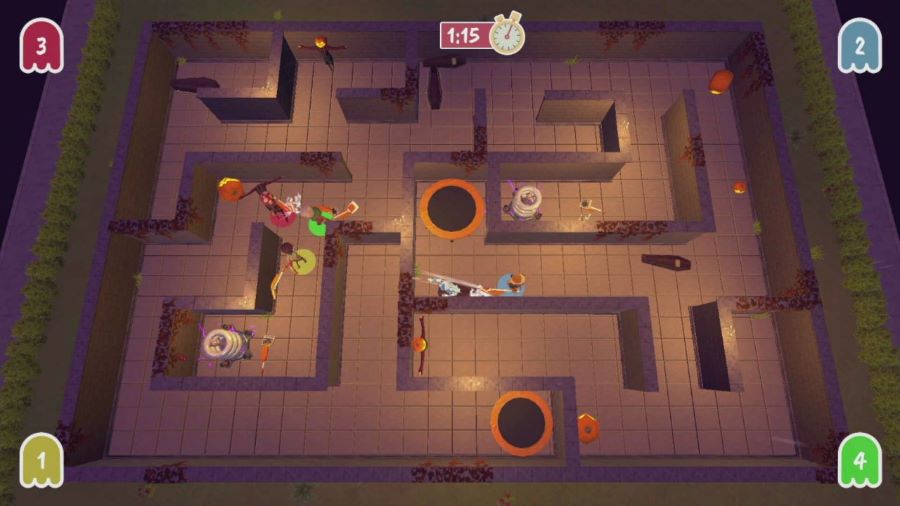 In terms of visuals, there’s a nice variety for the level designs, but like most couch coop games, don’t expect some AAA graphics – the focus is more on the experience than the visuals. With the physics the game uses, you can expect to see objects fly in just about any direction, which sometimes causes issues like getting stuck in your van without being able to get out. Your options then will be to ship yourself out with the van or restart the level.


The first thing that came to mind when I saw this game was “Overcooked, but in a packing flavor.” I was partially right. The game is more like Overcooked and Goat Simulator mixed up together, for better or worse. For better, it’s a great game to play with friends in co-op, with a lot of mini-games and levels to try out. The single-player campaign is also decent for a game that focuses more on multiplayer, with every level being available in different variations after beating them once. For example, the second variation you can unlock is Destruction Mode, where your van will supply you with things like hammers or explosives, and your goal is to cause as much damage as possible! 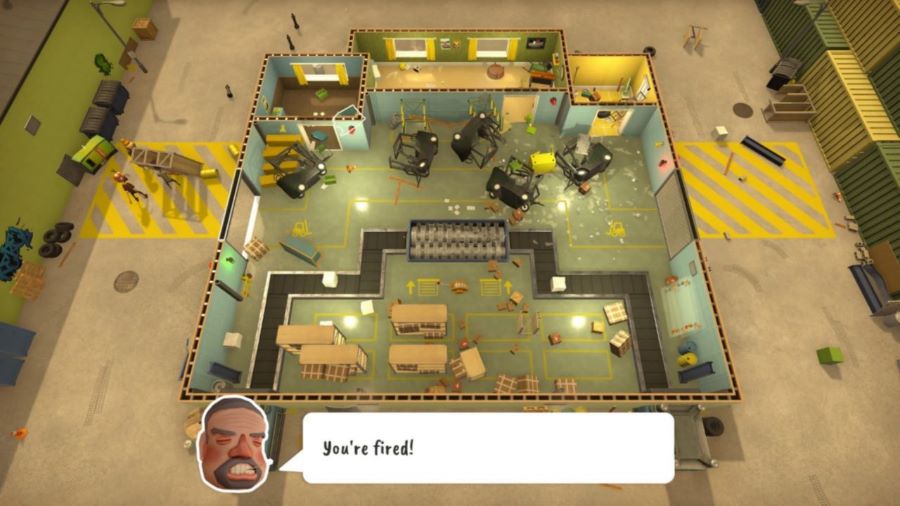 For the worse, well, it’s pretty much everything about the physics engine. Like I mentioned before, finding yourself stuck in your van, not being able to grab an object to move it out of the way to get out, does get to be a bit annoying. Then the whole dynamic of grabbing things with the ZL and ZR buttons does not always do what you want it to do, often grabbing something that is near you, costing you some valuable seconds. 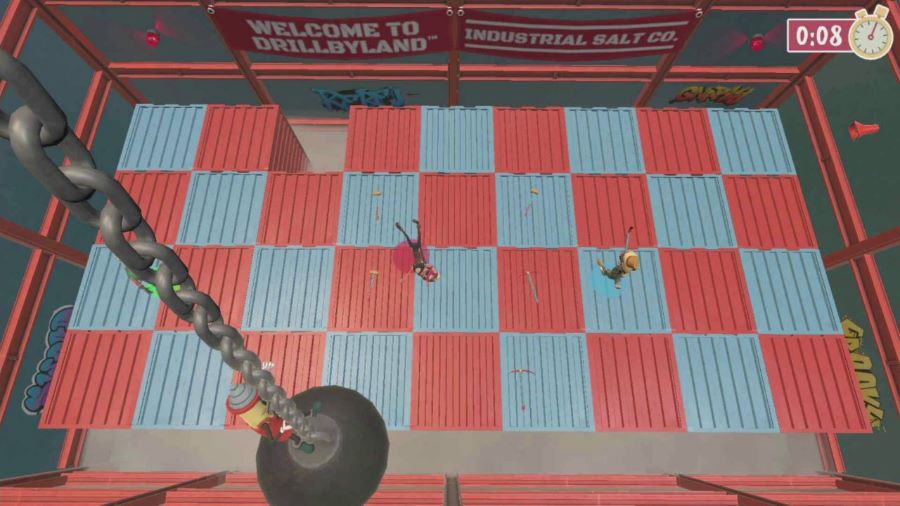 In the end, I have mixed feelings about Get Packed: Couch Chaos. If your intention is to mostly play with friends, I think the annoying parts of the physics engine will quickly be forgotten with the laugh and fun the game will provide. If most of your time will be spent playing solo, it might become a bit frustrating to try to reach the three-star rating in each level as you struggle to grab stuff. Get Packed: Couch Chaos is out on Nintendo Switch at a $14.99 price. 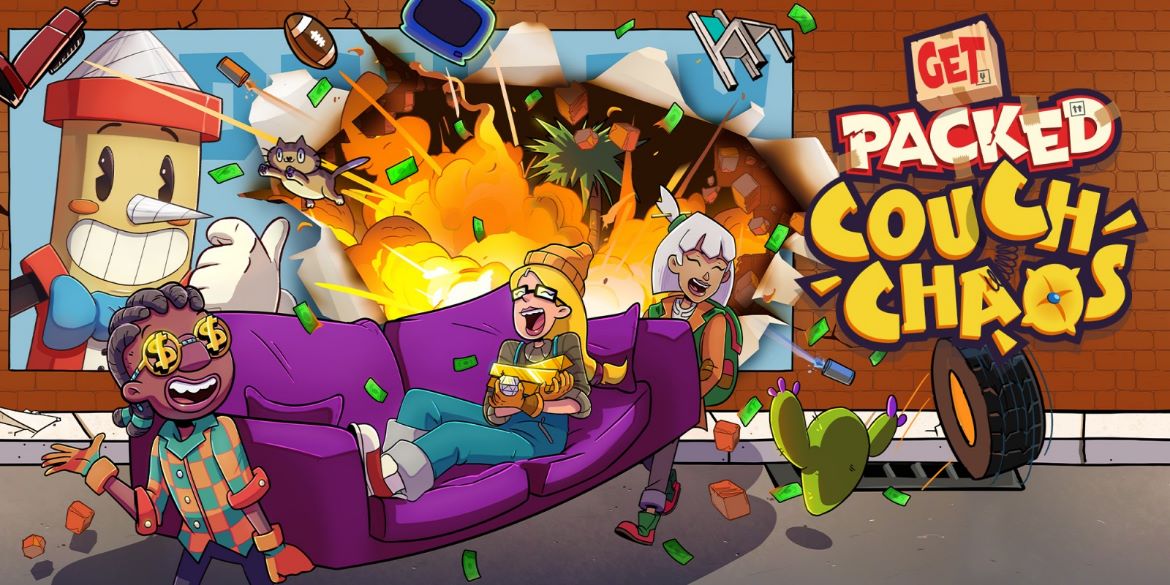 Physics-based couch coop game that's fun when enjoyed with others

Disclaimer
This Get Packed: Couch Chaos review is based on a Nintendo Switch copy provided by Coatsink.