Quill hasn’t finished her quest. Are you ready to pick right up from where the first game and save Moss and all its inhabitants? Check our Moss: Book II review!


Quill hasn’t finished her quest. Are you ready to pick right up from where the first game and save Moss and all of its inhabitants? I loved the original Moss – and its DLC – on PlayStation VR. It was one of my favorite VR games since it was a 3D platformer, something that you don’t see that much on Sony’s VR hardware. That’s why I’m glad that’s Moss: Book II. It picks up immediately after the end of the first game. Quill needs to go rescue her uncle. It’s right after this that you’re introduced to the giant castle and the hub world of Moss: Book II. This is where you learn about the pieces of glass – kind of like the infinity stones – that need to be brought together to save the world. Each realm has a piece of glass, and you need to recover them all. Since the caste is a hub, you will be able to eventually get to all the areas you need. 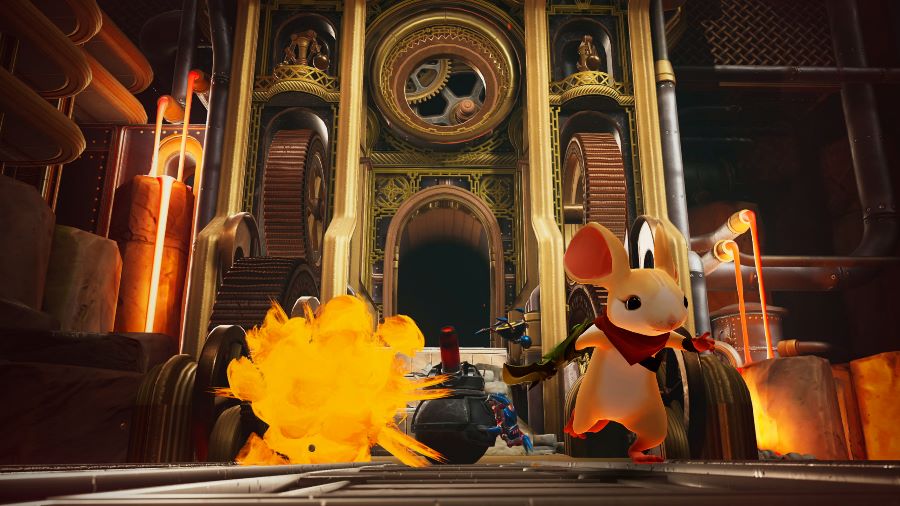 I really liked the overall narrative. In fact, I enjoyed it because it takes a few chances and does some things with the story that I just didn’t see coming. I don’t want to spoil those moments, but you’ll definitely know when they happen. I will mention that at the end of the 4-5 hours experience, I was left satisfied with how Quill’s story was treated. There were still some threads left open for another adventure, though, which is exciting, even if Quill ends up not being the main protagonist. I also want to give a shout-out to the narrator. Moss is a storybook being read to you, and whenever a character in the book talks, the narrator does a specific voice for that character. Each one sounds quite unique and different. She really has a great range! Her narration of Moss: Book II really takes it to the next level by immersing you in the storyline.


At its heart, the prequel was a puzzle-platformer adventure, and that hasn’t changed for Moss: Book II. You control Quill with the DualShock 4 controller – which I had to dig out and charge up to use on my PlayStation 5. You use it to move Quill around and have her attack and dodge. Your DualShock 4 is also represented in the Moss world as a glowing orb, as The Reader. You work with Quill to solve the puzzles between her using her weapons and powers and you moving the world or enemies around her. 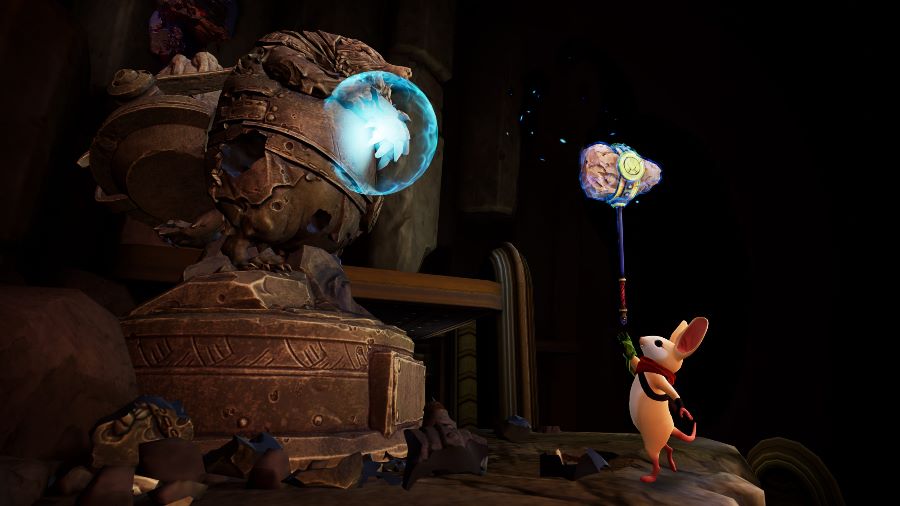 There is combat in Moss: Book II, but it’s still not the most complicated thing. You’ll come across some rooms, and flames go up on the doors, and you must then dispatch the enemies before moving on. There are new weapons to consider for this sequel. Quill will receive a boomerang disc and a hammer to add to her repertoire. The disc is much quicker and attacks from a safe range but does way less damage. The hammer is much slower but does way more damage. I really liked the options and ended up resorting to the disc a lot to keep Quill safe. My one issue with the way these were implemented was how you switch between them. You must press the touchpad, select the weapon, and drag it to Quill on the screen. This, unfortunately, does not pause the action. The whole thing could have been tied to a button command, this making for a better flow in combat.


These new weapons will also be used to solve some of the puzzle platforming segments as well, creating some cool situations where you’ll have to slow down a bit and think about the situation at hand. As you get to the later stretches of Moss: Book II, the difficulty will be bumped up a bit. It won’t ever end up making you feel stumped for a long time, but you might end up stuck for a couple of minutes as things click into place. 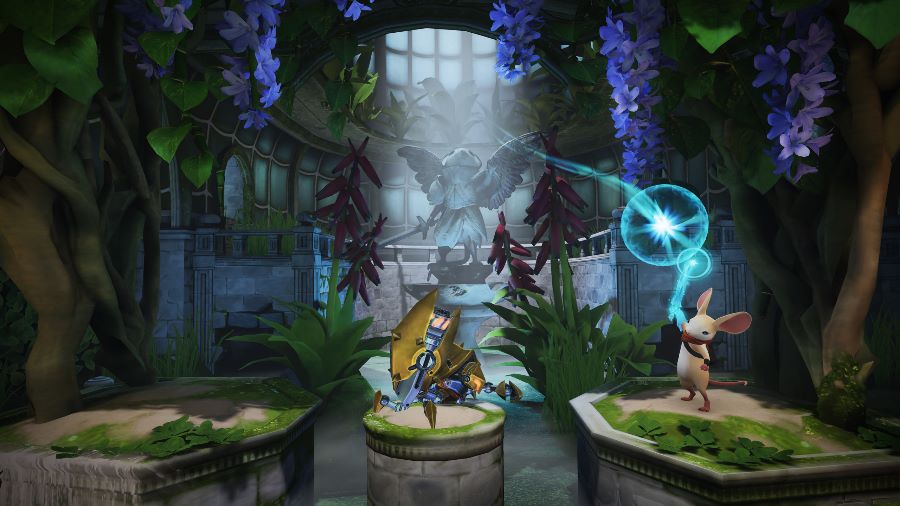 I did run into a few small technical hiccups where after I, as The Reader, did something, such as pulling on some switches, Quill would freeze, even though my orb could still move around. I needed to restart the checkpoint, redoing the puzzle-solving several times before it finally worked and I could move on. Something else I wanted to mention is an issue that is not the game’s fault but is more of a hardware issue: the tracking for PlayStation VR is not that great. The orb representing the DualShock 4 would move up and down even though I was not moving the controller. 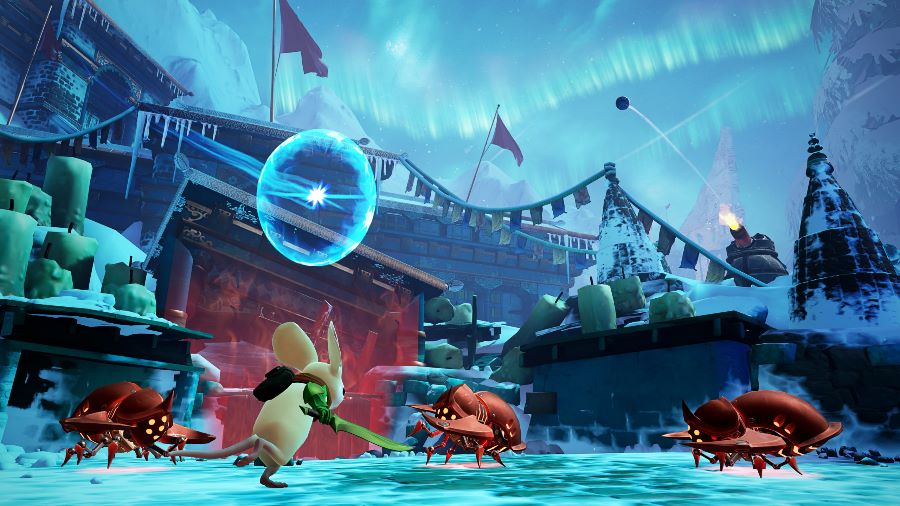 Moss: Book II is a gorgeous game that takes the smaller environments from the first game and finds a way to make them feel bigger and more grandiose for the sequel. The team has strung together larger rooms, changing how you overlook each location, giving the world a very connected feel. Moss: Book II is one of the swan songs for PlayStation VR, showcasing what the hardware can do when a developer gives it its all. The game has a great story, solid puzzles, combat that is refreshed thanks to the new weapons, and an excellent look that makes this one of the best games on PlayStation VR and a must-play. Moss: Book II is out now at a $39.99 price.

An outstanding showcase for PS VR

Disclaimer
This Moss: Book II review is based on a PlayStation VR copy provided by Polyarc.