Tunche from LEAP Game Studios and Hypetrain Digital is a gorgeous and fun hand-drawn beat ’em up on PS4 set in the Amazon Rainforest. Check our Tunche review!


Tunche from Peruvian indie LEAP Game Studios and publisher Hypetrain Digital is a gorgeous and fun hand-drawn beat ‘em up on PS4 set in the Amazon Rainforest. The game throws a dash of roguelike into the mix, which means that every time you start a run, you’ll be going up for a different experience. With every run, you’ll be collecting experience points to level up, and you’ll also be able to purchase new abilities – and upgrade them – to improve your chances of making it to the end. Your goal will be to explore the Amazon Rainforest as you try to find the titular spirit. 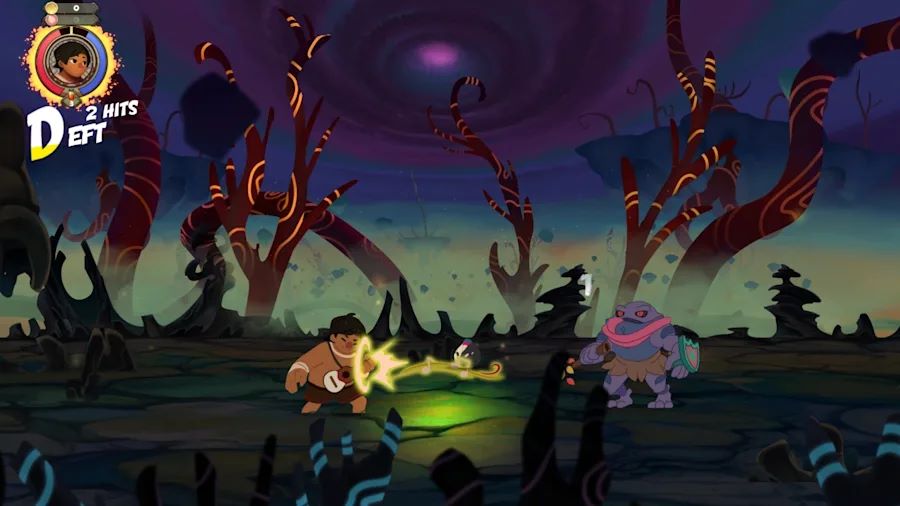 You’ll be able to select one of the five available characters, including guest star Hat Kid from 3D platformer collect-a-ton A Hat in Time. The others are Rumi, Qaru, Pancho, and Nayra. Each one of them will attack in different ways and will offer either a fast-paced character to play as or a more balanced character. Hat Kid will use an umbrella and explosive potions, Rumi uses the power of flames and magic, Qaru uses projectiles and attacks with its wings, Pancho uses his mighty fists and the power of music, and Nayra defeats its enemies with a spear and a charming snake.


You’ll control your character with the left analog stick or the D-Pad, jumping with the X button – which is also used for interacting with other characters or with objects – and evading incoming attacks with the Circle button. The Square button will be used for basic attacks, while the Triangle button will trigger magic attacks. You can launch enemies with the R1 button, setting them up for a combo. If you’ve managed to charge up your super attack, just press the touchpad, and you’ll be ready to go! 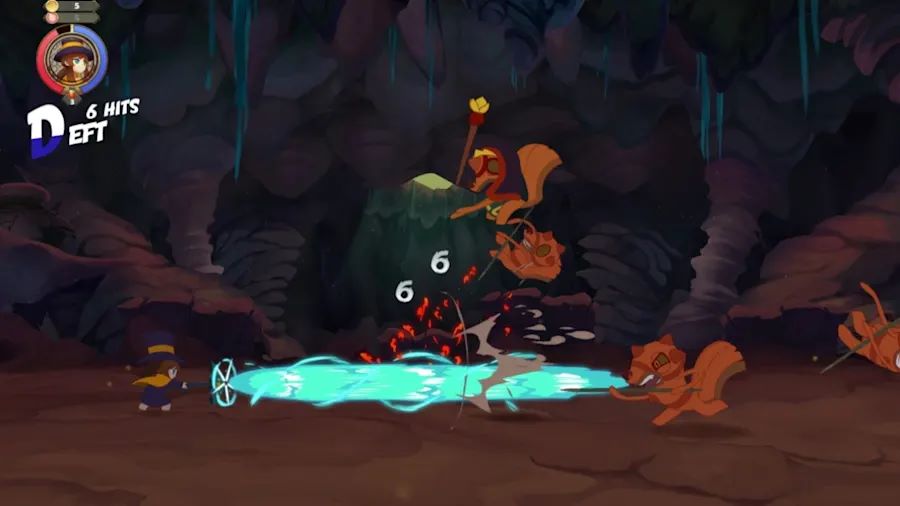 If you’ve played a game with roguelike elements, you know that it means that you won’t be able to play the game from start to finish in one sitting after booting it up. Death is part of the equation, and when you’re defeated in battle, you’ll be sent back to the campsite to learn from your mistakes, reevaluate your strategy, and use what you’ve earned during your run to improve your characters. You can unlock new moves or increase a character’s stats to make subsequent runs easier, bringing you closer and closer to eventually being able to reach the final boss: Tunche itself.


There are four different in-game currencies for you to keep track of. Shards are used to boost cores, which will, in turn, boost your character when collected for each run. Shards as resources are shared between the group. Entropy is obtained as you win every encounter and can be used to unlock the Fountain of Healing and the Altar of Restoration, which can be unlocked to add them to the room types you can find during a run. Gold is obtained after every room you complete, and it can be used to purchase items. Essences are also important since they’re used for boosting your character. 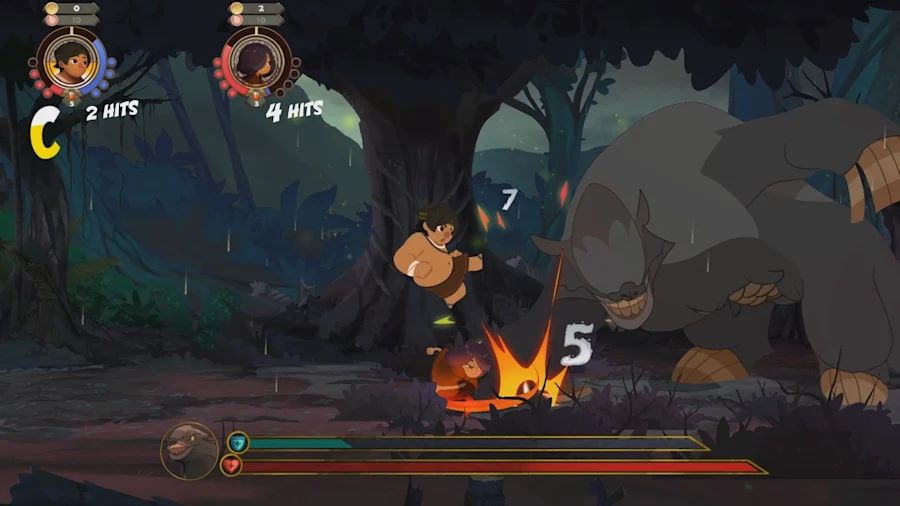 Cores are available in one of four colors: red, blue, yellow, and purple. Depending on their color and type, they will have a different effect on your characters. You could get lucky and find a red core that can revive you when you lose all of your health. Or maybe there’s a purple core in your future that allows you to have your attacks deal poison to your enemies, chipping away at their health little by little. And if you find a blue core that increases your character’s movement and attack speed.


Combos are going to be a big part of your experience. The better your combos, the more resources you’ll obtain, which will, in turn, allow you to improve your odds of increasing the length of your runs. Combos will start at D and go up to C, B, A, S, SS, and then SSS, which is the best grade. To improve your combo, you must continuously attack enemies without being hit. Hit them on the ground, send them up in the air, and then continue juggling them with air attacks. The more enemies in a group, the easier it will be to increase your combo grade, as long as you know how to stay alive.: 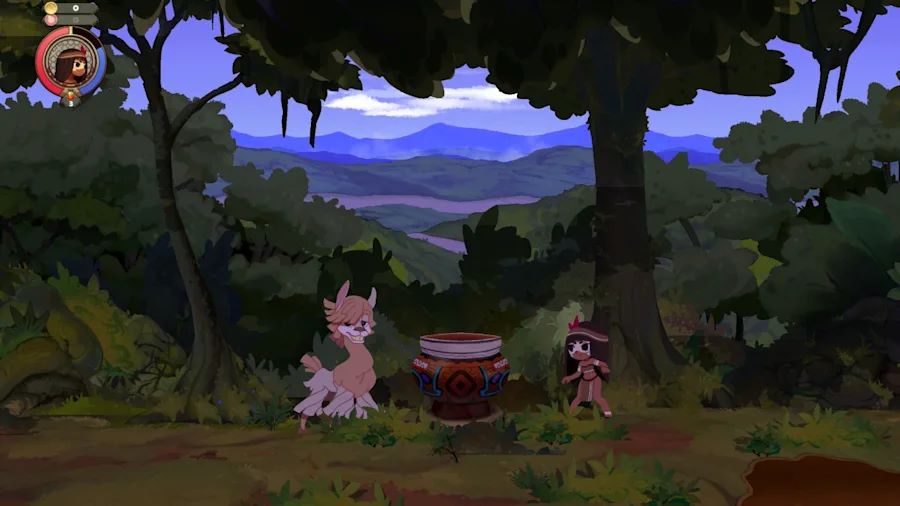 The game has a full trophy list with a Platinum for you to add to your collection, and it won’t be an easy list to complete. There are 11 Bronze trophies, 9 Silver trophies, and 6 Gold trophies to unlock. The objectives to complete are varied, requiring that you unlock 30 Compendium entries, read all four of the story chapters for each character, reach an SSS stylish grade for your fighting, purchase all skills for one character, defeat every enemy type at least once, defeat each of the bosses in the game, obtain a spirit core, or talk with everyone at the campsite at least once, to name some examples.

Tunche is a gorgeous beat ’em up with fun gameplay mechanics and a solid gameplay loop. It might feel a bit overwhelming at the start, especially if you’re playing on your own and are new to beat ’em ups and what one with roguelike elements does to change things up. There’s plenty of content to enjoy and a trophy list to work on as you aim to add a new Platinum trophy to your count. Tunche is out on PlayStation 4 at a $19.99 price. 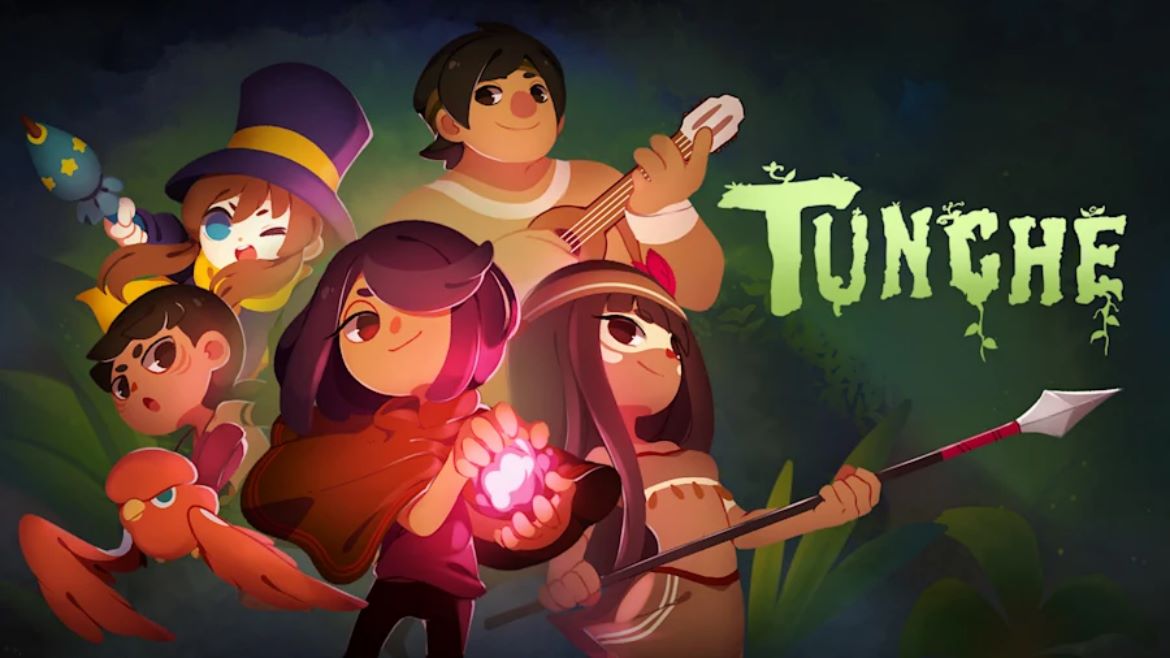 Gorgeous and fun beat 'em up with a roguelike twist

Disclaimer
This Tunche review is based on a PlayStation 4 copy provided by Hypetrain Digital.