Shadow Man: Remastered from Nightdive Studios and Valiant Comics is a revamped take on the 1999 classic based on the Shadow Man comic book, now ready to go on PS4. After giving us excellent new takes on Strife: Veteran Edition, as well as Powerslave Exhumed, this time around, Nightdive Studios is taking us on a trip back a bit over two decades to give Shadow Man a new chance to shine in a new console generation. This is an excellent way to experience the game both for those of you who got a chance to take it for a spin back when it was released on the Nintendo 64, the original PlayStation, and the beloved Dreamcast. 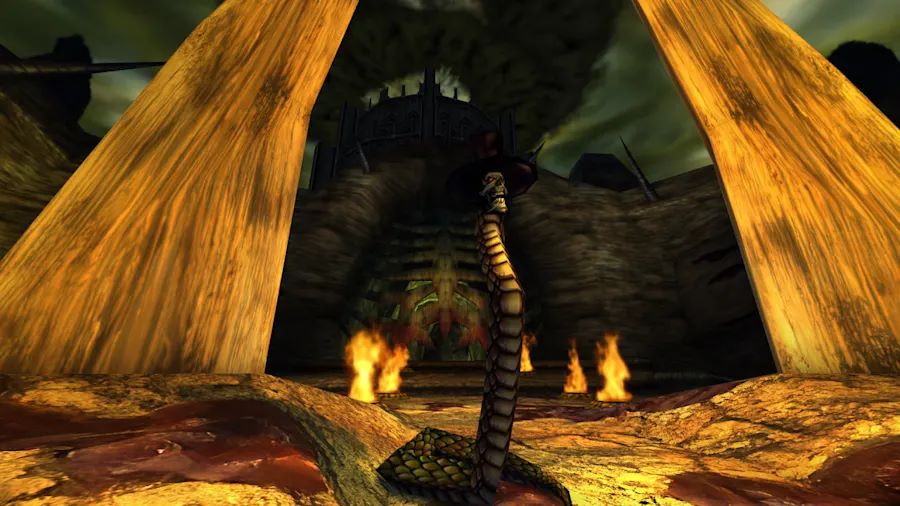 What are we getting for this new version of Shadow Man on PlayStation 4 – playable on PlayStation 5 by way of its backward compatibility – to earn it the Remastered in its name? Well, there’s support for 4K widescreen, dynamic shadow mapping, dynamic per-pixel lighting, antialiasing and additional post-process effects, higher density of particle effects, refined art, audio, and assets, refined gameplay experience, and HRD rendering. And then, there’s the big one: content that was cut from the original game has now been added to Shadow Man: Remastered! That means not only new stages to play (Summer Camp, Florida – Day and Night, Salvage Yard, Mojave Desert – Day and Night -, and Asylum Station 2 – Experimentation Rooms – as well as new audio from original games composer Tim Haywood, but also new enemies, new weapons, and restored voiced dialogue.


Your journey will begin by way of a cutscene in which you see that Jack the Ripper is preparing to perform a ritual upon himself after all of his ritualistic murders did not end up unlocking the mystical power he seeks. He’s stopped by a man named Legion, who tells Jack that he can help him gain the power he seeks if he manages to build an insane asylum for like-minded killers. He needs to build it in Deadside, the land of the dead, so it’s after this that Jack ends up committing suicide. 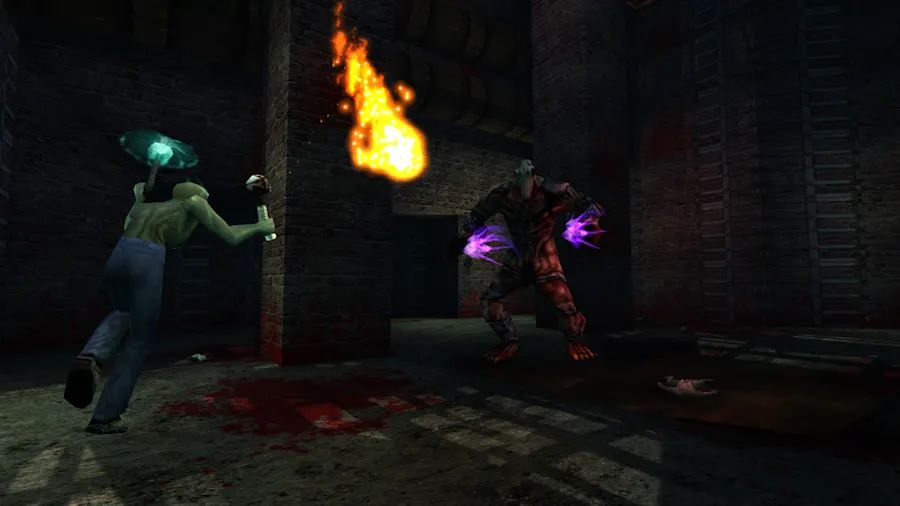 You’ll play as Michael LeRoi, who is the current Shadow Man. He’s part of a long line of voodoo warriors tasked with protecting the world of the living – Liveside – from those who cross over from Deadside – a.k.a. its counterpart. He’s the new Shadow Man, thanks to a ritual performed by Mama Nettie by which the Mask of Shadows was bonded to him. Mama Nettie knows that Legion is preparing to bring the apocalypse to Liveside by harnessing the power of the Dark Souls. As expected, you must use your power as Shadow Man to put a stop to Legion’s plan before it’s too late.


The game was part of the early 3D console games from “back in the day,” which means that it has what we have come to affectively refer to as tanks controls. If you played the original Resident Evil when it launched on PlayStation in 1996, then you probably have an idea of how Shadow Man was controlled in 1999. The good news is that it’s now 2022, and that means that for this PlayStation 4 re-release, the controls have been overhauled, making it feel more like a third-person game from this century.

You’ll control Shadow Man with the left analog stick, moving the camera around with the right one. Shadow Man can jump with the X button. If you ever need to crouch, just press the Circle button. You’ll use whatever your character has on his left and right hands by using the L2 and R2 buttons, respectively. Press the Square button, and you’ll gain access to the weapon wheel. Actions are performed with the Triangle button. You can review your inventory by pressing the Touchpad on the DualShock 4. 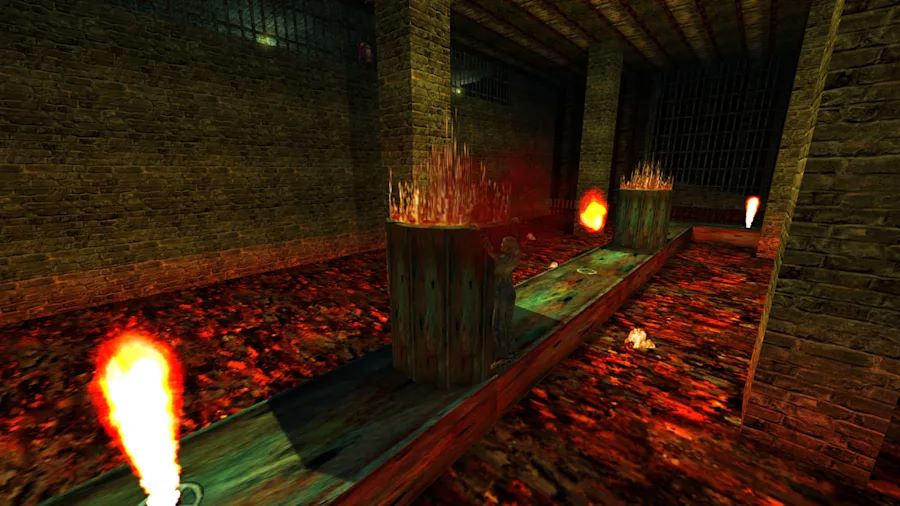 Shadow Man has no powers while in Liveside, so you’ll have to rely on things such as the handgun you get early in the game after visiting Nettie. But once you make the journey to Deadside, he’ll grow stronger. Take, for example, something as simple as climbing up a ledge. While in Liveside, he’ll have to use both hands and really make an effort to pull himself up. When on Deadside, he’ll grab with one hand and instantly pull himself up. The handgun will be able to damage those in Deadside so that you can free their souls and harvest their energy to heal your wounds. Press and hold down the L2 or R2 button for your handgun, and you’ll charge up your weapon so that you can unleash a more powerful shot. While in Liveside, he’s human, which means he can’t stay underwater for too long, or he’ll drown. When in Deadside, he can stay underwater for as long as he pleases.

You can find a ton of collectibles as you explore each area in Shadow Man: Remastered. There are hundreds of Cadeaux – red ceremonial pots – hidden everywhere, so be sure to break every pot, dive into every body of water, check behind every wall, burn anything that is flammable, and search low and high, so that you can find as many as possible while reducing the need to backtrack. The Cadeaux will be used as an offering at the life altars you’ll find. There will also be Dark Souls to collect, which will increase Shadow Man’s level. The higher his level, the more Soul Doors you’ll be able to open.


Shadow Man: Remastered has a full trophy list with a Platinum trophy, and there are a lot of things for you to do so that you can unlock the 18 Bronze trophies, 11 Silver trophies, and 4 Gold trophies in this journey. There’s, of course, a trophy for completing the game by beating Legion, but there’s also one for failing during that last fight. Along the way, you’ll unlock trophies for finding each of the special weapons, defeat each of the bosses, acquire each of the special abilities, discover each of the game’s secrets, collect a Dark Soul, open all Soul Gates… oh, and beat the game without dying. You know, the usual. 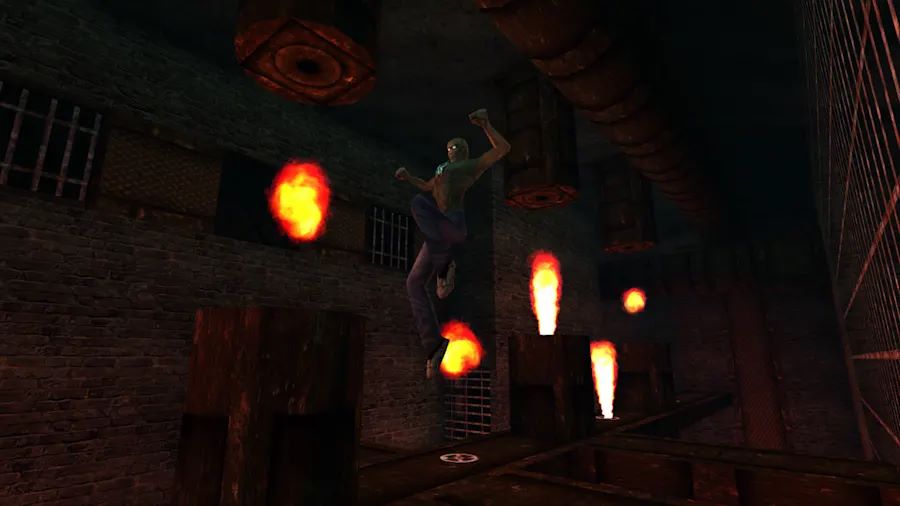 It’s been a while since Shadow Man was released, so odds are you didn’t play it back in the day. While the game does show its age, Shadow Man: Remastered adds several quality-of-life improvements, integrates stages, enemies, and music that was cut from the original release, boosts the framerate and the resolution of all textures, and more. It’s a slow start, with the first hour being a bit confusing since there’s no map for you to use to make it easier to find the path to follow. But once you start to unlock new weapons – and voodoo weapons – and new abilities and take on a boss or two, you’ll start to find your groove. Shadow Man: Remastered is out on PlayStation 4 with a $19.99 asking price. 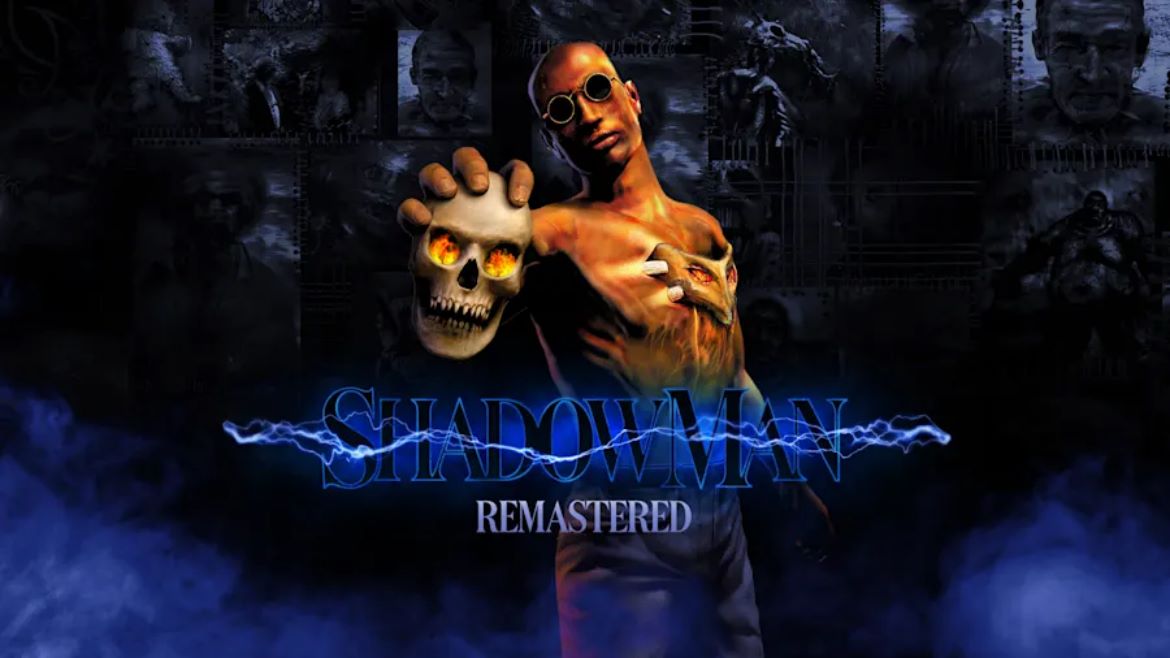 A new chance to experience a classic

Disclaimer
This Shadow Man: Remastered review is based on a PlayStation 4 copy provided by Nightdive Studios.