Fingun from Gamuzumi and Pixelteritaki is a lewd ‘em up on Nintendo Switch that pays homage to Sexy Parodius. Learn more about it in our Fingun review!

Fingun from Gamuzumi and Pixelteritaki is a lewd ‘em up on Nintendo Switch that pays homage to Sexy Parodius. If that game doesn’t ring a bell, it’s a shoot ‘em up that was released in Japan on arcades, the original PlayStation console, and on the Sega Saturn way back in 1996. It’s a shmup that acts as a parody to the main Gradius series from Konami. While previous games in the Parodius series were quirky and bizarre, the fifth installment moves into a bit more risqué territory, with bosses in suggestive poses and lots of innuendoes. 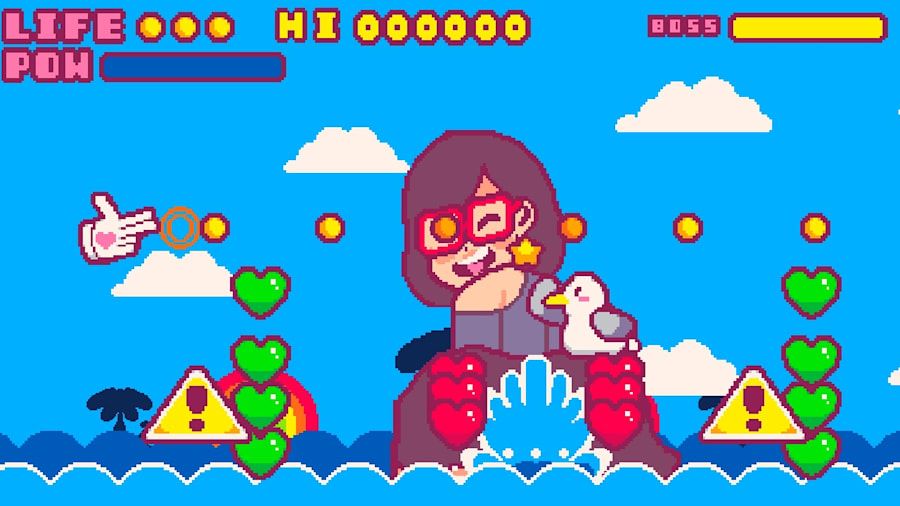 As for the premise for Fingun? The world has been invaded by giant anime girls and their henchmen as they wreak havoc all over the world. The good news is that you have the titular Fingun ship at your disposal, which happens to be the most powerful ship on the planet! You must, therefore, take on this Boss Rush Mode game as you aim to defeat the 14 bosses that range from a giant girl having fun at the beach to a squirrel girl with a gun on her crotch, a humongous foot with a mushroom cap, or a slime-covered warrior.


You can customize your ship before you jump into the action, changing how many fingers the glove-like ship is pointing, changing its color and design, make changes to the graphics used for the shields that can circle around your ship and protect it from enemy fire – from the default sphere to an onigiri, an eyeball, a star, a popsicle, and more – or change the design for the minigun power-up you can collect. The minigun, by default, is set as a miniature model of your ship, but you can switch it to an octopus, a mushroom, a sword, or a slime, to name some examples. 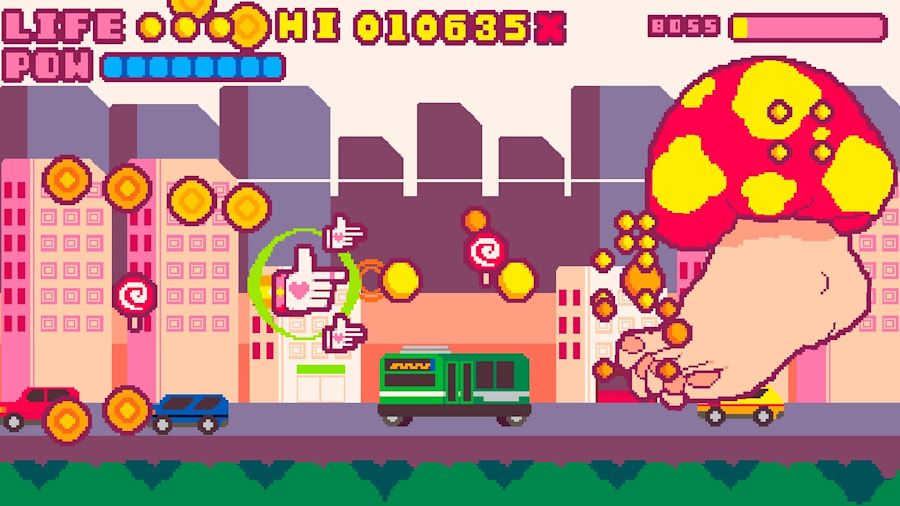 The controls are simple since you’ll only have to worry about moving around the screen with the left analog stick or the D-Pad, shooting with the B button, and flipping your direction with the Y button. As you take on each boss and destroy part of their armor – see, clothing or objects covering them up – you’ll get power-ups that will boost your attack, protect your shield from a hit, and add a minigun to increase how much damage you can deal. Defeat the boss, and you’ll be rewarded with a heart to help you recover one of your lives. When you’re defeated, you’ll have to use one of your continues, and you’ll lose all power-ups you had collected up until that point, which will make that particular boss fight a lot more challenging.


Since a single hit can destroy your ship, there’s going to be a lot of trial and error during our time with Fingun. Each boss will act differently, using new attacks to try and destroy your ship. You’ll have to find the windows of opportunity to attack them while you avoid their attacks, and odds are you’re going to die… a lot. You will get some big warning signs pop up when the boss is going to move over to a specific spot on the screen or when it’s going to use an attack that will take over a larger area of the screen, so be sure to pay attention! 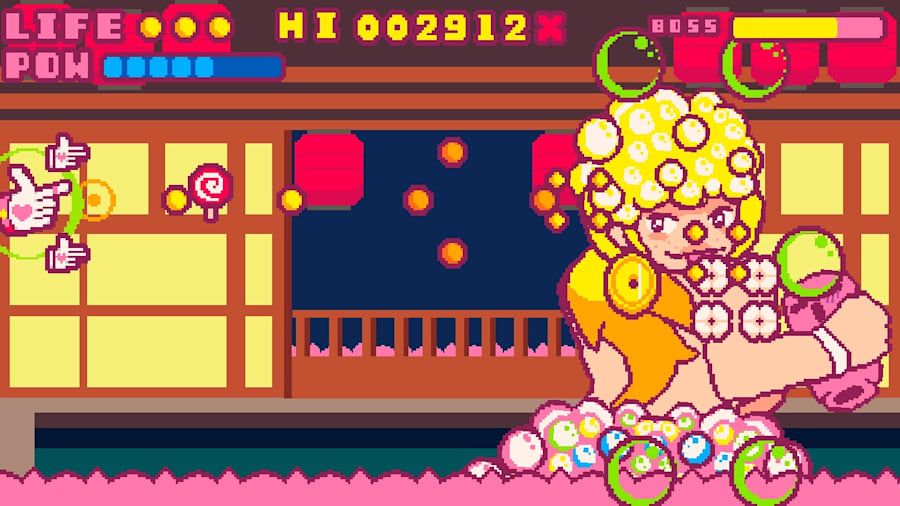 Fingun includes a Gallery section, where you’ll get to view a variety of images that are unlocked as you progress through the game – some lewder than the others. You can also work on completing the eight bonus objectives listed in the Challenges section. These include completing the first stage without dying, reaching the maximum power-up level, collecting 200 coins, clearing a stage with only one life remaining, obtaining at least 24,000 points, clearing stage 4 without flipping, defeating the final boss, and clearing the game without using a continue. 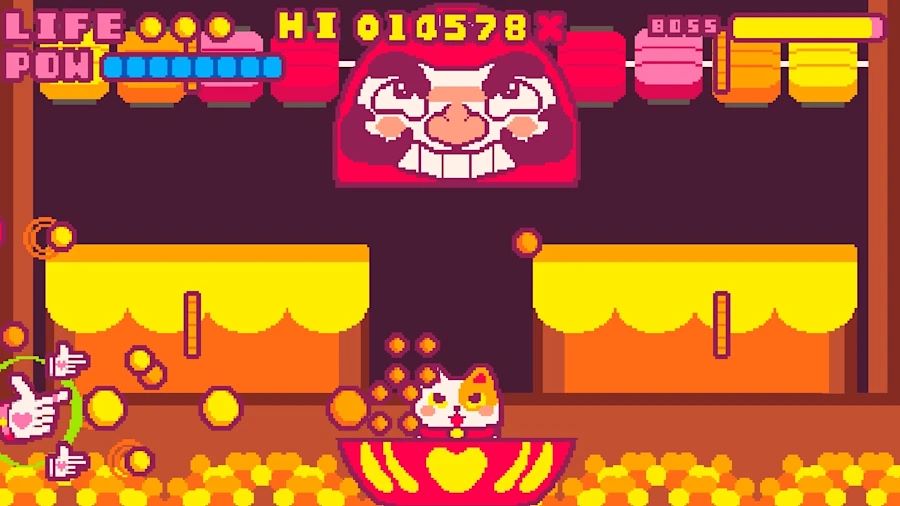 Fingun is a fun shoot ‘em up Boss Rush style experience on Nintendo Switch with a dash of lewd hence its Rated M for Mature rating. While completing the game the first time will probably take you an hour at most, the replay value is in completing all of the objectives in the Challenges section, as you aim at achieving a no continues run. The content makes this one a game that not everyone will enjoy, but the gameplay mechanics do make it an entertaining, bite-sized shmup. Fingun is out on Nintendo Switch with a low $4.99 asking price. 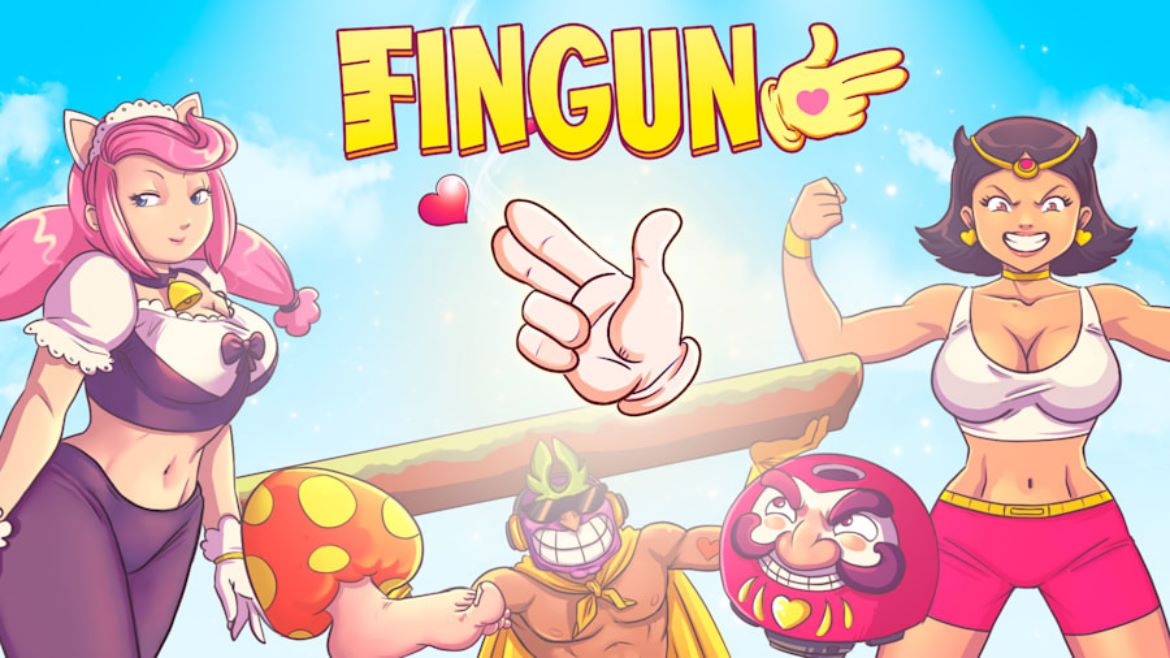 Disclaimer
This Fingun review is based on a Nintendo Switch copy provided by Gamuzumi.