Quest for Infamy from Ratalaika Games and Infamous Quests is a Rated M for Mature point and click adventure game with a dash of RPG elements. Learn more in our Quest for Infamy review!

Quest for Infamy from Ratalaika Games and Infamous Quests is a Rated M for Mature point and click adventure game with a dash of RPG elements. It’s a game that exists today on consoles thanks to the support of over 1,650 backers who way back in 2012 pledged more than $63,000 in funding on a Kickstarter crowdfunding campaign for the game’s development. After launching on Steam in 2014, Ratalaika Games has now ported this point and click adventure game to consoles as a Cross-Buy title on PlayStation 4 and PlayStation 5.

The game tells the story of one Roehm, who at the start of this adventure is trying to have a good time in the Baron’s Daughter’s boudoir, risking his neck for some special time with the lady. Unfortunately, the Baron starts pounding on the door, fully aware of what is going on. Alyssia hurries up Roehm so that he can hopefully manage to escape before her father and his men break through the door. He quickly grabs his boots, kisses Alyssia, and manages to leave as the door crashes down. 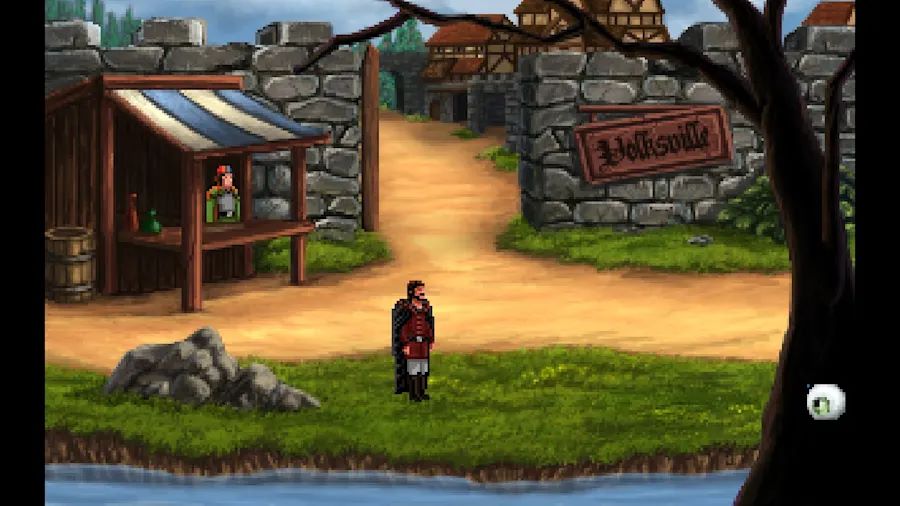 While Roehm believes he’s safe after jumping through a light frame window, it turns out to be a window that leads down to a corridor, so he gets on his feet and makes a mad dash for it while being chased by the Baron’s men. He manages to run through a door that leads to a room with a proper window that leads outside, so he starts to climb down to safety. As soon as he landed on the ground, he turned around and continued to run until he ran out of breath. He tried to slip through town like a ghost, aiming to avoid the Baron’s men who were searching every house behind him.


Before you begin, you’re given a chance to read the game’s instruction booklet, as well as check a quickstart walkthrough. Between the two, you’ll learn all of the basics about the game so that you’re not caught off-guard by the very old-school experience the game has to offer. You’ll learn about the Valley of Krasna in the Kingdom of Lonaria, which serves as the setting for Quest for Infamy. It’s the world of Tahrsein, where magic is very much a thing. As the Lidos moon shines brightly over all during the night, it’s now up to you to help Roehm escape from his fate.

Your first choice will determine the class you’ll see Roehm grow into. There’s the Brigand, who uses pure brawn to solve all of his problems, as he raids caravans and fights with all of his might until there’s no one left standing. You could also decide to take on the life of the Rogue, who uses his skills to “acquire” better gear as it sneaks around the shadows, lurking until it finds the best time to attack its opponents before they even know he’s there. And then, we have the Sorcerer. The Sorcerer must search the world for magical reagents to be able to learn new spells. While it will gain access to a wide range of combat, healing, and boosting spells, it’s the most challenging of the three classes since it won’t improve its skills by way of a guild, as is the case for the first two options. 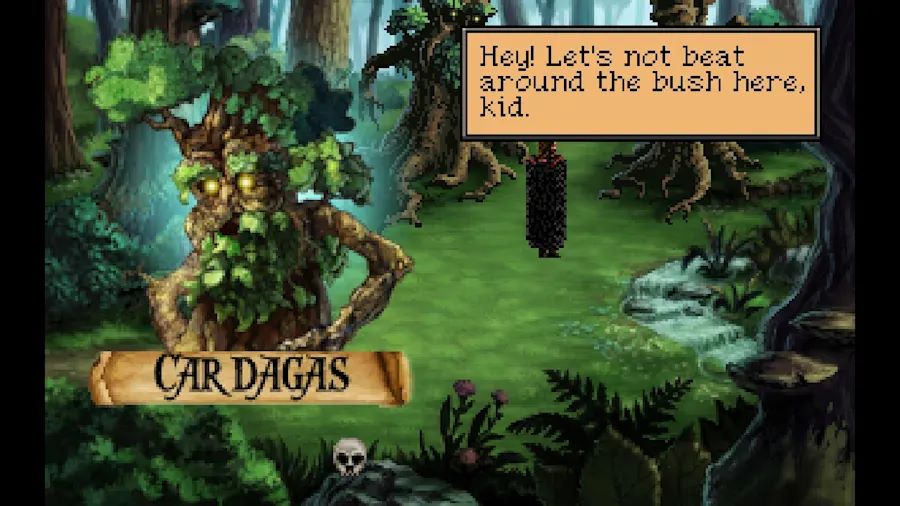 For each class, there will be a mentor that will take Roehm under his wing in order to teach him what is needed to survive in this harsh world. Kurdt is the leader of the Brigands, and Roehm will need to prove his bravery before being allowed to join the guild. Ian is a gambler and a smooth-talking thief, as well as the leader of the Rogues. The last mentor is Prospero, Volksville’s very own sorcerer supreme! As expected, the people in town are not very fond of him due to the dark arts he performs.


You’ll play this one as an old-school point and click adventure game, which means you’ll be using the left analog stick to move a cursor around the screen as you select the right action for each scenario. You can have Roehm walk around the screen, look at an object, character, or scene, interact with something, talk to other characters, use objects from his inventory to interact with other objects or with characters, sneak around, make a run for it, or attack a target and engage in battle if it’s not defeated by your surprise strike.

Combat takes place on a separate screen. This special screen is separated into three areas: Combat, Health Bars, and Attack Bar. The Combat segment will show you attacks and actions as they take place. The Health Bars segment will show you the remaining hit points for Roehm and the enemy. The Attack Ba is where all attacks, defenses, and special moves are located so that you can select from them as needed depending on what you need to do. You can Stab, Hack, or Slash at an enemy, which means Roehm will use its weapon to stab an enemy, to attack it with a vertical attack, or with a horizontal attack. Some are more effective than others depending on the enemy you’re fighting, so be sure to pay attention and adjust your strategy as needed! 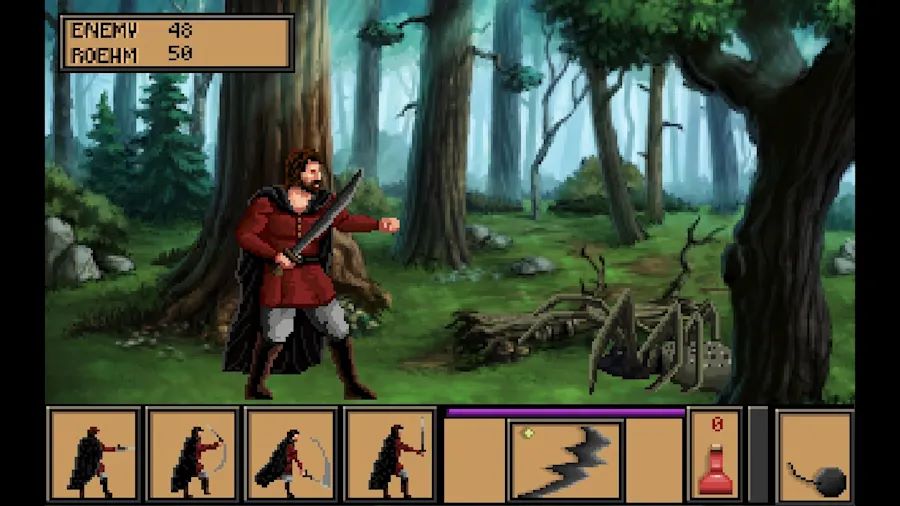 You’ll gain access to some equipment during your time with Quest for Infamy. Swords are very important since they’re going to be your main weapon. Always be sure to equip the new and more powerful swords you find so that you can deal as much damage as possible! Bracers will offer a wide variety of effects depending on their nature. They might increase your hit percentage. They could increase the speed at which a Sorcerer’s spells recharge, or they might allow you to find more loot when searching an enemy’s corpse. There’s also armor to consider, which will increase your defense and lower how much damage you receive in combat.

By progressing through the game, you’ll gain experience points, which will allow you to level up as you boost your stats by way of combat and environmental actions. Do be aware that some stats are class-dependent, so you won’t be able to, for instance, boost your thievery if you’re a Brigand. You can increase your health to get more hit points, increase your hit percentage so that you land successful hits, block to lower the damage received from an enemy’s attack, climb up gates or trees, stealth your way undetected, increase your magical powers when playing as a Sorcerer by using it in combat, or experience a change to your infamy rating, which will change how people react to you.

To recover Roehm’s health, you’ll have the option of resting by sleeping at an inn or by using a tent you can purchase with your hard-earned gold – a tent that ain’t cheap since it costs 500 gold coins! Resting will also change the time of the day, and you can decide to sleep up until a specific time or until the next day. When you enter a new day, some events might be triggered as well! You might also find some healing potions during your adventure, which can help to heal some of Roehm’s wounds as needed when you find yourself in a rather peculiar predicament.


There are good news and bad news for trophy hunters who want to take on Quest for Infamy. The good news is that the game has a full trophy list with a Platinum trophy, with a list split into 28 Bronze trophies, 6 Silver trophies, and 5 Gold trophies. The bad news is that due to how there are three different classes and three different major story paths to take, and a handful of miscellaneous missable trophies, you won’t be able to get all trophies for the game during a single run. 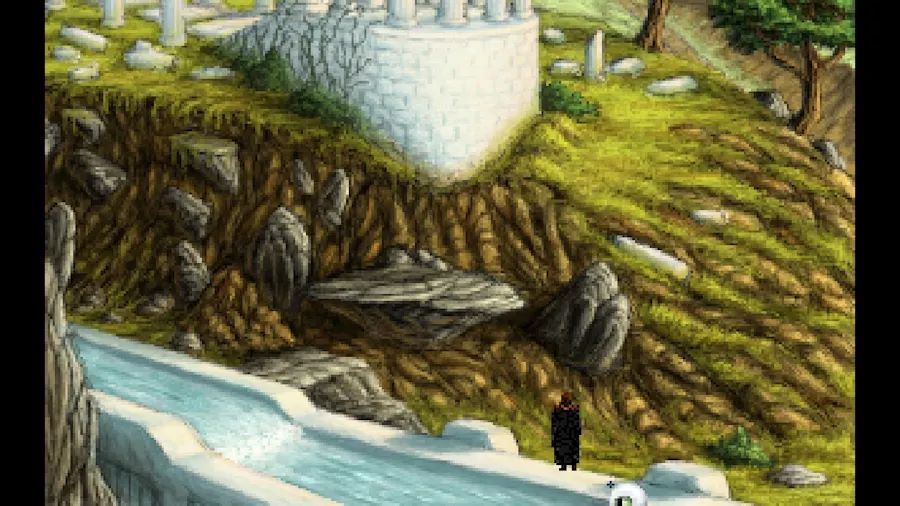 Quest for Infamy is a fun point and click adventure game that pays homage to the old-school classics in the genre while also mixing things up by adding combat and some RPG elements. The game features full voice acting, which is always a plus for a point and click adventure game, and you’ll be spending 12-14 hours playing this one depending on your experience with the genre. Quest for Infamy is out as a Cross-Buy title with a $9.99 price, which will give you access to both the PlayStation 4 and the PlayStation 5 versions of the game. 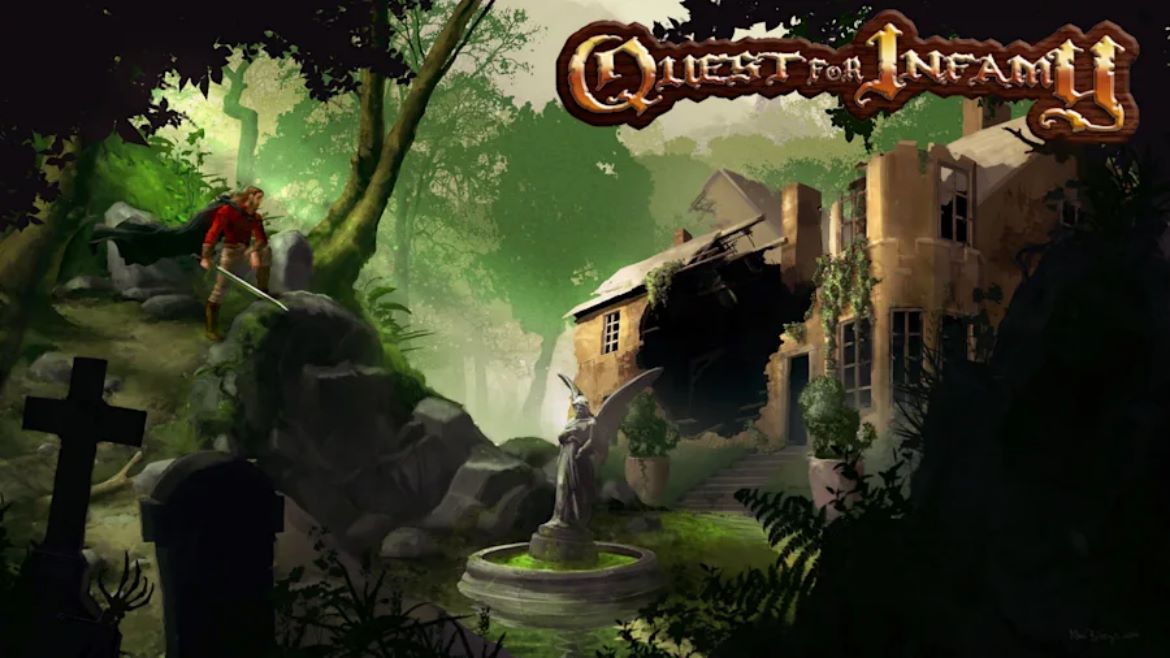 Disclaimer
This Quest for Infamy review is based on a PlayStation 5 copy provided by Ratalaika Games.

Alterborn Out Later This Year On PlayStation 5