Weird West by WolfEye Studios and Devolver Digital is a twin-stick action RPG in a twisted Western setup that ends up providing a rather unique experience. Learn more in our Weird West review! 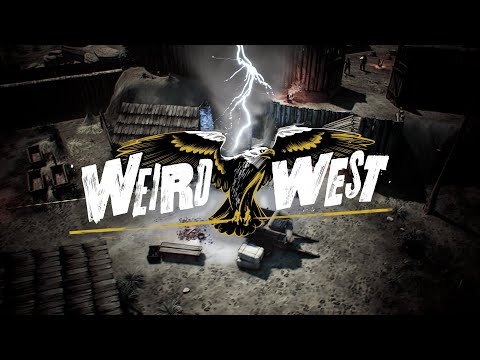 Weird West by WolfEye Studios and Devolver Digital is a twin-stick action RPG in a twisted Western setup that ends up providing a rather unique experience. The story starts with a really brief intro where you see a woman on a chair at the center of a room with five pillars. Each has a picture frame with blacked-out portraits. Someone then marks the person on the chair with a hot iron. After that, you’ll switch to a scene on a farm, where a woman witnesses her boy being killed and her husband being abducted. This woman is Jane Bell, a retired bounty hunter that will end up recovering her equipment, motivated by Sheriff Albright in order to go on the quest to find her husband back. From there, you’ll experience her journey and eventually the journey of the four other portraits as they all connect together in this world. 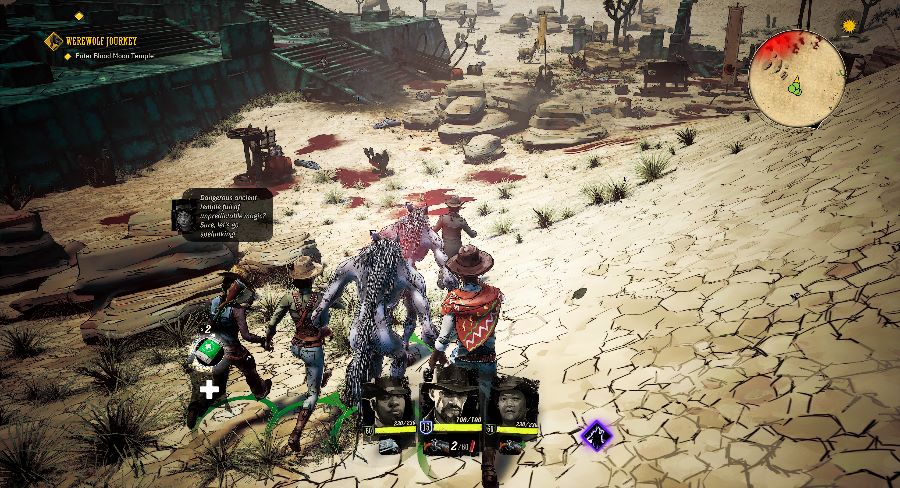 In terms of gameplay, there is a lot to digest as to how the game works, but the tutorials do a good job of introducing everything early in the game. Moving around is done with the left analog stick, while the right one allows you to pan the camera in the isometric perspective the game offers. Holding the L2 button allows you to draw your weapon and changes the right analog stick into aiming mode so that you can point in the direction in which you want to shoot, which is done with the R2 button. The L1 button will be used to change weapons by tapping it to fall back to your previous weapon or by holding it to select from a weapon wheel. The R1 button allows you to use the abilities you will eventually unlock. And since the terrain and height can come into play, you’ll be able to jump using the X button or leap out of the way with the Circle one, while the Triangle button will be used to kick.


On the world map, you can select destinations to visit, and you’ll see your character’s icon move in that direction, which will gradually remove the fog of war as you explore, with potential encounters on your way there. In encounters, or when reaching your destination, no matter if it’s a camp, a city, or another area, you’ll be back to an isometric view. Along the way, you’ll likely discover a lot of places to visit, which can potentially end up being friendly or not. Similar to games like Fallout, there is a reputation system that builds depending on your actions, so individuals, or their clans, have the potential to become friends or foes. And since you can potentially shoot and kill anyone, even story characters, the story and sidequests can go in a lot of different directions! 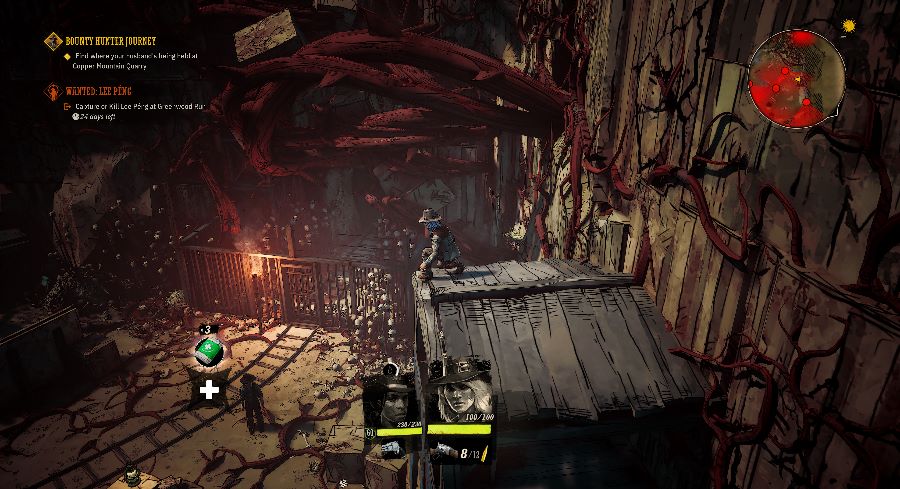 Visually, the game features some detailed environments and characters, and there is a lot of emphasis on how you can interact with a lot of things to trigger traps or distractions to help you along the way. The game’s lore and setup mix the Western setting with mythical creatures such as sirens, werewolves, or even pigmen, making this an interesting experience.


When I started the game, I found myself struggling a little bit, not sure of how much fun I’d be able to have with scarce ammo and an emphasis on saving before you try things out. Then, after a few quests, the world and the similarities between this game and the Fallout series started to grow on me. Everything related to inventory limitations, finding junk to sell for some money, the reputation system that made every decision be carefully thought. It all came together in that twisted version of the Wild West for some really interesting gameplay. I even got to a place at one point that straight up told me to leave because I was a bounty hunter, which I agreed to because I didn’t feel like starting trouble with a bunch of gun-slinging people. 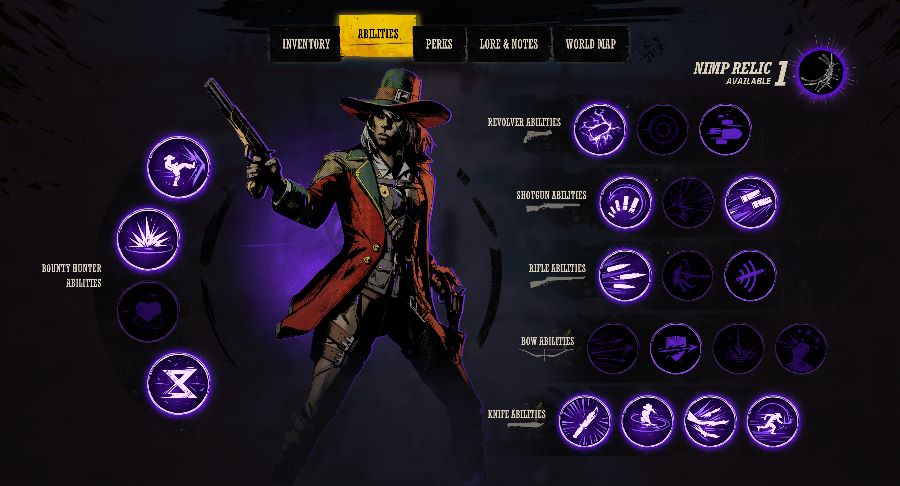 The one thing I found a bit annoying was related to the combat, and I’m not talking about its difficulty since that became less of a problem after completing a handful of quests. It was actually because of how the right analog stick was used both for camera control and for aiming. When in the heat of the action, forgetting to hold the L2 button would simply make me pan the camera, and I ended up losing some precious time that would’ve been better used by shooting at enemies. There was a setting to lock into aiming mode, but it came with a forced camera angle that was even more annoying than forgetting to hold down the L2 button to aim and shoot.


As for the trophies for this PlayStation 4 game, with so many potential choices and actions to do in the game, it won’t be a straightforward trophy run. Some trophies will pop as you progress through the game, but you’re going to have to work hard for the rest of them if you want to have that new shiny Platinum to showcase in your collection! 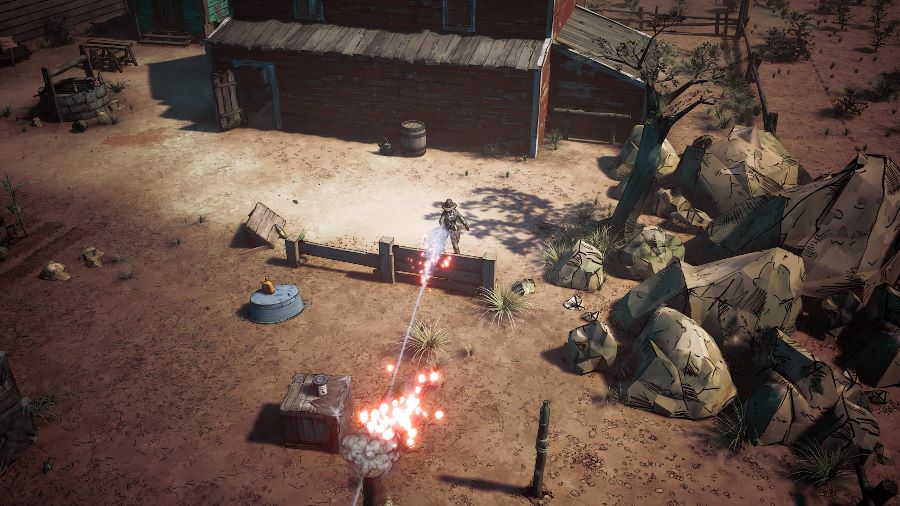 Weird West is a surprising title that comes with a great story and lore and some nice mechanics of different genres to create a rather interesting and satisfying game. Weird West is out today on PlayStation 4 with a $39.99 asking price.

Disclaimer
This Weird West review is based on a PlayStation 4 copy provided by Devolver Digital.

[PS5] The Pizza Delivery Boy Who Saved the World Review