Gem Wizards Tactics from RedDeerGames and Keith Burgun Games is a pixeltastic randomly generated hexagonal tactical game on Nintendo Switch. The Business Demons have stolen the mighty Omni-Gem, and with its magic, they will end up dominating everything! It’s up to the wizards to join forces to stop them before it’s too late. There are four different nations and 26 unique units to command, so there’s definitely something here for everyone. With randomly generated maps to battle on, there are hours and hours of tactical fun to be had. You can play Gem Wizards Tactics in Story Mode, Campaign, or take on custom games. There’s even a Map Editor that allows you to build your own scenarios, which is something you should try once you have some experience under your belt. But before you can dive into the game proper, you’ll first need to play through the tutorial so that you can learn all of the basics and get the hang of things. Since this one has tactics right there in its name, you’re going to have to carefully plan your actions in order to make every decision count! You need to be on high alert and think one step ahead so that you can counter what your opponent sets out to do during its turn.


After selecting one, you can move your units with the left analog stick, move the cursor to where you want to place a unit, and then press the A button to confirm. If a unit on the battlefield has a blue exclamation mark on top of it, that means it’s a unit that can be rescued and added to your cause. Just move right next to it, and it will join your group! To attack an enemy, move one of your units next to it, and confirm your action with the A button. When you’re about to attack, you’ll get a preview of the potential damage you’ll deal, the potential damage your enemy will deal, and the defense for each character. To keep enemies from counterattacking your units so much, you can flank them by moving at least two of your units to opposite sides of an opponent. 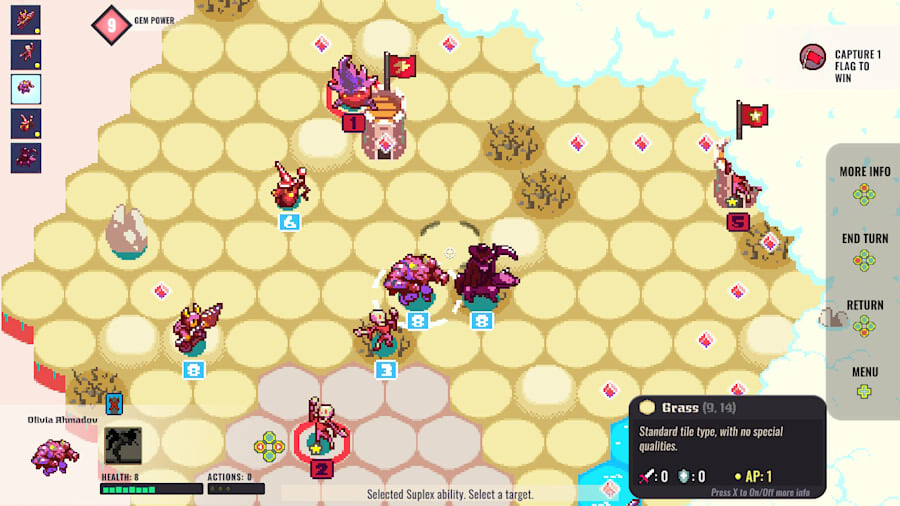 Units will also have special abilities that can turn the tide of battle, either dealing considerable damage to opponents or helping your units by healing some for the damage they’ve received. To balance things out, special abilities will have a cooldown period so that you can’t abuse them. However, if you collect a gem during battle, the cooldown will be immediately over so that you can once again use your special ability right away. Just use the D-Pad to select which ability you’ll use, and then unleash all of its power! This is even more important if there are enemies close to the edge of the battlefield since you can knock them out of the map and instantly defeat them!


Since each unit will have different attack and defense stats, you will need to make the most of each battlefield’s layout to boost said stats while staying away from hexes where your units can get a debuff. For example, if you set a unit inside of a forest hex, its defense will increase. Move a unit on top of a hill, and it will hold the higher ground, boosting its attack. If you, however, have to move over a river hex, you’ll need two action points to do so, and if your unit remains inside of the river hex, its defense will be lowered. While fighting against enemies and defending your group is important, for maps that have castles, you should always try to capture them as fast as possible! Doing this will bring you closer to winning the battle, depending on how many castles you need to capture to clear the stage. Along with this, capturing a castle will also heal some of your squad’s wounds. To capture a castle, one of your units will need to end its turn while on top of it so that it can select the capture command during its next turn.


Even after you’re done with all of the tutorial missions and think you know what you need to do, you should go and take a look at Derby’s Story before you play the Campaign Mode. Derby’s Story is a narrative introduction to the game. It will cast you on the role of one Derby Pocket, an intern who is working for the Business Demons! It will allow you to flex your tactical muscle as you see the conflict from the perspective of the Business Demons – and of Derby in particular – adding some extra context to the Campaign Mode.

As you play gem Wizards Tactics, you’ll gain XP, which is used to unlock new stuff for Gem Wizards Tactics. Every battle that you win will reward you with XP. On top of this, there are new specific quests to complete every day, which will show up on the main menu on the bottom left corner of the screen. By working on the objectives for these, you’ll gain some bonus XP. Level up, and you’ll be able to unlock two additional factions to control, as well as a very special extra Campaign that will feature a special character from Derby’s Story. Gem Wizards Tactics is a pixeltastic randomly generated hexagonal tactical game on Nintendo’s console with a certain charm, a simple gameplay loop, different factions to play as with a good variety of units to control, which will change how you approach each battle depending on what units are available to you – and which ones you rescue on the battlefield. There are also Ranked and Unranked battles and even a Map Editor so that you can create your own scenarios. Gem Wizards Tactics is out on Nintendo Switch with a $14.99 asking price, and 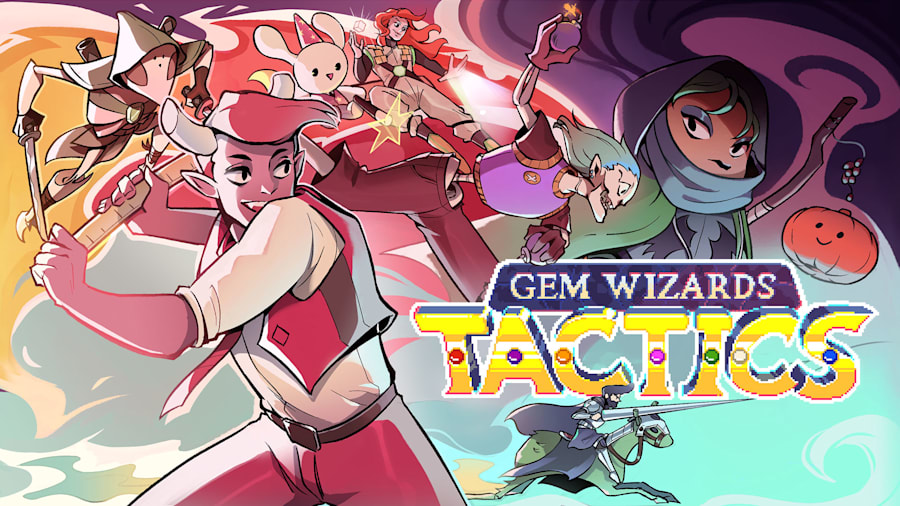 Disclaimer
This Gem Wizards Tactics review is based on a Nintendo Switch copy provided by RedDeerGames.