Uncharted: Legacy of Thieves Collection from Sony Interactive Entertainment and Naughty Dog brings to PlayStation 5 improved and revamped takes of the last two games in the series. The highly anticipated Uncharted 4: A Thief’s End originally launched on PlayStation 4 back in 2016 to critical and fan acclaim, showcasing what Sony’s then still fairly new next-gen console could do, and then some. You might all remember one particular scene that was showcased back during E3 2015. In case you need a refresher, you can check it below.

Uncharted 4: A Thief’s End has you once again taking on the role of beloved treasure hunter Nathan Drake – former treasure hunter to be precise. He’s now retired after the events of Uncharted 3: Drake’s Deception, happily living alongside Elena Fisher. Drake is brought back into the business to work alongside not only his longtime partner Sully but also Sam Drake – that is, his long-lost and presumably dead brother. What follows is an action-packed adventure with more than enough twists and turns to keep you coming back for more.

A little over a year after the release of Uncharted 4: A Thief’s End, we got the standalone expansion Uncharted: The Lost Legacy, which is an interesting release since it’s the first Uncharted game to not feature Nathan Drake as its main protagonist. Instead, you’ll be playing as Chloe Frazer, who was first introduced to the franchise in Uncharted 2: Among Thieves. She is joined by Nadine Rose, who you get to meet during Uncharted 4: A Thief’s End. Chloe is in India searching for the legendary tusk of Ganesh, and as you can imagine, this is not going to be a walk in the park!

Since this is a collection of two PlayStation 4 games that are being revamped and boosted as native PlayStation 5 releases, that means there are several changes to how the games look and feel on Sony’s next-gen console. The resolution for the graphics has been bumped, the lighting has been revamped, and you have three different options for playing the two games in this collection, depending on what your TV can do. If you have a 4K TV, then you might want to go for Fidelity Mode, which offers a 4K resolution at 30 frames per second. Then we have Performance Mode, which lowers the resolution to 1440p while targeting 60 frames per second. The last one is Performance Plus. This is a very interesting one since it lowers the resolution to 1080p while – if your TV can support it – considerably bumping up the framerate to 120 frames per second.

For trophy hunters, I have good news, and I have bad news. The good news is that Uncharted: Legacy of Thieves Collection includes a Platinum trophy for your collection, and if you have PlayStation 4 saves for Uncharted 4: A Thief’s End and Uncharted: The Lost Legacy, you can upload them to the cloud by way of PlayStation Plus or copy them to a USB, and then import them to Uncharted: Legacy of Thieves Collection. This will allow you to carry on from where you left off, or if you have gotten the Platinum for both games, make trophies auto-pop. Do know that the multiplayer gameplay has been removed, and, therefore, the trophies, so you won’t have to worry about that side of things.

The bad news is that some of the trophies might not auto-pop depending on how you got the trophies in the first place, as there seems to be an issue with those obtained by way of chapter select. This is hopefully something that can be patched soon. And now, here’s the proper bad news for trophy hunters: the trophy list for Uncharted: Legacy of Thieves Collection treats Uncharted 4: A Thief’s End as the main game, and Uncharted: The Lost Legacy as DLC for Uncharted 4. Because of this, you have one full trophy list with a Platinum, a huge list of trophies for The Lost Legacy as DLC, no multiplayer trophies, but only the one Platinum.

As for the trophies themselves, there are a ton of trophies related to progressing through the story for Uncharted 4: A Thief’s End and that for Uncharted: The Lost Legacy, along with trophies related to completing the game in Crushing difficulty, finding all treasure and collectibles, opening every lockbox, taking a lot of photos at all photo opportunities, use every gun, defeating a bunch of enemies in specific ways – by using C4, using a stealth takedown, by bling-firing from cover, by firing from the hip, etc. -, getting 30 seconds of total airtime while driving a vehicle, take a photo of Sully, beating a score in a specific retro game, and a lot more. It’s a trophy list that includes a whopping 76 Bronze trophies, 20 Silver trophies, and 4 Gold trophies. Oh, and one of those Gold trophies has a surprising requirement: unlocking all trophies in Uncharted: The Lost Legacy! 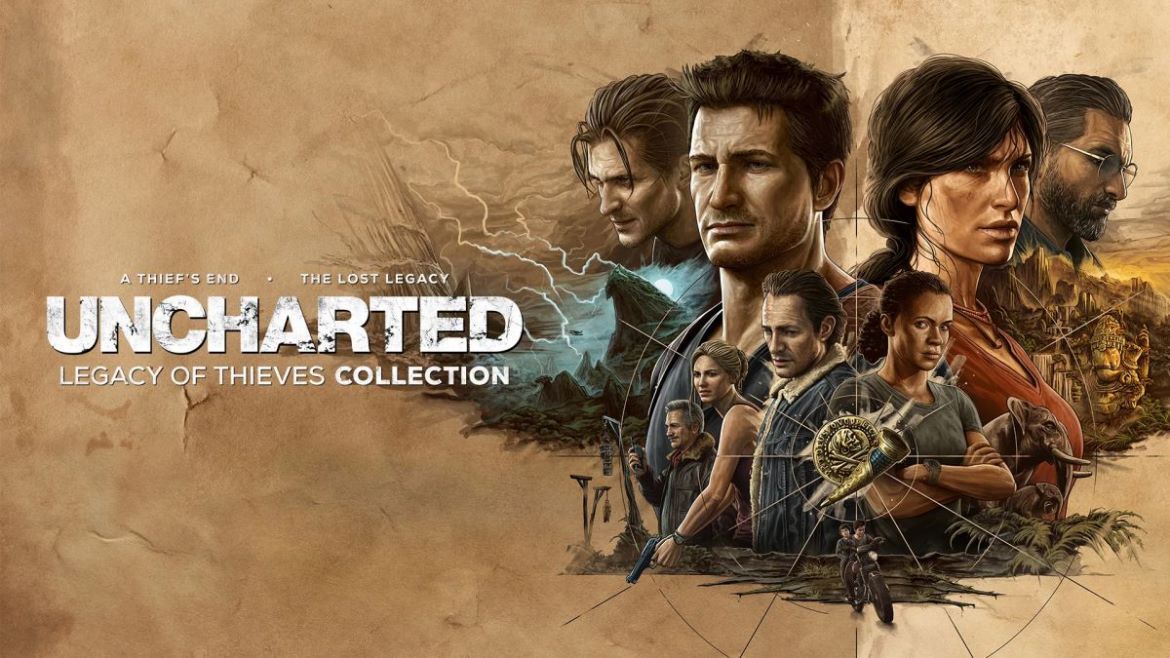 The best way to play Uncharted on PlayStation 5

Disclaimer
This Uncharted: Legacy of Thieves Collection is based on a PlayStation 5 copy provided by Sony Interactive Entertainment.