This is a double review for Cannibal Cuisine. Ceidz and EdEN played the game, and this review presents what they both had to say.

You’ll need to cook, fight and use platforming skills to make it through all 30 levels and finally defeat Hoochooboo in his volcano lair. Of course, the tourists will not be keen to be chopped up, so chances are you have a bit of a fight on your hands. Luckily you can play the game with your friends, so that makes this the perfect chaotic couch party experience for 1-4 players, local or online, co-op or versus!

Cannibal Cuisine from Rocket Vulture and Game Drive has a very weird premise: it’s basically an Overcooked-style release with a cannibal theme. This game is an arcade release with an easy-to-pick-up-and-play experience. There are different game modes available right at the start: the Campaign Mode with enough levels to keep you entertained for a little while, a Versus Mode, and an extension to the main campaign called The Curse of the Scarab King – which EdEN will discuss.

As you begin the game, you’ll have to select each character since this is a 1 to 4 players local co-op (or versus) game. I played most of this review in single-player, and I thought that it felt less passive than the single-player mode of Overcooked. You’ll always have something to do and won’t have to wait for an item to be chopped or grilled in order to get an order going. It’s a non-stop gameplay loop that will keep you always on high alert. 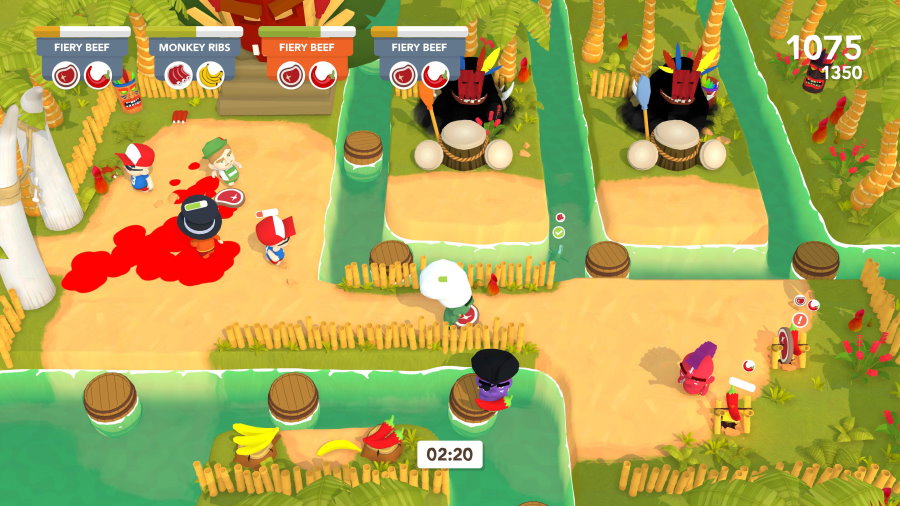 The main objective of each level is to feed the Hoochooboos, a monster that feeds on meat. They are hungry and impatient and will ask for specific dishes that will show up at the top-left corner of the screen with a time limit to deliver them. Of course, being quick and precise, and delivering meals that are perfectly cooked, will reward you with more points. At first, I needed some time to adjust because I thought that the timing was very aggressive, and it definitively didn’t feel like an easy game for you to get a three-star rating on each stage. After each level, you’ll get a result screen detailing how the round went.

As you progress through each level, you’ll discover that tourists can drop different cuts of meat, and the Hoochooboo will often ask for specific ones for their dishes. And as you get further and further into the game, there will eventually be more than one Hoochooboo of different colors, and each one will ask for different dishes, and you’ll have to complete the right recipe for them. After each world is almost completed, you’ll run into a boss level that is harder but still fun.

As for the presentation, the levels are colorful, and the characters have a cartoonish design, which would make this game a friendly experience for younger players… if, you know, you didn’t have to chop up tourists for their meat. I would have liked to play this one in local co-op with my kids, but there’s no option to remove the blood splashes or the chunks of meat that fall after hitting tourists until they fall. 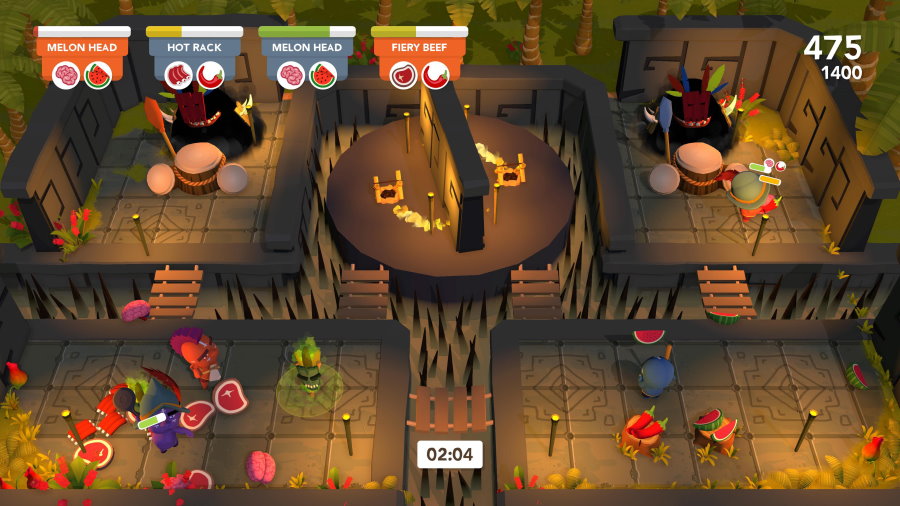 All in all, Cannibal Cuisine is a great multiplayer cooking game with a very different premise since you’ll have to defeat tourists to take their meat, hence the cannibal part of the game’s name. I enjoyed the gameplay and the presentation, and this game is definitively easy to recommend if you want to play a fun party game in local multiplayer.

As Ceidz mentioned, you can play Cannibal Cuisine in Campaign, which is the main Story Mode, take on The Curse of the Scarab King bonus story, or go at it in Versus Mode. I suggest you start with Campaign so that you can get a good feel for how the game plays. Since each stage will require that you complete different objectives while also having a different score requirement for achievement a three-star rating for said stage, you’re going to have to do some trial and error to find what strategy works best so that you can cook the best meal possible.


There’s the option of customizing your character’s looks by changing what hat it will wear – a chef’s hat, perhaps? -, what weapon it will wield (knife, frying pan, axe, bat, staff, battle axe, sword, scimitar, or leaf), the color of your character (the default color, or blue, red, green, and purple), as well as the special ability it will have. Said special abilities will include a stomp that can create a shockwave that dazes and temporarily stuns enemies; totem, which places a totem on the ground that will heal nearby cannibals; fire breath, which spews fire and cooks skewers twice as fast, so you can cook skewers on the ground; or dash, which makes it possible to dash at an extremely fast speed while also crossing small gaps or moats. 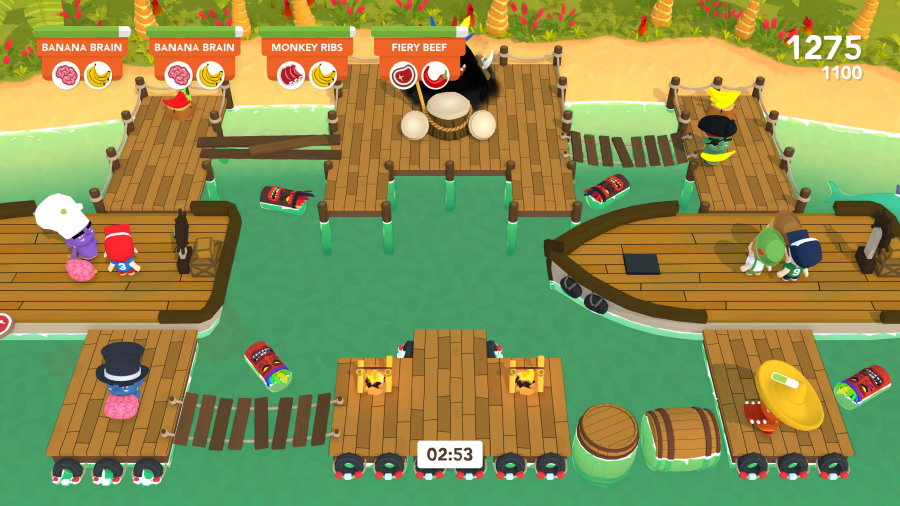 As for the game’s controls? It’s a simple game to play! You’ll move your character with the left analog stick or the D-Pad, attacking with your weapon with the X button. You can grab ingredients and place them on a skewer with the Circle button. Your skill can be activated with the Square button – that would be the aforementioned stomp, fire breath, dash, and totem. The Triangle button is for eating, which will allow you to heal your wounds by eating a juicy piece of meat. Of course, tourists aren’t happy with you being so aggressive and hitting them with your weapon, so as soon as they see what you’re up to, they’ll hit you back and deal damage. Receive enough damage, and you’ll be defeated and will need to wait until your character respawns.

The Curse of the Scarab King section expands on what the game has to offer by giving us five new levels, as well as a new boss to take on. There’s also another twist, since for these stages, instead of chopping tourists, you’ll be busy talking care of mummies! The recipes are similar to those of the main campaign but with new fruits to use. The difficulty is similar to those for the last couple of stages in the main Campaign Mode, so you’re going to have to practice if you want to get a three-star rating in each stage and beat every single level!

You probably also want to learn more about the trophies in Cannibal Cuisine. The game features a full trophy list with a Platinum trophy, and you’ll have to unlock 4 Bronze trophies, 3 Silver trophies, and 10 Gold trophies. You’ll get your first trophy after delivering your first correct order. After this, you might get one for delivering an order with three seconds left on the clock or for serving 20 perfect dishes. If you pick the fire breath skill and cook a meal in full while on the ground, then another trophy will poop. There’s one trophy for getting a three-star rating on every single level, and that’s probably going to be the one that takes you the longest to complete.


We both enjoyed what Cannibal Cuisine has to offer since it pays homage to the Overcooked series while also offering some elements that help it stand out in the hectic arcade-style cooking genre. Cannibal Cuisine is out with a $12.99 asking price. 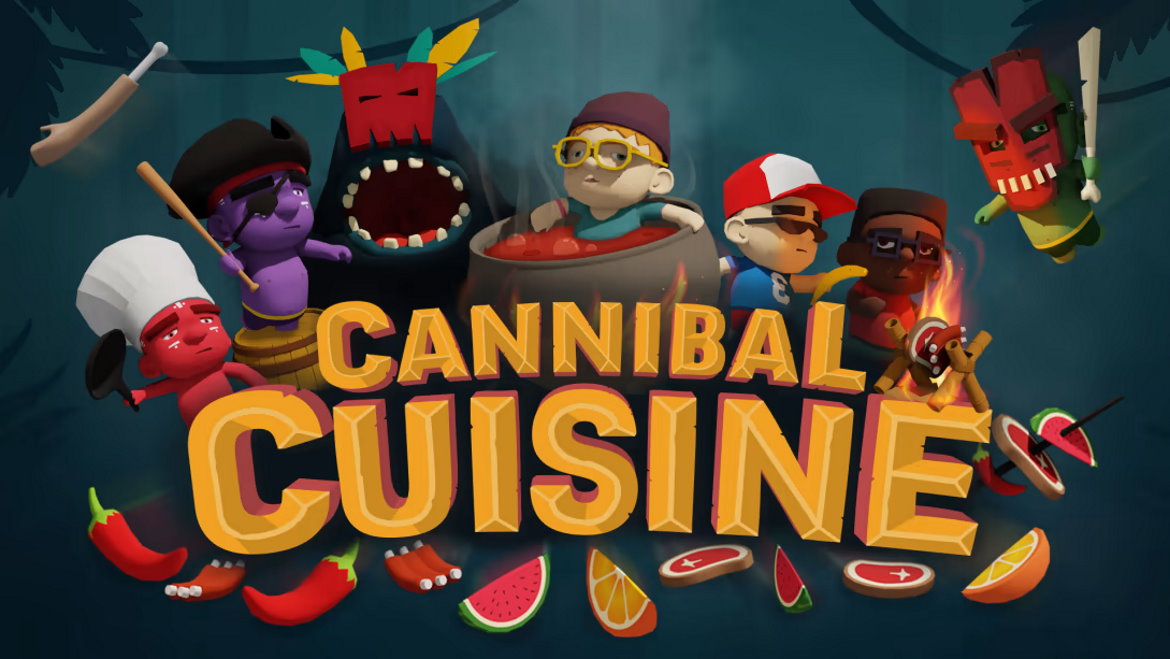 Disclaimer
This Cannibal Cuisine review is based on PlayStation 4 copies provided by Game Drive.