The King of Fighters XV from SNK and Koch Media is ready to rock your world on PlayStation 5. Are you ready to battle? There are 39 characters to choose from, split into 13 teams, but you can mix and match as needed. This was not always the case. If you’re new to the long-running fighting series, you should know it got its start as a Neo-Geo arcade game way back in 1994. The King of Fighters ’94 would act as a huge crossover, bringing together characters from different SNK games and series to fight in a special tournament. The invitations were sent by Rugal Bernstein, a ruthless black market weapons and drugs dealer who wanted to see if anyone in the world could prove to be a match for his skills. He sends out 24 invitations, for what will be a tournament of eight teams of three members each, fighting to represent a nationality.

This, of course, also included characters from proper fighting games. Fatal Fury? Check. Art of Fighting? Check. On top of that, there are also characters from other SNK games and series, such as the titular Athena, or Team Ikari Warriors from the top-down vertical scrolling shooter. There were also original characters introduced in The King of Fighters ’94, such as those from Team American Sports (a.k.a. USA Team), which included Heavy D!, Lucky Glauber, and Brian Battler, each one playing on a sports theme. 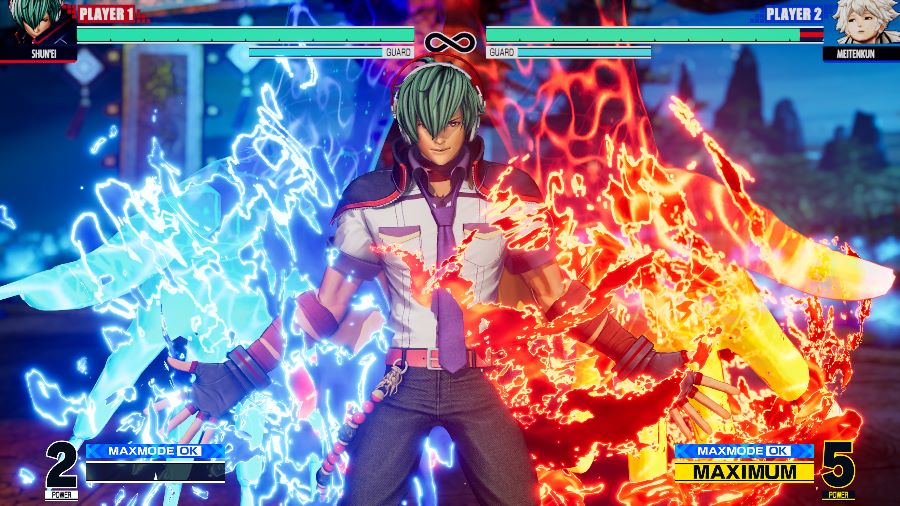 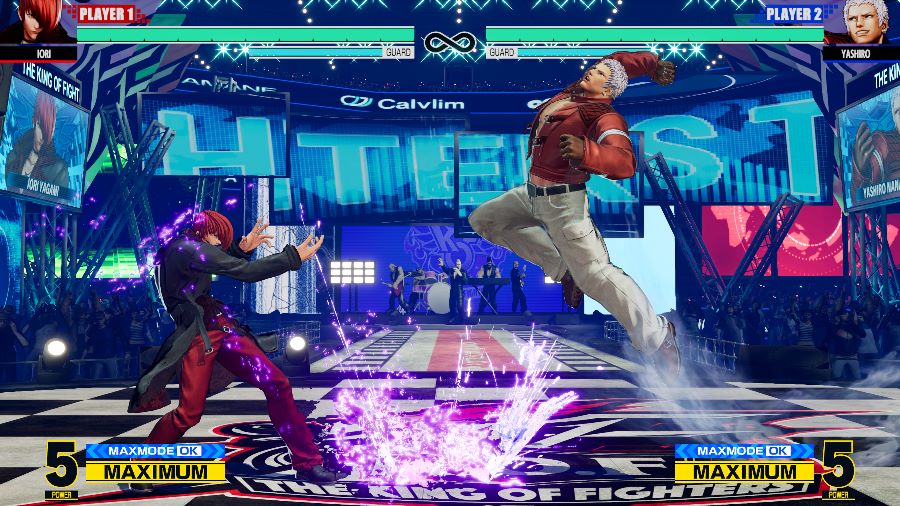 You can take on this new journey either in a local offline Versus Mode, go into Training to practice your combos, skills, and abilities, or dive into Story Mode, where you will fight against CPU controlled opponents to take on The King of Fighters XV story arc. Once you’ve picked the three characters that will be in your team, and right after the latest invitation pops on the screen, introducing Anastasis as this tournament’s host, after Antonov stepped down from said role. One cutscene later, you’ll be ready to select the order in which you’ll control each of your team’s members.

Story Mode will have you going through a series of team battles, with story cutscenes playing between some of them to let you know what has happened before in the series, and what will set this one’s story arc apart from previous games. While the game is fully voice acted, do know that the voices are only available in Japanese. You’ll learn more about some of the fighters depending on what characters you select for your team, and will get to reach specific endings once it’s all over and you defeat the final boss – and no, I won’t be spoiling that here! 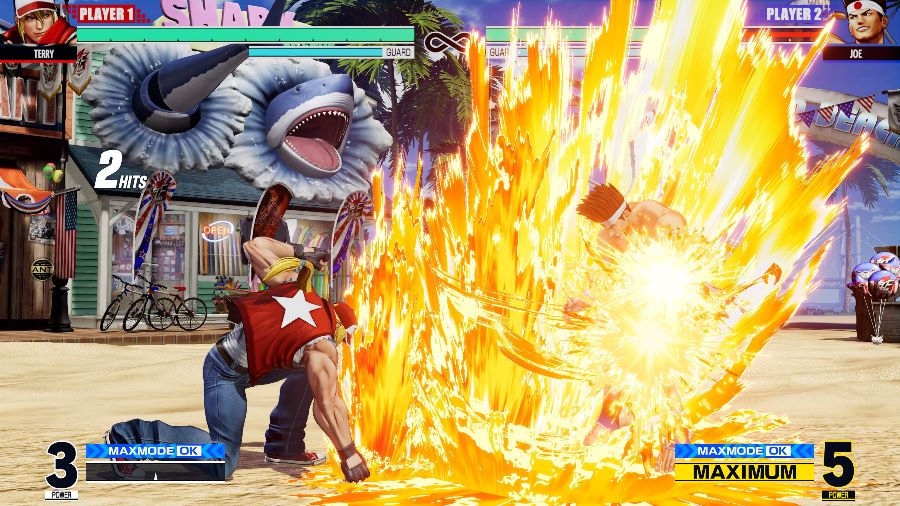 The online side is split into different sections. There’s Ranked Match, where you’ll take on players from around the world as your ranking changes based on your performance. Casual Match is jut that, a regular fight with nothing more than bragging rights at stake. Room Match allows you to create or join rooms with other players, so that you can invite friends or have them invite you over. Online Training will allow you to train your skills with other players. Replay is where you’ll go to check online replays from yourself or others. Profiles shows you your information, or allow you to check that of other players. And then we have the leaderboard, where you can view the rankings for Ranked Match and Story.

And how exactly do you play The King of Fighters XV? If you’re familiar with the fighting game genre, you’ll know games vary on how many buttons are used for attacking, and how you can input specific sequences, followed by a punch or a kick button, to unleash a special attack. As for this PlayStation 5 entry? Light and heavy punches are mapped to the Square and Triangle buttons, with light and heavy kicks set to the X and Circle button. To grab an opponent, go near them and press forward or backward plus the Triangle button. You can do an emergency evasion with the L1 button, and pressing the R2 and L2 buttons will combine pressing both punch and kick buttons, respectively. 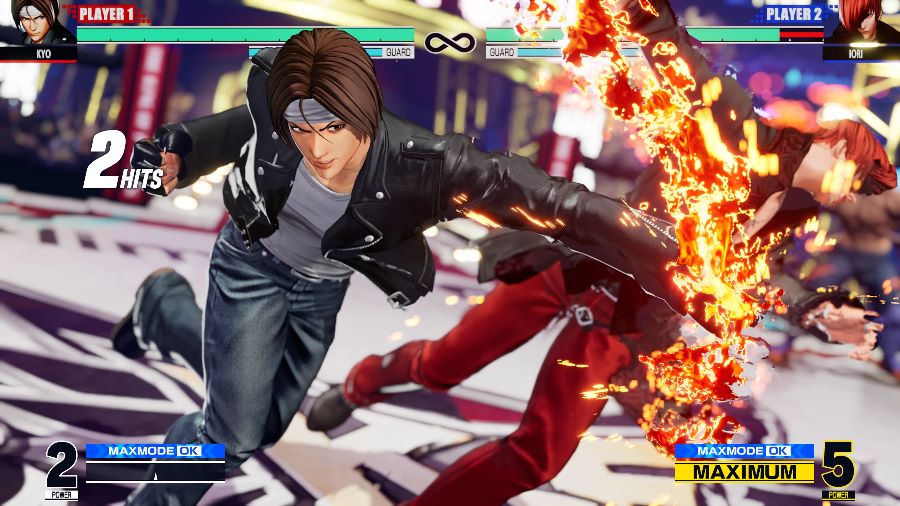 When your bar has filled up a few levels, you can press the R1 button for Max Activation. While in Max Activation, you’ll be able to perform super attacks for a short period of time without using up subsequent energy bars. You can also do this during specific windows to go for a Max Activation (Quick), which shortens how long you can use its extra power, but it can be the difference between dealing a deadly blow and winning the match, or succumbing to your opponent’s cunning counterattack.


Speaking of which, when you do lose a match during your time in Story Mode, you can either go back at it right away, or select some bonuses to make the rematch easier. You could select to start with the power gauge with one full charge, lower your opponent’s life to 75%, combine the two, or go all in and start with a maxed out power gauge, and lower your opponent’s life to 50%. If you want to go into the rematch under the same circumstances, then you can just select the No Service option. 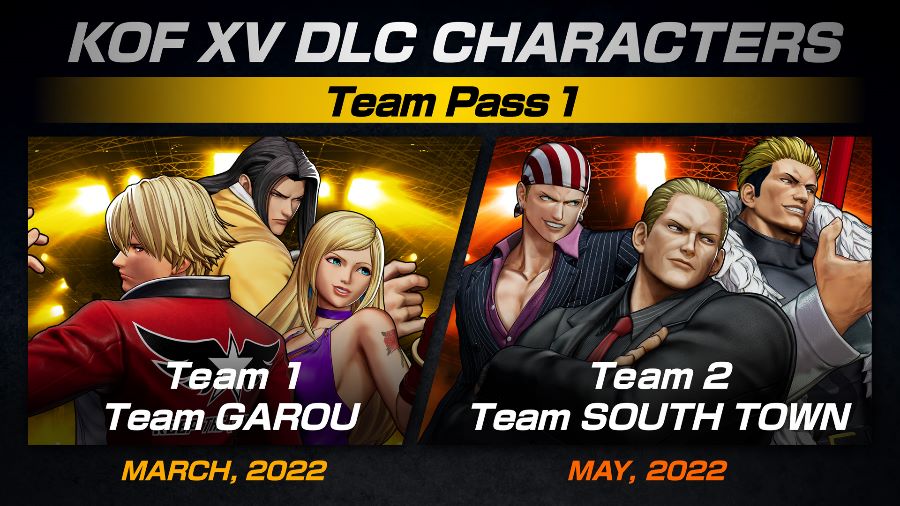 And if you want to boost the number of fighters, you can either purchase each DLC team separately at a $15.99 price, or get the KOF XV Team Pass 1 for $29.99 which includes both. You can get access to Garou Team – Rock Howard, B. Jenet, and Gato – on March, and South Town Team – Geese Howard, Billy Kane, and Ryuji Yamazaki – in May. After that, there will be a KOF XV Team Pass 2 with two announced teams that will release in the summer and fall of 2022. The King of Fighters XV is out on PlayStation 5 on February 17 with a $59.99 asking price. You could also go for the Deluxe Edition, which includes the base game and KOF XV Team Pass 1, saving you $5 in the process.

The King of Fighters XV Review

The sequel we've all been waiting for

Disclaimer
This The King of Fighters XV review is based on a PlayStation 5 copy provided by Koch Media.