Ocean’s Heart by Max Mraz and Nordcurrent is a top-down action RPG that takes inspiration from the classics of the genre. Check our Ocean’s Heart review!


Ocean’s Heart by Max Mraz and Nordcurrent is a top-down action RPG that takes inspiration from the classics of the genre. This means that, yes, there’s certainly a clear influence from the beloved The Legend of Zelda series. The story starts as you wake up in your room. You go down the stairs and talk to your dad, who requests that you go grab a bottle of whisky from the secret stash cavern in the mountains to give to a friend who’s had a rough time. After grabbing your sword from your friend Hazel, you head into the cave to grab the bottle. Right after that, you hear a big sound, and rocks fall down in the cavern, breaking the bridge you had crossed and forcing you to find a way out from deeper in the cavern. Once you finally get out, you notice explosive barrels everywhere and houses on fire, only to learn that the Hourglass pirates attacked your village and kidnapped Hazel! Your father leaves to rescue her, saying he should be back in a week or two. Six months later, you decide to leave to find more about this gang of pirates and bring your father back. 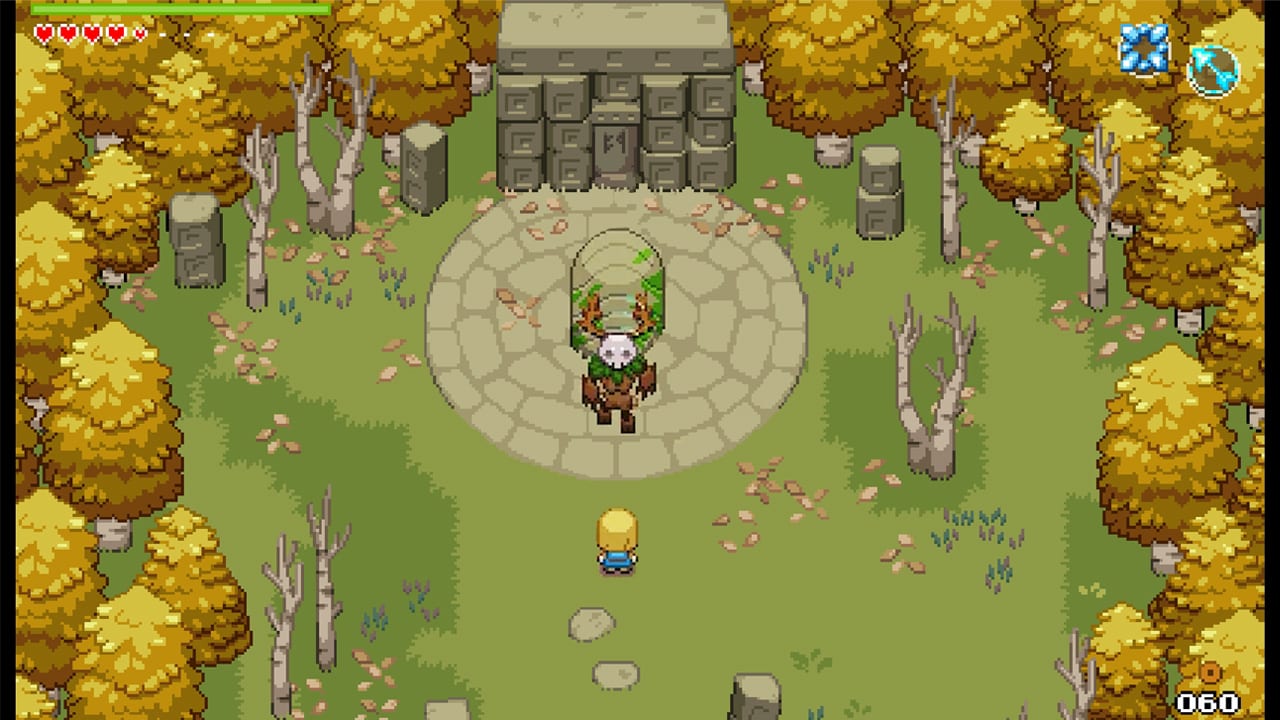 The game is played from a top-down perspective, which should instantly bring back memories of the excellent Super Nintendo Entertainment System game The Legend of Zelda: A Link to the Past. You move your character around with the left analog stick or the D-Pad. The B button is used to attack, while the A button is used for a roll or to interact with objects or people. The X and Y buttons can be used for two different items, like the bombs you find early in the game, that you can swap out as you progress. When exploring villages, you’ll often encounter people that will give you side quests to complete on top of your main objective. Depending on how you explore, some of them will probably be given to you a bit too early for you to be able to complete them, so you’ll have to come back once you’re a bit stronger. Luckily, a girl named Lily will allow you to fast travel around to specific locations to speed things up.


Outside of towns, it will be you against the enemies as you travel from one destination to the other. Some occasional signs will give you hints as to where each direction leads you to, with an emphasis on exploration and discovery. Dungeon areas will typically feature a few rooms that you will have to explore until you reach a boss, with some occasional puzzles to solve. These include having to put something heavy on special tiles to unlock gates or doors or finding the always classic key that you need to finally open a locked door. 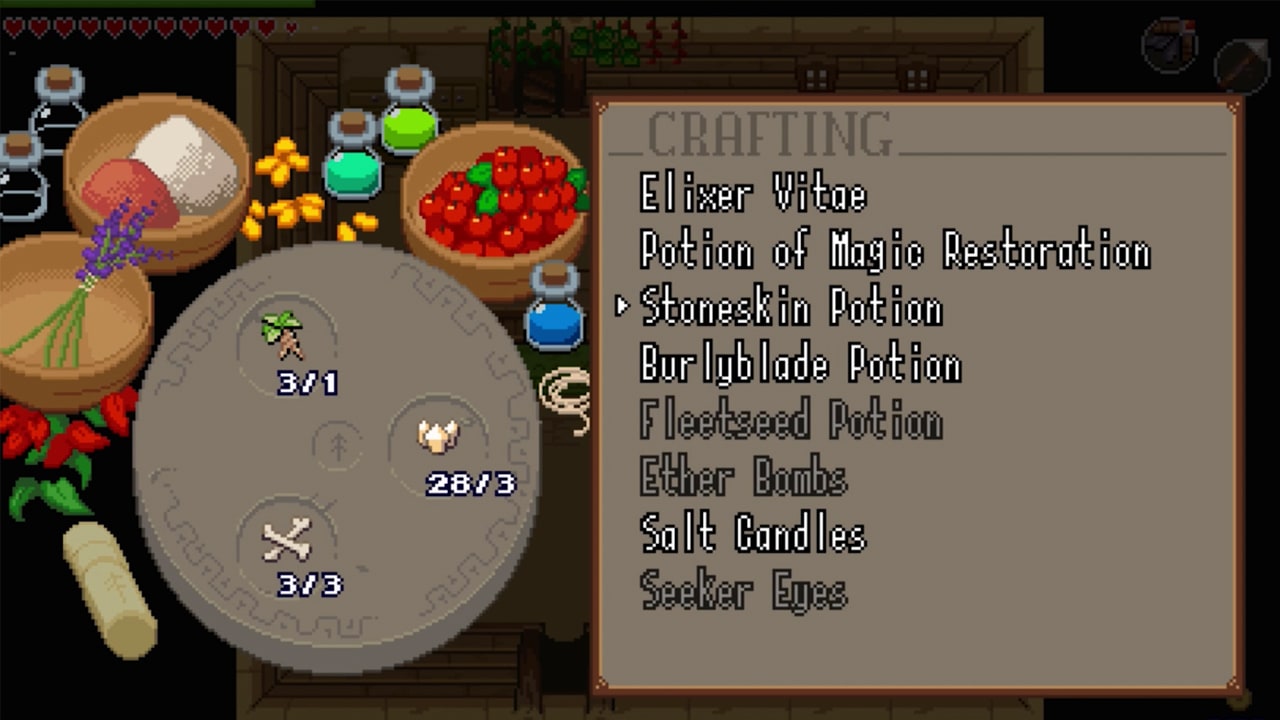 The game’s visuals are probably one of the biggest aspects that have been inspired by The Legend of Zelda franchisee. From the way the sprites are presented to the different animations for your character, such as when you collect something from a chest, everything feels like a great homage to the Zelda series, yet Ocean’s Heart has managed to gain an identity of its own, making it stand out. 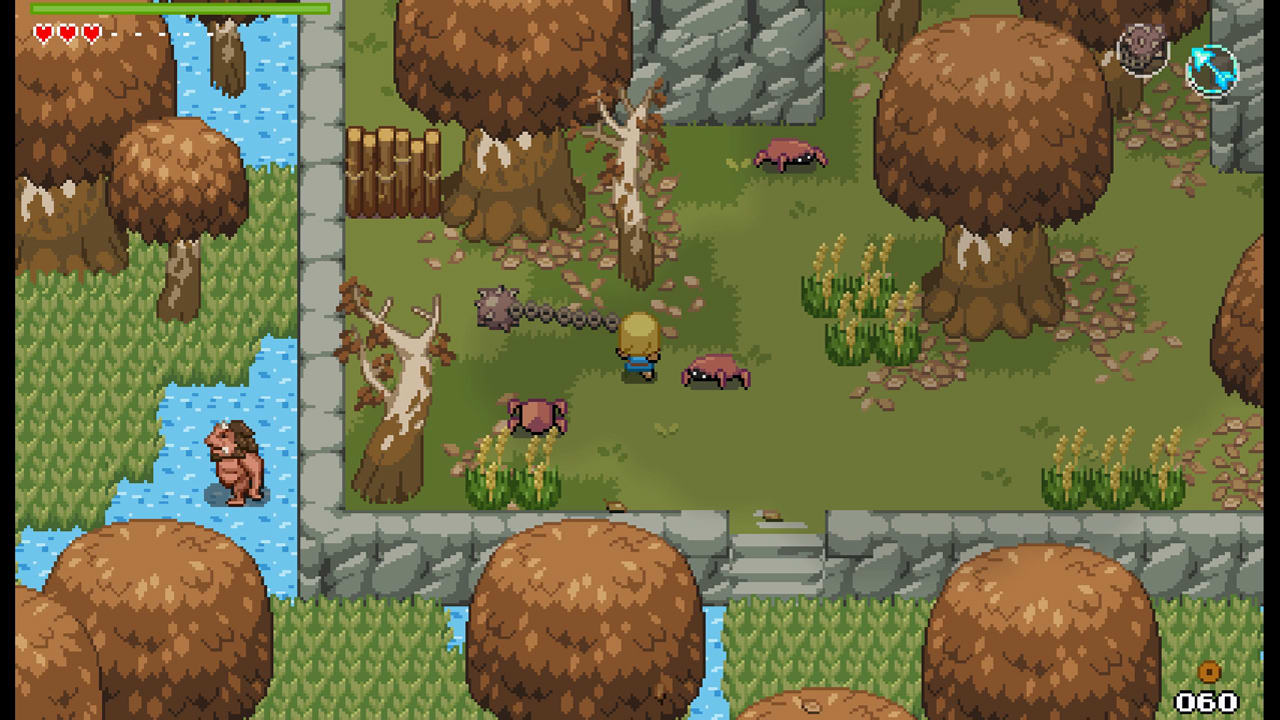 As soon as I started playing this game, muscle memory kicked in, making it a lot easier to understand how the game controls. I really liked how the story only took me so far, hinting at the pirates’ whereabouts so that I could go out to explore without a proper path. This non-linear way of playing is great for top-down games like this, but you do need to remember that you won’t be able to take on every single enemy that you find because your skills and abilities won’t be able to save you. But explore for long enough, find some money and Coral Ore, and you’ll be able to visit merchants to upgrade your gear. 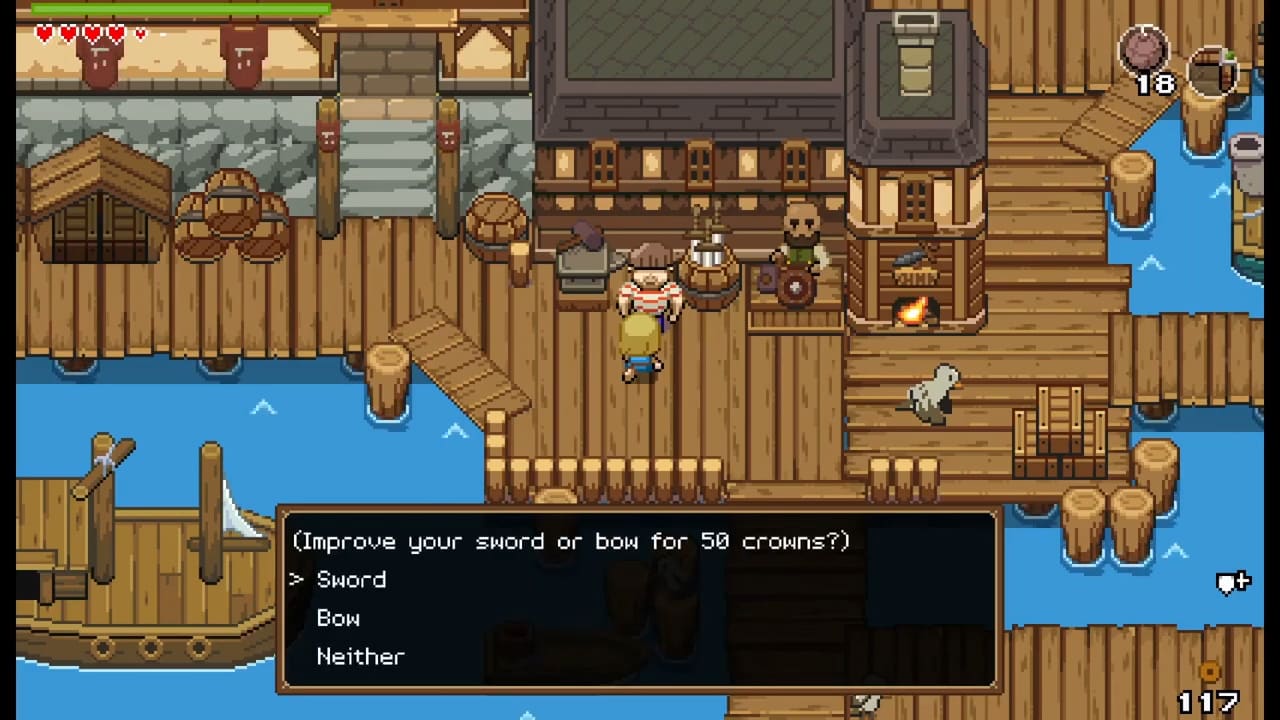 Something I really enjoyed was the variety of enemies. At first, you only encounter a few recurring enemies, but it doesn’t take long before you start seeing more different ones, so it’s great to not have to battle the same ones over and over again. And, of course, the more items you find, the more diverse your attacks can be to fight them, as you uncover new paths to new areas that can bring you closer to your goal. 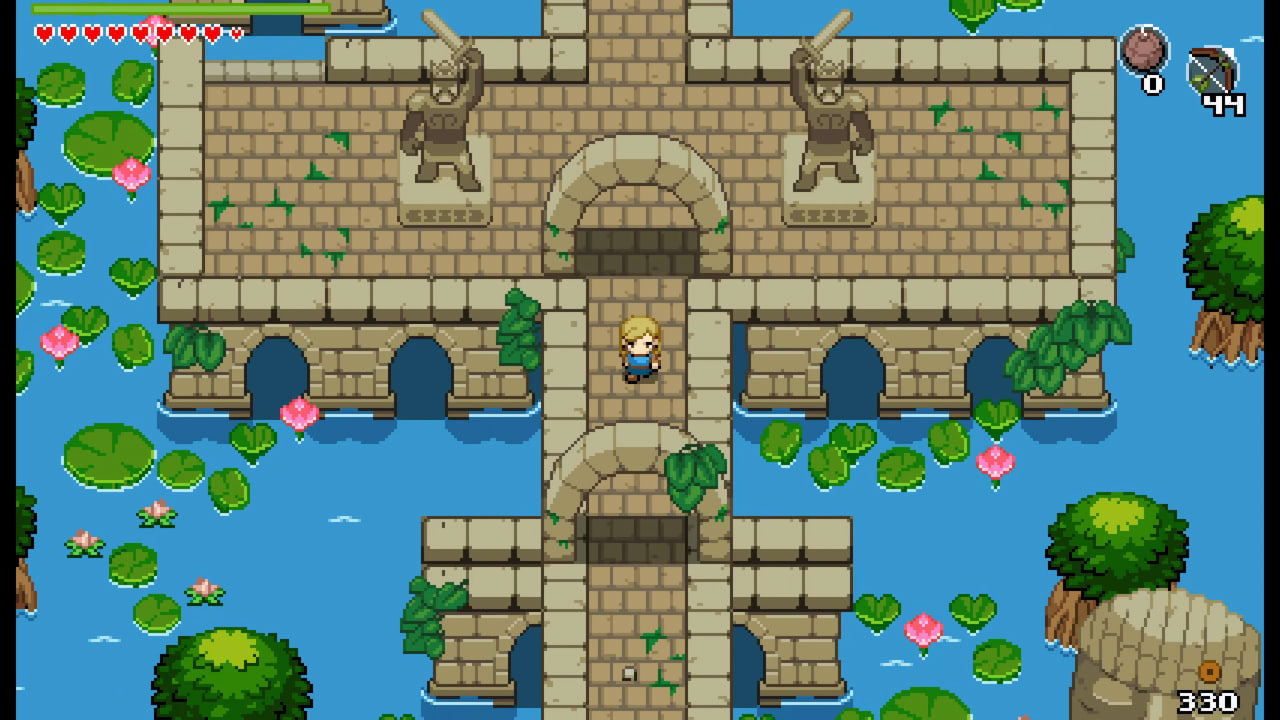 Ocean’s Heart honors classics of the genre while still finding its way to stand as an original title. If top-down action RPGs with a dash of The Legend of Zelda – particularly, A Link to the Past -are your thing, this is definitely one to get on Nintendo’s console. Ocean’s Heart is out today with a $14.99 price. 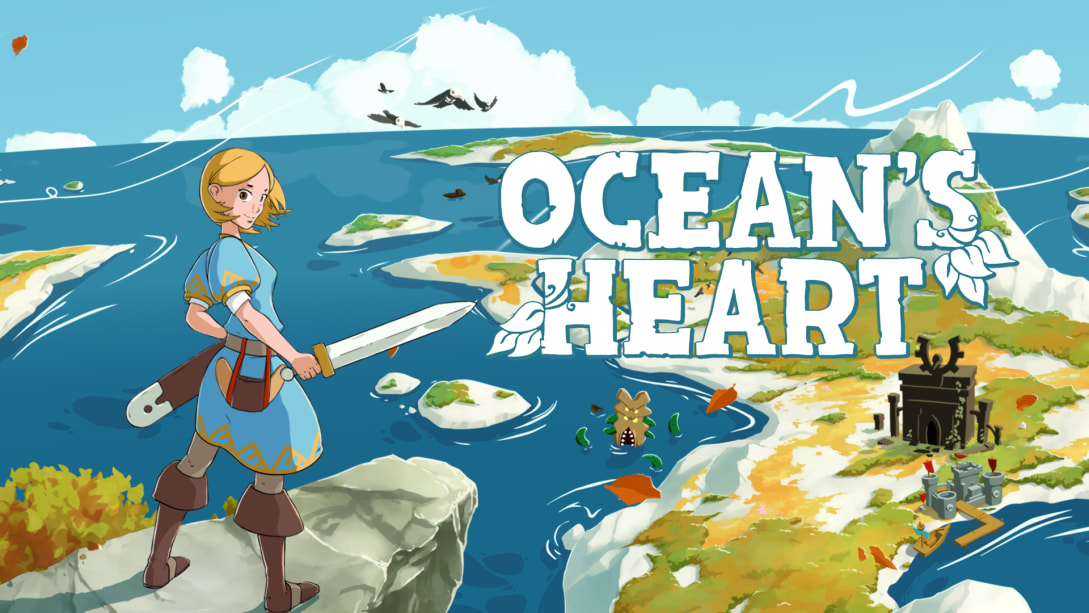 Disclaimer
This Ocean’s Heart review is based on a Nintendo Switch copy provided by Nordcurrent.

Rise Of The Third Power Out On Consoles Today