Aeterna Noctis by Aeternum Game Studios and Sony Interactive Entertainment is a challenging Metroidvania game that puts you in control of the King of Darkness on a quest to regain its powers. Find out more in our Aeterna Noctis review!


Aeterna Noctis feels like a traditional 2D Metroidvania mixed with unique gameplay mechanics never seen before. Taking the role of the ‘King of Darkness’ you must regain your power exploring the vast lands of the world of ‘Aeterna’ across 16 different and connected areas in pure Metroidvania vibe. Frame by frame animation using hand drawn style confers a singular personality to the title, making different each single level and character and also belonging to the Aeterna Noctis universe

Aeterna Noctis by Aeternum Game Studios and Sony Interactive Entertainment is a challenging Metroidvania game that puts you in control of the King of Darkness on a quest to regain its powers. In the beginning, there was only Chaos. He eventually created a world which he named Aeterna, with creatures that lived in peace until corruption started taking place and destroying their world. Out of this was born the factions of Light and Darkness that went to war against each other in an attempt to rule Aeterna. Chaos then decided to curse the leaders of the two factions with immortality, forcing them to fight against each other for eternity. Upon dying, either of them would come back to life on Aeterna, with no more powers, with the sole purpose of regaining their powers to go back to the fight against the other. The game will then begin as you witness the final blow to the King of Darkness as he falls to the ground and stands back up, ready to find the seven fragments of the Shrine of the Kings. 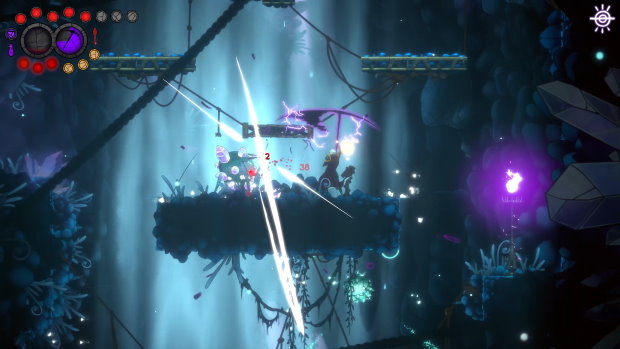 The game is played in a 2D perspective, where you move your character with the left joystick. The right joystick can be used to pan the camera around a little bit so you can see ahead of where you are going. The Cross button is used to jump, while the Square button is used to attack. If you attack while in the air and pressing down, you’ll be able to attack downwards which will also allow you to bounce on specific things. Quickly in the game, you’ll also gain usage of the up arrow to heal yourself, if your potion vial is full, while the left arrow will allow you to fast travel to the last throne you visited (more on that later) if your dimensional vial is full. Being a Metroidvania game, you’ll also be able to unlock new abilities as you progress in the game, as the dash ability.

Speaking of abilities and upgrades, you’ll encounter thrones during your playthrough that you can sit on with the Circle button. Apart from refilling your health points, they will allow you to use earned skill points to upgrade your character as well as add gems on your armor to have additional perks. They will also serve as fast travel points to any of the thrones you previously visited. As you explore the different areas of the game, you’ll be presented with everything you can expect from a Metroidvania. Early in the game, you’ll already be presented to a few different enemy types and you’ll see your typical mix of platforming action too, sometimes in a more challenging way that reminded me a bit of Guacamelee. 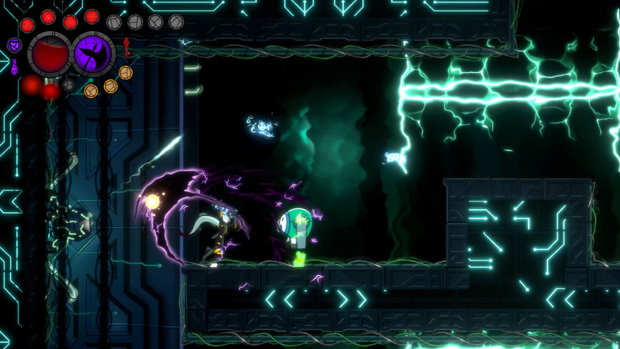 The game’s visuals are one of its greatest successes. It features some incredibly detailed environments that will vary quite a lot depending on which part of Aeterna you are visiting. Some moments there will be things in the foreground that might make it visible to correctly see where you’re heading, but in the end, it does add up to the beauty of the game. The soundtrack that goes with those visuals is also great and features more than 40 tracks overall in the game.

It’s the visuals I saw in previews that got me interested in trying out this Metroidvania, and right from the intro I wasn’t disappointed. The animated introduction was great, levels looked awesome, and I was all into the adventure on Aeterna. Before starting my game, I was given the choice between the two difficulties the game offers. The standard one is more hardcore in terms of difficulty but is the way the game was meant to be played. An easier mode is also available if you’d rather enjoy the story but comes with a catch that I’ll talk about a bit later. 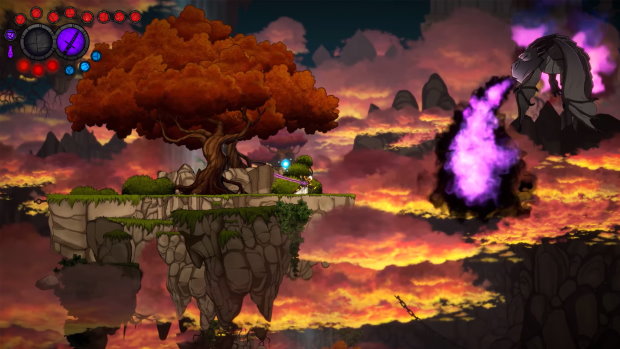 In terms of gameplay, there is a lot to love about this Metroidvania. Level designs are great and there is a lot to explore as you dive deeper into the game. The different gems and the skill tree also add a lot of depth to how you can shape up your build for your character. The one thing I didn’t fully appreciate was the way your character attacks, where he basically can’t move while attacking and feels a bit sluggish. For me, it took a bit of the fun out because it felt like all I had to do was stop, smash the Square button until the creatures die, then continue my way.

As for the trophies, if you’re used to Metroidvania games, you won’t be surprised to know that you’ll need to get pretty much everything in the game to unlock the platinum. There are obviously a lot of trophies tied to story progression, but then there are all the quests, skill points, heart fragments, and lore to find to get everything. The catch I mentioned earlier: you can’t earn any trophies at all if you choose to play on the easier mode, so you’ll have to play on the challenging difficulty to earn that platinum.

Aeterna Noctis is a fun and challenging Metroidvania game that’s definitely worth playing for fans of the genre, but beware of the challenge it is. For newcomers, it’s probably best to try an easier game or enjoy this one while accepting the fact that you’ll earn zero trophies on the easier settings. 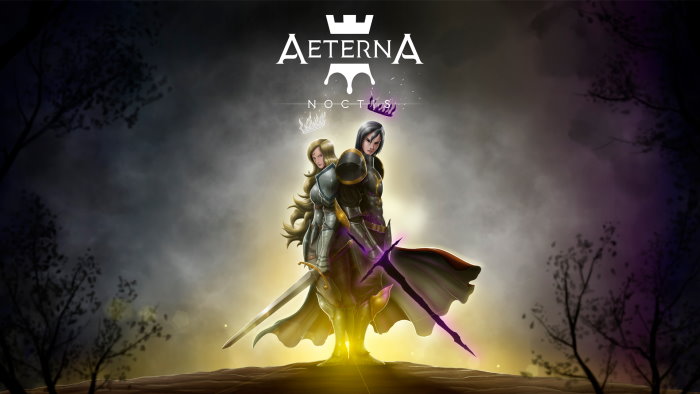 Disclaimer
This Aeterna Noctis review is based on a PlayStation copy provided by Sony Interactive Entertainment.