Dyna Bomb from 7 Raven Studios is a 2D action platformer that pays homage to the 8-bit classics in the genre. Learn more in our Dyna Bomb review! 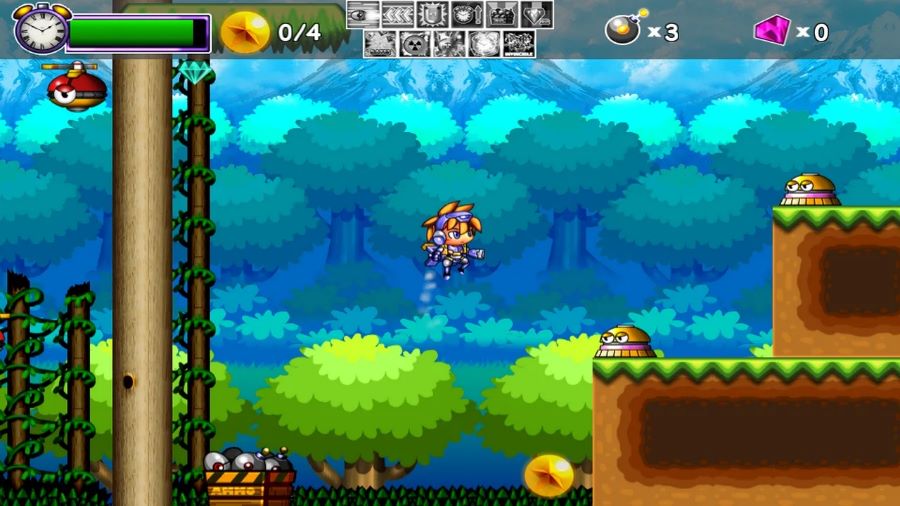 Dyna Bomb from 7 Raven Studios is a 2D action platformer that pays homage to the 8-bit classics in the genre. It features self-contained stages with enemies to avoid or defeat and diamonds to collect, with a character that can fly around as needed to get from point A to point B. The game includes 64 levels, split into 8 different worlds, with each world playing to an overall theme, such as a forest, a desert, and so on. 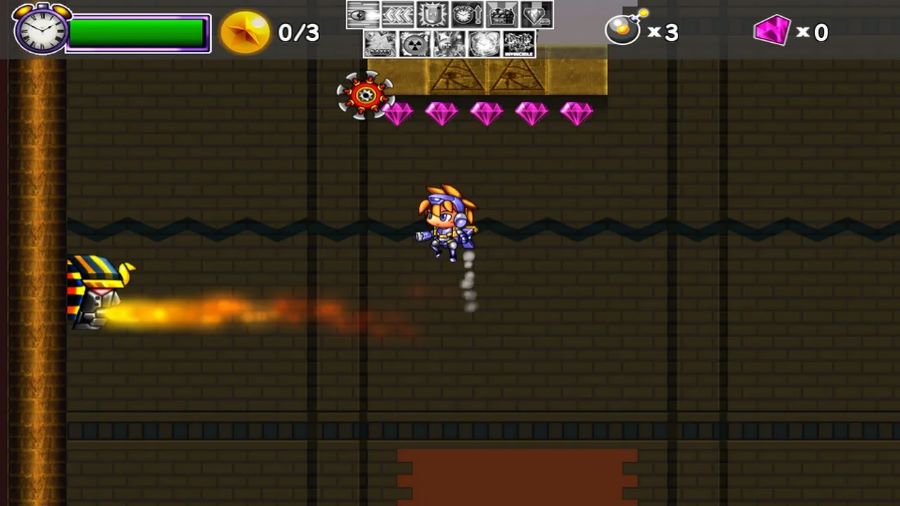 Your ammo is not infinite, so you’ll have to collect ammo packs in each level to receive extra bullets. You should collect as many diamonds in each level as possible so that you can use them in the slot machine to win power-ups such as being invincible for a stage. Diamonds can also be used to purchase items, such as doubling how many diamonds you get when you collect each one in a level, increasing how much time you have for completing a level or boosting your character’s overall speed. 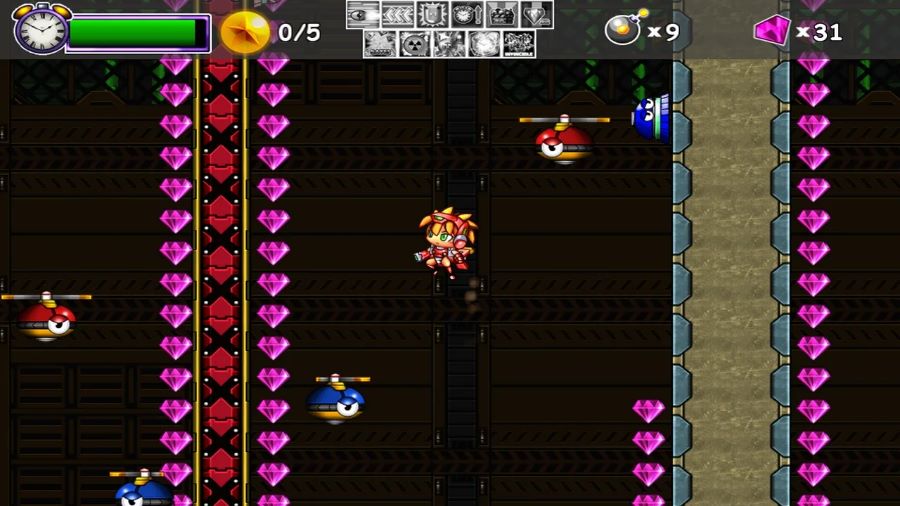 Every level will have a set number of stars encased inside of a sphere, which you can see at the top part of the screen. Some of them will be right on the main path, while others you’ll have to search for. There will also be a key to collect so that you can open the door to complete the stage. The 64 levels you’ll explore can also have portals that will teleport your character to another part of the stage. You can also find switches to deactivated traps or to open hidden or locked areas. To 100% the game, you’re going to have to collect every star on each stage, collect all diamonds in each stage, and defeat all enemies in each stage. If you collect all stars, you’ll get some bonus diamonds. Defeat all enemies, and you’ll get bonus diamonds. Collect all diamonds, and you’ll get bonus diamonds.


The good news for trophy hunters is that doing all of this is not needed for the Platinum trophy! The trophy list is split into one Silver trophy and 11 Gold trophies, and it will require that you use the slot machine, that you win something at the slot machine, that you complete the first two levels in the game, buy something with your diamonds, collect 500 diamonds, finish a level (expect level 1) without shooting and without collecting a single diamond, and that you destroy 20 chopper enemies, and 20 cleaner enemies. 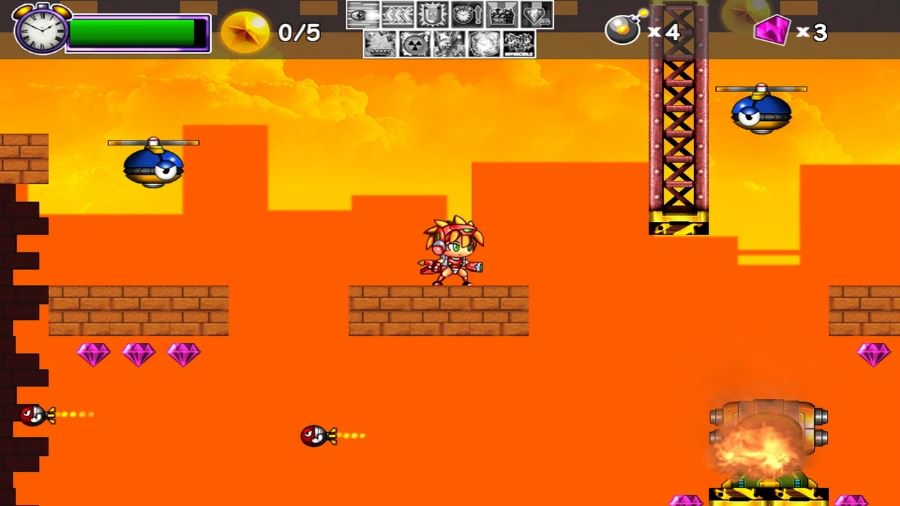 Dyna Bomb starts with a lot of promise, presenting itself as an homage to the 2D action platformers of ages past, with short levels to give you a chance to get used to the gameplay mechanics. Unfortunately, the game does not evolve past this point, with levels that show a lot of repetition, removing a platform here or adding a couple of portals there to try and pass themselves as completely new stages. Trophy hunters will have a Platinum trophy to aim for, but that’s about it for this one. Dyna Bomb is out on PlayStation 4 with a low price of only $4.99. 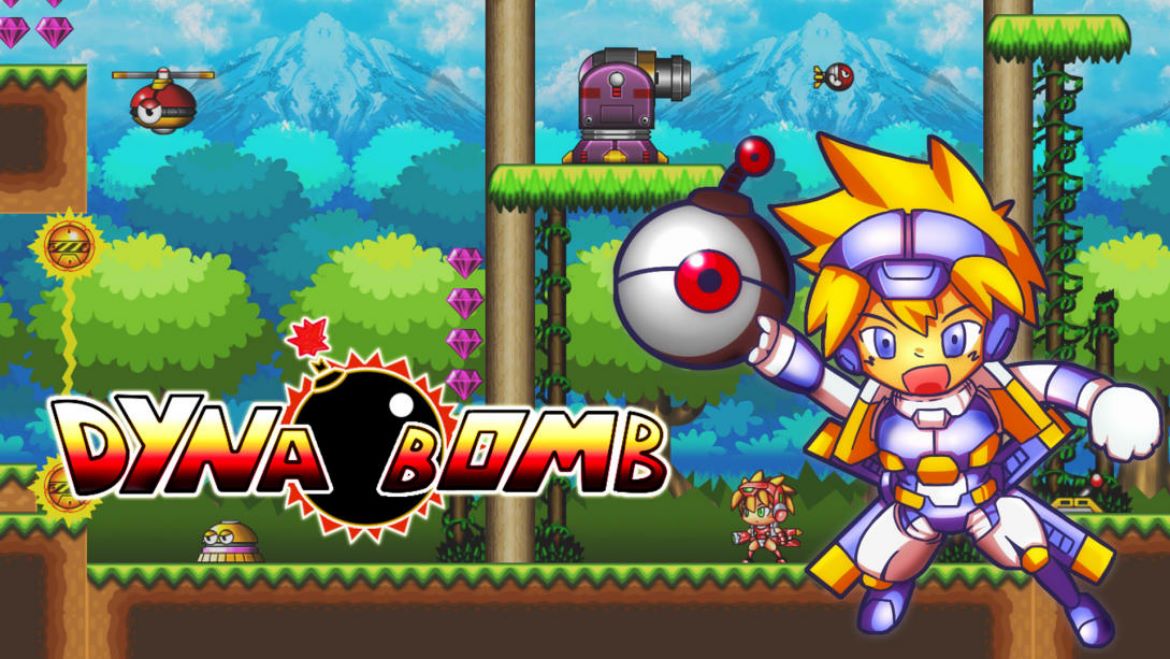 Disclaimer
This Dyna Bomb review is based on a PlayStation 4 copy provided by 7 Raven Studios.