We’ll be working on a review for Gearshifters, so I got in touch with Richard Ogden at Red Phanthom Games to talk a bit about the game. Come check it out!

PS4Blog: Morning! Thank you for joining us at PS4Blog.net. Could you please help us get started by telling our readers a bit about yourself and your work?

Good morning! I’m Richard Ogden from Red Phantom Games, the small studio I’ve been running for nearly ten years since going indie. My prior game industry career mainly revolved around driving or vehicle-action games such as Colin McRae Rally, the Pursuit Force series, and Motorstorm: Arctic Edge, among others. Making Gearshifters has felt like a return to those roots. It’s only my second game release as Red Phantom Games, having spent a lot of the in-between time working with other developers and publishers. For example, I ported Downwell to the PlayStation 4, PlayStation Vita, and the Nintendo Switch. It’s satisfying to be releasing my own stuff again! 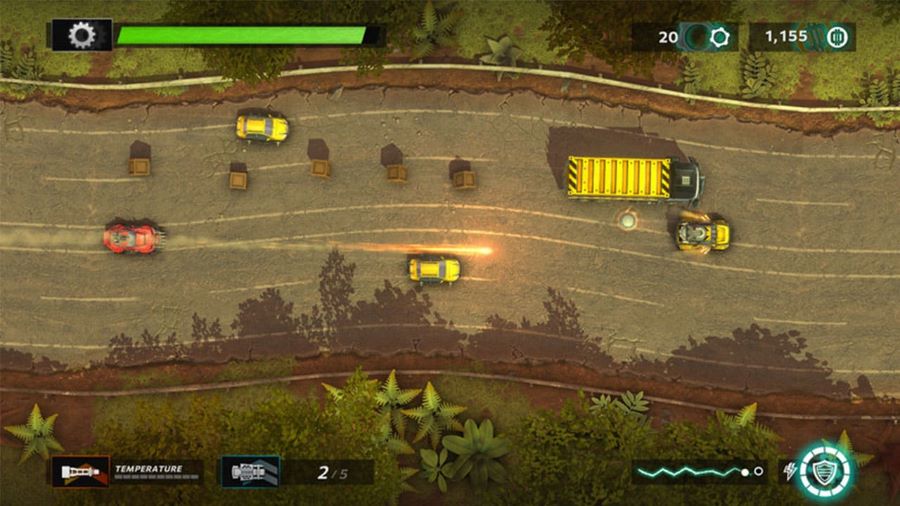 PS4B: On that note, You’ve released Gearshifters on Nintendo Switch and PlayStation 4. What can you tell us about this project?

As a game, Gearshifters is a horizontally-scrolling top-down vehicle-combat shoot-’em-up with a roguelite spin on the structure and progression. You battle your way along roadways against waves of enemy vehicles and large, insane-looking boss machines, all in the name of delivering cargo to some isolated outpost or ravaged city. It’s a post-apocalyptic future setting, but I’ve tried to move away from the usual Mad Max influences, so it’s not all spiky lunatics in a yellow desert!

It’ll feel mechanically familiar to shoot ’em ups but also distinct due to the physics and sense of weight of the player’s vehicle, which is an armored and weaponized muscle car. There’s a host of upgrades for the player to unlock: weapons, armor, abilities, boosts, visual customization – all of the usual nice things! The game is a bit of a hybrid – a mix of old-school and new –, but I hope it offers something unique and exciting for players who enjoy shmups, roguelites, or vehicle-based games.

Development has taken about two and a half years, stretched a little by the pandemic. It’s a small team based around using contractors – since the company itself is just me – and outsourced work. So, the credits list contains a lot of names. It’s an unconventional approach to making a game, but it helps to mitigate risk, and I think it works well. 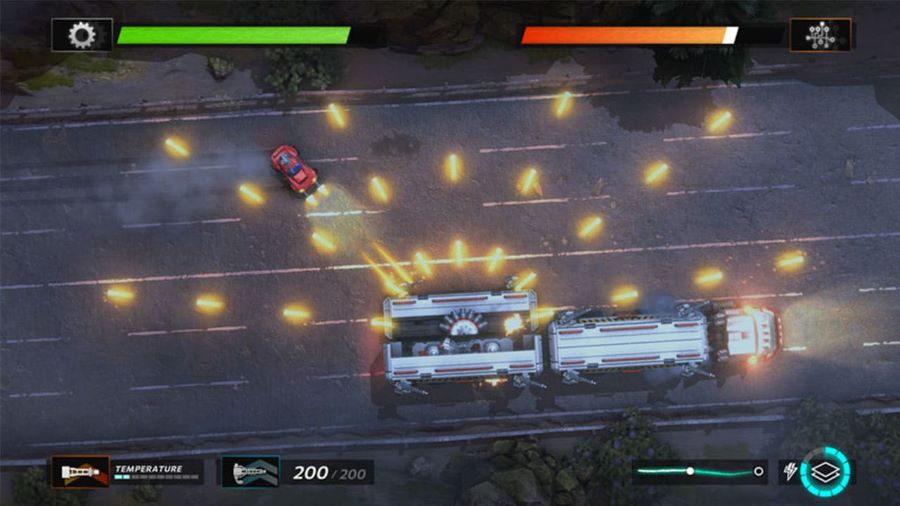 PS4B: It’s a very different game from Minutes, which we got to enjoy on PlayStation Vita and PlayStation 4. What drew you to work on a top-down arcade-style roguelite driving shoot ’em up?

Minute” was the first Red Phantom Games release. It’s very abstract visually and had a much lower budget, but it’s still fundamentally a unique arcade game, so there is a commonality there in my influences which actually go back to even earlier roots of visiting arcades as a kid. Gearshifters comes from the same source, really. It’s somewhat obvious that there’s a heavy inspiration from “Spy Hunter” (and there are a couple of respectful nods to that game in there). The impact of playing the likes of FTL, Into The Breach, and Dead Cells can be felt in the roguelite elements.

The idea for Gearshifters was one of many on a very long list that stood out,

partly for those nostalgic reasons. I’m now looking at the list again and adding to it before deciding on what’s next. Another arcade-style game? Something different? I simply don’t know yet! 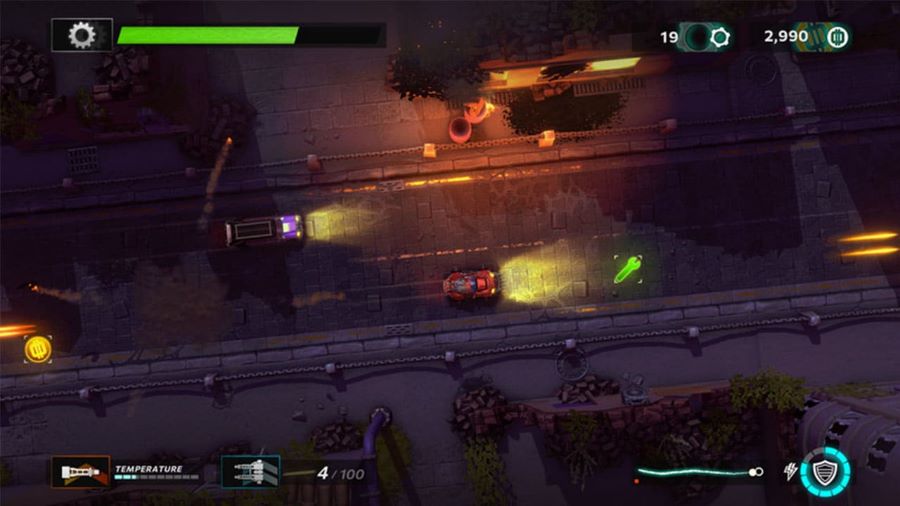 PS4B: On top of being available digitally, Gearshifters is also out as a standard and a Collector’s Edition. On that note, what’s in the box?

Partnering with Numskull Games has provided the opportunity to release boxed versions of the game, which is obviously less common for indies. It’s really special to have a physical release for the first time in many years.

The Collector’s Edition contains the game box itself, as you would expect, and it’s the same as the standard edition. On top of that, we’ve included the official soundtrack CD so you can listen to it without having to blow stuff up at the same time. We have four printed postcards of illustrated art pieces and characters from the game. Finally, there’s a clothing patch of the Gearshifters guild logo. 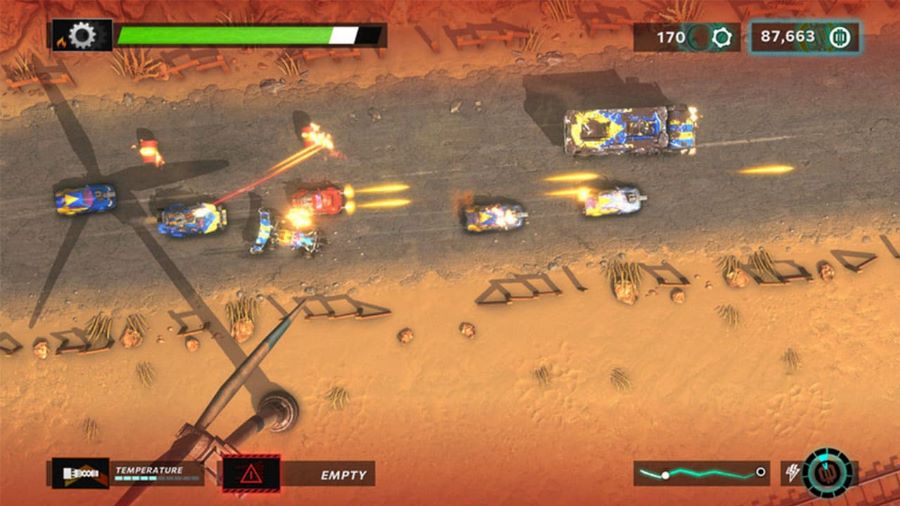 I’ve updated the game recently with balancing improvements and fixes so, if you do grab a physical version, make sure to download the latest patch! I’ll continue to update the game in the coming weeks and months with a few extra enhancements: additional usability options for controls and game customization, extra customization for the player car, a new game mode or two, and perhaps more weapons to play with.

Thanks to anyone who’s picked up the game and, for anyone who hasn’t, I hope you enjoy it if you do!