It’s time for our fifth and final post celebrating the best games of 2021! If you missed the previous post for our best games of the year, you can review them right now!


My Nintendo Switch Game of the Year: Metroid Dread

While Metroid Prime 4 is still far away on the horizon (maybe we’ll get it in 2023), we did get one heck of a surprise release for 2021: Metroid Dread! That’s right, after 19 years since the last new 2D entry in the beloved Metroid franchise, 17 years since we got the Metroid: Zero Mission remake on the Game Boy Advance, and four years after the Nintendo 3DS remake Metroid: Samus Returns, we finally got Metroid 5! That’s right, we got an action-packed 2D Metroid on the Nintendo Switch, and it’s definitely one of the best games in the series!

MercurySteam is back working with Nintendo after the great job they did with Metroid: Samus Returns, and we get a game that has been in development for a very, very long time! It was tentatively set for a Nintendo DS release, but the technology was not there. The project was started many times over the next decade, with an aim to build on the tension of Metroid Fusion. Enter the EMMI.

Samus is a powerful woman who has traveled around the universe, defeating enemies small and large, deadly bosses such as Ridley and Kraid, but the SA-X parasite definitely put her skills to the test. But even the SA-X was nothing compared to the EMMI! You’ll get a first taste of what the EMMI can do when you go up against a damaged unit that won’t show its full potential, but it will prepare you for the next one. Once a fully powered EMMI finds you, it will not stop until it grabs hold of you and kills you in one quick motion. You have a very short window to try and counter this deadly attack so that you can run, slide, dash, and morph ball your way out of its reach until you can absorb enough energy to power up the Omega Blaster that can destroy an EMMI. 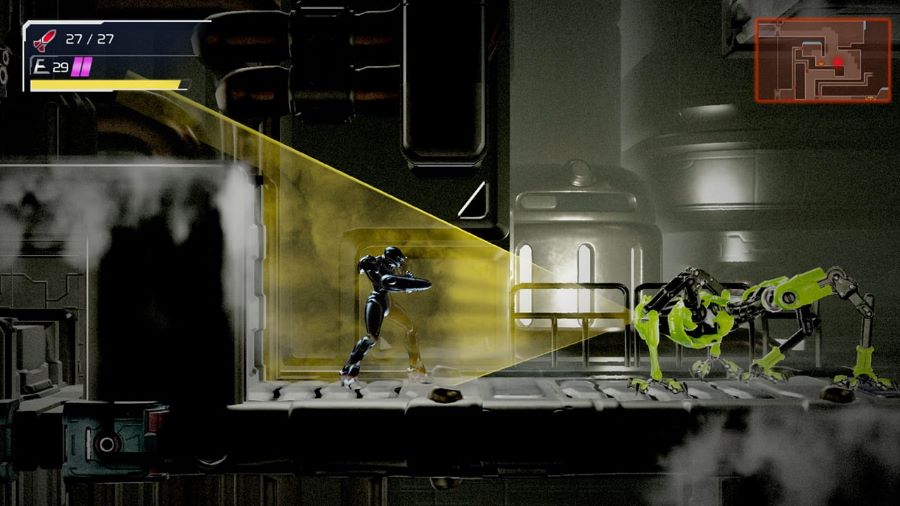 Metroid Dread is a Metroid game that has some survival horror vibes to it, and it reminded me at times of the excellent Alien: Isolation. It’s been a long wait, but Metroid Dread on the Nintendo Switch has certainly been worth it!

Unpacking from Witch Beam and Humble Games is a very chill, charming game about unpacking. You’ll be taking on a person’s journey from childhood to adulthood, experiencing how many of their belongings change along the way, while others remain as a constant, reminding them of what’s really important: living the moment and enjoying life.

It’s a game that features easy-to-understand gameplay mechanics, an addictive gameplay loop, excellent pixel artwork, thousands of sounds for the many objects you can unpack and place by taking into consideration the many surfaces on which said objects can be placed. The way the story is told by way of the objects you unpack from each box and how you place them around each location makes for an interesting experience that feels unique from start to finish. It’s a must-play on Nintendo Switch!

My PlayStation 4 Game of the Year: Narita Boy

Narita Boy from Studio Koba and Team17 took me by surprise on PlayStation 4. I was definitely looking forward to playing the game after checking out its trailer, but I was not prepared to be completely entranced by the game’s premise, atmosphere, pixel art, soundtrack, and gameplay. In the universe of Narita Boy, you’ll be playing as the titular character, which is activated by Motherboard, the supervisor program that oversees everything that is going on in the game. In this reality, The Creator has built the Narita One gaming console, with Narita Boy as its flagship title. The game sells millions of copies and is the best-selling game of all time, which is great, right? Unfortunately, inside of the game’s code lies a digital realm that is being threatened by the evil HIM.

The game’s retro-styled look and feel aim to emulate a long-gone era that still lives within our hearts, bodies, and souls while also polishing the graphics and audio to perfection. As you wield the Techno-sword, you’ll take on a sidescrolling journey that shines on Sony’s console, standing out as a must-play title from the little indie studio that could. The awesome soundtrack by Salvinsky is all killer and no filler, making this my best PlayStation 4 game for 2021.

The Forgotten City from Modern Storyteller and Dear Villagers is a time travel murder mystery on PlayStation 4 that started its journey as a mod for The Elder Scrolls V: Skyrim by Nick Pearce. It ended up winning a national Writer’s Guild award in 2016, which prompted Nick to quit his ten-year legal career to be able to expand on the mod, bumping the number of developers for the project.

It’ uses a clever time loop gameplay mechanic that at times reminded me of The Legend of Zelda: Majora’s Mask. Replaying the same period of time over and over while keeping your inventory intact from loop to loop will bring you one step closer to reaching each of the game’s four different endings. You’ll find new ways to fix each issue you run into during subsequent runs, gaining access to a zip line accessory to help you zip around the city at a faster pace. The Forgotten City is an experience that you’ll greatly enjoy on PS4!