The classic Star Wars: Knights of the Old Republic is now ready for you on Nintendo Switch. Aspyr is giving us a new take on the RPG game that was released way back in 2003. And yes, we are getting a Star Wars: Knights of the Old Republic remake on PlayStation 5 – as per the September announcement – other than it being console exclusive at launch, that’s all we know about the remake, so now is a great time to dive back into the original game that has now been revamped for the Nintendo Switch! 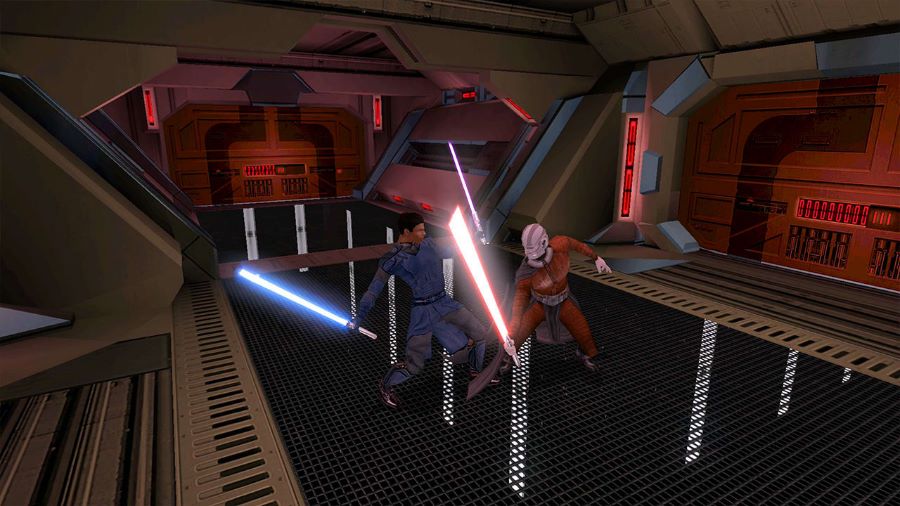 Star Wars: Knights of the Old Republic takes place four thousand years before the Galactic Empire. Hundreds of Jedi Knights have fallen in battle against the Sith, and you’re now the last hope of the Jedi Order! You must harness the Force and save the Republic before it’s too late… unless the dark side lures you! The game’s original developer is Bioware, which will probably give you a good idea of what to expect from this journey. Your actions and the choices you make during story segments will have an effect on your alignment, which will, in turn, affect your appearance if you start to move closer to the dark side.

After the Mandalorian invade the Republic in a pan-galactic conflict aptly known as the Mandalorian Wars, a group of renegade Jedi join the conflict and defeat the invading forces… after which they disappear. For some reason, they returned with a Sith armada by their side, launching a new invasion against the Republic! After Malak, Revan’s apprentice, rises to the role of Dark Lord of the Sith, it’s up to you to decide if you’ll go up against those that have now sworn allegiance to Malak or if you’ll end up moving onto the dark side by way of violent actions and outright selfishness, caring about no one else but yourself.


While the game does take place 4,000 years before the rise of the Galactic Empire, that doesn’t mean you won’t be visiting some of the iconic locations from the Star Wars universe, such as, say, Tatooine. By taking control of the Ebon Hawk, you’ll travel to eight huge worlds, ready for you to explore. While this is a single-player RPG, you won’t be doing this on your own. You’ll get a chance to create your party from the available characters and classes so that you can balance things out and have a chance to survive the many challenges you’ll face. 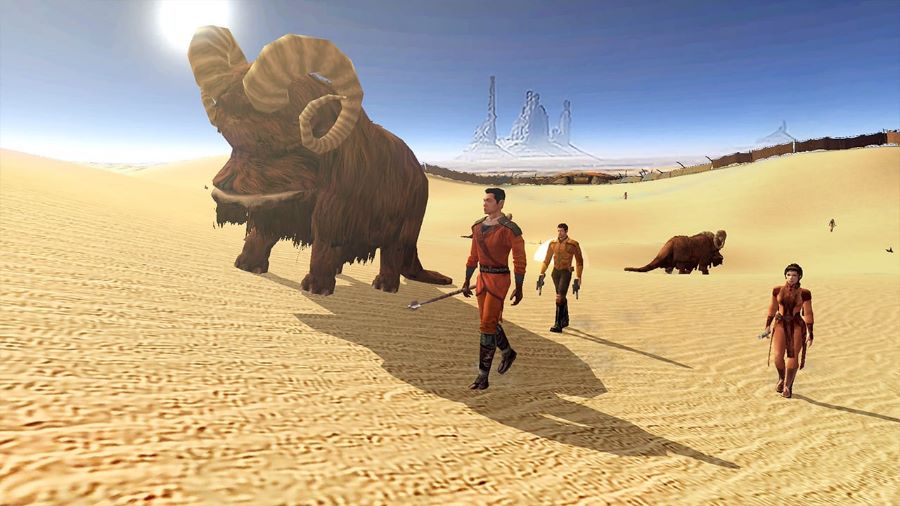 The first step on your new adventure will be to select between a male or female character and pick between the three available classes: Scoundrel, Scout, or Soldier. The Scoundrel is a skillful rogue that uses stealth and guile. The Scout is an explorer and is most at home on the fringes of space. As for the Soldier, it’s a battle-ready fighter who can deal a lot of damage to opponents. This is one of the easier choices in the game because, after that, you have to roll for and customize your character’s stats!

Sure, you could take the easy way and have the game roll for you so that you only have to focus on your character’s look and name. But if you really want to dive in, you can customize your character’s attribute, skill, and feat allocation on top of its name and appearance. Every point counts, as you allocate them to strength, dexterity, constitution, intelligence, wisdom, and charisma. The attributes of your character apply bonuses or penalties to combat, skill checks, force powers, and more!


Strength affects physical power, so the higher your strength, the greater your melee damage and hit percentage. Dexterity will measure your agility and reflexes while also influencing rolls for ranged attacks and your character’s defense rating. Constitution is for your health and resiliency, adding more vitality points after each level up. Intelligence represents your character’s knowledge and reasoning, affecting how many points you have to spend on essential skills. Wisdom will represent willpower and perception, making your Force Powers harder to resist. And then we have Charisma, which represents your personality and your ability to lead. If you want to be able to persuade others, then you’ll need to boost this one. Attributes can’t have less than 8 points assigned to them, nor more than 18, so use your starting points to start to mold the type of character you’ll be playing as! 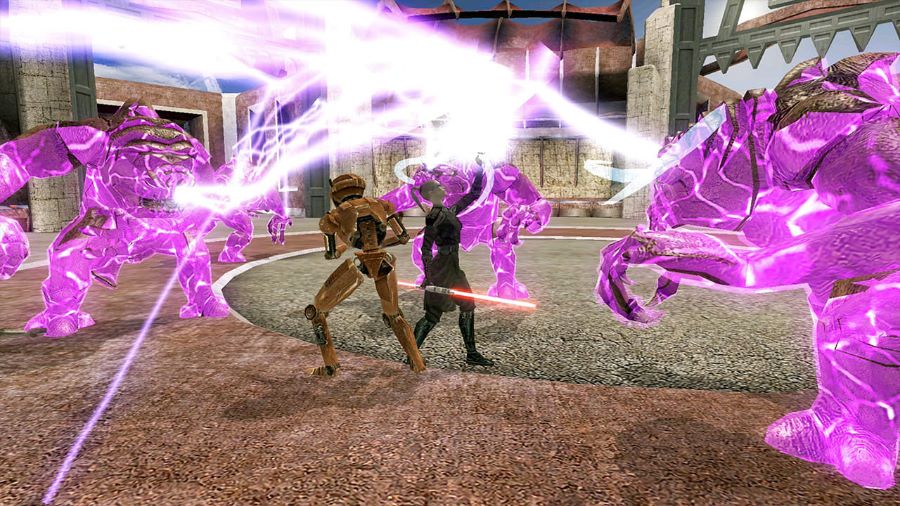 Skills are also important for your character, and they will be related to how many points are allocated to your attributes. There’s computer use, which allows a character to brute Force through computer programs to, say, disable gun turrets. Demolition can be used for placing, disarming, and recovering mines of different difficulties. Stealth, which is related to dexterity, will allow you to use camouflage devices to stay on the safe side of things. Awareness will counter stealth, allowing you to spot hidden enemies or objects. Persuade is tied to charisma, and it will affect the dialogue options you can access, leading some characters to reveal information they otherwise would not. Repair allows your character to fix disabled mechanical devices based on your intelligence. Security is tied to wisdom, and it will give you access to electronic locking devices. The last one is treat injury, which will improve how much you recover from damage when using a medpac, healing more vitality points.

Another thing to consider is feats. These will allow you to use special items – like, say, heavy armor or implants – or modify save throws and skill checks. There are even some feats that are used during combat! You could go for two-weapon fighting so that you can wield two weapons without being penalized for it, add more armor types to wear, give a skill point boost to demolition and stealth, double the critical threat range of melee weapons, allow a character to deal an extra melee attack during the round, or allow a character to use cybernetic implants, to name some examples.


You can customize your Star Wars adventure by changing the difficulty for combat between Easy, Normal, or Hard. Normal offers the standard experience, and lowering or increasing the difficulty will affect the damage you deal to enemies as well as how powerful their attacks are. You can also select to activate auto level up so that party members automatically level up when they have enough experience points, or leave it off so that you manually take care of things. Having autosave on is definitely recommended so that the game saves whenever you move to a new area – although you’re certainly encouraged to do a manual save every now and then. Movement can also be disabled or enabled for when you’re in combat mode. 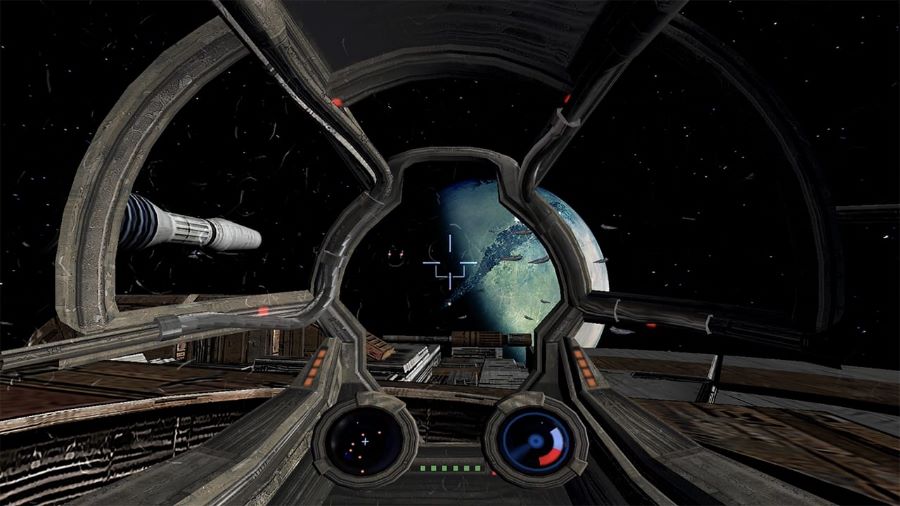 If you’re new to the game, you should leave tutorial popups on so that a window appears whenever a feature is used for the first time in Star Wars: Knights of the Old Republic. You can also have subtitles on so that all dialogue gives you text subtitles. The control can also vibrate as needed. If you don’t want to get lost, activate the mini-map so that you can always know where you’re going. Something else that is very useful is the floating numbers and status summary that show how many experience points you gain, any chances in vitality points, and if an attack misses. You’ll also be notified of how many credits you’ve earned.

On top of this, you can activate different auto-pause options, such as having the game pause at the end of each combat round, whenever a new enemy is sighted, when one of your party members is defeated, whenever a new target is selected in combat, or when you scroll horizontally or vertically through the action menu. Thanks to all of this, you can take on Star Wars: Knights of the Old Republic at your own pace. 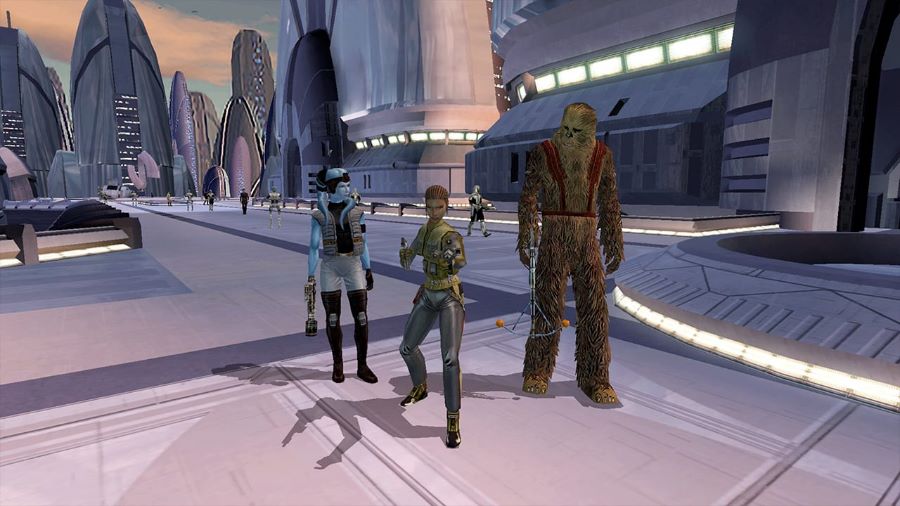 Star Wars: Knights of the Old Republic is a classic for a reason, and it’s a game that still holds up all these years later on Nintendo Switch. The choices you make will matter, you can customize your experience based on your playing style, select from the available classes, focus on this or that skill as you unlock and improve your character’s feats, and form a party that complements all of this. There’s a lot to do in this game, so you’ll be spending dozens of hours just working your way through a first run – of what should be many so that you can see what the light side and the dark side have to offer. Star Wars: Knights of the Old Republic is out on Nintendo Switch, and it’s a steal at only $14.99. Sure, the graphics do show their age, but this is the one complaint you could have about this excellent adventure, and the graphics certainly don’t get in the way of the fun. 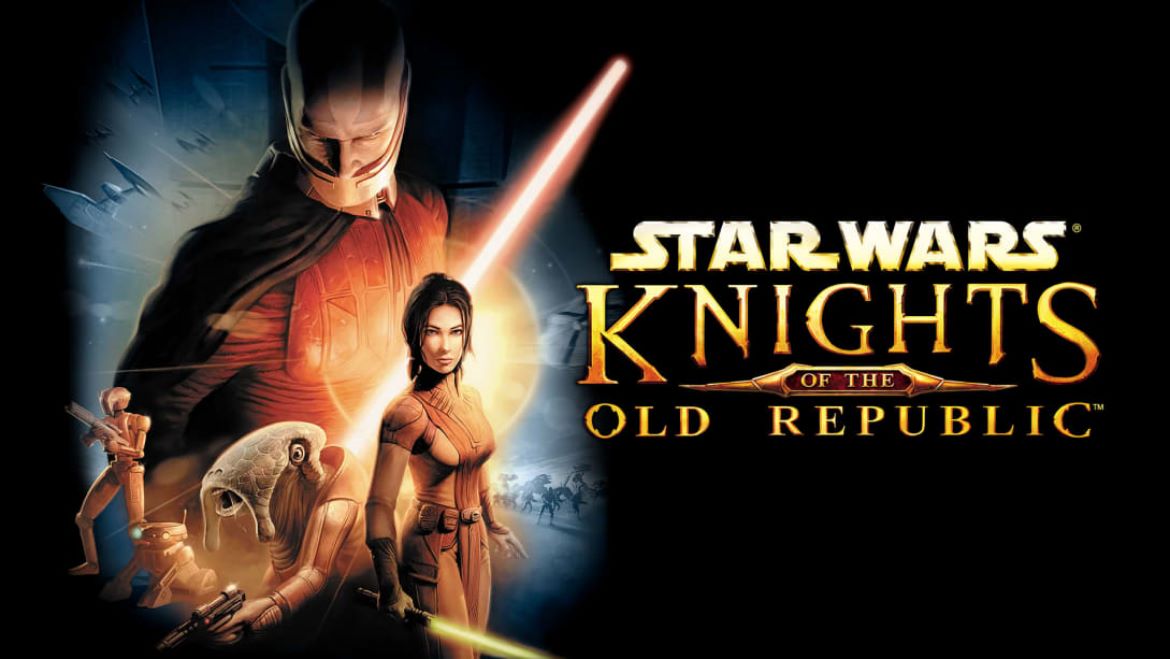 Disclaimer
This Star Wars: Knights of the Old Republic review is based on a Nintendo Switch copy provided by Aspyr.

Persona 4 Arena Ultimax On Its Way To Consoles!