[PS5] AWAY: The Survival Series Review


AWAY: The Survival Series from Breaking Walls places you in the role of a sugar glider in a post-apocalyptic world in which nature has reclaimed the planet. Once you start the game, you’ll feel as if you’re playing through a nature documentary, what with a narrator joining you for the ride as you explore this new world. It’s a single-player, story-driven experience with an orchestral soundtrack, in which you’ll have to hunt small prey to stay alive, avoid the larger predators, and use stealth to survive! 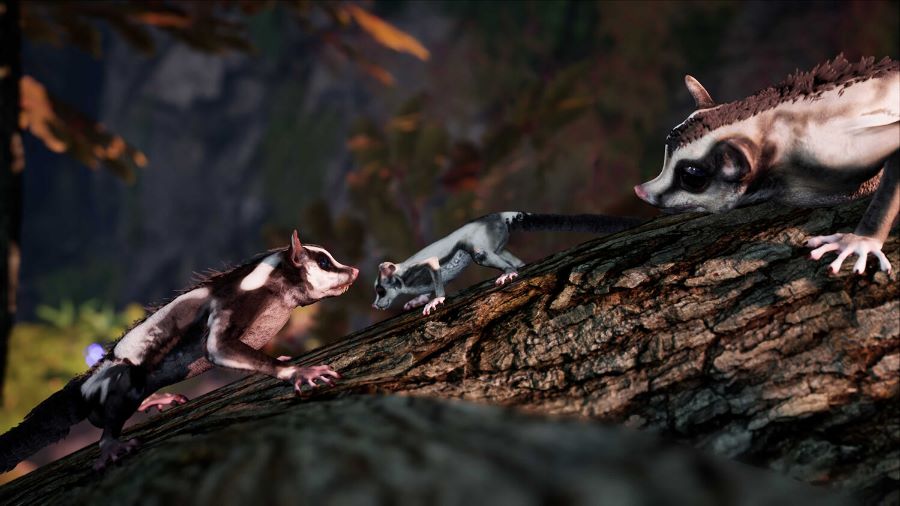 Before you begin, you can select between two difficulty settings: Explorer, which is the easier one, and Adventurer, which is the standard experience. After an introduction that has you playing through a nasty storm, during which the family’s father is taken away from them and their nest is destroyed by a predator. They must, therefore, step into the unknown to find a new place they can call home. You’ll need to eat to stay alive, replenishing your energy, your stamina bar, as well as your glide bar. As their name suggests, sugar gliders are more at home when gliding from tree to tree, which is why you should stay away from the ground at all times.


You’ll control your character with the left analog stick, moving the camera with the right one, and pressing in on this stick to activate your instinct. Think of this as, say, the Detective Mode from the Batman Arkham series, allowing you to see any potential predators and to see trails that will lead you to new sources of nutrition. You can dodge attacks left and right with the L1 and R1 buttons, springing with the Square button – which you’ll also use to eat – and jumping with the X button. 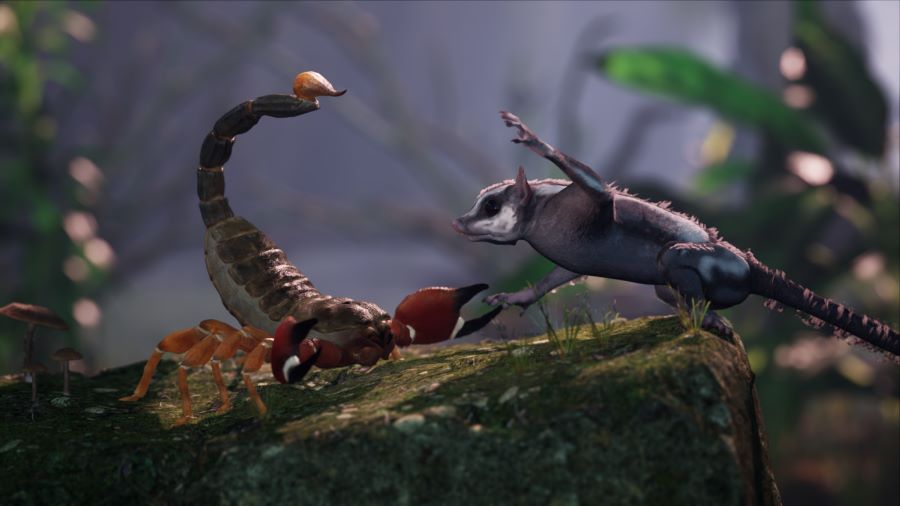 After jumping, hold down the X button to glide so that you can avoid enemies and clear long gaps. To attack, press the Circle button. This can also be used after dodging an attack in order to launch a counterattack. You can also lock onto enemies with the L2 button, which can also be used to aim where you want to jump so that you don’t fall down to your death. You can also grab items with the R2 button, which you’ll get to test during the starting section of the game when you need to catch a lizard and bring it back to your family so that they can eat.


You need to be very careful as you explore the world of AWAY: The Survival Series. Large predators can destroy you in an instant. Poisonous scorpions can kill you with a single sting. Red thorns can poison you, slowly bringing you one step closer to death. Water is extremely dangerous for the sugar glider since it can’t swim! If you fall in the water, you’ll only have a few seconds to try and find something you can stand on – a piece of wood, a small patch of land – to try and return to the path you were on before making a mistake. 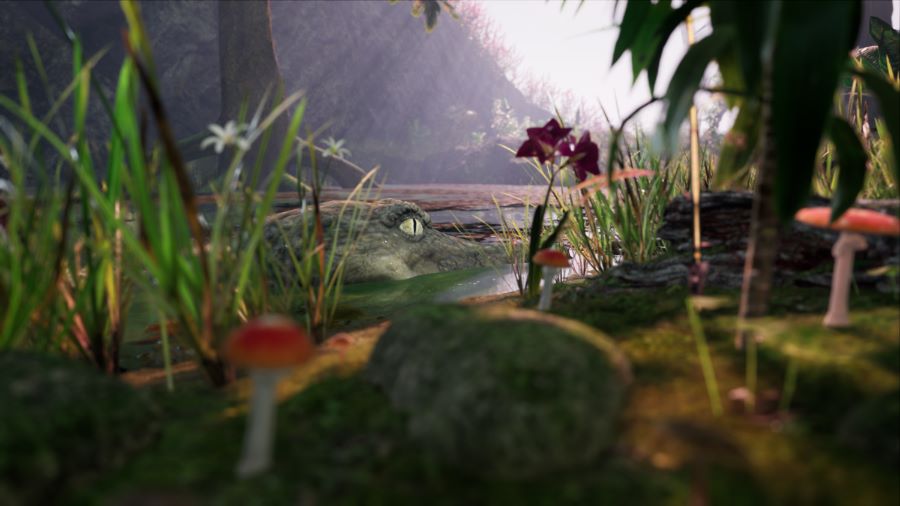 Your sugar glider will grow as you progress through the game, improving its stamina, learning to fight, increasing the damage of each swipe it takes at an enemy, improving its gliding stamina, learning from its mistakes – such as eating a venomous spider which, while granting a big boost to its energy and stamina, will make it dizzy and slow him down. This will be very useful after you’re separated from your family! A vulture attacks during a short moment of tranquility, but the sugar glider manages to break free from the vulture’s grasp, falling to the ground. You must now do whatever it takes to find and rescue your mother and sister!


AWAY: The Survival Series is not without issues. The adventure’s story might feel a bit linear, with water and thorns keeping you from really exploring most areas. The camera is also a bit too close to your sugar glider, and once you fall into the water, odds are you won’t be able to survive since the camera will instantly move above the sugar glider, not giving you much time to react as you try to find some safe ground. There’s also some slowdown here and there, as well as clipping when your sugar glider rides an animal or gets too close to a wall.

The game includes a full trophy list with a Platinum. The list is split into 8 Bronze trophies, 8 Silver trophies, and 7 Gold trophies. The first one to pop will be the one for completing the game’s tutorial. After this, you’re going to have to eat 10 spiders, hunt down 10 lizards, eat 100 raspberries, glide for more than a minute, defeat 100 ants, beat the game’s story in each of the difficulty settings, as well as complete the different sidequests and find the collectibles hidden in the exploration segment of the game. 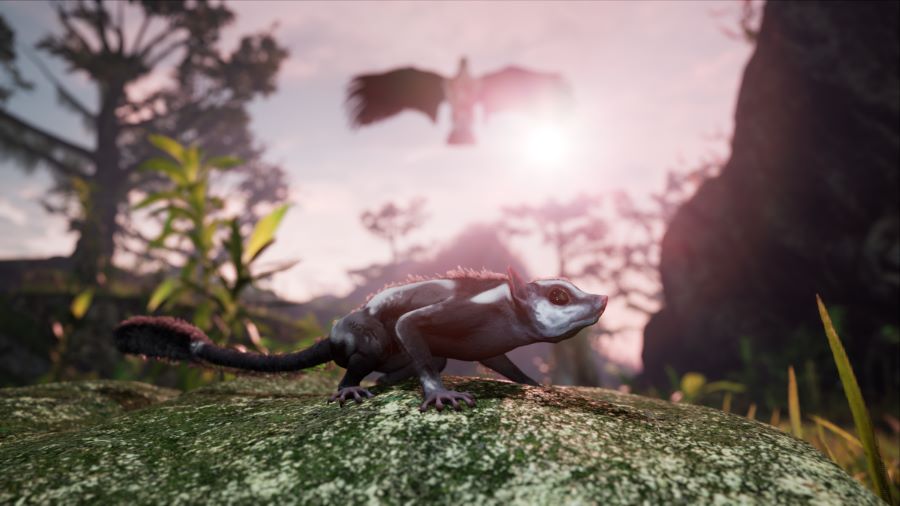 AWAY: The Survival Series has an interesting premise that is held back by its execution. There are some technical glitches here and there that will force you to redo some sections, but at least the game’s checkpoint system is generous. It’s a linear story experience that is enhanced by the narrator who joins you for this adventure. AWAY: The Survival Series is out on PlayStation 5 with a $29.99 price, and since it’s a cross-buy game, you will get the PlayStation 4 and the PlayStation 5 versions of the game at no extra cost. 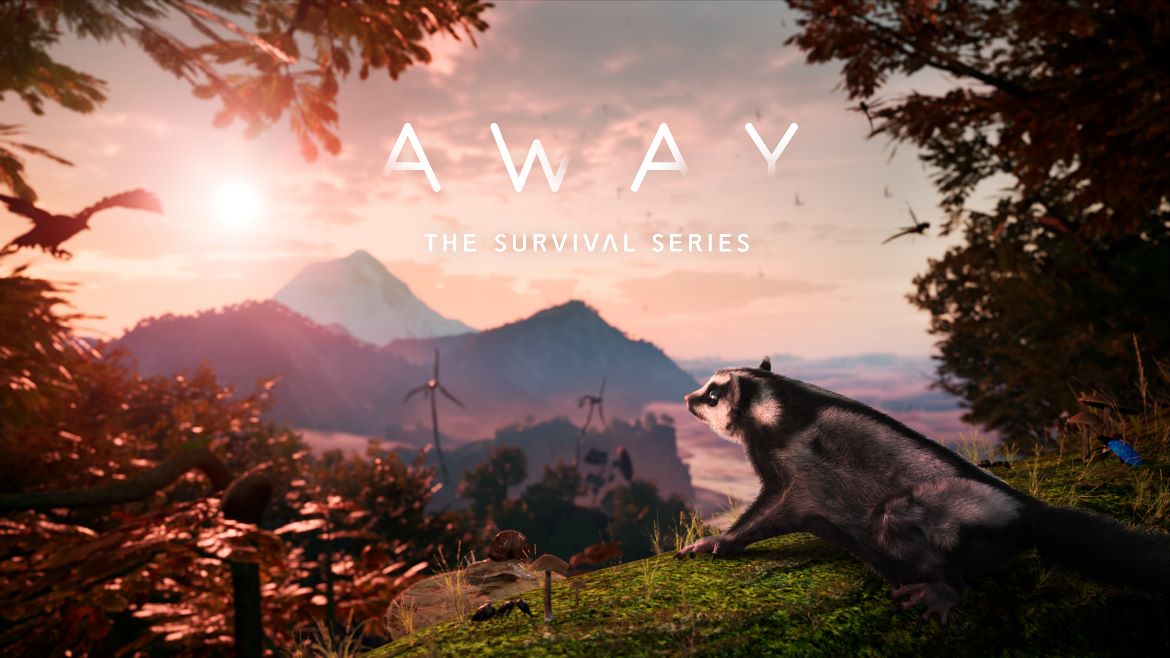 AWAY: The Survival Series Review

Game title : AWAY: The Survival Series

An interesting concept that is hindered by some of its choices

Disclaimer
This AWAY: The Survival Series review is based on a PlayStation 5 copy provided by Breaking Walls.

Clockwork Aquario On Its Way To Consoles