Big Rumble Boxing: Creed Champions from Survios is an arcade-style game that brings 20 iconic characters from the Rocky and Creed franchises. When you first start to play the game, there will be ten characters ready for you to play as: Adonis Creed and Rocky Balboa – of course – as well as Viktor Drago, Andy Pono, Axel Ramirez, Luke O’Grady, Ricky Conlan, Leo Sporino, Vick Rivera, and David Nez. When fighting against the AI, you can select between the Rookie, Pro, and Champion difficulty settings. The goal is simple: land punch after punch on your opponent so that you can empty their health bar to knock them down. Knock them down multiple times, and you’ll be victorious! You can play Big Rumble Boxing: Creed Champions in one of three modes. There’s Arcade Mode, which will allow you to discover more about the legend behind each boxer while also unlocking new fighters. Versus Mode gives you the chance to face off against an AI opponent or another human player. Training Mode is a good way to practice against a customizable training dummy so that you can get a better feel for the game.


You’ll move your fighter with the left analog stick or the D-Pad, unleashing your basic attack with the Square button and your power attack with the Triangle button. You can grapple with the Circle button and can try and dodge attacks with the x button. The R1 and R2 buttons will be for guarding, but you’ll need to pay attention to the guard meter since it will drain with every punch you block. Press the R1 or R2 button at the right time as your opponent’s attack lands to perform an invincible counter-punch. Once you’ve filled up your super bar, which is located at the bottom of the screen, you’ll be able to unleash a super attack with the L1 and L2 buttons to deliver a powerful punch that could seal the deal. 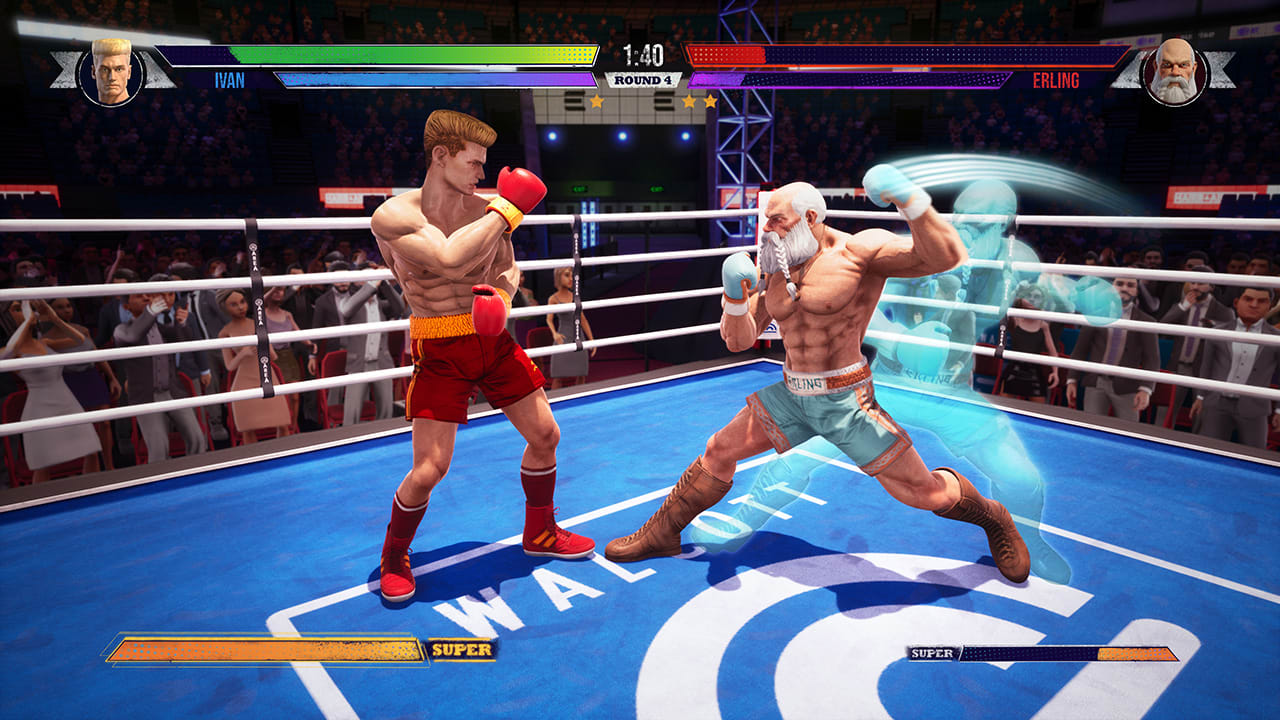 You can pull off a combo by pressing the Square button four times in a row. You can also end a combo with a down ender, a back ender, or an up ender by pressing down, up, or left on the left analog stick or the D-Pad as you land the final blow in a combo. There’s also the option of pulling a power attack within a combo, such as pressing the Square button three times and then pulling out the big guns with the Triangle button. If you break your opponent’s guard meter, they’ll end up dazed, allowing you to deal a powerful combo, or deliver a super attack if you have filled up your super bar. Big Rumble Boxing: Creed Champions has a long list of trophies, and at the end of the road, you’ll add one more Platinum to your collection. The list is split into 43 Bronze trophies, 8 Silver trophies, and one lonely Gold trophies. You’ll have to beat the Arcade Mode with each of the 20 fighters, win a match by landing the knockout punch with a super attack, break your opponent’s guard meter three times in the same fight, get the first knockdown in a match without receiving any damage, land a super attack three times in a match, or win a match without using any basic attacks, to name some examples. Big Rumble Boxing: Creed Champions is a fun arcade-style boxing experience on PlayStation 4 that pays homage to the Rocky and Creed franchises by giving us 20 fighters that highlight different moments from the movies. It’s easy to pick up and enjoy since it doesn’t have a boxing sim side, so you won’t be managing stats or training regimes and can just dive into a quick fight or take a fighter through their Arcade Mode arc. Big Rumble Boxing: Creed Champions is out on PlayStation 4 with a $39.99 asking price. Disclaimer
This Big Rumble Boxing: Creed Champions review is based on a PlayStation 4 copy provided by Survios.

Stilstand Out Today On Consoles