Centipede: Recharged from AdamVision Studios, SneakyBox, and Atari is a neon-infused new take on the classic arcade experience. Last year we got Missile Command: Recharged, which went for a similar revamp of the original formula, making everything a bit more fast-paced, with a big coat of neon and a pumping soundtrack. It’s now 2021, and it’s time for Centipede to join in on the fun and get the Recharged treatment. It’s a new take on a classic that is ready for gamers from a new era to experience it for the first time or for old-school gamers to reconnect with an old friend. 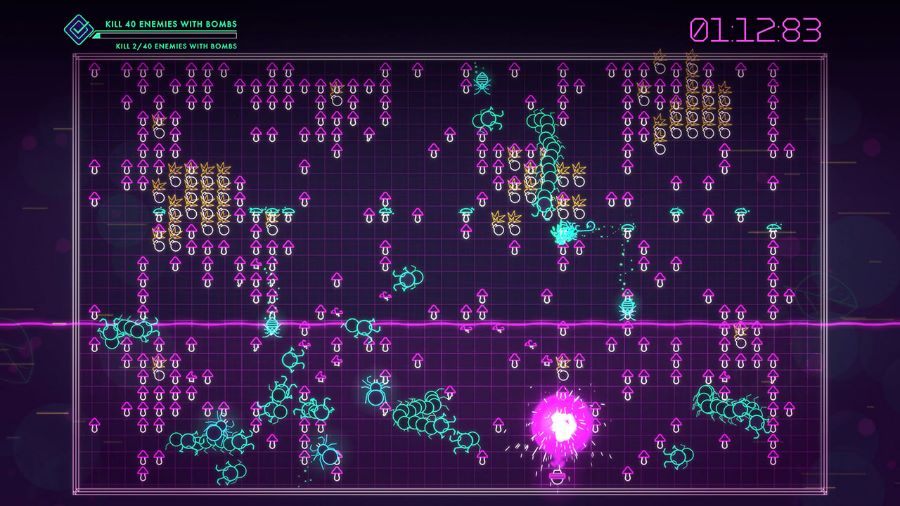 Centipede: Recharged can be played on your own or with local co-op, either in its Arcade Mode or its Challenges Mode. Arcade Mode offers an experience closer to what we got way back in the day when Centipede was released as an arcade machine in 1981. You’ll use your ship to attack the centipedes that move down the screen from the top. The game has been revamped with a new neon look, and the rumble from the DualShock 4 will keep you on high alert at all times as you shoot at everything, dodge enemies, and collect power-ups.


You’ll move your ship at the bottom of the screen with the left analog stick, shooting at the centipedes with the X button. Whenever you hit a centipede, the rest of its body will break off depending on where you hit it. The part that you destroy will also turn into a mushroom, which will block your shots while also making centipedes turn around and move down a line as they get closer and closer to you. You can’t move past a line on the screen, so you’ll have to do most of your work from the bottom third or so. You’ll also have to deal with scorpions that walk around the screen or fleas that quickly drop from the top of the screen. 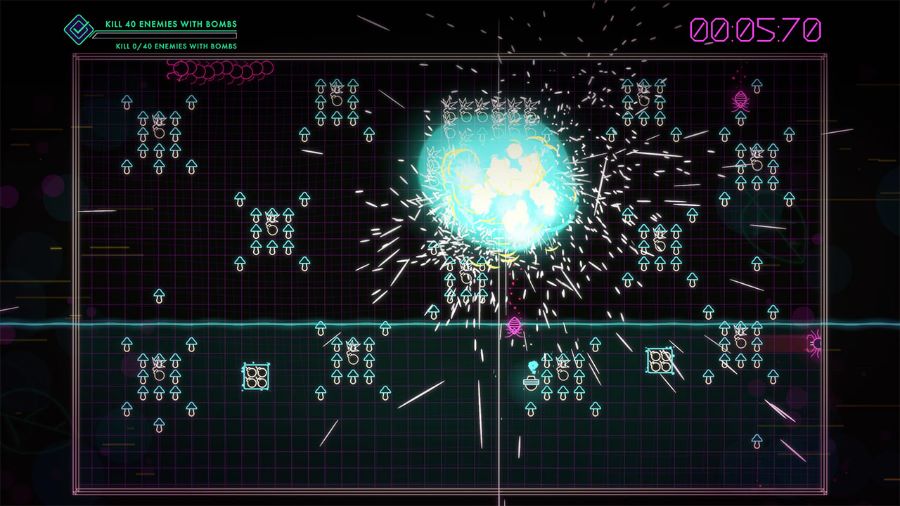 Every now and then, a spider will show up in your area of the screen. Since a single hit is all it will take to destroy you, you must be very careful as you move around the screen because the spiders do have a tendency to show up at the worst of times. The good news is that if you manage to defeat a spider, it will leave behind a power-up to boost your attack power. These can include a spread shot, a burst shot that covers a wider area but has a smaller range, an explosive attack that will make everything go boom when it hits a target, rapid-fire, bullets that will orbit around your ship, and more.


As for the Challenges Mode, this one will have specific objectives for you to complete. For example, one is called Pyramid, and it asks that you score at least 5,000 points to complete it. Another one is Trap, which has your ship surrounded by mushrooms, so you’ll have to destroy 45 of them as quickly as possible. The aptly titled Bomberman requires that you defeat 40 enemies while using bombs. Indirect Approach will ask that you defeat 20 scorpions, but there’s a barrier keeping you from attacking them right away. It’s a nice variety of challenges to work on, which you can do in single-player and co-op. 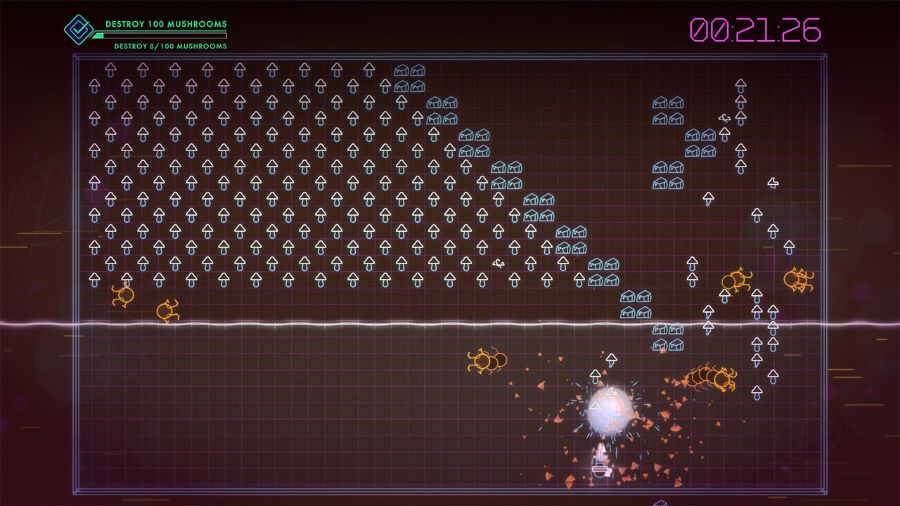 Trophy-wise, Centipede: Recharged has a full trophy list with a Platinum trophy, and it’s one that will keep you busy for a while! You’ll unlock trophies by reaching 2,000 points without missing a single shot, reaching 20,000, 30,000, and 40,000 points in Arcade Mode, completing all challenges in single-player and co-op, defeating 15 enemies in quick succession, detonating 50 bombs with a single shot, destroying 1,000 centipedes, 400 scorpions, 600 fleas, 800 spiders, and for resurrecting an ally in co-op. 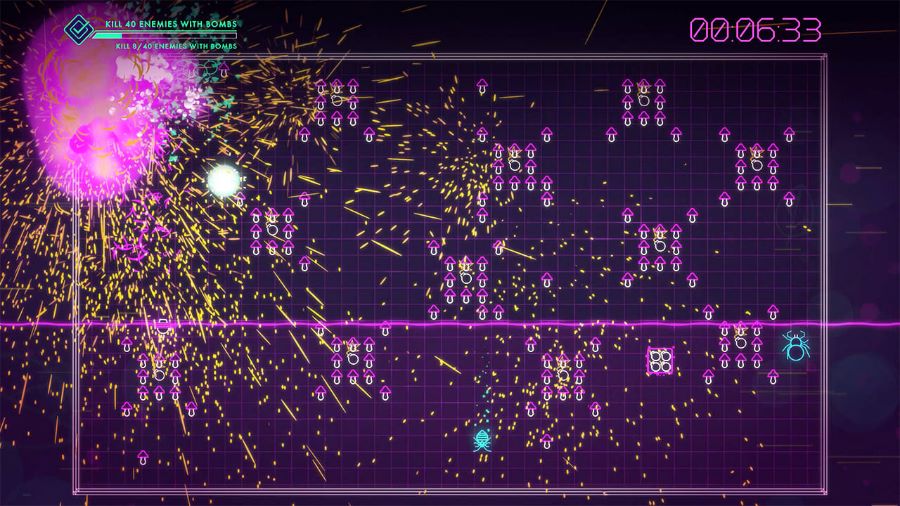 Centipede: Recharged takes the classic Centipede arcade formula and revamps things for a new generation to enjoy in 2021. It offers endless fun in its Arcade Mode, which you can replay over and over to try and beat not only your own score but also the high score of gamers from around the world. The Challenge Mode, with its 30 challenges to beat, also adds some extra value, not to mention the game has a Platinum trophy for you to add to your collection. Centipede: Recharged is out on PlayStation 4 with a $9.99 price. 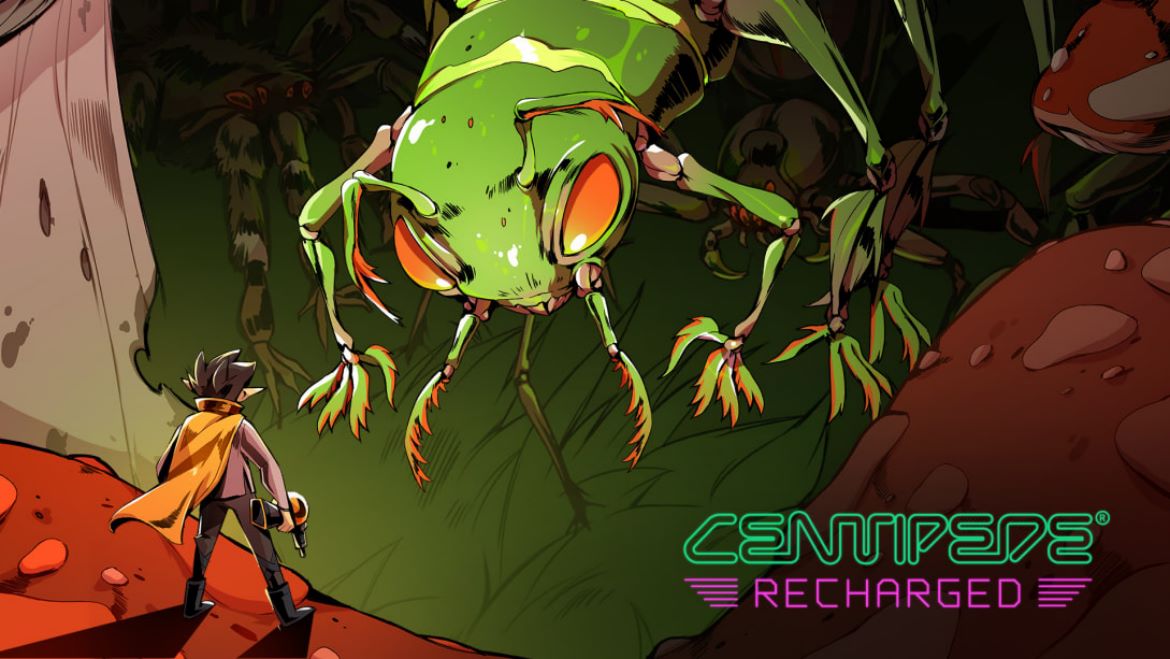 A fun new take on a beloved arcade classic

Disclaimer
This Centipede: Recharged review is based on a PlayStation 4 copy provided by Atari.

Stilstand Out Today On Consoles