We’re working on a review for Big Rumble Boxing: Creed Champions, so I got in touch with Survios to talk a bit about the game. Come check it out!

PS4Blog: Hi! Welcome to PS4Blog.net. Thank you for joining us this morning. Could you please help us get started by telling our readers a bit about yourself and your work?

Hey there! My name is Eugene Elkin, and I’m the Senior Software Engineer at Survios. I served as Project Lead on the recently released Big Rumble Boxing: Creed Champions. I was also Project Lead on Survios’ previous title in the series, Creed: Rise to Glory. PS4B: Big Rumble Boxing: Creed Champions is out now on PlayStation 4 and Nintendo Switch. What can you tell us about this arcade-style boxing game?

With Big Rumble Boxing, we wanted to create a game that takes gamers back to the golden age of arcade fighting we all remember so fondly, where you can perfect timed dodges and combos to use against your friends. Making the game this way gave us a different level of creative freedom and is something that we believe players will enjoy each time they pick the game up to play it.

The game features storylines from the movies that fans know and love and all-new stories created specifically for the game. The core lineup of characters includes fan favorites from the Creed and Rocky universe like Adonis Creed, Rocky Balboa, and Viktor Drago, to name a few. Each character has their own style of boxing, and from a gameplay standpoint, fall into three specific categories of fighter: The Swarmer, The Generalist, and The Slugger. There are signature moves unique to every character in the game, though, that really set them apart.

For example, if your playstyle leans toward faster and more nimble characters, you might choose someone like Scraps in the Swarmer class, which puts emphasis on speed. If you like slower, more heavy-hitting characters, then someone like Adonis Creed in The Generalist class is going to be more up your alley. We created the game with several unique settings and environments where players can duke it out, which, when paired with a rousing soundtrack, will get you pumped to step into the ring. PS4B: How long did it take to develop Big Rumble Boxing: Creed Champions for its console debut? Were there any particular hurdles or obstacles you had to overcome during development?

The whole process took a little under two years from start to completion, and our main vision when we were creating Big Rumble Boxing: Creed Champions was putting consoles at the forefront. We wanted to deliver the Creed and Rocky experience to as many players as possible and to do that, we worked hard to make boxing in the game feel intuitive, so absolutely anybody can pick up and play anytime. This means the team has put an intense focus on the techniques found in boxing, such as slipping, parrying, and so forth, to ensure it all feels right, and feels fun for the player.

We believe Creed Champions strikes the perfect balance between smart design features and playability, that’s easy to pick up for casual players and also challenging enough for the seasoned fighting audience. For example, if you’re playing on the Nintendo Switch, you can quickly take a Joy-Con and give the other one to a friend for a quick fight! 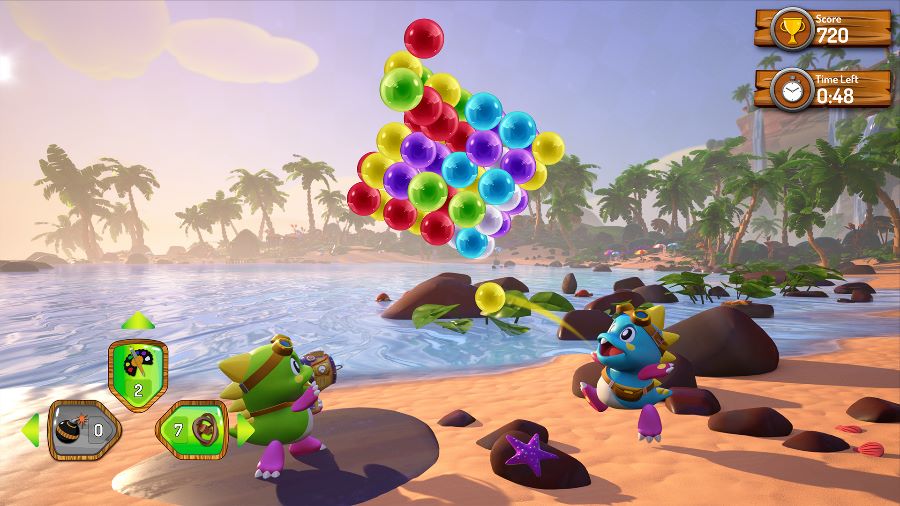 PS4B: Are you currently working on any other games that might land on PlayStation or Nintendo Switch?

We recently released Puzzle Bobble 3D: Vacation Odyssey across PlayStation 5, PlayStation 4, and PlayStation VR, which is our own take on the classic nostalgic bubble-popping franchise audiences have come to know and love over the past 35 years. With our partnership with TAITO, we were able to deliver our own unique twist to the franchise with the goal to delight both veteran fans and new players alike.

We are also working on a bunch of exciting projects at the moment, but nothing I can share details about at this time! We’d love as many gamers as possible to go and check out Big Rumble Boxing: Creed Champions today! It’s easy to pick up and play, but it takes time to really master, again, just like the great arcade classics. You can also check out our previous award-winning VR title, Creed: Rise to Glory, which just passed 1 million units in sales and remains in the top ten VR titles on PlayStation.

To learn more about what our team is working on, follow Survios on Twitter, Facebook, and Instagram. We love sharing upcoming news and releases with the community, so this is the best place to keep an eye out for studio updates!