WitchSpring3 [Re:Fine] – The Story of Eirudy from ININ Games and STUDIOARTDINK is a turn-based RPG on Nintendo Switch. Eirudy wants to bring life to the many dolls in her basement, for which she’ll have to hunt down monsters in order to be able to use their vitality to fill up the Soul Stone that will give the dolls life. She already tried this with a small vessel, a black rabbit doll that barely managed to come to life. Given that it’s an imperfect vessel that has little to no vitality, she calls it Failur – as in, a failure. She sets out to harvest more vitality so that she can power up Emilia, a doll that sits in the corner of the basement, next to the ladder that brings her to the main room of her house, where a giant magic book and a boiling magic pot are displayed front and center.

You can move Eirudy around with the left analog stick and will automatically collect any items out on the field by approaching its sparkly spot. You won’t be able to constantly harvest an item over and over again since each harvest point will have a cooldown period before you can collect from it again. For example, if Eirudy is low on mana points, she can eat a moist misty leaf to recover a little bit. There’s also the option of finding some items that can be combined to craft new items to aid you. 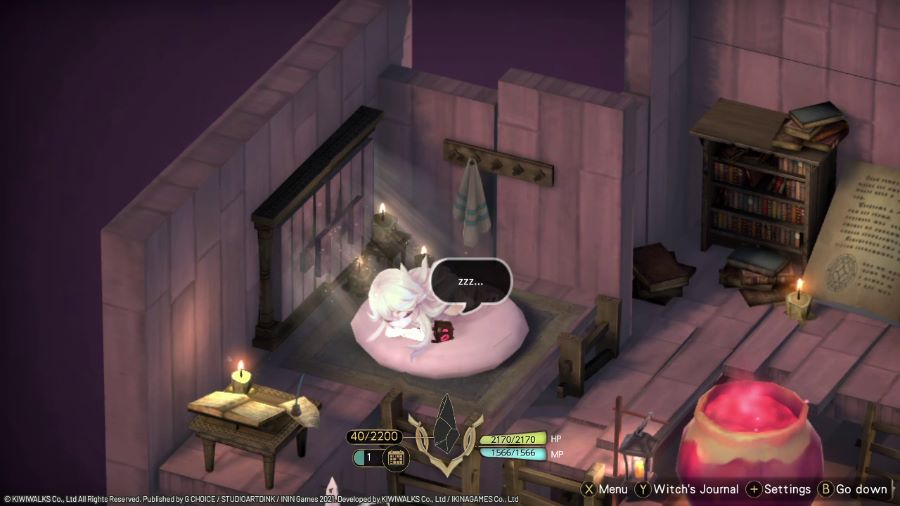 You can use the magic pot at your house to create new items or magic by using the magical ingredients you collect. You can craft tools (such as a sleeping bag to recover your hit points and magic points when out on the field while also saving your progress) and magic circles to aid you. For example, you can craft a lesser boost MC as a supportive magic circle by using ember shards, cotton, and some berries. What this will do is amplify the power of the central MC for a total magic effect boost of 120%. Not a huge boost, but a boost that could allow you to defeat an opponent before it gets a chance to counterattack.


Eirudy will have main magic circles and support magic circles. A main magic circle would be, for example, the one set for her fire magic attack. By combining this with a lesser boost MC you craft, you can increase the damage dealt by the fire spell. You do need to be aware that while the lesser boost MC will improve the damage that your fire spell deals, it will also increase the mana points required to cast it, so there is a trade-off to consider. You could craft a focus MC to reduce the MP cost to offset this, as long as you have the right ingredients.

After she enters a battle, you can select between using a regular attack, casting a spell, using an item, guarding to lower any potential damage you’ll receive from enemies while also recovering some of your hit points and mana points, or summon one of your dolls to aid you. When in a fight, you can only summon one doll per turn and will be limited to having a max of three dolls under your command for that battle. You could also try to flee, but if you fail to do so, you will end up vulnerable to a counterattack. Your regular attacks can also be powered up, but you will do this by trading off some of your hit points while dealing a powerful blow. 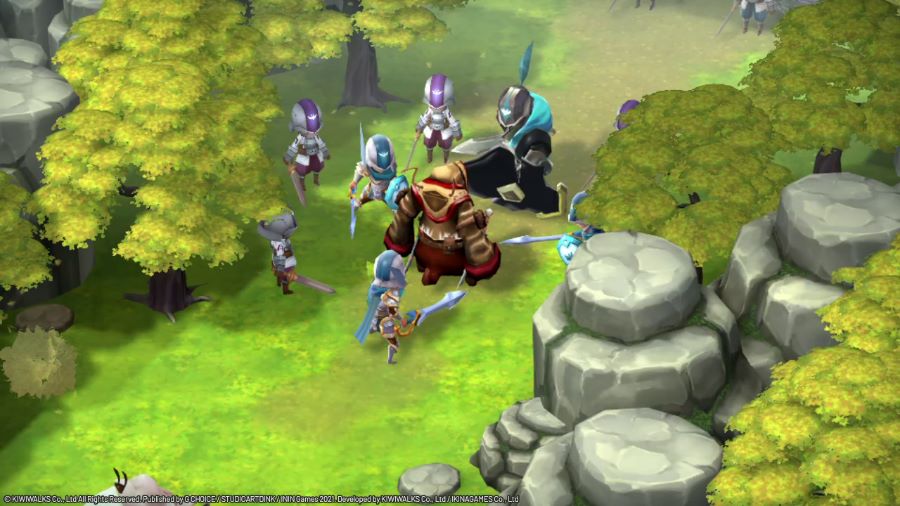 Every time you defeat an enemy, the Soul Stone will fill up a bit with the vitality you harvest from it. Some of the enemy’s vitality will go towards powering up the Soul Stone, and the rest will be used to restore the witch’s hit points. Before taking on enemies, you will get to learn their name, some general info on them, as well as their total hit points, strength, magic, agility, physical defense, and magic defense, so that you can know what you’ll be going up against, and if you should battle it or avoid it so that you can maybe get more vitality for more dolls to summon to fight by your side.


Each doll you summon will have a different effect in battle. For example, Emilia, the first doll that you can summon into battle, can heal your wounds so that you can recover your hit points. Knowing this, you could go for a serial attack so that you can deal consecutive blows to your enemy while, as mentioned before, sacrificing a bit of your hit points. But if Emilia heals you after your opponent counterattacks – that is, if it manages to survive your serial attack – you can minimize the loss of hit points. Dolls can also be powered up by giving them more vitality after you wake them up, so if you’ve managed to collect your limit of vitality and can’t wake up a new doll, powering up the ones already under your command is a good idea. 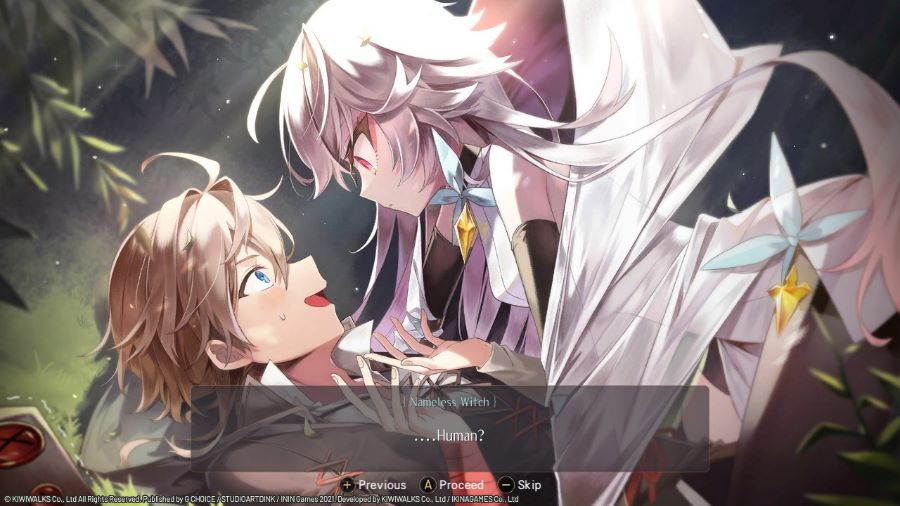 All major events will be recorded in the witch’s journal, so you can review them in case you forget what has happened and what you need to do next. The stories recorded in the journal and the goals to complete are what you need to pay attention to be able to move the story forward. But to be able to move the story forward, Eirudy will need to become stronger. To do this, you can schedule how she will train on a five-day basis by selecting the main magic circle at the center of her house.


Each icon on the training list will show you what effect training will have on her stats. She can do push-ups to boost strength by 3% and defense by 1%, punching to increase strength by 2% and agility by 1%, running to increase HP by 3%, sword training so that she gains 1% HP and 2% agility, as long as you’ve managed to boost your swordsmanship level, magic research to boost her magic by 1% and MP by 2%, while potentially unlocking new magic recipes, crafting research to increase her MP by 3% while also hopefully unlocking new tool recipes, magic shaping to increase her magic attack by 2% and MP by 1%, or magic burst, which will increase her magic attack by 1%, MP by 1%, and HP by 1%. As you can see, there are plenty of options to customize her build based on your playing style. 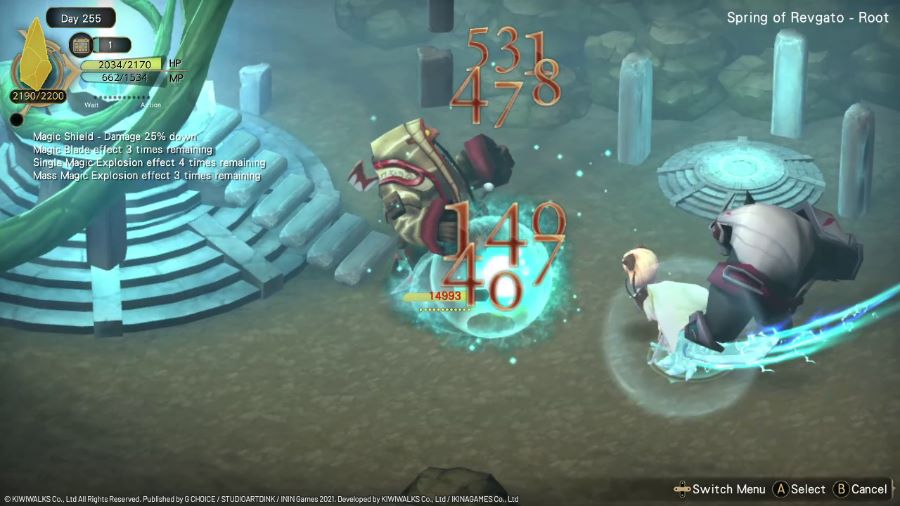 WitchSpring3 [Re:Fine] – The Story of Eirudy is out on Nintendo Switch with a $39.99 asking price, straight from the Nintendo eshop. And if you want to go physical, you can check the Standard, Collector’s Edition, Standard and Plushy Bundle, and Collector’s Edition and Plushy Bundle for WitchSpring3 [Re:Fine] – The Story of Eirudy from Strictly Limited Games.

Disclaimer
This WitchSpring3 [Re:Fine] – The Story of Eirudy review is based on a Nintendo Switch copy provided by ININ Games.

Demon Slayer -Kimetsu no Yaiba- The Hinokami Chronicles Out Next Week