Jars is a puzzle/tower defense game from Daedalic Entertainment and Mousetrap Games with a dash of a Tim Burton aesthetic thrown in for good measure. Check our Jars review!


Jars is a puzzle/tower defense game from Daedalic Entertainment and Mousetrap Games with a dash of a Tim Burton aesthetic thrown in for good measure. The goal is simple: destroy all jars by using your minions to defend against the creatures that will burst out of them. You’ll play as Victor, who ventures down into the family basement where he will discover the creatures that hide in the shadows. What secrets are buried under the house? What’s the nature of the mysterious book he finds? And why are some of its pages missing?

As you get started, you’ll notice there are going to be good jars and bad jars. Good jars will be marked in green and will contain either the minions that will be used to defend against the enemies or an item for your inventory, or they will be marked in red and will pop and reveal an opponent for you to beat. And to make things more fun, some jars will have random contents that you won’t be able to see until you break them open! 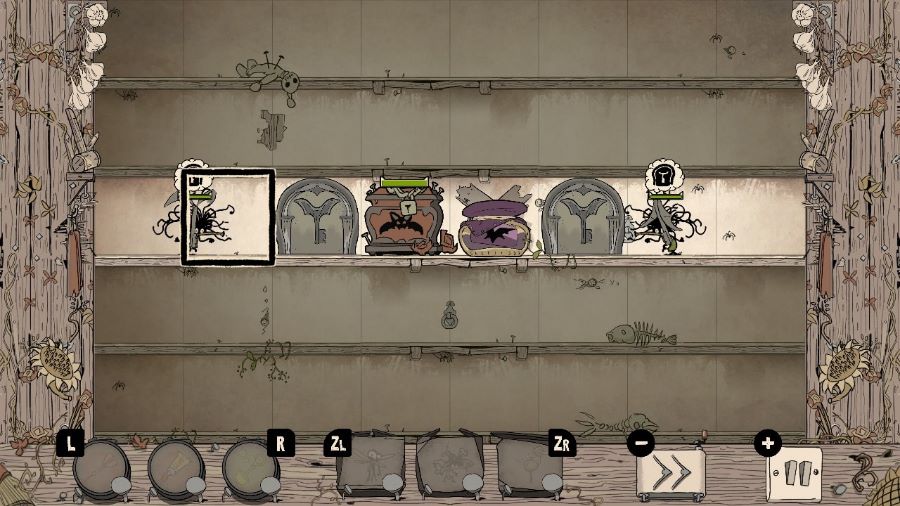 You can play Jars either with the Nintendo Switch Joy-Con or use the console’s touchscreen when playing in Portable or Tabletop Mode, or when playing the game on a Nintendo Switch Lite. You will learn the basics by playing the first handful of stages. You’ll move a cursor around the screen with the left analog stick or the D-Pad, breaking jars with the A button. The minions in your inventory can be deployed by selecting them with the ZL and ZR buttons, choosing where you’ll place it, and then pressing the Y button.


You can speed up the action with the – button, and can pause with the + button. If you have any useful items in your inventory, you can select them with the L and R buttons and use them on a target by pressing the X button. These items will include deadly darts that can be used to deal considerable damage to enemies, or glue that will make enemies stick around, not being able to move for a bit. Enemies will be able to move up and down the ladders on each stage, but most of your minions won’t be able to, so you’ll need to plan accordingly. A mosquito is a great minion since it can move around each floor, but it doesn’t deal much damage and doesn’t have a lot of hit points, so it can be easily defeated.

As you clear each stage, you will be rewarded with what seems to be a bizarre red energy thing. This is life essence, and you can collect some extra during each level from the enemies you defeat by protecting the batteries that will collect the life essence of the enemies that are downed. Be sure to protect batteries so that you can earn upgrades – more on these in a bit. Completing stages and meeting new minions, enemies, and finding new items will also add new entries to your encyclopedia, so that you can learn more about them. For example, the aforementioned dart is described as a dagger that can deal damage to one nasty – the name Jars gives to enemies. Minions and nasties will have a lot of text for you to read, as well as an image that cuts right through them to show you what’s inside! 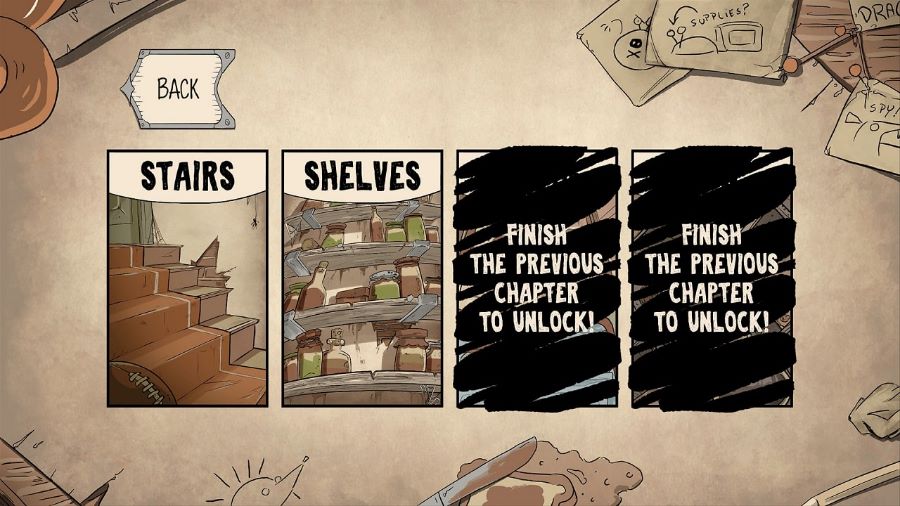 Progressing through the game will unlock perks that will allow you to experiment on your minions so that you can use the results to overcome the increasing difficulty. The perk must fit within the shape inside of the minion, or else you won’t be able to use it! You can also swap out active minions, so that you can work on different groups and loadouts that will make it possible to beat each level in Jars. These perks include, for example, soap solution, which upon a minion’s death will protect all assets in the level for a bit. When you get the soap solution, you’ll realize it’s circular, which means you’ll only be able to equip it on your hedgehog, since it’s the only one from your starting minions who has a circle shape – along with two other shapes.


The life essence that you collect can be used at the shop. You will get a chance to buy new minions, such as the mighty wasp. It might be a bit slow, but it certainly packs a punch Buying new minions will be a must, since each minion will have a different general type, and some levels will require that you have specific types of minions in your team – such as requiring that two of your minions are of the flying type. Other stages might ask that you leave behind one of your minions, which could have you at a disadvantage!

You can also use all of the essence you collect to purchase more perks for your minions of varying shapes and effectiveness, so that you can make every available customization slot count. Be sure to pay attention to how each perk affects your minions, because while they all provide them with some stats boosts, they might also lower other stats, which could be fatal for some of your weaker minions! If you add a berserker perk to a unit with low hit points, then you’ll increase it’s attack power while lowering its hit points even more, which could mean that a tiny nasty could defeat it in a couple of hits! 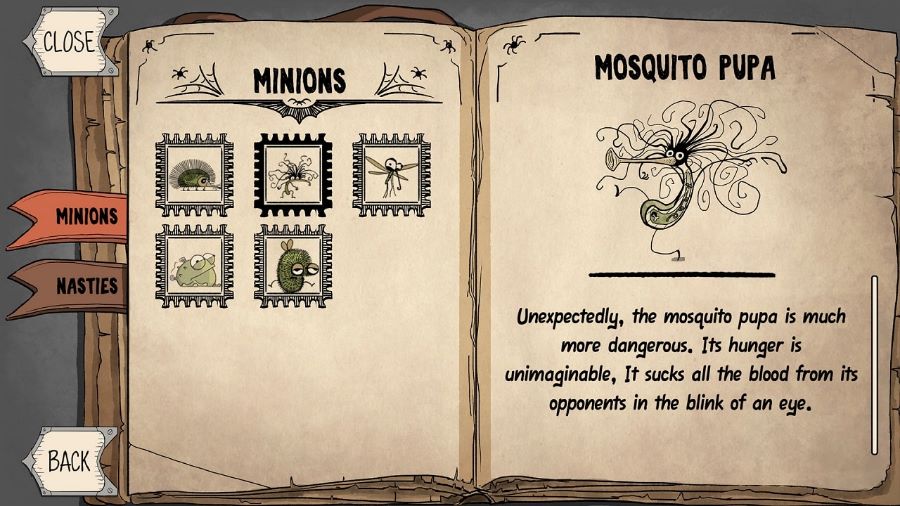 You will end up unlocking hero units as you complete each of the game’s chapters, which will feature their own sets of stages. Heroes can be controlled directly with the left analog stick or the D-Pad, smashing nearby jars with the A button. Heroes can use a dash ability to quickly move around the screen. All of this can also be done by using the touchscreen. As enemies are defeated, a hero will gain experience points and level up. When this happens, you will get to select from the available abilities to add to your arsenal. They can be slotted to the B, X, and Y buttons, and include things such as pulling nasties towards your hero, siphoning the life out of nearby nasties to heal the hero, or focusing on an opponent to unleash a more powerful attack.

When you lose during a hero round, you will lose some of the essence you collected. The rest of the essence will be used to permanently level up that hero, so that it can have better stats and be able to equip more perks during subsequent runs. This is very important, because before you start a new stage during a hero round, you’ll have to pick a modifier for the nasties. This could be having them move twice as fast for the next three rounds, increasing their attack power for one stage, or having the next stage include jars with an elite nasty type. 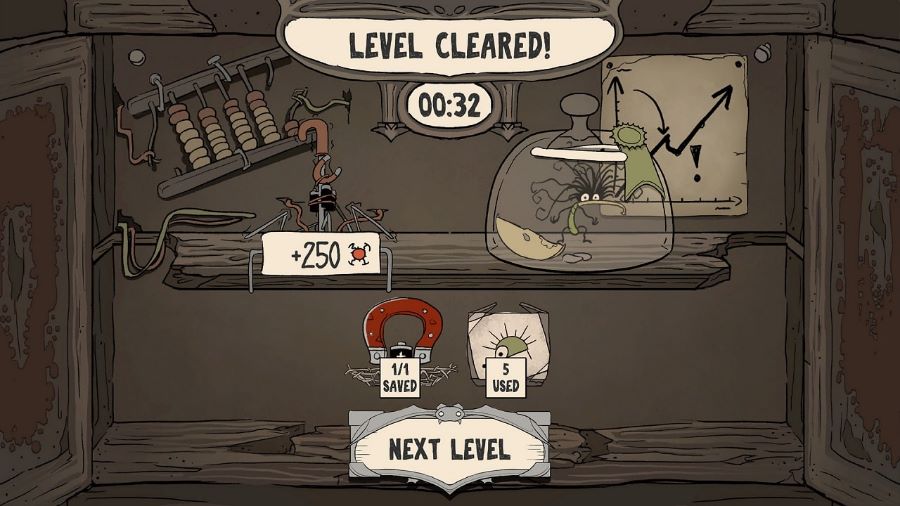 Jars is a very fun puzzle/tower defense game with an addictive gameplay cycle, thanks to its bite-sized stages that you can complete in a minute or two at most. You can also play as the heroes you unlock and enjoy their own mode which changes things a bit while increasing the difficulty with every stage you manage to complete, giving you the option to quit and keep all the essence you accumulate, or risking things a bit by trying to complete the next level. There’s hours of fun to be had with Jars, which is out now on Nintendo Switch with a $14.99 price. 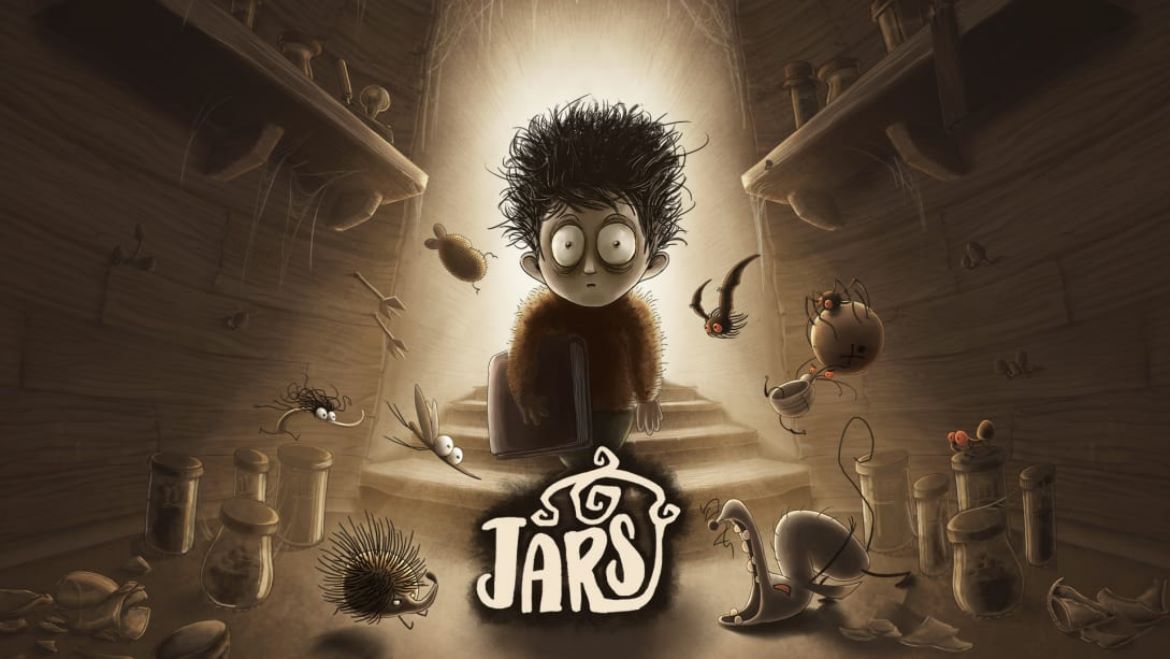 Disclaimer
This Jars review is based on a Nintendo Switch copy provided by Daedalic Entertainment.