Guts’ N Goals from PM Studios and ComeManu is a fast-paced brawl take on soccer on PS4. Learn more in our Guts’ N Goals review!


Guts’ N Goals from PM Studios and ComeManu is a fast-paced brawl take on soccer on PS4. At times, it feels like a mix between soccer, hockey, and baseball, since you can hit the soccer ball with a baseball bat to try and score more goals than your opponents, and with the soccer ball sorta behaving like a puck. You won’t be kicking the ball when you come into contact with it, as you would do in a regular soccer game. But hit the ball with your bat, and it will go out flying in the direction you’re aiming, bouncing off the walls, just like a puck would! 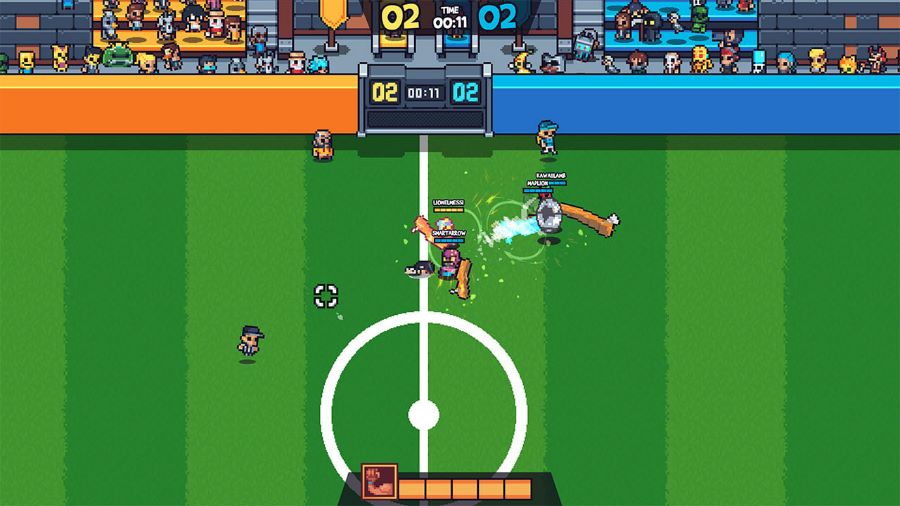 You will move your character with the left analog stick, aiming your baseball bat with the right one as you strike with the R2 or the Square buttons. You can also use your bat to damage opponents, either by swinging at them right away or by pressing and holding down the R2 and Square buttons to charge up your attack. If you’re damaged, you might want to step back for a bit so that you can recover your lost stamina. If, on the other hand, you want to defeat an opponent, you’ll need to hit it non-stop, or else it will also recover its stamina after a bit. The final minute of a match will introduce a roulette that will add a mutator to mix things up. This could, for example, make it so that the ball turns into a spike ball that will KO any character it touches!


You will start the game with only four characters unlocked (Skelly, Ellie, Butch, and Panther), but you can unlock another 31 characters! As you play more and more matches, you will earn crowns based on your performance. You can unlock a character by scoring a goal in your own net, for winning a match, for winning a match without being KO’d, or for scoring five goals. You can also unlock stadiums to play in, skins to dress up your characters, weapons to take the place of your starting bat, and even game modes! The aforementioned crowns can also be used at the shop once you’ve unlocked it. The shop is where you’ll unlock most of the extra characters in the game, as well as the additional skins to customize their look. If you want to 100% the game, you’ll have to complete the special challenges in the game, win dozens of matches, and win some matches while a specific mutator is active. Along with the standard Grand Prix option, you will also have a versus mode and can unlock a special MVP Hunter mode to test your skills in a roguelite type adventure with different bosses to beat, many paths to take, and cards that will boost your stats, add new skills, or lower your opponent’s stats.


Unlocking new characters isn’t just for looks since each character will have a special skill that you can use with the R1 button. For example, Skelly can throw a bone that acts as a boomerang, Ellie can throw two punches that will propel her forward, Butch will tie up an enemy and drag it around, Panther will teleport to a selected spot, and can teleport back to his initial location. Find the right character for you with the right skill to help you win, and you’ll be on your way towards unlocking a new Platinum trophy! 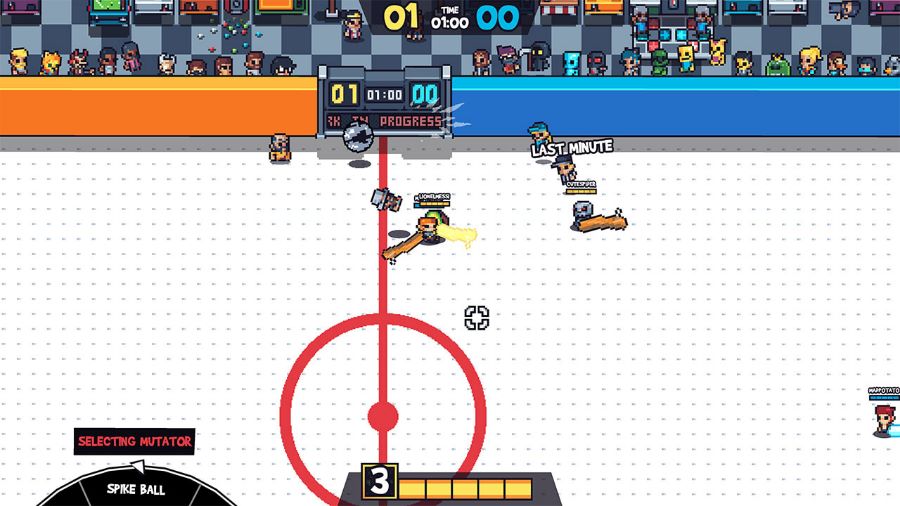 That’s right, Guts’ N Goals has a full trophy list with sixteen trophies in total, split into three Bronze trophies, three Silver trophies, and thirteen Gold trophies. One of the trophies will require a bigger time investment since it asks that you unlock all game modes in Guts’ N Goals. As for the rest, you will get your first one for completing the short tutorial. After this, several will pop as you unlock a new character, a new stadium, and a new weapon. You can also get a trophy by playing a local versus mode, for winning a match, winning a challenge, beating the Grand Prix mode once, or for scoring a goal in your own net.


Guts’ N Goals offers some accessibility options to make it easier for some players to enjoy this experience. You can enable highlighting each team, highlighting the ball, highlighting the character each player is controlling, showing the attack range for your baseball bat, enable or disable screen shake, enable or disable the direction aid, which places an arrow below your character to let you know in what direction it’s aiming, or enabling or disabling the ball’s trail so that you can easily see where it’s going. 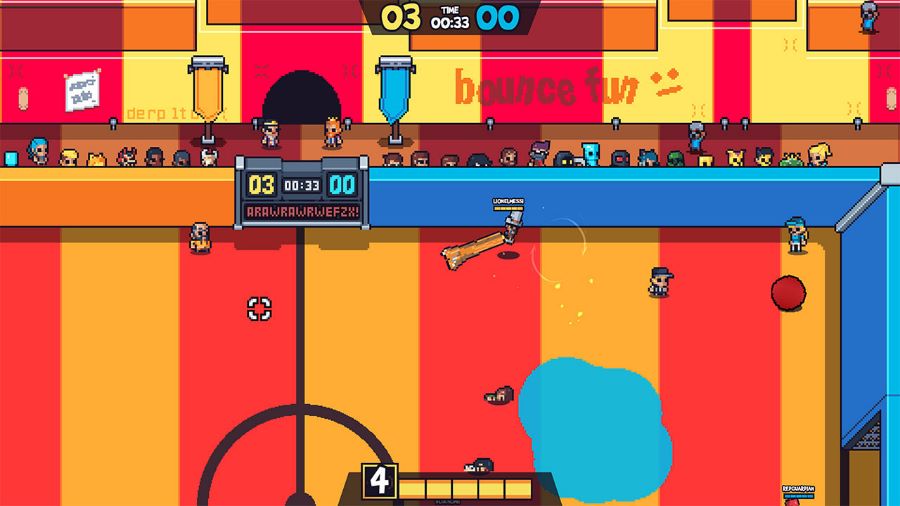 Guts’ N Goals is a fun arcade-style brawl take on soccer on PlayStation 4. Once you start playing, you get a feeling that it mixes soccer, hockey, and baseball. Use your bat – or any weapons you unlock as you play -, find the right character for your playing style based on their special skill, collect enough crowns to unlock new stadiums and skins and work on adding a Platinum trophy to your collection. Guts’ N Goals is out on PS4 with a $14.99 asking price. 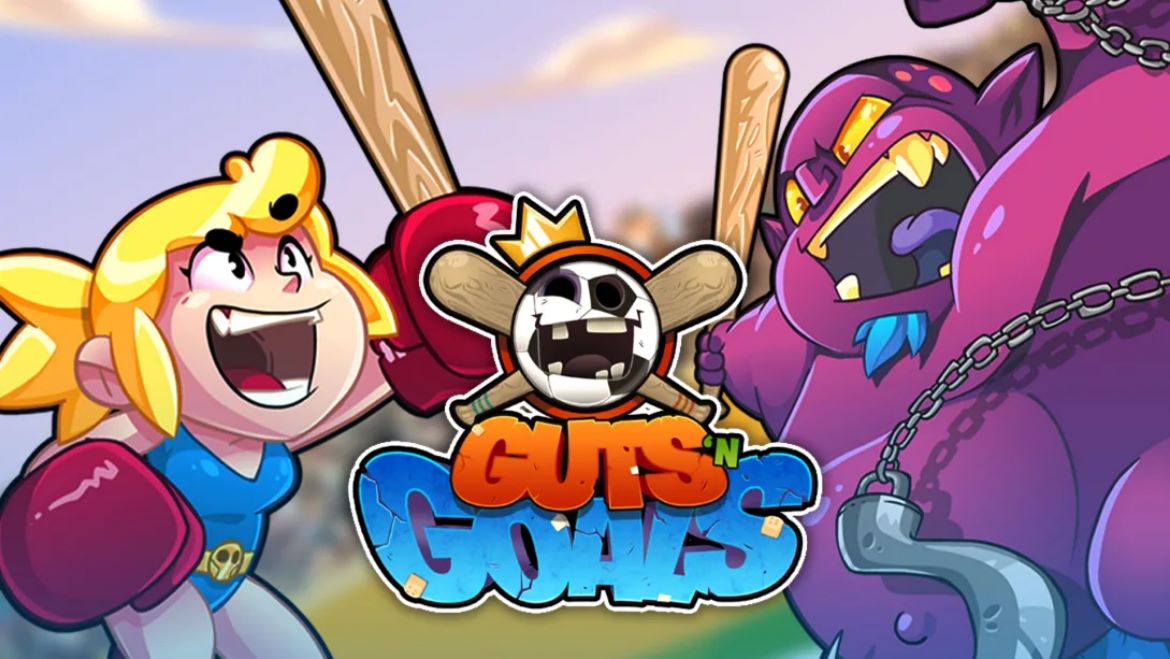 A fast-paced brawl take on soccer

Disclaimer
This Guts’ N Goals review is based on a PlayStation 4 copy provide by PM Studios.