SkateBIRD from Glass Bottom Games is a new take on the skateboarding genre on Nintendo Switch. Learn more in our SkateBIRD review!


SkateBIRD from Glass Bottom Games is a new take on the skateboarding genre on Nintendo Switch. If you want to quickly sum things up, this would be an indie take on the question “What if an indie Tony Hawk Pro Skater, but with birds?” Glass Bottom Games took the project to Kickstarter back in 2019, asking for $20,000 to finish the game’s development. Thanks to the support of more than 2,500 backers, the campaign ended with more than $67,000 in funding, which made it possible to also reach some stretch goals.

These stretch goals include a Photo Mode, adding more shapes to the game so that more types of birds could be included, an outdoor skatepark, being able to pet the birb, adding customization options to make your bird stand out, a bonus level, as well as some additional side stories. Glass Bottom Games, will be working on some of the additional content on this list to be made available post-launch, so there’s some extra stuff to look forward to! 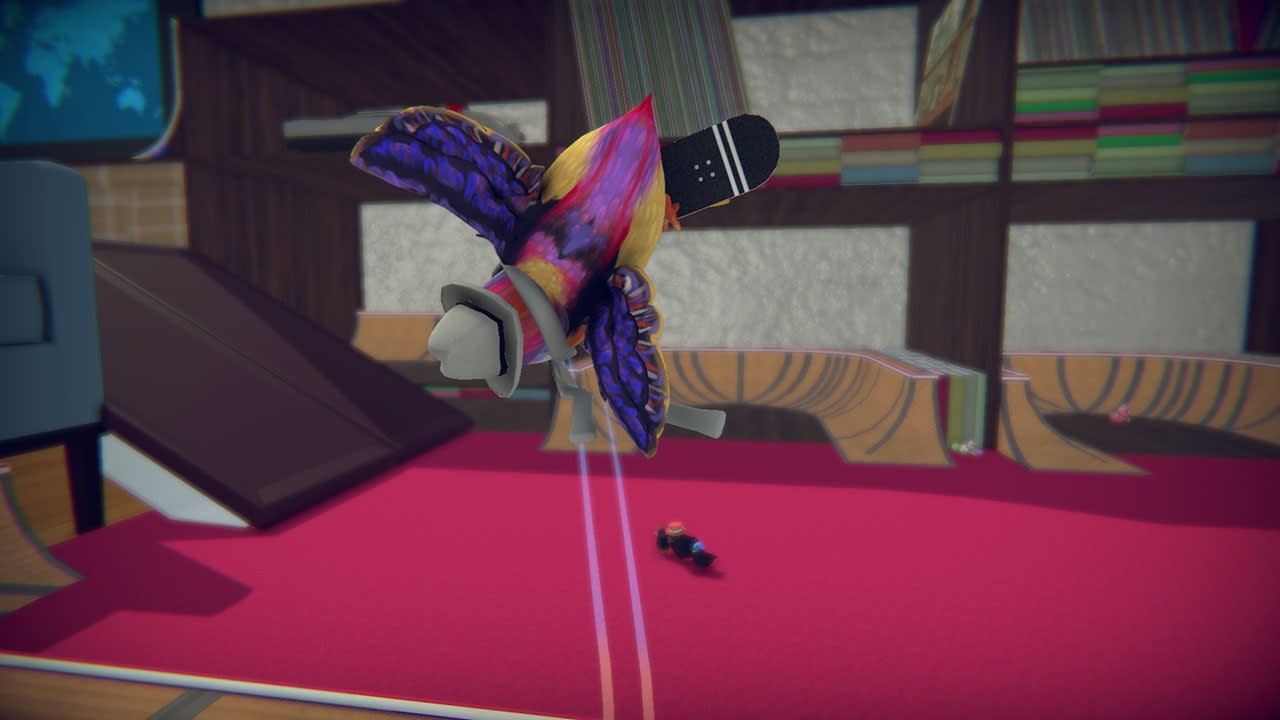 The story for SkateBIRD goes like this: your Big Friend – that is, the human owner of the birb you play as – used to enjoy skateboarding but has now hung up their board for good. Their job sucks, and they haven’t been spending as much time home with you as before. What is a lonely birb to do under this scenario? Use the mighty power of skateboarding to fix things! You might be new at this, but you’re going to give it your all to increase your following and take the bird skating world by storm. 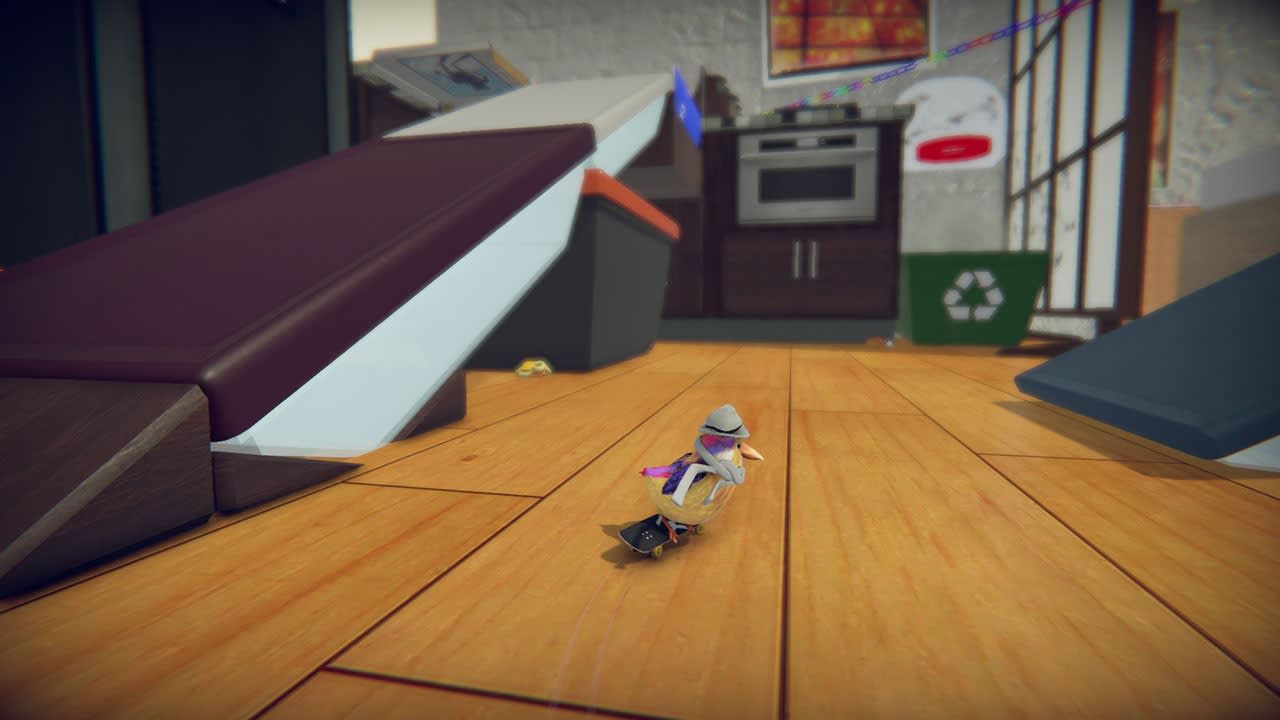 After that considerably long list of options, the next step will be to select what it will wear on its head. The first option is a pair of headphones, but you could also go with a leaf hat, a pirate hat, a rockabirdy hairstyle, a skater beanie, a skater hat work backwards, a sleeping cap, or a Valkyrie crown, to name some examples. You can also add some 3D glasses, an eyepatch, square glasses, or thick way feathers glasses. Then add a bandana, a bowtie, or maybe a scarf. Maybe your birb would like to have a cape? And maybe a cowbird belt would also be a great accessory. Pick your skateboard and the color of your wheels… and you’re set!

You’ll steer your bird with the left analog stick as it rides around each area with its skateboard. You can press the B button to ollie, preparing your jump and releasing the button to trigger it. You can do a fliptrick with the Y button. When close to a rail, press the X button to do a grind trick. When grinding, you’ll need to keep the meter centered so that you don’t fall over. Surfaces you can grind include rails, the top of skate ramps, the top edges of a bowl, and more! While jumping, press the B button again to do an air ollie, which can extend the height of your jump. You can also use the left analog stick to initiate a manual, and you’ll once again have to keep the meter centered to avoid bailing.


Since given the size of your birb each area will feel huge, whenever you’re stable and grounded, you can press down on the D-Pad to set a custom reset point, to which you’ll be able to warp by pressing up on the D-Pad. You can’t do this whenever you want since some missions will prevent you from setting custom reset points in order to balance things out. The A button can be used to do a grabtrick when in the air. The R button can be used to do a spine transfer if there’s a ramp on the other side. 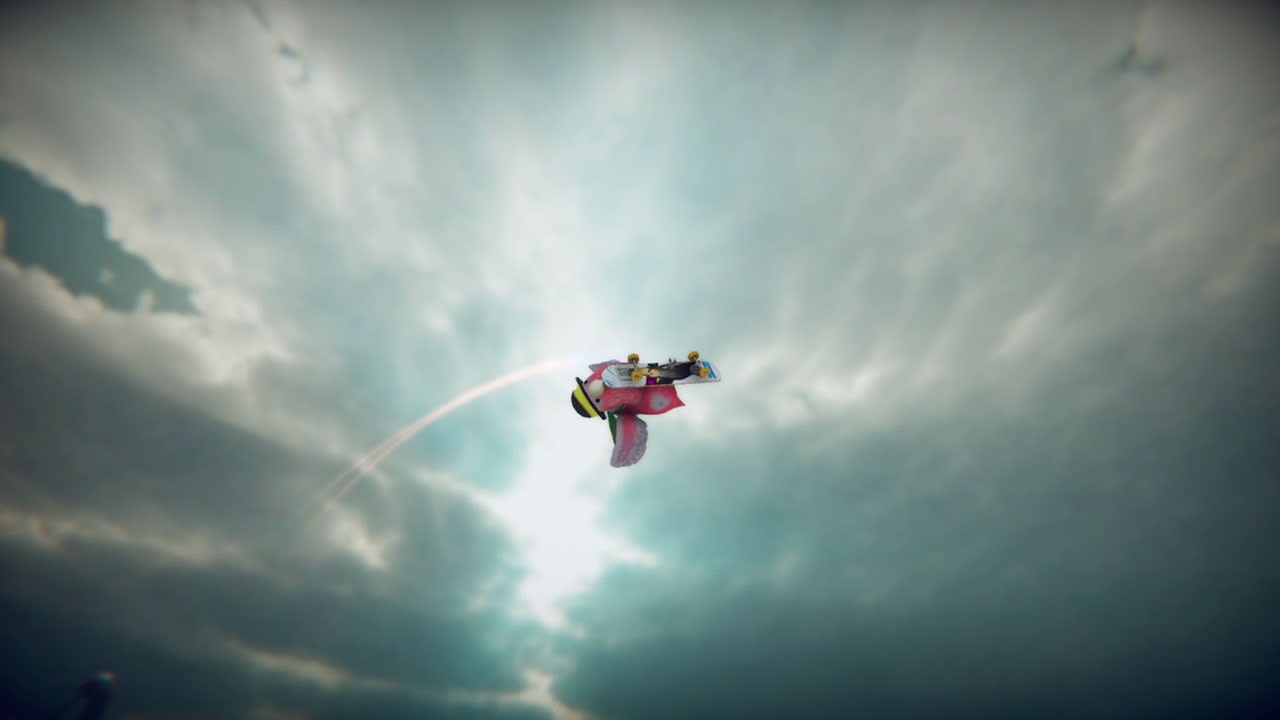 As you perform tricks and ride ramps, you’ll start to fill up the FANCY gauge in the lower-left part of the screen, which will let you know how high you can fly when riding ramps and how fast you can go. As long as you ride on your skateboard and go up ramps and perform tricks without falling off, you’ll build up more FANCY. The taller a ramp, the more FANCY you’re going to need to make it all the way to the top, so you might want to snake around for a bit to gain some extra momentum and build up your FANCY.


As you play through each stage in the game’s story, you will get to take on different missions. You’ll start with doing an ollie and a fliptrick, then move on to finding Big Friend’s charger. After this? Perhaps you could collect eight crushed cans and then grind around the soup bowl, followed by grinding around the noodle bowl. You can also search around for new tapes to add more songs to your potential mixtape, new clothes to customize your birb, new decks to ride around each area, and new wheels to customize your skateboard. 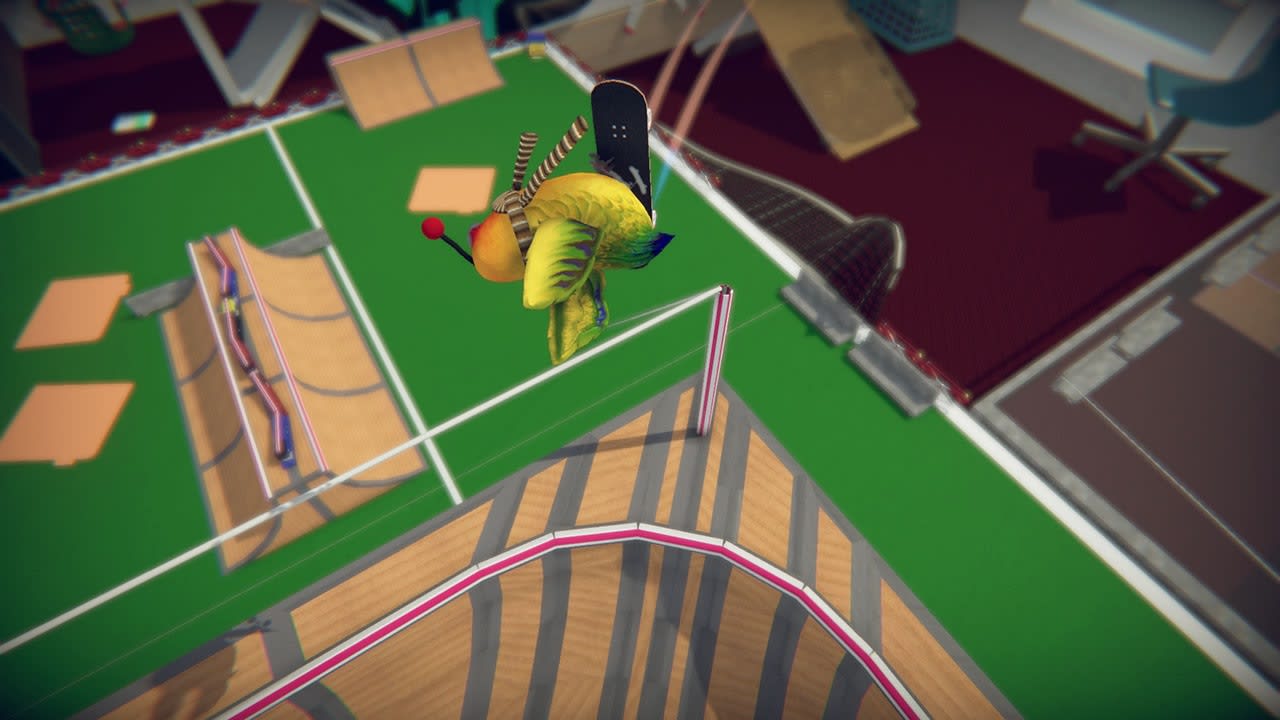 SkateBIRD is a fun indie skateboarding game with lots of birbs, allowing you to customize your experience as you boost your score, collect new clothes and new music tracks for your mixtape. It does sometimes have some camera issues after you fall from skateboard when you end up on a corner or fall from a high area, but it doesn’t break the experience. You can go into the options menu and configure the look sensitivity, pushing, breaking, steering, and twisting ead zones, mild-push boost, and steering boost so that you can find the right mix for your time with SkateBIRD. The game is out today on Nintendo Switch with a $19.99 asking price.

Disclaimer
This SkateBIRD review is based on a Nintendo Switch copy provided by Glass Bottom Games.