Cruis’n Blast is finally out on Nintendo Switch! After racing for a while at the arcade, the latest entry in the series is ready to go on console. Learn more in our Cruis’n Blast review!


Cruis’n Blast is finally out on Nintendo Switch! After racing for a while at the arcade, the latest entry in the series is ready to go on console. Raw Thrills released Cruis’n Blast as an arcade game back in 2017, as the sixth title in the long-running franchise which got its start way back in 1994 with Cruis’n USA, which, along with Killer Instinct, were then promoted as games running on the Ultra 64, which we would then get as the Nintendo 64 home console. Cruis’n USA was a colorful, over the top racing game way back then, and Cruis’n Blast certainly does what it needs to do, giving us an even crazier but fun racer on Nintendo’s latest console. 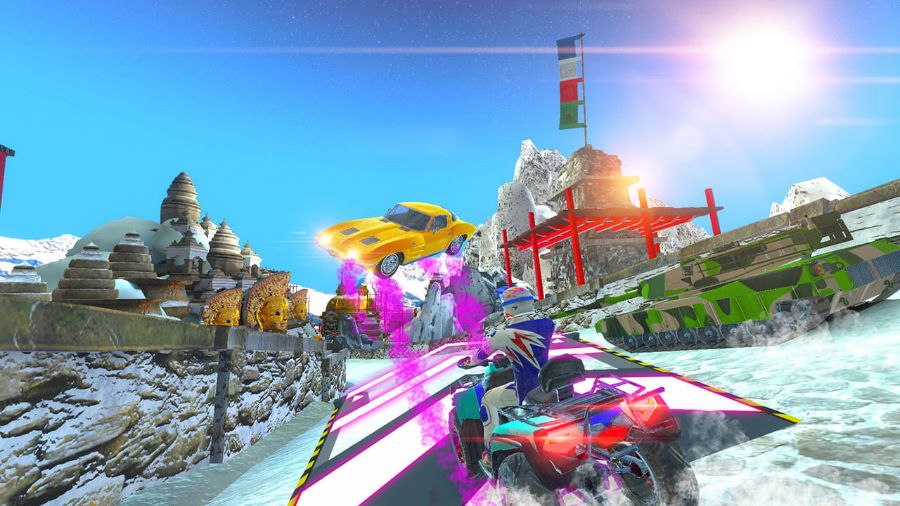 While Cruis’n Blast is technically the sixth game in the series, with the game being Cruis’n on the Nintendo Wii which launched way back in 2007, that game was actually to be a port of The Fast and the Furious arcade game. During the whole porting process, the license for The Fast and the Furious ended, as is usually the case for licensed properties, so they removed the license, launched Cruis’n on the Nintendo Wii and that’s that. Before that, the previous game was Cruis’n Velocity on the GBA, so the last time a Cruis’n game was on a home console was when Cruis’n Exotica launched back in 1999.


Cruis’n Blast has three different modes for you to try. There’s Single Player, which you’ll need to play to unlock new tracks, new rides, and new colors, so that you can customize the look of your favorite vehicle. This is also split into Cruis’n Tour, in which you’ll race for gold in four race series, with the Easy and Normal difficulties unlocked, so that you can gain some experience under your belt before unlocking the Hard and Extreme difficulty settings. You can also play in Classic Arcade, which allows you to run on the arcade version’s tracks, Time Trials, so that you can try to beat the record time for each track, or Single Race, during which you will race around a single track and give it your all. 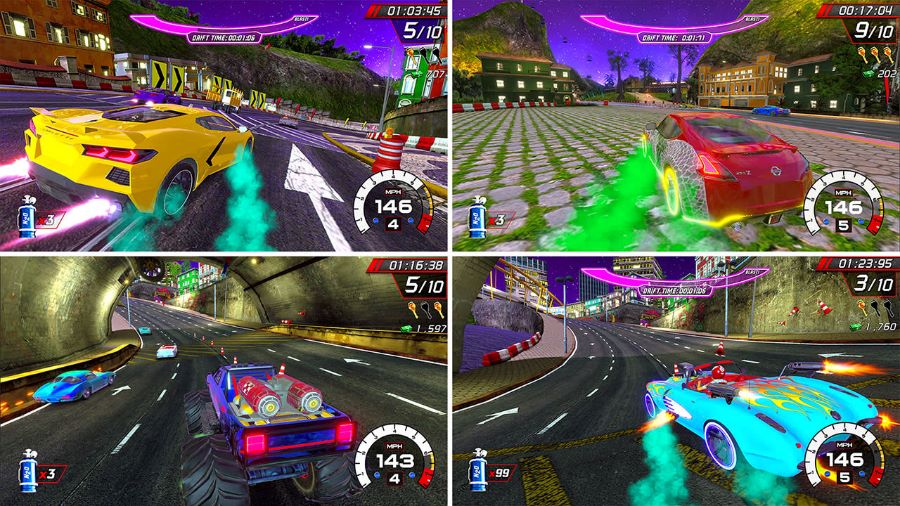 On top of the Single Player options, there’s also a Multiplayer Mode that will allow you to play in local splitscreen as you try to outsmart and outrun your opponents, just like we used to do on many a Nintendo 64 release back in the day! And then there’s the Local Play Mode, for which you can create a lobby of your own to host or find a lobby currently run by another player in your vicinity, so that each one can play on their own console.


The controls are easy to understand, since you’ll be steering your ride with the left analog stick, accelerating with the A button and breaking as needed with the B button. Double tap on the A button to perform a wheeling, and to get a short speed boost. You can also activate tilt controls, or have the game auto-accelerate for you, which is a great option for younger gamers. Some curves will be trickier than others, so you’ll need to press and hold down the R button to drift, so that you can continue to go at a high speed while you hug the track. And for when you need an instant extra boost, just press the L button to activate the titular Blast feature – that is, as long as you have a charge left! Oh, and you can also change your view with the Y button to find the right camera for your runs.


There are more than 20 vehicles to play as. Notice that I say play as and not ride, because some of these vehicles are actually “vehicles.” Why the air quotes? Because on top of driving several racing cars, a school bus, a fire truck, a futuristic motorcycle, a quad ATV, a tank, a 1959 Corvette, a monster truck, or a helicopter, you’ll also get go through each of the game’s tracks in some not as traditional “vehicles.” These include a triceratops, a unicorn, as well as a very glossy hammerhead shark. 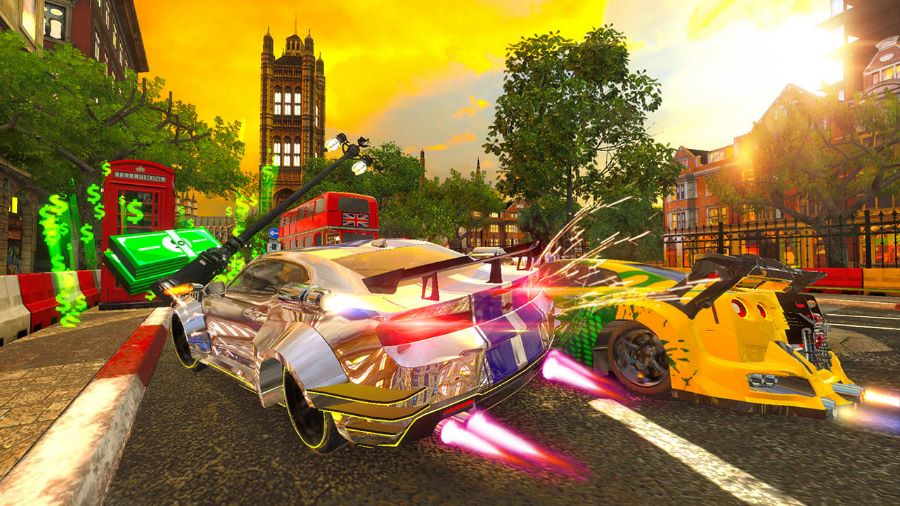 Each of these vehicles will have different stats for you to consider, and you can also customize them as you level up, spending the money and keys you obtain to unlock more and more vehicles. The stats to consider are speed, acceleration, blast, weight, and offroad behavior, so that you can find the right ride not only for your playing style, but also for the tracks you’ll be taking on. Painting a car can give it a look to match your personality, and once you level up a car for the first time, you might want to give it a neon makeover to have it shine on the track!

You’ll earn experience and money based on your performance, depending on the number of stunts you perform, how much cash you picked up along the way, and what spot you placed at for the race. Don’t expect to win your first race right away, especially if its your first time playing a Cruis’n game. You’ll first need to learn a tracks layout, find the right places to get a quick speed burst so you don’t end up losing momentum by crashing into a wall. You might find some shortcuts that seem like a good option, but if, say, your vehicle is not good at offroad racing, you might end up losing more time instead of cutting ahead of the pack. 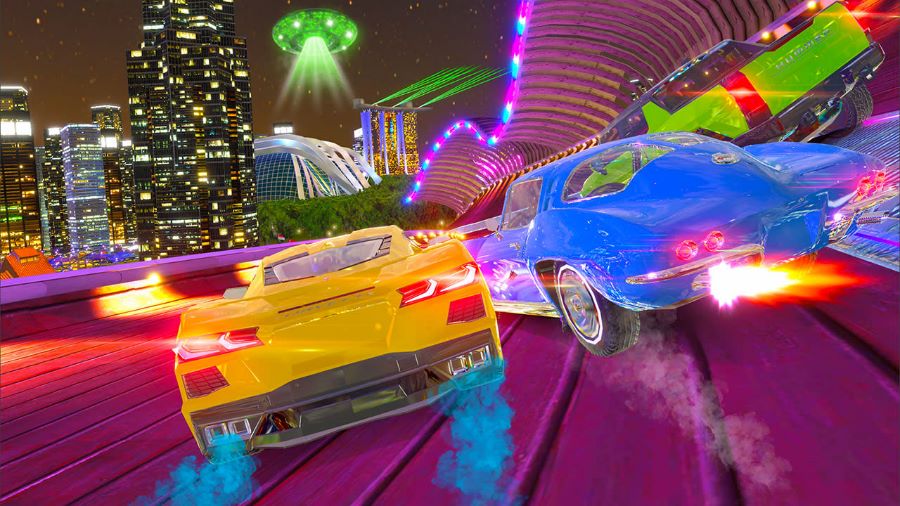 If you’re looking for an arcade-style racer on Nintendo Switch with tracks that can be completed in a few minutes thanks to the many speed boosts, jumps, and speed boost jumps in their layout, with a colorful and shiny presentation, and then option of playing on your own, against others with the splitscreen multiplayer, or with the local versus option, then you’re going ot love this one. As a fan of the series going back to the Nintendo 64 days – and having played a ton of the Ultra 64 version of Cruis’n USA and Killer Instinct – I had been looking forward to taking this one out for a spin. I’m here to report that it’s a fun game and Raw Thrills has certainly stuck the landing, giving us the original arcade version as well as an expanded mode with sets of tracks to unlock as you aim to complete each your in the top 3 spots. Cruis’n Blast is out on Nintendo Switch with a $39.99 price.

Disclaimer
This Cruis’n Blast review is based on a Nintendo Switch copy provided by Raw Thrills.

A Juggler’s Tale Out On September 29