Cardaclysm: Shards of the Four from Elder Games and Headup Games is a procedurally generated collectible card game with a dash of RPG elements. You’ll take on this adventure as a dark wizard who bit more than it could chew. Unfortunately, this means you’ve now unleashed The Four Horsemen of the Apocalypse and all of their minions upon the world! This is bad. Really, really bad. You must, therefore, take tour magical cards and send every creature back to their dimension before the apocalypse destroys it all. Oh, and, you know, before the old wizard council finds out about all of this. 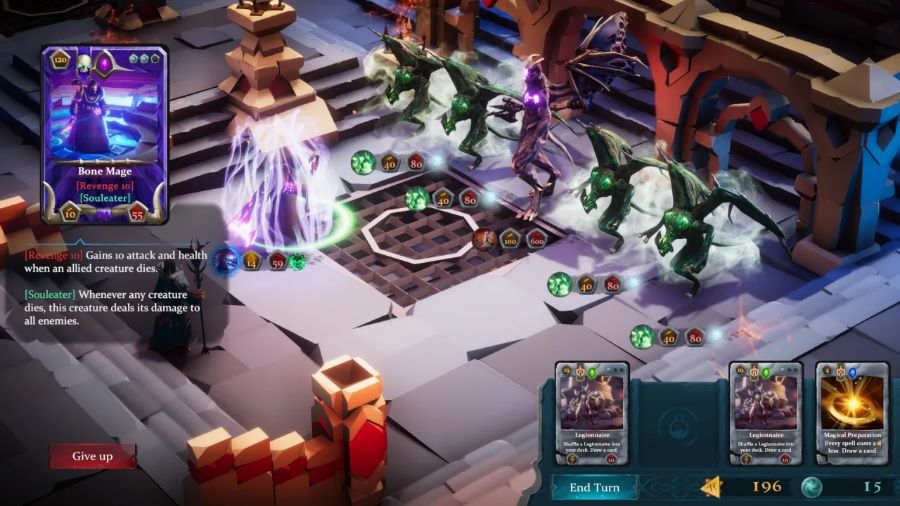 You’ll be collecting new creature cards and spell cards during your journey so that you can outsmart and defeat the many opponents you will face. Given its procedurally generated nature, other than the tutorial that will teach you all of the basics, you’ll never know what you’re getting yourself into, so you’ll have to plan accordingly. A good deck with a solid balance of standard creatures and spells available at a lower casting cost, as well as more powerful options that pack a punch, will keep you alive.


Your primary resource will be golden runes. These will be used for summoning creatures into play or from casting spells. When you start a battle, you will begin with the number of golden runes you have collected, and the total will be replenished after the fight is over. Each creature and spell will have a set cost, and you can’t put them into play if you don’t have enough golden runes, as well as enough soul orbs. Soul orbs are the secondary resource, and they’re quite scarce, so you won’t end up finding that many in the realms. They’re important since creatures will have a cost of one to three orbs when summoned. 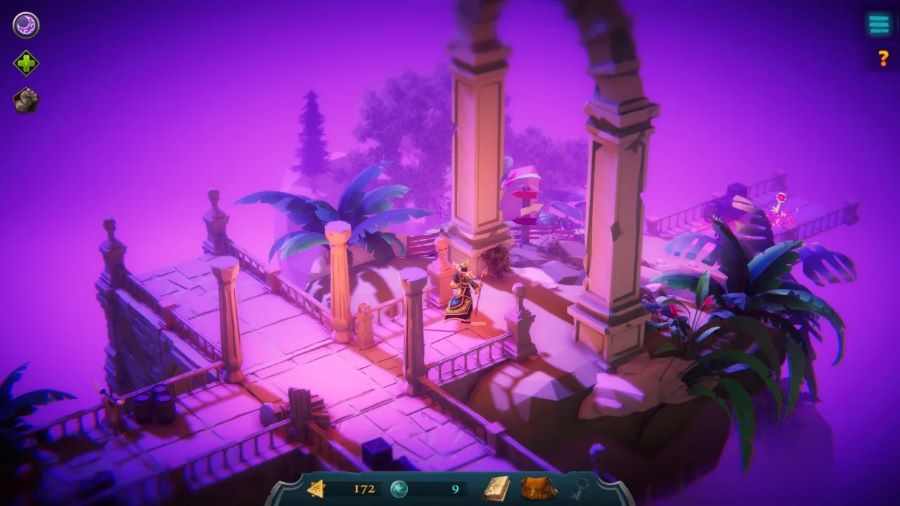 When a creature is in play, you’ll need to pay attention to the values and information on each card, such as attack damage and health, or if they can deal poison so that you can know what your creature can do, as well as what your enemies can do. If you have more than one card for the same creature, then you can place one on top of the other to upgrade it. For example, if you have two Dire Wolf in your deck, you can place one on top of the other that is already in place and turn the Dire Wolf into an Ice Wolf, with better and improved stats.


You can also upgrade cards on your deck when you have duplicates. Just open your Book of Magic to check which cards have duplicates, select to upgrade them, and then pick the cards that you will have on your deck for each battle. Do be aware that upgrading a creature will also increase how many golden runes it costs to activate. Once you start a fight, you can decide if you want to discard some of the cards on your starting hand so that they’re substituted with some of the other cards from your deck. After you complete a match, you’ll get to open a treasure chest to collect your loot.

You will be exploring each realm from an isometric perspective, moving your wizard around with the left analog stick, collecting golden runes and some soul orbs. When in battle, you can use the left analog stick to select the cards you want to play. Once they’re in play, you can select which creatures attack which enemies or what enemy you want to target with a spell. There’s also the option of playing the game using the Nintendo Switch’s touchscreen when playing the game in Portable or Tabletop Mode – or if you’re playing this one on a Nintendo Switch Lite. 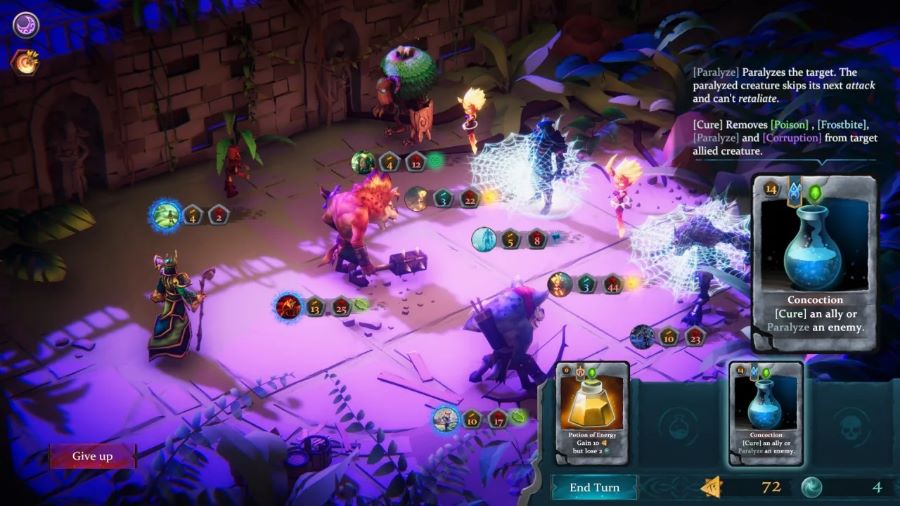 As you explore each area, you can also find artifacts to aid you on your quest. You could, for example, locate a wooden staff. After equipping it, all creatures you play will have one extra point of health during your first turn. Or you could perhaps locate a sylvan cloak that will shuffle a sapling into your deck. You can also find bonuses that will help you survive some of the more challenging battles. Having your creatures get a health boost of two hit points can make a huge difference for a deck with creatures of a low cost and an equally lower hit point total.

When you die – not if, but when – you will be sent into a new procedurally generated realm. While you’ll get to keep all of your artifacts, as well as the golden runes and soul orbs you’ve managed to collect, there will be some cards you will lose during the process. The game will let you know that they’re now in the graveyard but will at least give you some hope by telling you that if you continue to play and progress further, you might be able to win them back. 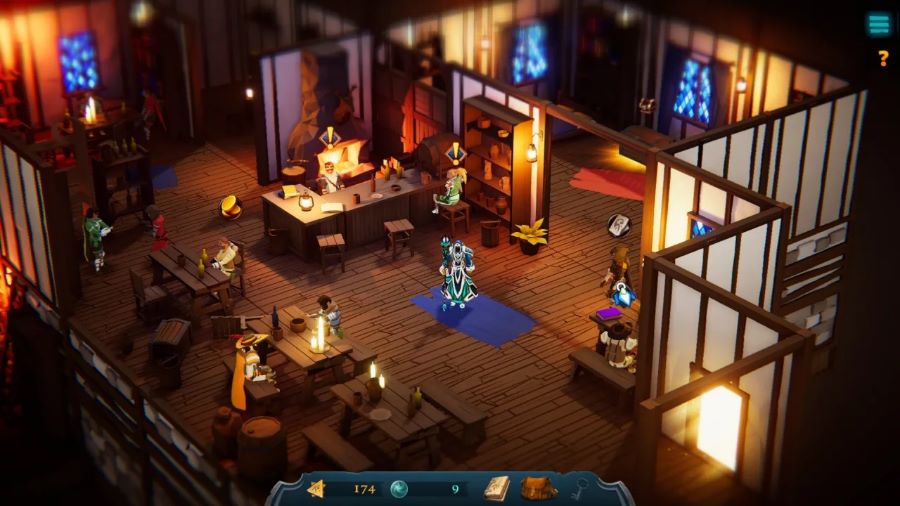 Cardaclysm: Shards of the Four has more than 240 cards to collect, over 40 artifacts for your wizard, lots of content to enjoy given its procedurally generated nature. You will need to learn from your mistakes as you improve your deck, collecting more golden runes and soul orbs to increase the number of creatures you can summon and the spells you can cast in battle. Bosses will probably be tricky the first couple of times you fight against them, but if you persevere, you’ll find the right combination to chip away at their health while keeping your wizard safe from harm. Cardaclysm: Shards of the Four is out on Nintendo Switch with a $14.99 asking price. 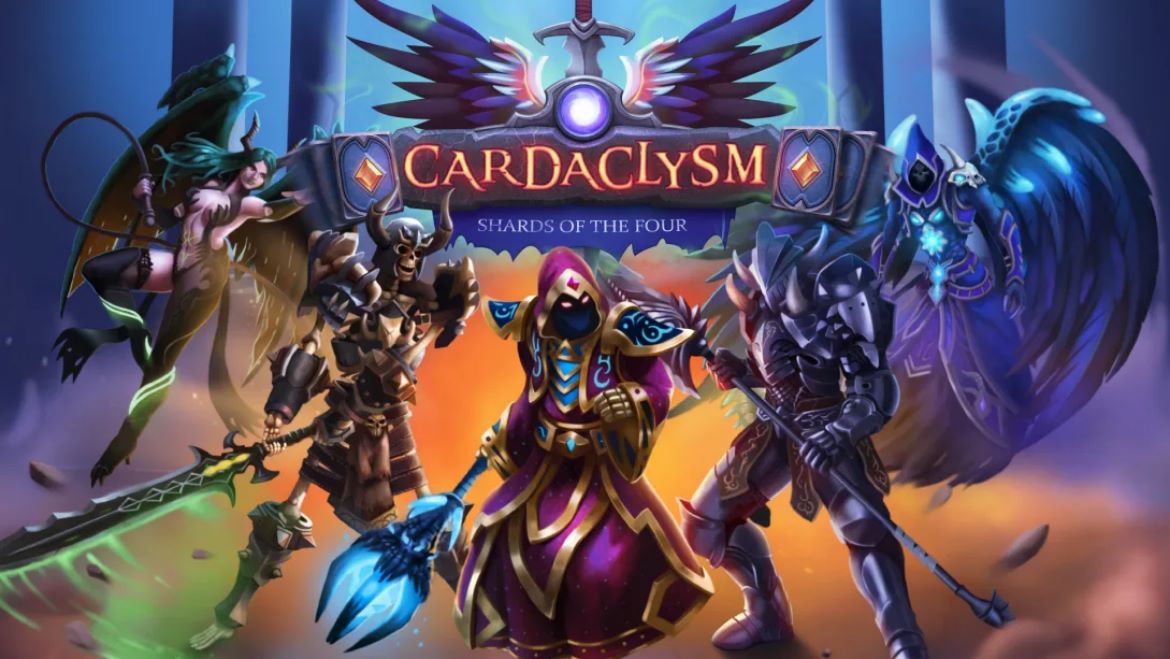 Cardaclysm: Shards of the Four Review

Disclaimer
This Cardaclysm: Shards of the Four review is based on a Nintendo Switch copy provided by Headup Games.