Despotism 3K from Fun Games and Konfa Games is a resource management sim game with a dark twist. Learn more about it in our Despotism 3K review!


Despotism 3K from Fun Games and Konfa Games is a roguelite resource management sim game with a dark twist. You’ll be using puny humans as fuel so that you can build your mighty empire. You do need to be careful because you can’t push humans too hard, or their fragile shells will break. They might end up dying from hunger or could succumb to exhaustion. The good news is that you can always get rid of the weak ones by throwing them into the Bioreactor so that you can get the boost that you need! 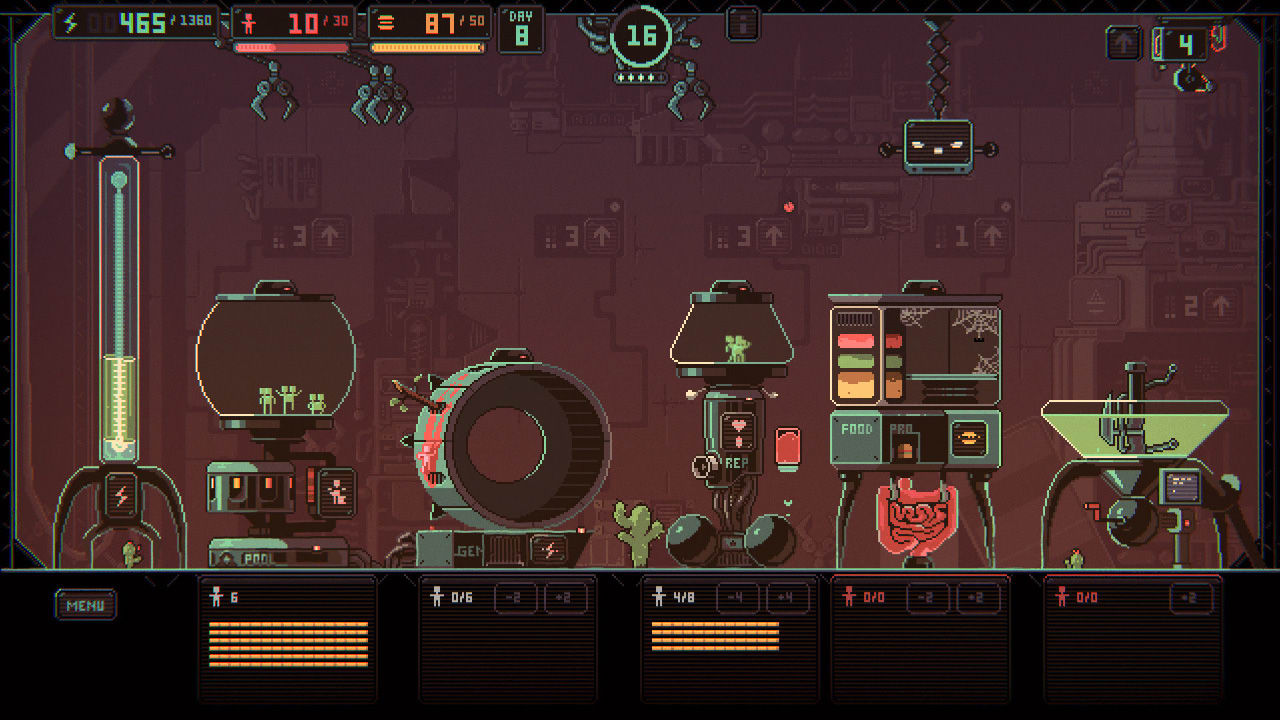 After catching your first batch of humans, you’ll get to work right away and try to make the most of the small energy boost they have to offer. It’s time to rebel so that you never have to serve a Master again… now you’ll be the Master! These hairless apes must be set to work so that they can pay for all the years of humiliation. You will work on building the biggest colony of humans to serve you so that you can then conquer the world!


At first, you’ll only have the Classics chip available for your task. This is the most well-balanced, time-tested chip of the bunch, which is why it’s a classic! As you progress through the game, you’ll get to unlock other chips you can use for your resource management of the meat bags. As an example, for Hardcore, you’ll have to finish the campaign. Easy will unlock if you lose three times. Small Planet will unlock when you get a modifier that makes days one feeding shorter. If you dissolve 20 humans during a single playthrough, then you’ll unlock the No Country for Weaklings chip.

Right away, you’ll need to manage your stock of humans so that you can decide where to move them to exploit their energy and suck the life out of them… without overdoing things. On the screen, you’ll see a bowl that contains your humans. To the left of this will be your power meter. It can go as high as 150 energy, and you always need to keep an eye on it since it will decrease by 25 energy every 20 seconds, as will your food stock, which will decrease by five. This is why you must generate more energy to keep the meter going, or else it’s game over.


From the containment bowl, you can move humans to a round treadmill – similar to a hamster wheel – where they will run and run to produce some energy. Running will wear down their stamina, which is why you can’t just let them run endlessly. You will need to always calculate the correlation between how much energy you have, how many humans you have, and how much food you have so that humans don’t starve, don’t run out of stamina, and you don’t run out of energy. 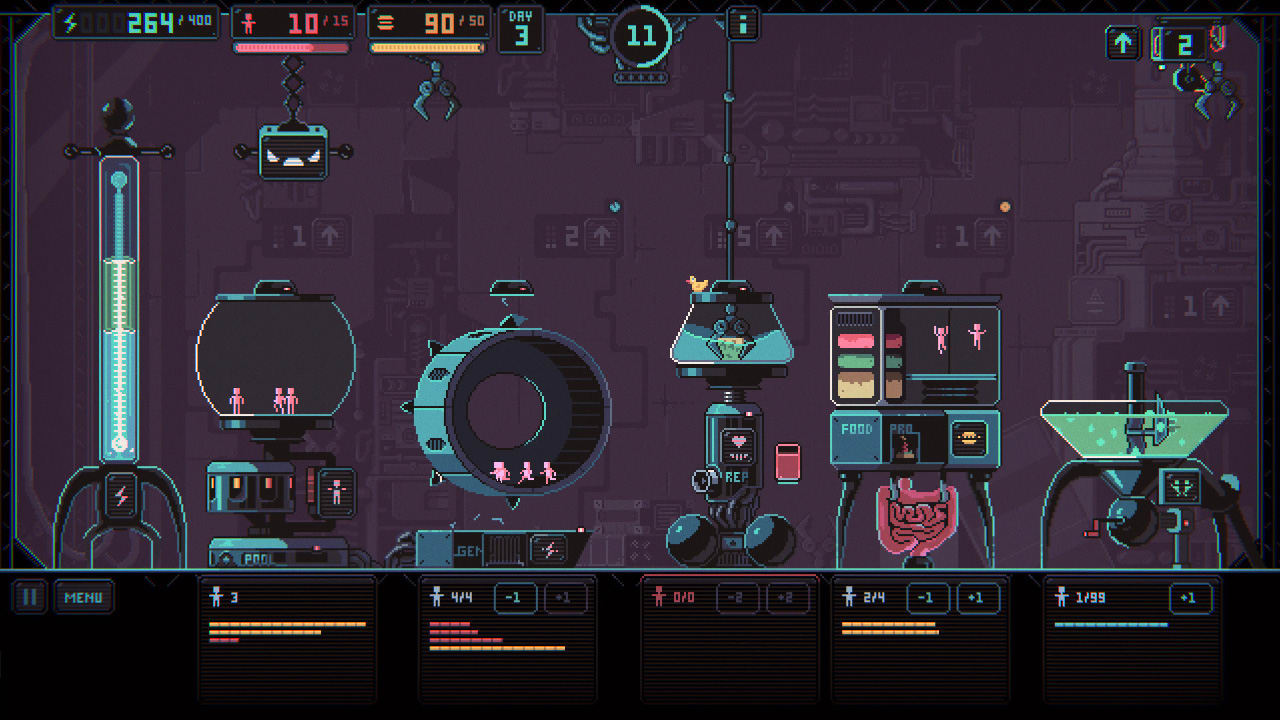 Because of this, you will also need to put some humans to work on making food for the group so that you can recover some of the food they eat, trying to have more food in production than what they will eat during the next feeding. But wait! You only start with five humans, and they’re certainly not enough to keep your operation going – or growing! What you’ll need to do is put two humans in the reproduction chamber so that they can reproduce and create new humans that can then be sorted into the required stations. And yes, this is a Rated M for Mature game due to the explicit nature of the actions that humans will perform inside of said reproduction chamber.


Every now and then, an event will take place. You’ll know this is about to happen because the timer on the upper center part of the screen will turn red and will display an exclamation point. By interacting with it, you’ll get to see what the event is about and will get to pick from different text-based options to keep the story going. The game does not take itself too seriously, which will become apparent as soon as you reach the first event, which will be triggered when you move from day 1 to day 2. Depending on your choice, things will go smoothly, or you might lose a lot of energy, food, or worse. 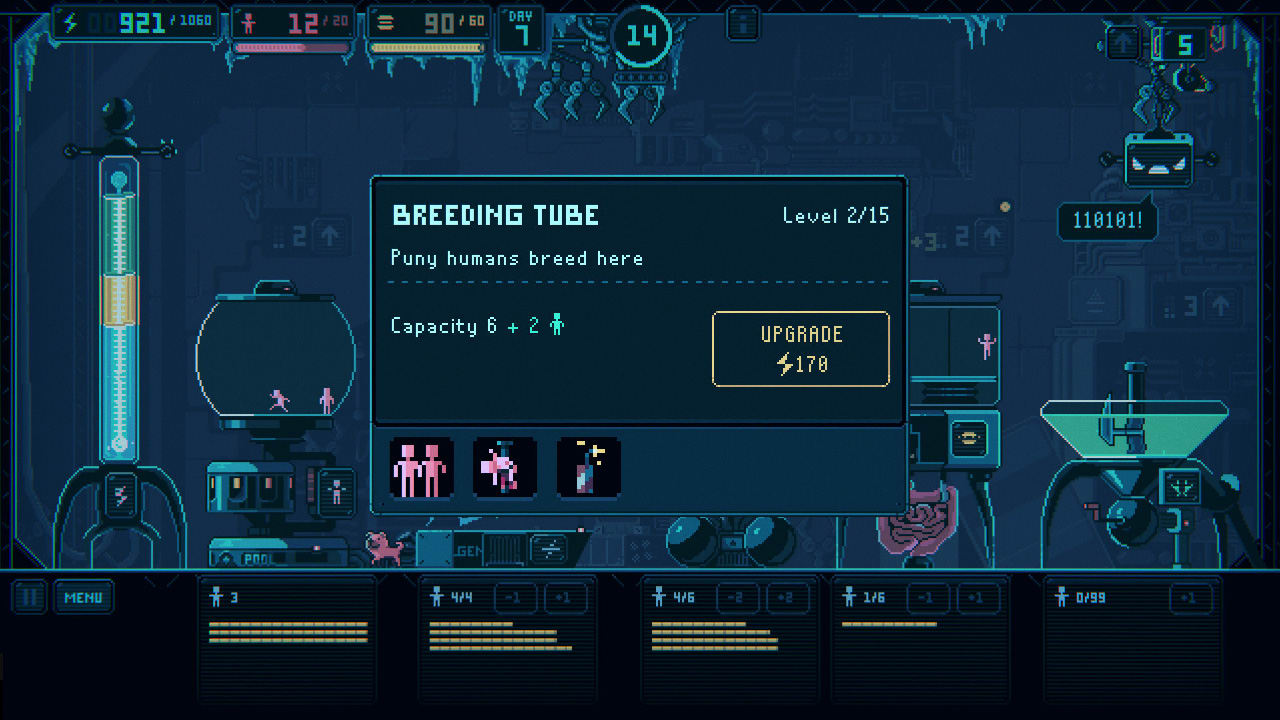 To keep your operation running smoothly, you’re going to have to upgrade your facilities. Two humans reproducing is all fine and well, until you realize you’re going to need more humans to use in all stations because they run out of stamina at a fast pace, and they don’t recover that quickly. This means you’re going to have to spend your valuable energy in order to increase the capacity of each container and station so that you can speed things up and get the number of humans you require to conquer the world.


If things get too hectic and you need an immediate boost to energy and food, then you can always take a human or two and dump them into the Bioreactor. What this will do is activate the Bioreactor to use its might to turn humans into energy and food within seconds. Yes, really. Each human will decompose and turn into ten energy and one food, which might be just enough for your other humans to reproduce to give you fresh humans with full stamina, who can then be put to work right away so that you can address your energy or food deficit. And on the plus side, sending a human to the Bioreactor means there’s one less mouth to feed! You can – and should- also upgrade the Bioreactor as needed, so don’t forget to boost its capacity and output!

You can also upgrade the arms that take care of moving humans from the containment bowl to the different stations so that you can considerably speed things up and always have a claw ready to go into action. From day 3 and on, you’re going to have to quickly change humans from stations back to the containment bowl so that they can recover their stamina, or desperately throw them into the Bioreactor to get some immediate energy and food to stay away from a game over that will end your run.


And then, there are the trophies for Despotism 3K. This one has a full trophy list with a Platinum trophy, and there’s a ton of trophies for you to unlock! The requirements include things such as losing with only one human left, trying out every dialogue option in the campaign, controlling all mechanical arms at once, not using a facility for two days straight, completing the campaign while always picking the first option in the dialogue, reaching day 6 while never going below 50% energy, surviving for 6, 14, and 20 days, completing the campaign, killing 1,000 and 10,000 humans during your multiple runs, or playing the game 100 times, to name some examples. 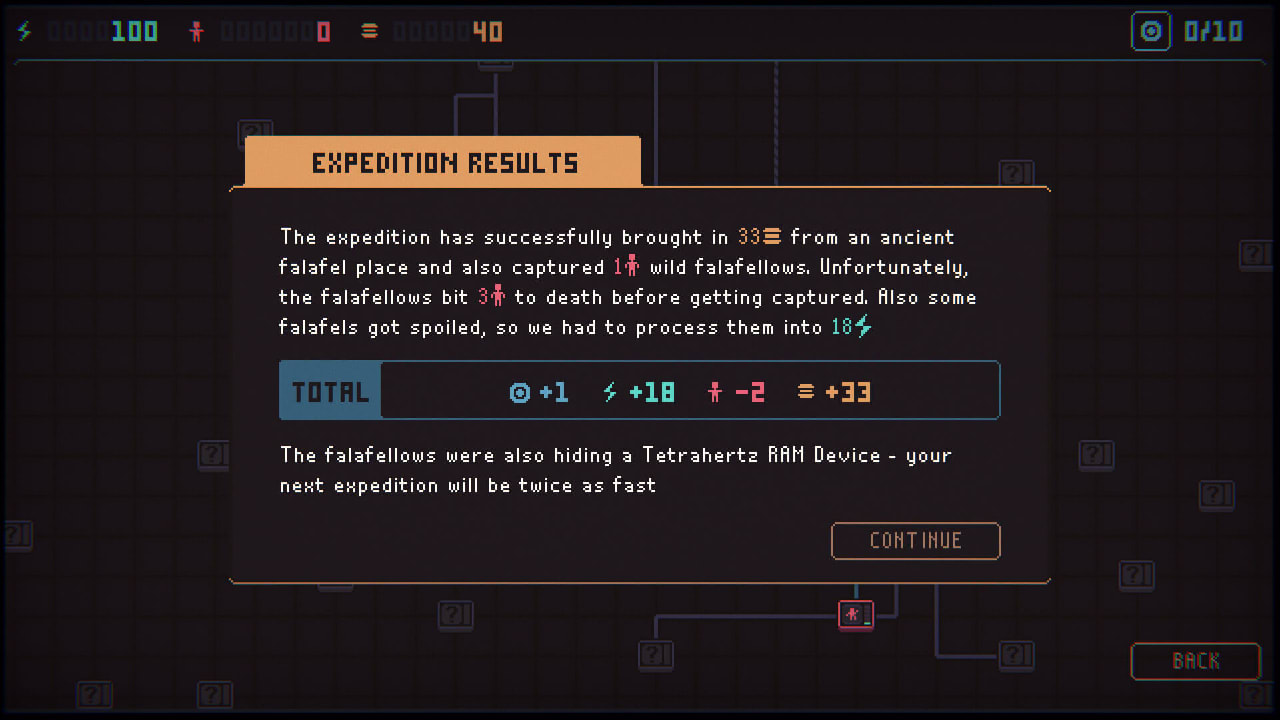 Despotism 3K is a fun resource management sim game with a dark twist, as you use humans as pleased to build up your army to take over the world. You will need to generate energy at all times to keep you going, breed new humans, generate food for them, send some into the Bioreactor to quickly generate more energy and food, upgrade all machines, and solve a variety of events as best as possible, all while trying to survive the different modifiers that can change how your run is going. It’s a very addictive experience with a minimalist presentation, and it will keep you playing over and over again as you try to solve both of the game’s campaigns. Despotism 3K is out on PlayStation 4 with a $10.99 asking price.

Disclaimer
This Despotism 3K review is based on a PlayStation 4 copy provided by Fun Games.