It’s time to enter the Breach one more time, but for this new adventure, things are not as they seem. Are you ready? Then check out our Axiom Verge 2 review!

Back in 2015, my game of the year was Axiom Verge. I adored the game, giving it a perfect score, which I still stand by, having played it a few times since it launched. Saying I’ve been waiting for a sequel with bated breath is an understatement. So how does the sequel fair compared to the original? Well, it’s certainly different. It’s not necessarily bad, but it’s a different type of experience. Axiom Verge 2 is a lot like its predecessor. It’s still a Metroidvania, and it features great pixel art and a solid soundtrack. The story and world-building are there. The first major change is that the sequel’s story features a different character. Indra Chaudhari isn’t Trace from the first game, and that’s very evident. Where Trace is just thrown into the universe of Axiom Verge and has to survive, Indra comes to the world in search of her missing daughter. Axiom Verge 2 focuses almost completely on close-quarter melee combat, wherein in the original, you were given an array of different weapons that allowed you to fight from a distance.


This changes the feel of the game, but that doesn’t mean I didn’t like what Axiom Verge 2 has to offer. I think it does some things like hacking better than the original, but I did miss having the options and choices of weapons available for the sequel. Combat does initially have a bit of a learning curve since there’s a need to readjust to short-range combat while making the most of your hacking abilities. But once you get a feel for things, everything clicks into place, and you get that solid Metroidvania feel that the original did a great job at presenting. 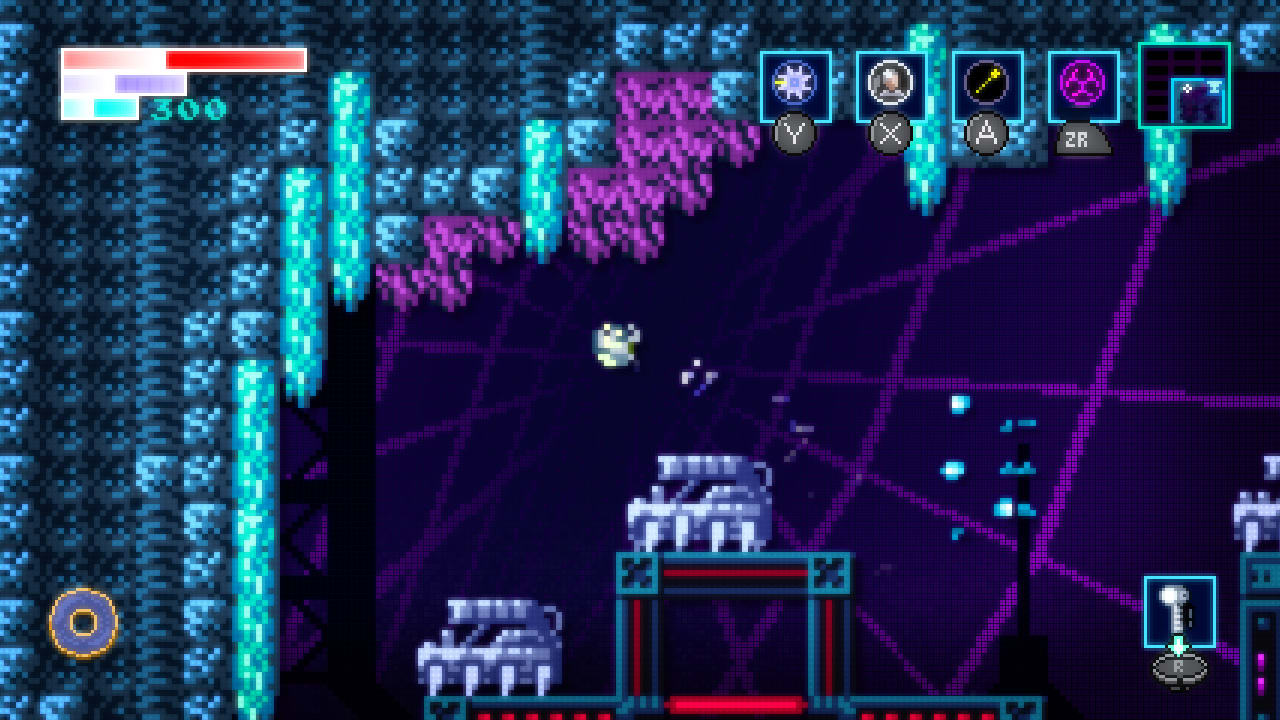 With Indra, most of the combat will have her focusing on learning each enemy’s attack and movement pattern so that you can know what the best way is to attack them to survive. There really isn’t a dodge ability, so you need to make every hit count while avoiding their attacks. Now let’s discuss the hacking. The original game featured a glitch gun that would have different effects. Axiom Verge 2 takes it to the next level since you can hack enemies near you and pick an effect. This includes things such as opening or closing doors, making an enemy slower, making some spit out a health power-up, or making an enemy go boom. You’ll have to spend some of your energy to activate these hacks, so you’ll have to decide what’s best for each fight. I enjoyed the expanded scope that hacking brought to the combat. I suggest that you spend some of the flask points that you’ll collect to expand your hacking range.

Yes, there are some lite RPG mechanics built-in, along with the standard upgrades you would expect from a game that pays homage to the beloved Metroid series. As mentioned, you will collect flask points which you can use to boost your infection level so that you can target more powerful enemies and contraptions, increase your hacking range, or boost the strength of your attacks. Thanks to this, you can customize your gaming experience as needed. 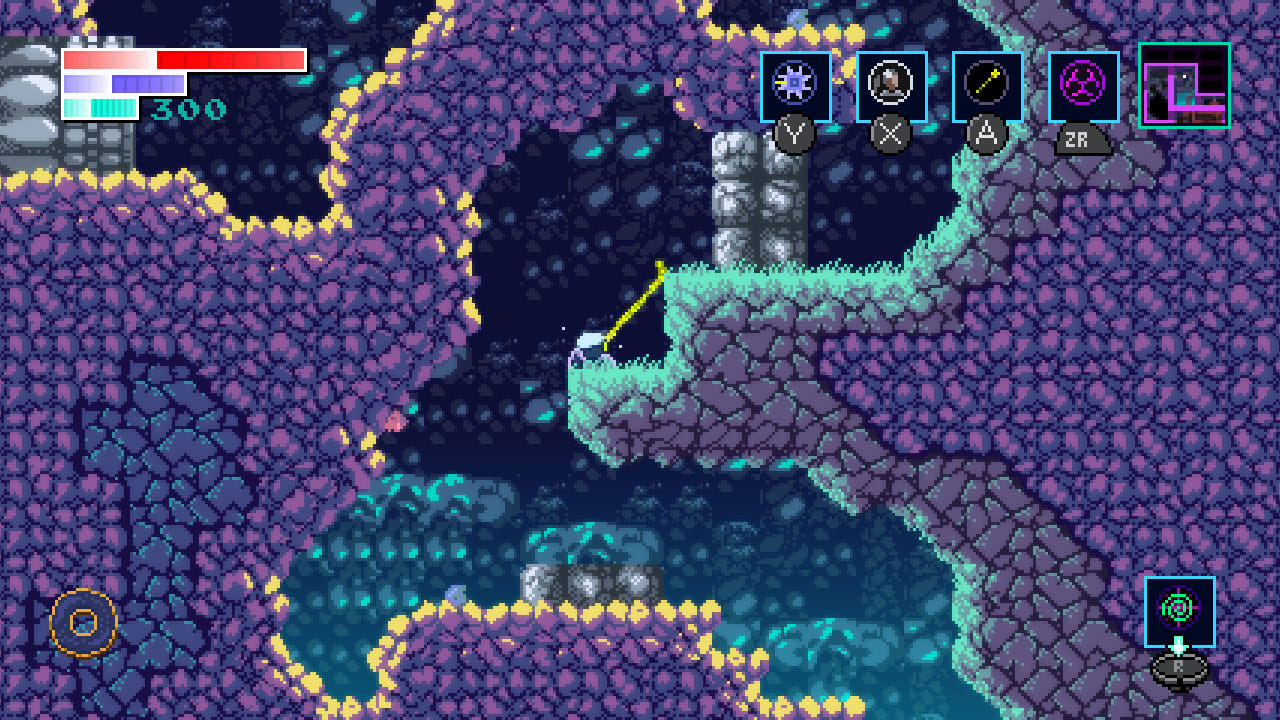 As for the world itself, it’s a great one to experience! Indra is exploring the Antarctic – or at least another dimension of it. While, sure, there are snowy areas with lots of frost, other areas are bright, colorful, and alive, which is something that the original game did not do. Also, there are other people to talk to, which helps you to connect with this world. What I thought was really cool, though, was the Breach. The Breach is another dimension that, in some ways, mirrors the real world. You can send your drone into the Breach to explore the parts that you can’t, and you can use this time to unlock new save points in the Breach, collect upgrades, and open paths by destroying weird purple organisms that block your way in both dimensions. The save points part will be very important since you can collect an upgrade to fast travel to any save point while in the real world or to any save point while inside of the Breach.


The story of Trace probably wasn’t the most riveting thing moving you forward while playing the original since most of the lore and story were told in notes lying around the world. With Indra, though, you are constantly searching for your daughter, talking to people, and you feel like you are on a journey with a purpose. Trace had to escape from the world that Axiom Verge had to offer. There still is a ton of lore notes to find if you want to expand on the world of Axiom Verge 2, and there are tangible connections between the two games. Take your time and read every note you find!

I did want to jump into the accessibility options as well, Axiom Verge 2 is filled with options so that all players can play this game and experience it. You can change how Enemy damage deals, player damage, game speed, and visual adjustments. Even the bosses are skippable, so you can just run right past them! These types of options should be applauded, and I’m glad to see them in there. I talked about my love of the original game early on since it’s one of the best games I’ve ever played. The sequel is different, but it’s still a stellar title that is certainly worth playing on Nintendo Switch. Once you adjust to the switch from long-range combat to melee battles, things will click. As long as you know what you’re getting yourself into and enjoy the sequel for what it presents and how the Breach segments elevate the whole experience, then you’re going to have a great time. There are also some great accessibility options to tailor your gaming experience so that gamers of all skill levels can enjoy what this sequel has to offer. Axiom Verge 2 is out on Nintendo Switch with a $19.99 asking price, and it’s a must-buy for Metroidvania fans.

Disclaimer
This Axiom Verge 2 review is based on a Nintendo Switch copy provided by Thomas Happ Games.