Blightbound from Devolver Digital and Ronimo Games is a local and online multiplayer dungeon crawler on PlayStation 4. Learn more in our Blightbound review!


In Blightbound from Devolver Digital and Ronimo Games, you’ll be taking on a local and online multiplayer dungeon crawler on PlayStation 4. Devolver Digital has been on a roll, giving us a wide variety of games on PlayStation 4 and Nintendo Switch. Ronimo Games you know from excellent releases such as Swords and Soldiers II Shawarmageddon or the aptly titled Awesomenauts. This time around, we’re getting a great-looking hand-drawn dungeon crawler cooperative action RPG that has you venturing into the Blight.

Many decades ago, a group of legendary warriors managed to slay the dreadful Shadow Titan. When the creature fell, everyone was ready to celebrate… until they realized that a greater issue was now at hand. From the Titan’s husk, the Blight started to flow, a fog that corrupted all living creatures that became exposed to it. The Blight has spilled everywhere, forcing everyone to find refuge in the mountain tops. Heroes travel from the mountains to explore within the Blight, fighting against all of the evil creatures and the horrors that now rule the land. This is an extremely dangerous activity, but a needed one since the Blight hides more human survivors that must be rescued, as well as lost artifacts that could prove to be extremely useful during your journey. 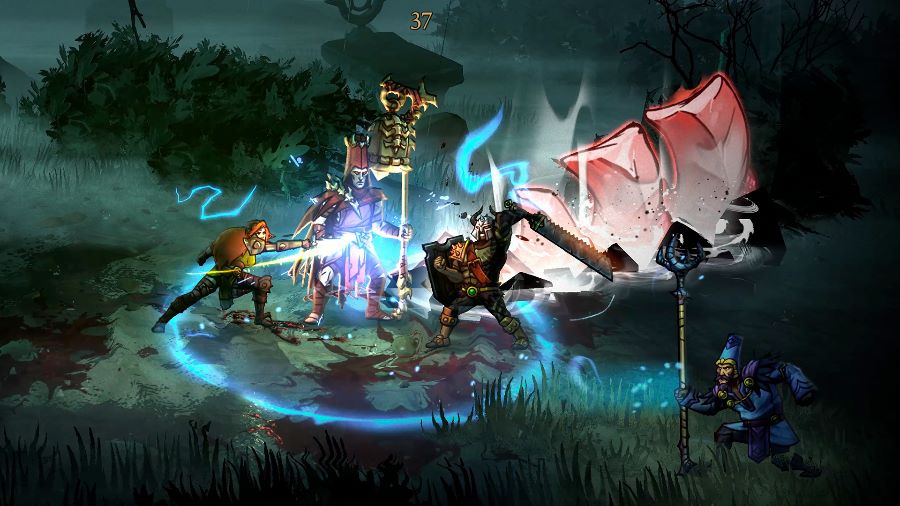 Before you dive into the game proper, I kindly suggest that you take the tutorial for a spin in order to learn all of the basics so that you can stand a chance during your first run. You will need to rescue two warriors, as you are taught all of the things you can do with the DualShock 4 controller. You’ll move your character with the left analog stick, using a dodge skill with the X button. This will have a cooldown, so be aware of how you won’t be able to just roll around all over the place to dodge damage.


The Square button will be for your regular attacks, while the Circle button will activate your class ability, based on if you’re playing as an Assassin, a Warrior, or a Mage. The Triangle and R1 buttons will have a special Titan Skill mapped to them, based on your current progress and what you’ve managed to unlock so far. Once you’ve managed to save up enough energy by using your class ability, you will be able to unleash an Ultimate attack with the R2 button, which you should save for very special occasions.

Each of the three characters classes will have different abilities to consider. While the Assassin is nimble and can backstab enemies after dodge rolling behind them, unleashing powerful blades with one of the Titan Skills that will make short work of smaller enemies, the Mage works best when attacking from a safe distance, teleporting in to collect mana that can then be used to heal himself and other party members within a certain range. The Warrior excels at close-range combat and can use his shield to protect others and block damage, as it unleashes a taunting roar to draw all attention, canceling an enemy’s ability cast in the process. You’ll need to find the right class to play as so that you can complement the other members of your group by knowing what your role is and how to maximize its potential. 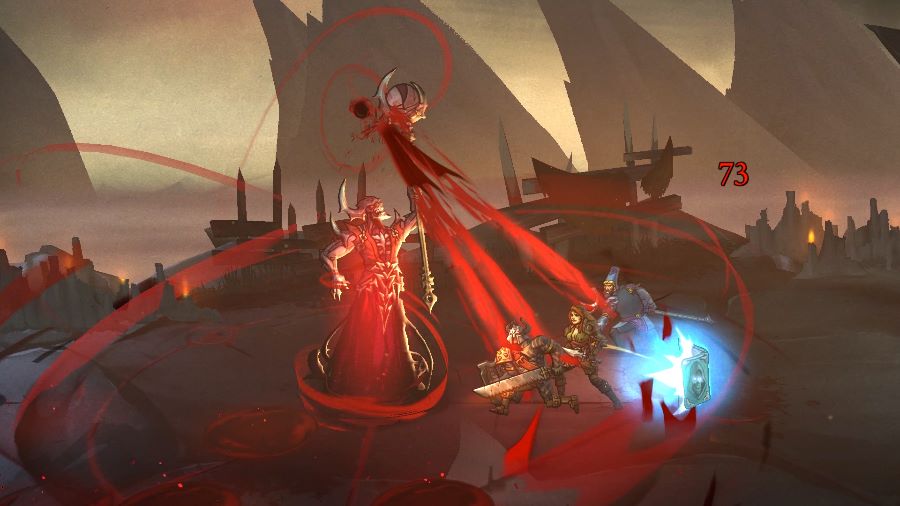 There are several characters to play as, but each one of them will fall within one of the aforementioned class archetypes. For example, the Assassins include Triss, sister to Warrior Creen, both a pair of wastelanders who will do whatever it takes to survive; young scion Bu, of the Motonoga Clan, a group that has its hands in many operations such as human trafficking and the sale of stolen goods; and Desert Mouse Of the Sand, a skillful and stealthy individual who can quickly destroy those who judge her by her size. These are only some of the Assassins, and when you add the Mages and Warriors, there’s certainly going to be a character that will strike your fancy. More and more characters will be added to your band as you progress through the game.


As you take on each stage, you’ll have a specific goal to complete – such as, for example, rescuing any survivors you find the area – as well as additional personal goals for each character. Say you’re playing as Assassin Scarlet. She will be looking for Bloodslick to combine it with Rainslick. These are a pair of daggers, of which she currently holds one in her possession. Should you complete a hero’s personal goal, good things will certainly happen.

When you complete a dungeon with a hero, it will gain stat points. These stat points can be distributed to improve a character’s power, agility, vitality, will, and luck, which will allow you to start to favor the stats that best suit your playing style. Power will increase how much damage you deal per hit, agility will increase your movement speed while also boosting critical damage, vitality will increase a hero’s maximum health, while also increasing the effectiveness of healing, will reduce the cooldown of Titan Skills, while luck increases critical change percentage, along with improving the level of the items you find. 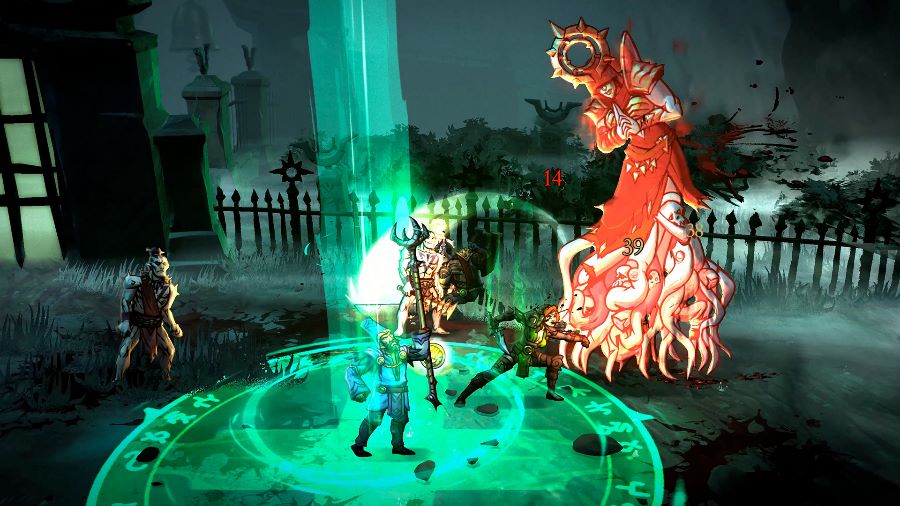 Speaking of which, while you explore each dungeon, you’ll gain gold and will sometimes find weapons, items, and other pieces of equipment that you can put to good use by adding them to your heroes. You could find a trinket that increases a hero’s health by 200 points, a more powerful weapon that can increase your damage output, a ring that can boost a hero’s critical hit chance percentage, or perhaps a trinket that will slow down enemies for a bit whenever you land a solid hit.


By increasing the refuge’s prosperity level, you can unlock more benefits for the refuge and its heroes. You can do this by finding more heroes, obtaining better equipment, boosting your stats, recruiting artisans, and rescuing survivors from each o the dungeons you visit. Each of these will have a points value, and once you’ve managed to secure enough, the refuge will level up. This can reward you with extra stat points for all heroes, obtaining a Bestiary from which you can review all of the enemies you’ve battled, unlocking new recipes for the Blacksmith to forge new powerful items and more.

As for the trophies, Blightbound has a full trophy list with a Platinum waiting at the end of your adventure. It’s not going to be an easy one to complete since, other than the trophy you get for completing the tutorial, the rest will require that you complete several dungeons while playing as Malborys, unleashing your Ultimate over ten times during a single run when playing as Creen, collecting 500 mana orbs while playing as Ezzouhn, or dealing damage with damage over time effects a total of 5,000 times while playing as Bu, to name some examples. Since not all heroes will be unlocked right from the start, you’ll first need to find them and take them to the refuge so that you can work on character-specific trophies. 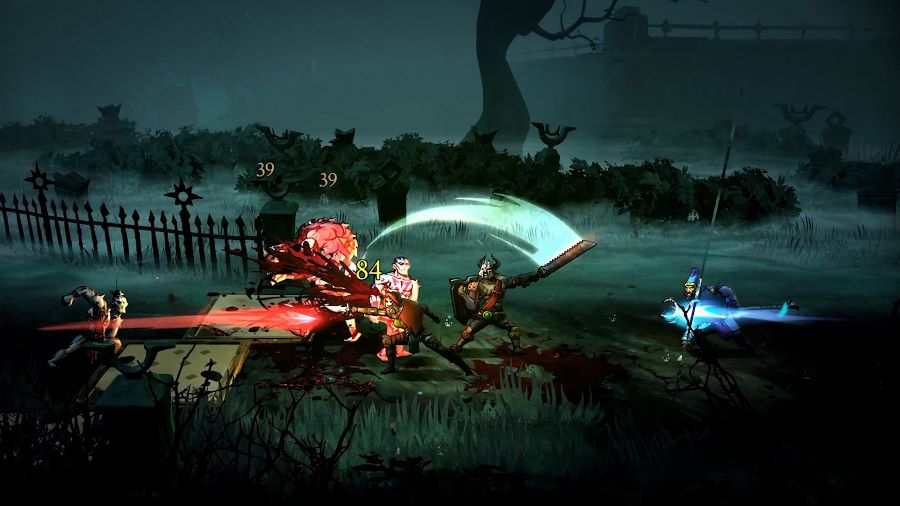 Blightbound is a fun action RPG that you can enjoy either locally with friends or online with players from around the world. Worst-case scenario, you can play on your own alongside bots as you select your favorite hero and take on the dangers that crawl in the Blight. There are plenty of heroes to unlock, lots of stages to play, plenty of loot to find, and a good challenge to face as you improve your stats and make the most of your Titan Skills and your special Class Skill to go up against the deadly bosses that can destroy you in a blink if you’re not careful. 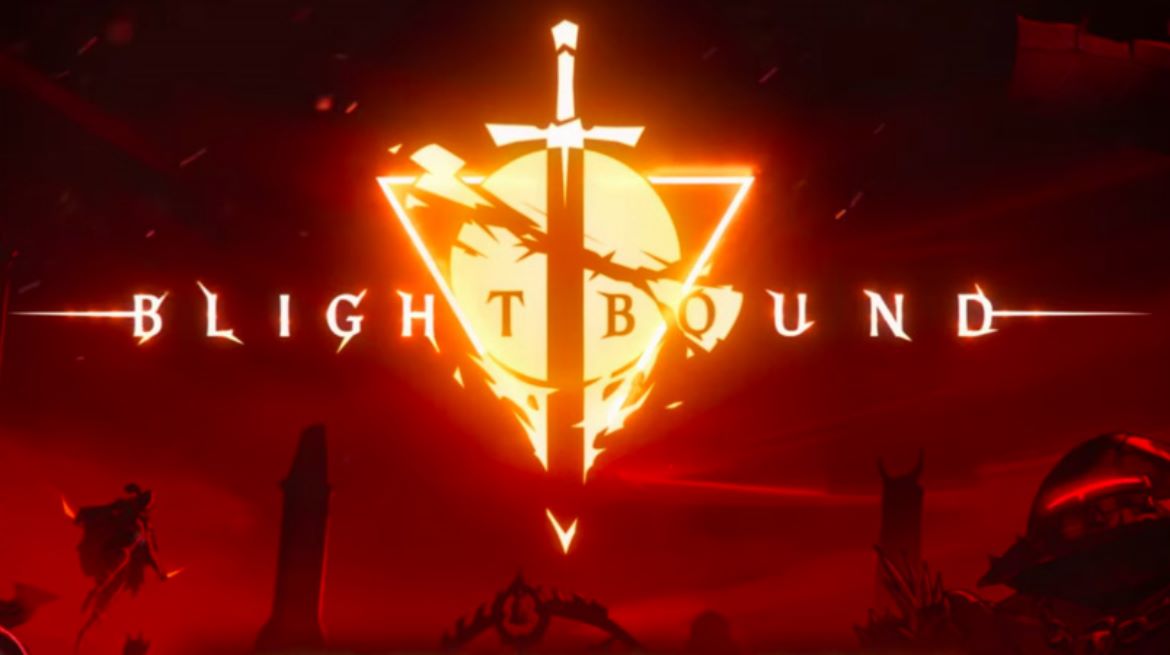 A fun and challenging local and online action RPG

Disclaimer
This Bligthbound review is based on a PlayStation 4 copy provided by Devolver Digital.