[Nintendo Switch] The Dungeon of Naheulbeuk: The Amulet of Chaos – Chicken Edition Review


The Dungeon of Naheulbeuk: The Amulet of Chaos – Chicken Edition from Artefacts Studio and publisher Dear Villagers is a turn-based fantasy tactical RPG on Nintendo Switch. It’s a parody take on the fantasy genre, starting as an online audio series in French from creator John Lang. After its success, the universe of The Dungeon of Naheulbeuk was expanded into comic books and graphic novels, novels, books of the “you make choices and decide how your adventure unfolds” variety, a tabletop RPG version, and now a video game. 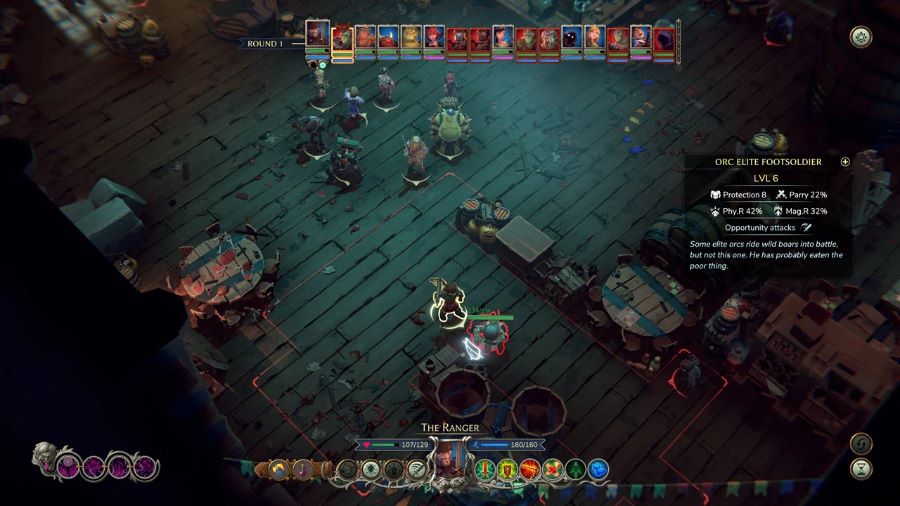 As the long name for this particular release suggests, this is not the standard edition for The Dungeon of Naheulbeuk: The Amulet of Chaos. What the Chicken Edition brings to the table is both the original full game as well as its first DLC, Ruins of Limis, at no extra cost. This DLC features two factions, which means you can play as the Necromancers or the Vampires and see each side of the story, with many quests to complete, sidequests to take on, as well as new boss fights. You can access this DLC right from the main menu, so you can jump right into it if you’re feeling adventurous.

You can choose between four difficulty settings for your time with The Dungeon of Naheulbeuk: The Amulet of Chaos. There’s Gripping Tale, in which the story is prioritized over the challenge, making it the perfect option for those new to the turn-based tactical RPG genre. Your heroes will have more health, deal more damage to enemies, and have greater accuracy, while also having more gold, potions, and bandages at the start of their journey. Enemies will also have less health and might miss with their attacks.


Tavern Song bumps things up a bit, making it the standard experience with a balanced challenge without overwhelming players. Then we have Epic Gest, for which, as the name suggests, danger is around every corner. Enemies will have more health, will deal more damage, and have greater accuracy. Your heroes will start their quest with fewer resources, and some battles will have additional enemies. And the last one is Gzor’s Nightmare, which is only recommended with a lot of experience since any mistake can cost you the battle. Enemies will have a ton of extra health, will pack a punch, the enemies you face in combat will multiply, and you’ll have less of a chance to survive if you don’t make the right call. Add the Iron man option, and if your party dies, it’s game over, and your save will be wiped, so you’ll have to start over! 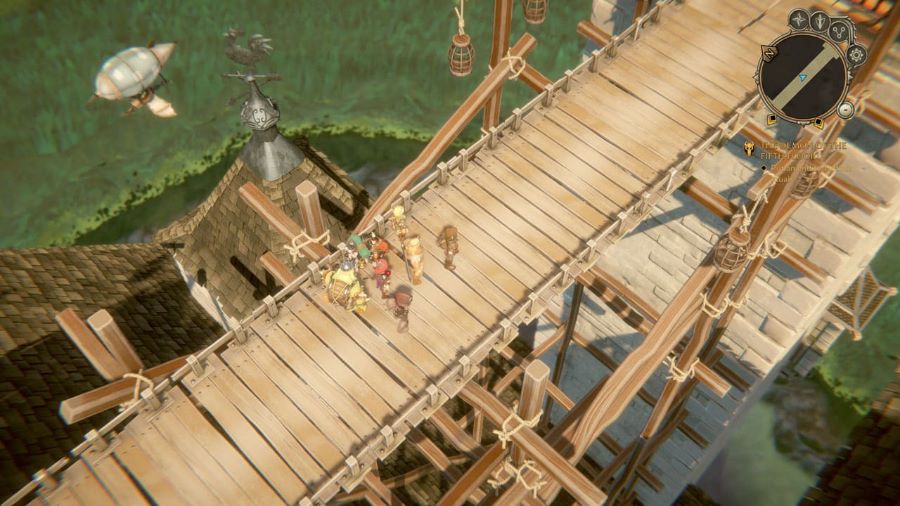 There are also other options to customize your experience. You can pick between having a male or a female narrator for the story, retaining the random seed generated at the start of the game, which will allow you to learn from your mistakes and fix any missteps along the way by reloading a save and making different tactical choices. There’s also the option of having the game automatically distribute the attribute points your characters gain when leveling up. You can also have the game automatically replace any consumables that have run out – that is, as long as you have them in stock. Turns can end automatically once you run out of actions, the grid can be shown or hidden during battle, and you can configure the camera’s rotation speed, as well as when it will come closer for a tighter shot.

Your group will be comprised of a Ranger, a Wizardess, a Barbarian, an Ogre, an Elf, a Thief, and a Dwarf. Each character will have different abilities and skills to consider, as well as a series of pros and cons to keep in mind. The Ogre is the largest and most powerful member of your group, which is why he’s the one who carries all of the stuff that you find along the way. Do be aware that everything has a weight, and there’s a limit to how much he can carry. The Ranger is the most balanced of the bunch, offering good stats for attack and defense. The Elf can attack from a safe distance with her bow and arrow. The Thief is good at deactivating traps and sneaking up with enemies if needed – although he’d rather avoid combat at all cost. The Wizardess – along with translating what the Ogre has to say – can use magic on unsuspecting enemies. The Barbarian is all brawn (and no brains), so he’ll be your best fighter. As for the Dwarf, he’s definitely grumpy, a heavy drinker, and someone who acts before thinking, which can usually get the group in trouble.


The game will be split into two phases: exploration and combat. During the exploration segments, you can move the leader around with the left analog stick, cycling between leaders with the ZL and ZR buttons. You can check your inventory, open your quest journal and map, open the skill tree, and highlight interactable objects with the D-Pad. To rotate the camera, you can use the right analog stick and can confirm your actions with the A button. In combat, the left analog stick will be used to move the cursor on the screen to set a waypoint and command your units. The D-Pad will be used for highlighting characters, showing overwatch areas, and opening the advanced tooltips. You can cycle between targets with the L and R buttons, confirming your actions with the A button. 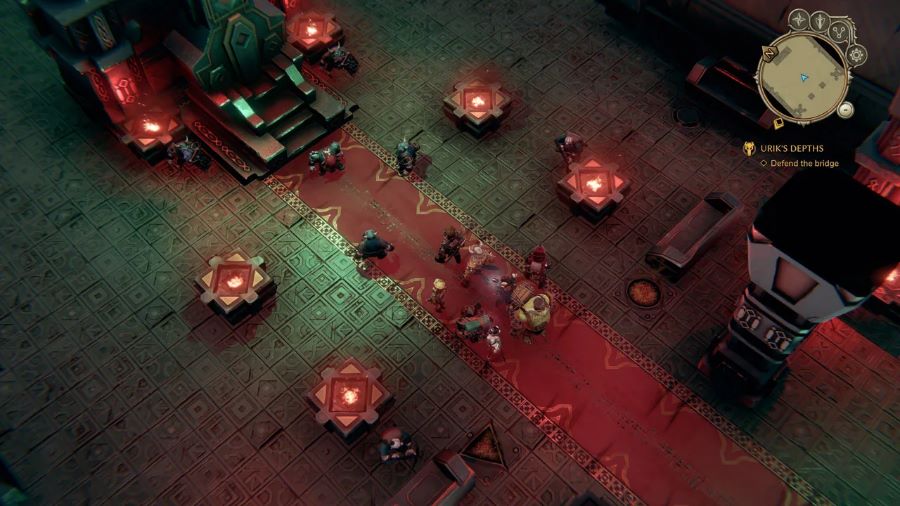 When in combat, each of your characters will have two action points. This means that each of your party members can move as well as perform an action for each of their turns. If you want any of them to move further than their normal movement range, you can decide to spend both action points for this. If you want to attack before moving or move before attacking, just press the R button to switch between movement and attack. When moving, don’t forget to pay attention to your surroundings, as well as the positioning of your enemies. Backstabbing an enemy will deal more damage and increase your accuracy, but your opponents can also take advantage of this.

You can check this, as well as any additional effects that might come into play during an attack, on the boxes on the right side of the screen. For example, your base accuracy might be of 70%, but positioning your character in order to be able to backstab an enemy can make it possible to increase this by a bit. You can also review your opponents’ level, protection, dodge percentage, physical and magical resistance, and if it has any current status effects that increase or decrease its base stats. There are three weakness thresholds, and you can see these right away depending on if an enemy’s icon is yellow, orange, or red. 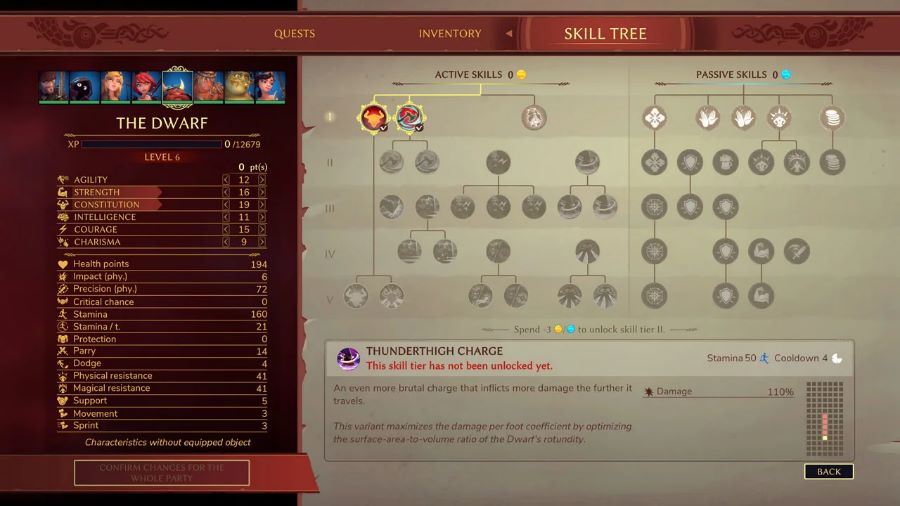 After the combat phase ends, all characters in your group will gain some experience points. Everyone receives a base amount of experience points, as well as some extra experience points based on their actions during battle. If one of your party members ends up unconscious – that is, if it runs out of health – then it will receive a smaller experience gain. Once a character gains enough experience points, it will be able to gain attribute points, which can then be allocated at the skill tree to gain new boosts and abilities. There will be active and passive skills to consider. Passive skills will grant a character a bonus, either permanently or when under certain circumstances. Active skills must be used in combat and can be selected from the action bar at the bottom of the screen.

Disclaimer
This The Dungeon of Naheulbeuk: The Amulet of Chaos – Chicken Edition review is based on a Nintendo Switch copy provided by Dear Villagers.

Unbound: Worlds Apart Out Next Week