Cris Tales from Dreams Uncorporated, SYCK, and Modus Games is an outstanding time-bending JRPG that shines on Nintendo Switch. Learn more about it in our Cris Tales review!


In Cris Tales from Dreams Uncorporated, SYCK and Modus Games is an outstanding era-bending JRPG that truly shines on Nintendo Switch. It features a very interesting gameplay hook that allows you to travel through each area in the past, the present, and the future… at the same time! It’s a game that has been inspired by genre classics such as Final Fantasy VI, Valkyrie Profile, Super Mario RPG, and Chrono Trigger, and these influences definitely show while still allowing Cris Tales to do its own thing to stand out as an experience you’ll certainly remember.

Your journey will take you on an adventure as Cris Bell, the new Time Mage and main character for this story, is called into action when the Time Empress decides to threaten the fabric of time, aiming to bring a cataclysm that will tear apart Crystrallis and its four kingdoms. To change the future, you will need to take on a quest through the past and the present to bring forth the changes needed to affect the future as you meet powerful allies that will share your goal. As expected, manipulating time will not only affect the areas you explore but also how each battle develops – more on this in a bit.

The game starts right away with a battle, teaching you the basics of combat by way of Matias, your frog companion. You’ll have to select to attack or use one of your unlocked abilities. For example, when you attack with Crisbell, pressing the A button at the right time will allow you to unleash a double slash, which will boost the damage dealt. This also applies to lowering the damage dealt by your opponents, so pressing the A button at the precise moment will allow you to deflect and parry the attack, lowering the damage your character will receive. This active element on top of the turn-based battle system helps to keep you engaged.


Your first party member during the tutorial will be Christopher, who hails from the kingdom of St. Clarity. Christopher will join you in battle against the invading goblins so that Crisbell has a chance to survive since from this fight and on, you’ll have to deal with enemies on both sides of the screen. Christopher will attack with a sharp shield that deals good damage, and he will also start with a Water Bubble skill that can deal water damage to a single target, but this will use up some of his magic points (MP).

Once you go out on the adventure proper, you’ll meet Willheim, who is also a Time Mage. Upon meeting him, Crisbell mentions that he’s a child, but it turns out that Willheim is actually using his time powers to keep himself looking like a young child. Once you’ve gained access to the time hop feature, you’ll be able to use this both during the exploration segments as well as during battles. While exploring, you can take a look at the past on the left, the future on the right, and your present in the middle, seeing how things change with every move you make. 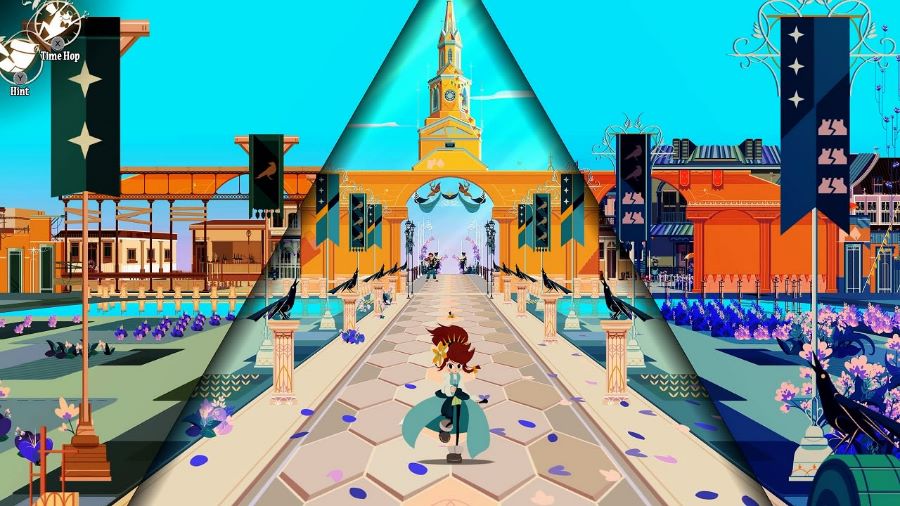 While in battle, you could mix things around by switching around between the past, the present, and the future, directly affecting your opponents. What would happen if, for example, you deal poison to an enemy and then send it into the future? Or perhaps you’d like to send an opponent to the past so that you can fight against a younger, weaker version of itself? There are limits to the system so that you don’t end up abusing it, but it’s a fun system! You will need to spend Crystal Points (CP) when switching enemies around to the past or the future, so as long as you balance your regular attacks, your skills and send enemies to the past or the future at the right time, you’ll maximize your damage output while giving your party better odds to survive. This does remind the that the game does not autosave, so be sure to save whenever you’re in the overworld or when the game kindly warns you that you’re about to go up against a powerful enemy and grants you the opportunity to save.


During the exploration segments of Cris Tales, you’ll move around with the left analog stick or the D-Pad, interacting with objects and characters with the A button. If you’re ever in need of a hint, you can get one by pressing the Y button to point you in the right direction. Since you’ll be playing with time during these exploration segments, you’ll be able to change the potential outcome of a variety of situations. Without spoiling things too much, allow me to talk about an example that Willheim presents early in the game.

He will provide you with a seed, which you can plant on the nearby patch of dirt to your left. After doing this, you will get to see what Crisbell sees in the future: a tree that has grown from the seed you planted. This is a potential outcome for your action, but Willheim makes it very clear that, in order for this future to happen, you’ll have to take care of and nurture the tree in the present, or else it won’t grow in the future, and it will not bear fruit. 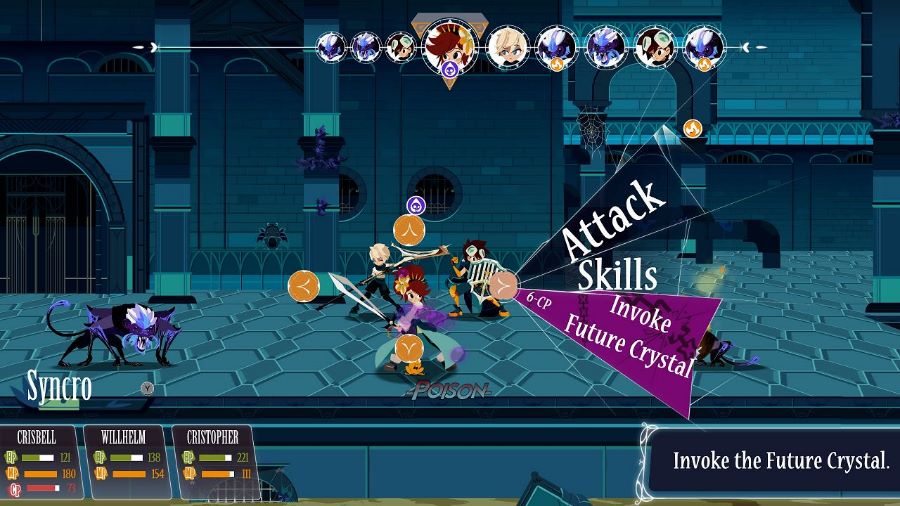 As is the case for the RPGs that have inspired the teams behind Cris Tales, you’ll have to juggle a growing cast of party members. You’ll need to do some trial and error – especially during boss fights – to find the right combination to get the job right. You might also need to grind a bit to level up your party members so that they gain access to new skills that can be of great help when battling this or that boss, so do be aware of how grinding is very much also part of this JRPG – just like it happens for the classics that inspired it!


Defeat enemies and bosses, and you will gain experience points and coins. Once a character has gained enough experience points, it will level up, obtaining a boost to its stats (HP, MP, attack, defense, etc.) while, as mentioned above, also gaining access to new skills and abilities. Coins can be used to upgrade your weapons, and you can also purchase other equipment to boost your stats and gain extra protection. Be sure to check any equipment you collect along the way so that you can always be prepared for the worst-case scenario.

Actions have consequences, and this also applies to Cris Tales. The way you decide to solve some of the situations you run into – or if you ignore them! – will dictate what the future has in store for each of the kingdoms in Crystallis. This offers lots of replay value since you could have a very different outcome for a kingdom based on the choices you make along the way. This is not a short experience since it’s going to take you 30-40 hours to roll credits on Cris Tales depending on how deep you go here and there, which means you’re getting a lot of bang for your buck. 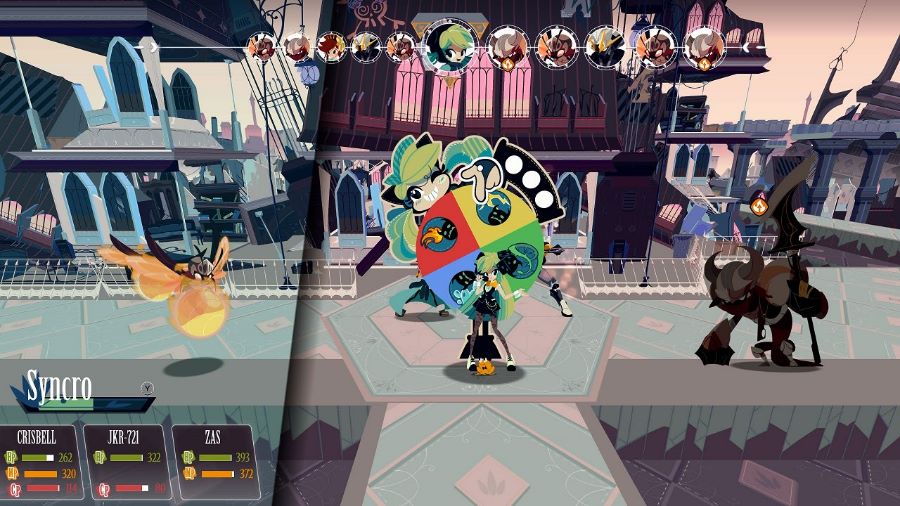 Cris Tales is an outstanding time-bending JRPG with fun gameplay mechanics, an engaging story, and lots of objectives to complete. The game is fully voice acted, and this includes not only the main characters that will be part of your party but also many of the other characters you’ll interact with, as well as the bosses that you’ll meet along the way. The art style for Cris Tales is something that helps the game stand out since it makes for a very colorful, charming, and detailed presentation. The one complaint I have is that on Nintendo Switch, the game loads for five seconds before entering a battle and for another five seconds after you’re victorious. Cris Tales is out on Nintendo’s console with a $39.99, which makes it an easy one to recommend for JRPG fans. 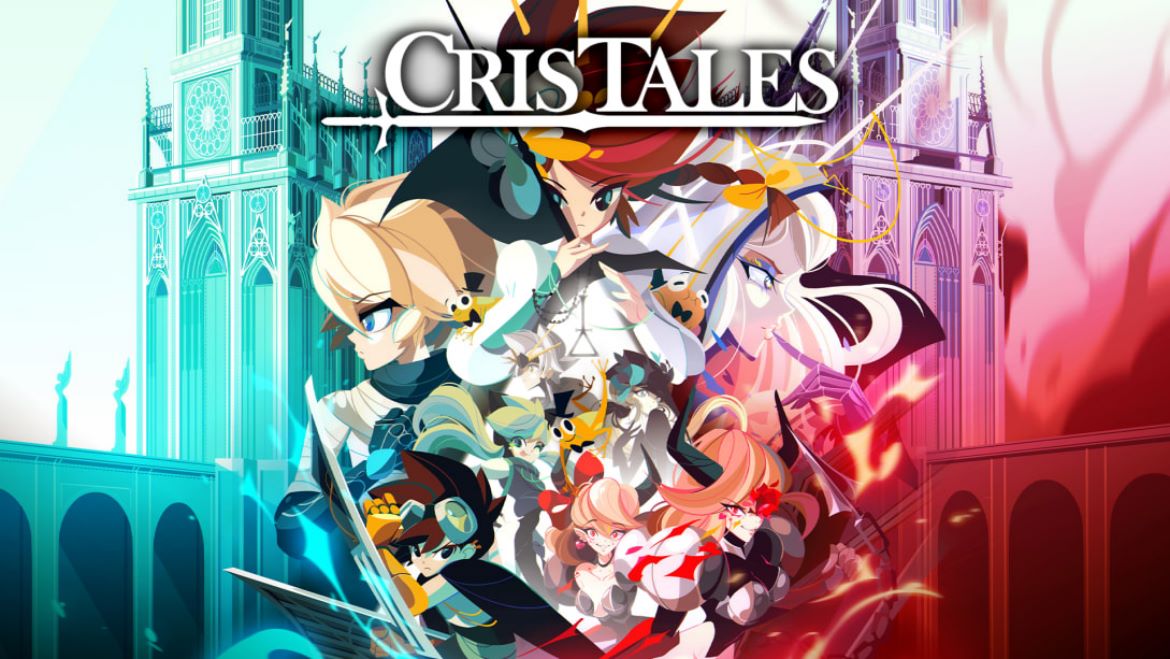 An outstanding time-travelling JRPG that pays homage to the classics

Disclaimer
This Cris Tales review is based on a Nintendo Switch copy provided by Modus Games.