In Warhammer Age of Sigmar: Storm Ground from Focus Home Interactive and Gasket Games you’ll be taking on a turn-based game set in the beloved Warhammer Age of Sigmar universe. You’ll be taking on a non-linear Campaign Mode with a roguelike twist, which means that death is very much going to be part of the equation since you’re going to fall at some point during your run. You’ll need to pay attention to your opponents and their abilities at all times, or else you’ll find yourself falling in battle rather fast. Some units will have an area of effect attacks, others will need to charge up their ability for a turn before unleashing a world of pain, and others will pack a punch but won’t have a lot of hit points, so you’ll need to be careful about how you move around the battlefield. 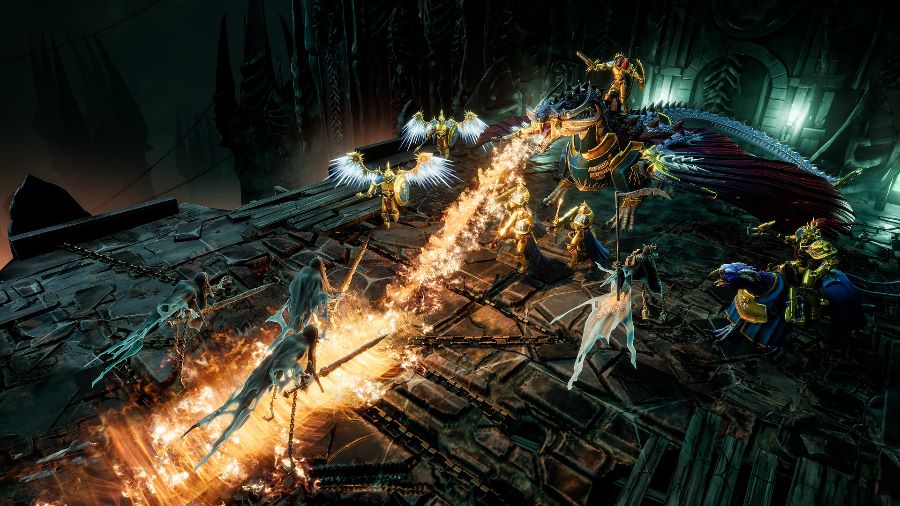 At first, you’ll only be able to pick the Stormcast Eternals faction, which makes sense since the first set of missions will act as an extended tutorial to teach you the basics. The Stormcast Eternals are mortal heroes that have been remade into god-like warriors in the forges of Azyr, ready to battle until the death. You’ll be controlling a Warband, which will be led by a hero that occupies the top spot. You can add new units to your Warband as you unlock them by progressing through the game to diversify your group with close-range melee powerhouses and long-range, more agile – but fragile – units. You’ll later unlock the Campaign Mode for the Nighthaunt and the Maggotkin of Nurgle, offering some nice variety.

You’ll move around each location hex by hex as you make the most of your units’ abilities to try and destroy your opponents. The left analog stick will be used to highlight each of the hexes on the battlefield, while the right one will be used to move the camera around the area so that you can make the right call based on your current situation. Highlight a unit and press the X button to select it so that you can then move it to a valid hex. If you have no moves left, then you’ll have to end your turn.


You will have to pay close attention to each unit’s armor value. Based on a unit’s armor value, and depending on the attack strength of its opponent, an armor save can trigger, which will negate any damage to said unit. The higher the difference between the armor value and an attacker’s strength, the better the odds of armor save triggering. Along with attacking an enemy unit, you can also decide to move your unit onto the hex it occupies to initiate a charge. If the enemy dies from the charge, then you won’t take any damage. But if it survives the charge, you’ll take retaliatory damage. 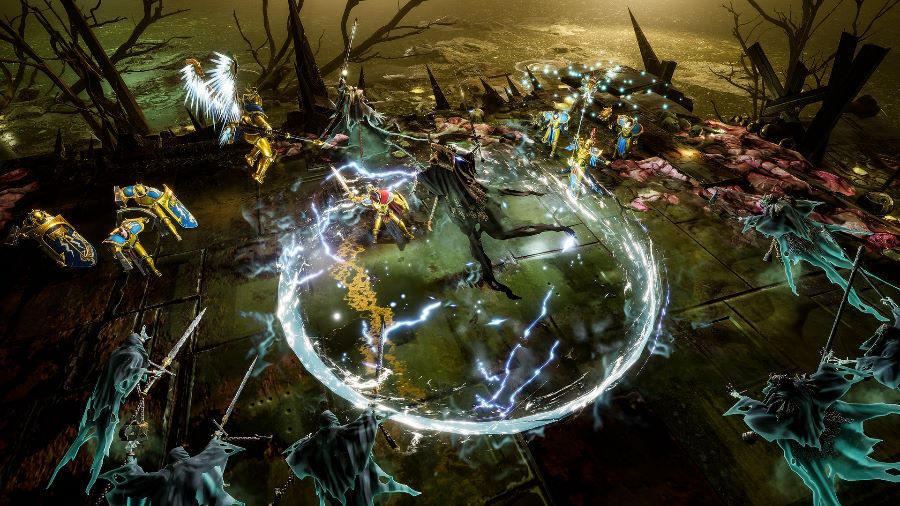 Aethyr will act as mana and will be used to cast active abilities, which is the game’s way of balancing things out so that you don’t end up spamming abilities over and over again. An example of an ability you’ll see early in the game is Challenge, which heroine Freya can use. As you’ve probably guessed, what Challenge does is draw the attention of enemies away from weaker units so that they attack Freya instead. You need to plan this right so that you don’t leave yourself open to too many enemies rushing towards your heroine.

For each mission, your first step will be to summon your hero into action so that it can lead other units into battle. To be able to summon into battle other units you’ve unlocked, you’ll need to spend your Power. The more Power you have, and the more units you’ve unlocked, the better your odds of being victorious. A hero is a very powerful unit, but it will have a hard time beating all other enemy units on the battlefield on its own. You will need to take advantage of the layout for each stage so that you can


After winning a battle, you will obtain warspoils. These could translate into gaining new units, obtaining new wargear, unlocking new skills, obtaining divine acts, or securing new lore from the Warhammer Age of Sigmar universe. By reading the lore, you’ll be able to learn more about the backstory of each of the factions in the game and their members, as well as get a better understanding of what each of them is fighting for. If you find gear that is not as useful for your current set of units, you can always offer it as a tribute to get some extra experience points in return. 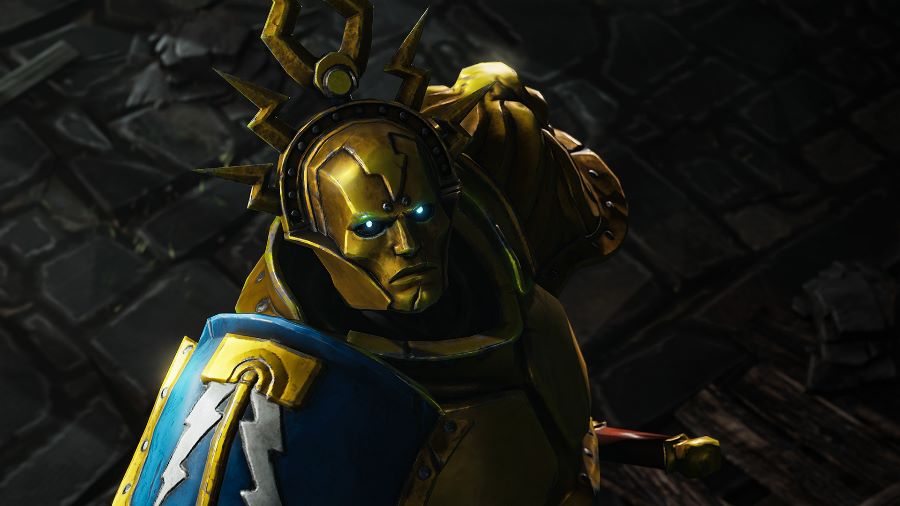 When you die – not if, but when – you’ll get to select a reward for your next run. Since you’ll be taking on a randomly generated Campaign Mode for each of your runs with Warhammer Age of Sigmar: Storm Ground, there will be a lot of trial and error thrown in the mix. Perhaps selecting an ability that makes it possible to heal all units within its area of effect while making them invulnerable could turn the tide of battle – as long as you remember that, it will also make it so said units can’t deal any damage nor use abilities. And since this one is a divine act, it can only be used once, and it will then be removed from your Warband. Or maybe you should select a powerful sword that deals more damage can help you recover from defeat at a faster pace.

Taking on the single-player Campaign Mode will allow you to learn all of the basics and to get a better understanding of how each of the different units work together as a Warband. You’ll notice how the more powerful a unit, the more Power it will require to be put into play. Because of this, you’ll need to value if, say, boosting up your group of Castigators so that they can deal more damage from a safe distance is worth having to wait a turn or two before having enough Power to summon them. Unused Power is also converted to Aethyr, which will allow you to use abilities.


Once you’re familiar with all of this, you might want to jump into the online multiplayer side of Warhammer Age of Sigmar: Storm Ground. Having more unit types to field, more gear to equip them with, and more skills to activate in battle will make it easier to survive during online fights against other fellow humans around the world. You’ll have to decide when you should use attacks that activate right away and when to use more powerful abilities that will have a delayed effect, making them deadly but harder to manage. 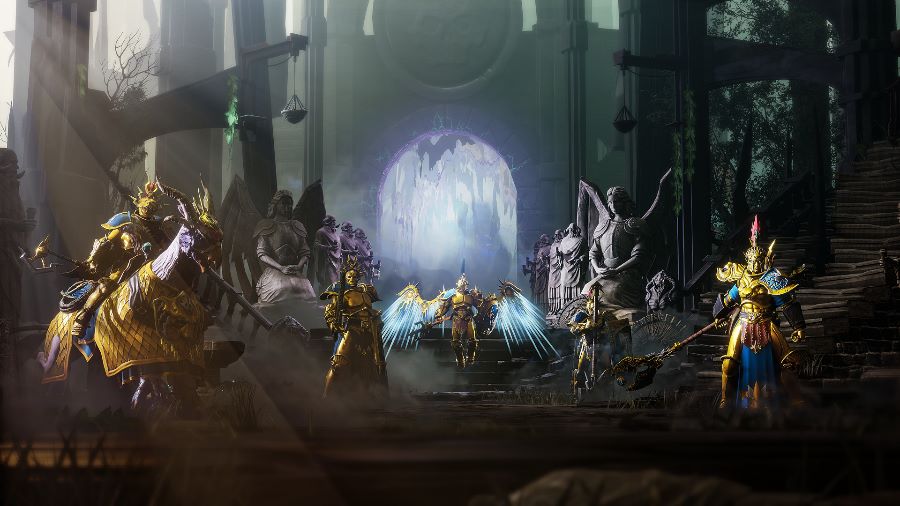 Warhammer Age of Sigmar: Storm Ground is a fun roguelike turn-based strategy game with a solid challenge and plenty of content to enjoy. With three different factions to play, as in the game’s Campaign Mode, as well as an online multiplayer component and plenty of customization options, this is an easy one to recommend on PlayStation 4. Warhammer Age of Sigmar: Storm Ground is out on PlayStation 4 with a $39.99 asking price.

Disclaimer
This Warhammer Age of Sigmar: Storm Ground review is based on a PlayStation 4 copy provided by Focus Home Interactive.

Alex Kidd in Miracle World DX Out This Month