BLAST YOUR WAY THROUGH AN INTERDIMENSIONAL ADVENTURE

Ratchet and Clank are back! Help them stop a robotic emperor intent on conquering cross-dimensional worlds, with their own universe next in the firing line. Witness the evolution of the dream team as they’re joined by Rivet – a Lombax resistance fighter from another dimension.

– Blast your way home with an arsenal of outrageous weaponry.
– Experience the shuffle of dimensional rifts and dynamic gameplay.
– Explore never-before-seen planets and parallel universe versions of old favorites.

PS5™ FEATURES:
– Feel in-game actions through the haptic feedback of the DualSense™ wireless controller.
– Take full control of advanced weapon mechanics, made possible by adaptive triggers.
– Planet-hop at hyper-speed via the near-instant loading of the PS5™ console’s SSD.
– Immerse your ears with Tempest 3D AudioTech* as you work to save the universe.
– Enhanced lighting and ray tracing render dazzling in-game worlds – displayed in crisp, dynamic 4K and HDR**.
– Choose Performance Mode to enjoy targeted 60 frames per second gameplay***.

I first got my hands on the Lombax and robot pair many years ago when I was working in a store, and I saw the original Ratchet & Clank hit the shelves. I was curious since it looked like a cute mascot platformer. I did a bit of research, and it seemed to be reviewing well, and that’s when my love affair with the series started. I’ve played every Ratchet & Clank game since then. Most are great games, but there have definitely been some that are not up there – mostly the spin-offs. 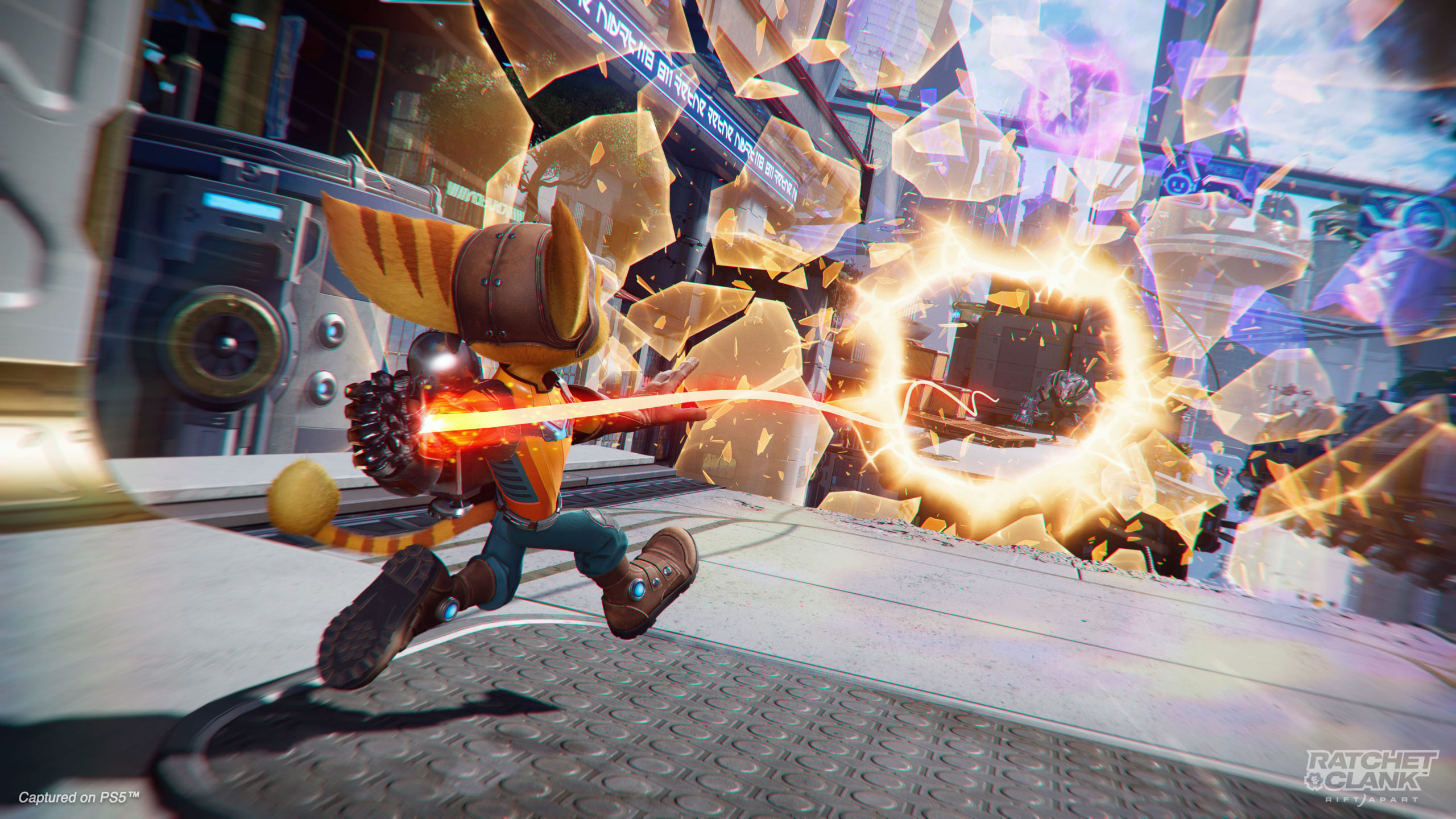 Rift Apart begins with a parade celebrating Ratchet & Clank. It seems like it’s been several years since they’ve needed to be heroes! But villains always do the things that villains do, so Dr. Nefarious crashes the parade with his hired goons to try and steal a gift that Clank was giving Ratchet. As you finally catch up with Dr. Nefarious, it turns out he was there to steal the rebuilt Dimensionator. After a battle with him, the Dimensionator is damaged, pulling you into an alternate dimension in which Dr. Nefarious has conquered the world, and you and Clank are separated.

Clank meets a different Lombax named Rivet, and she takes him on her journey through the galaxy. From this point on, you’ll jump between playing as Ratchet and Rivet, who share all their abilities, so they play identically to each other. From a story perspective, this is the best one for a Ratchet & Clank game ever produced, and you can tell Insomniac has learned a thing or two from their work on the Spider-Man games. I felt for the characters, especially Rivet, who is the best character to join the series in years. 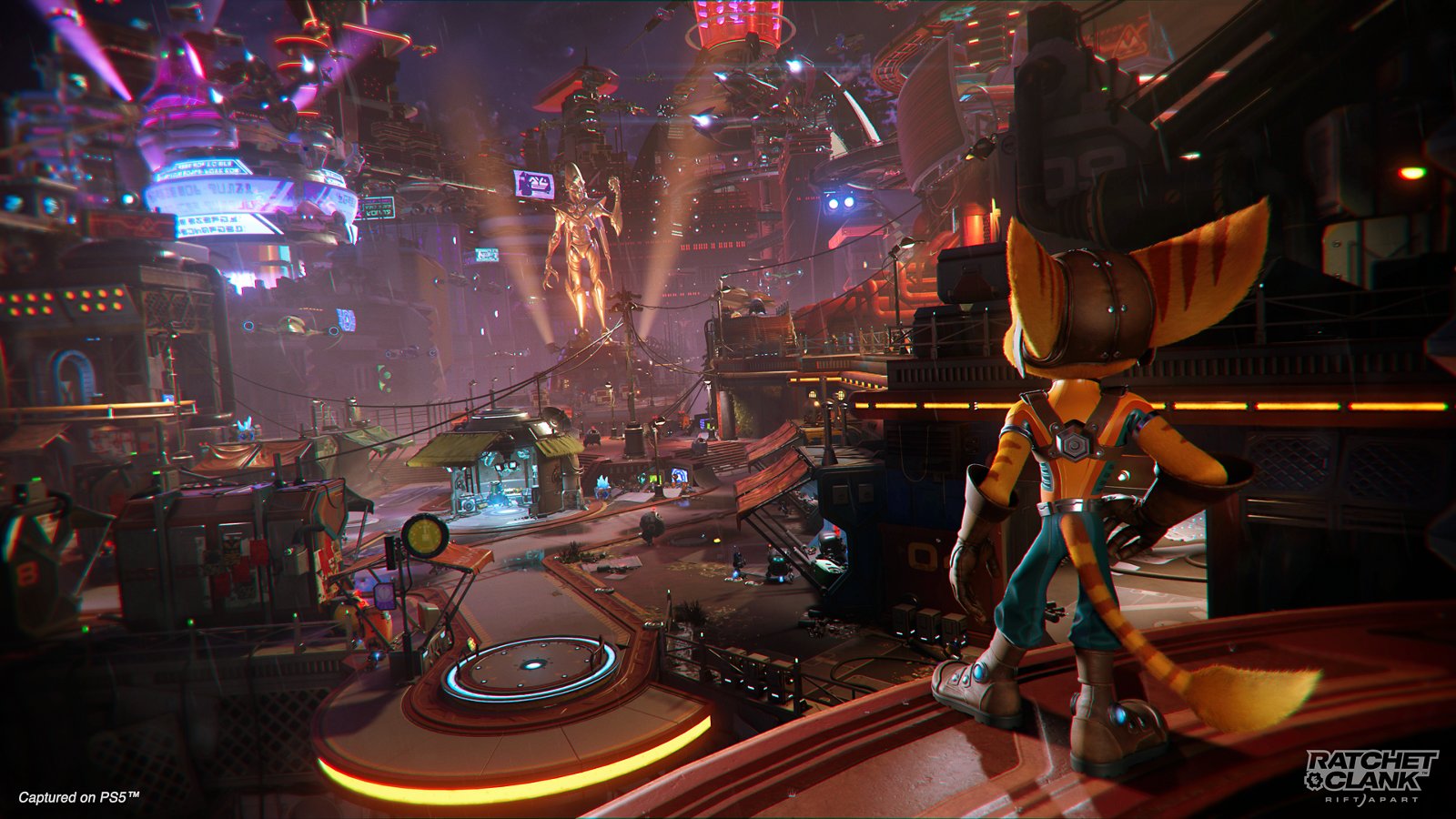 From a gameplay perspective, this feels like a Ratchet & Clank game. You start with a simple weapon, and as you defeat enemies, it will upgrade to new levels, and you’ll earn bolts which you can then use to buy more weapons. You will unlock a new phantom dash ability which you can use to zoom around during combat, making it feel really fresh. What really is the star of the show, as always, is the weapons.

For Rift Apart, Insomniac really outdid themselves with their arsenal with some great new additions and some returning favorites. Some of the highlights were the Topiary Sprinkler, a bomb you can throw which creates a sprinkler, freezing any enemies it touches and turning them into bushes, making them a temporarily easy target. The Ricochet shoots a ball out and using the Dual Sense Trigger, you can then time how it ricochets off the enemies for multiple hits. The Lighting Rod shoots out electric needles and will spread the electricity to other enemies around as well. The Blackhole Storm is a minigun with tons of bullets, which is great for mowing down large groups of enemies. I was also glad to see the Buzzblades, Glove of Doom, Burst Pistol, and other guns back for another round. I’ve only touched on a few of them, but the truth is the whole arsenal is really good. Oh, and if you find all of the Spy Bots, you’ll be able to assemble the RYNO 8, creating dimensional portals from other Sony universes! 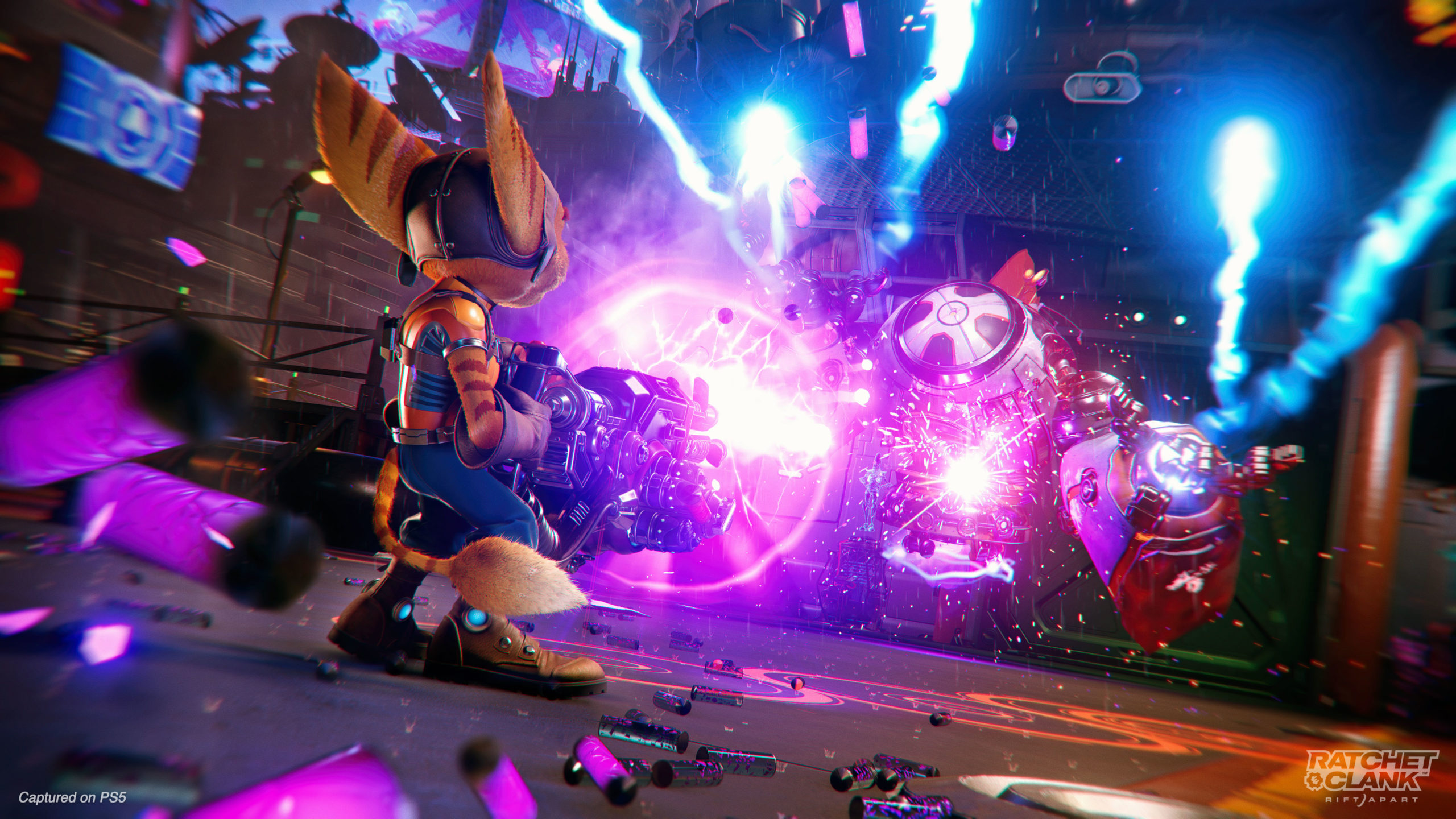 Typically, I find myself favoring certain weapons and just using those, but as I leveled up the weapons to their max level, I found myself then switching to other ones and leveling those up as well. You will also find Raritanium in the game, which can be spent on more gun upgrades as you level them up, making them even more powerful. I think one of the biggest advantages of the PS5 is the Dual Sense and the adaptive triggers, and Rift Apart uses those super well, allowing for a half-press and a full press for an alternate fire.

There are always some parts in the Ratchet & Clank games that don’t feel as great as the rest of the package, sections that usually involve Clank on his own doing some puzzle solving. However, this time around… I really liked them! You have to guide infinite possible Clanks through a course using different orbs to make them lighter, faster, heavier, or to create electrical connections to change the course. However, there are now minigames featuring a new character named Glitch, which is a program that can go into computers and delete viruses. I never found myself having fun here, as she walks around shooting from all angles and killing the viruses in the computers, often needing to hit switches to lower shields to attack them. They just felt like a chore, never really evolved, thankfully there is only a handful to complete. 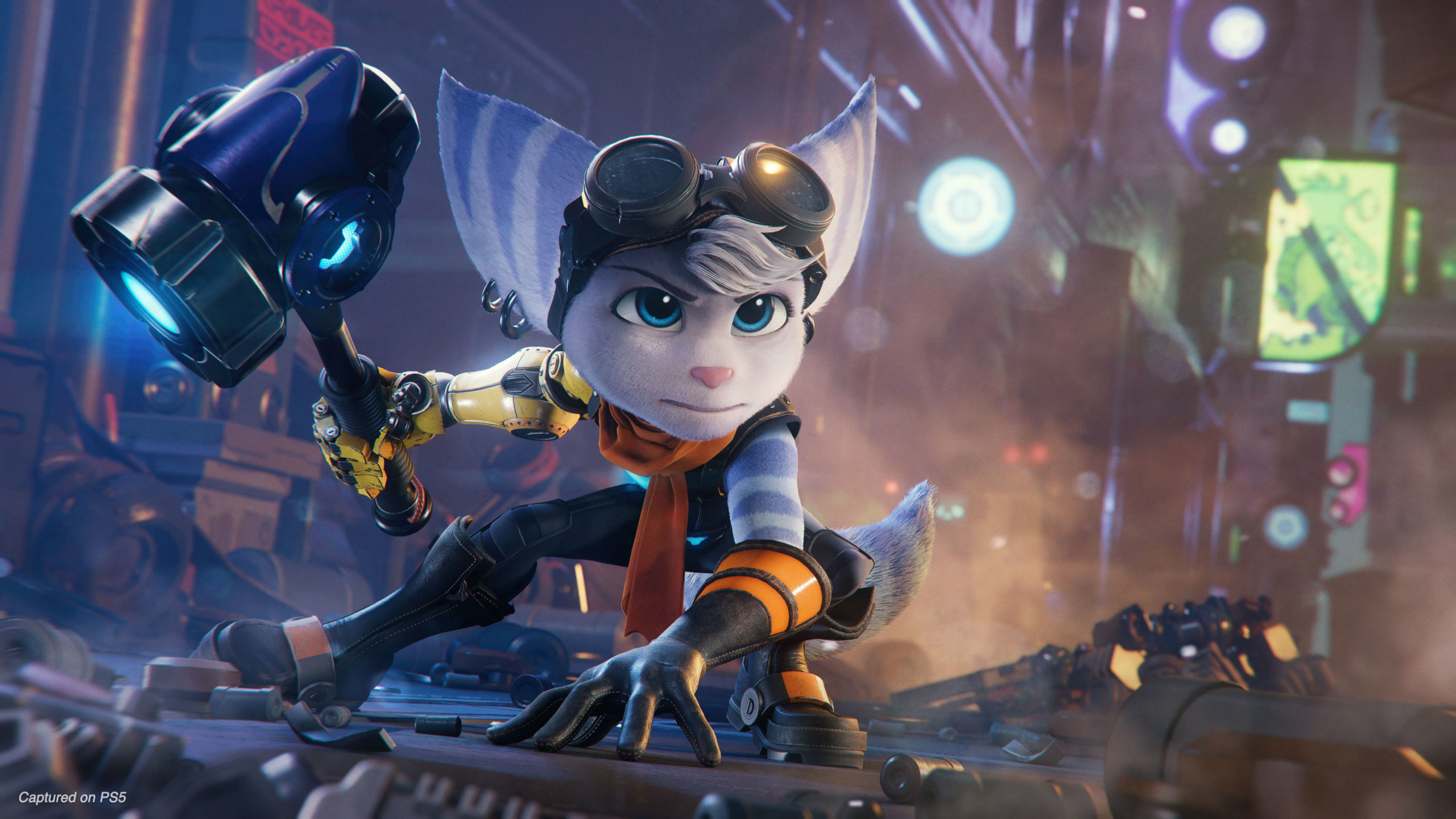 The worlds feel larger in Rift Apart as well, yet not too large. They are filled to the brim with detail and lots of collectibles to find. You’ll also find some Rocket boots partway through, making traversing the larger areas much quicker. What really makes these feel great, though, is the SSD inside of the PS5. It loads so quickly that they incorporated Rifts as a mechanic where you can tether on to them and pull the world towards you instantly with no loading times – it’s amazing to experience. On top of that, there are two levels that have you jumping between dimensions, completely changing the levels instantly, with no loading. I can’t wait to see what other games do with the SSD once they get more chance to fool around with it!

It’s drop-dead gorgeous as well. You can run the game in three modes: Fidelity 4K at 30 FPS, Performance at a dynamic 4K locked at 60 FPS, and, patched in at launch, Performance RT featuring Dynamic 4K locked at 60 FPS with Ray Tracing. You can try them all and see what works for you, but for me, the Performance RT mode was the way to play, featuring a smooth 60 FPS with reflections everywhere. I loved the way the Fidelity mode looks, but it’s hard to go back to 30 FPS. Oh, and be sure to take advantage of the Photo Mode since Insomniac does a great job of giving you a lot of tools to make your pictures look really cool. 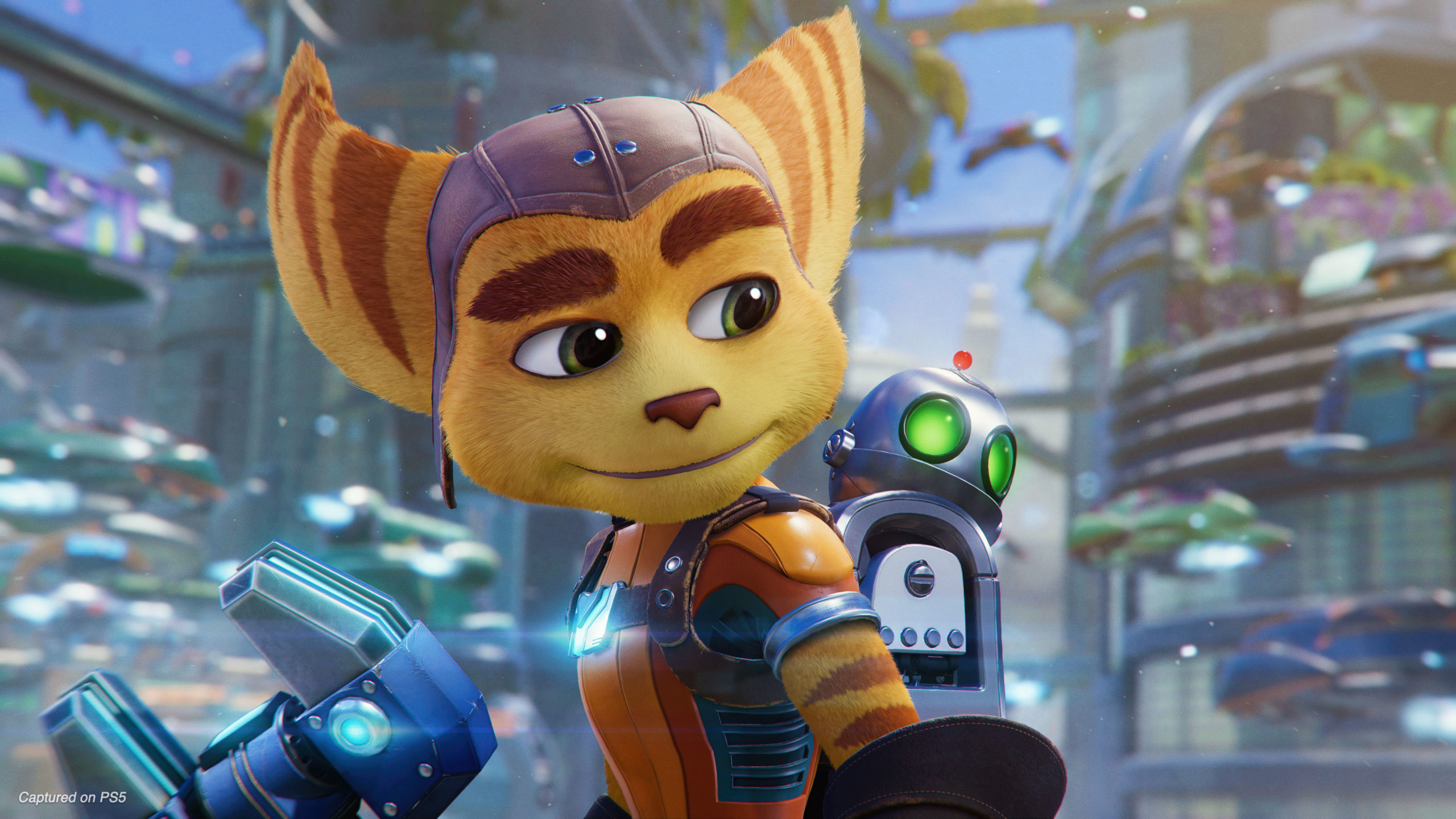 So, to sum things up, Ratchet & Clank: Rift Apart is really good. At this point, it’s become my favorite PlayStation 5 game and will likely replace Astro’s Playroom as the game I use to show off the hardware. It’s a really fun game with great gunplay, fantastic characters, great DualSense integration, and no loading. My only nitpick is the Glitch sequences, and even those don’t really leave that much of a stain. If you have been lucky enough to get your hands on a PlayStation 5, then this is a must-play game.

Disclaimer
This Ratchet & Clank: Rift Apart review is based on a PlayStation 5 copy provided by Sony Interactive Entertainment.