Guilty Gear is ready to go on PlayStation 5 in beautiful 4K and at 60 FPS! Learn more in our Guilty Gear -Strive- review!

◆Amazing Graphics and Animations
The cutting-edge 2D/3D hybrid graphics pioneered in the Guilty Gear series have been raised to the next level in “Guilty Gear -Strive-“. The new artistic direction and improve character animations will go beyond anything you’ve seen before in a fighting game!

◆New Revolution in Fighting Games!
Guilty Gear -Strive- brings a number of new and innovative game play mechanics designed to allow players new to the series to quickly learn the fundamentals while maintaining the deep, creative gameplay Guilty Gear is praised for. New additions to the series such as a wall-breaking mechanic will allow for new and exciting approaches to battle.

◆The fate of the universe will be determined…
The story of Guilty Gear, spanning over 20 years, will finally come to a conclusion in “Guilty Gear -Strive-“. The trials and tribulations of the series’ heroes and villains will finally be resolved. Discover the astonishing truth awaiting at the end of all things.

It’s been a while since we have had a new Guilty Gear Game. I was looking forward to playing Guilty Gear – Strive – last year, but it was unfortunately delayed to 2021 because of the worldwide Covid-19 pandemic. It’s now June 2021, and I have to say that the wait has been worth it!


As soon as I started, I do have to say that the first impression I had is that Guilty Gear -Strive felt a bit bare-bones, but digging deeper shows what the game has to offer. It has your typical Arcade mode, Survival Mode, Versus, Training, Missions, Story, and Online Modes. Speaking of the online, I got a chance to get a headstart with Guilty Gear – Strive – by taking part in the Beta periods, and I found the rollback netcode to be working very well during that period. As expected, finding online battles during the review period for Guilty Gear – Strive was a bit tricky since there aren’t many of us taking on the game before release, but the battles I managed to join had no lag or issues. 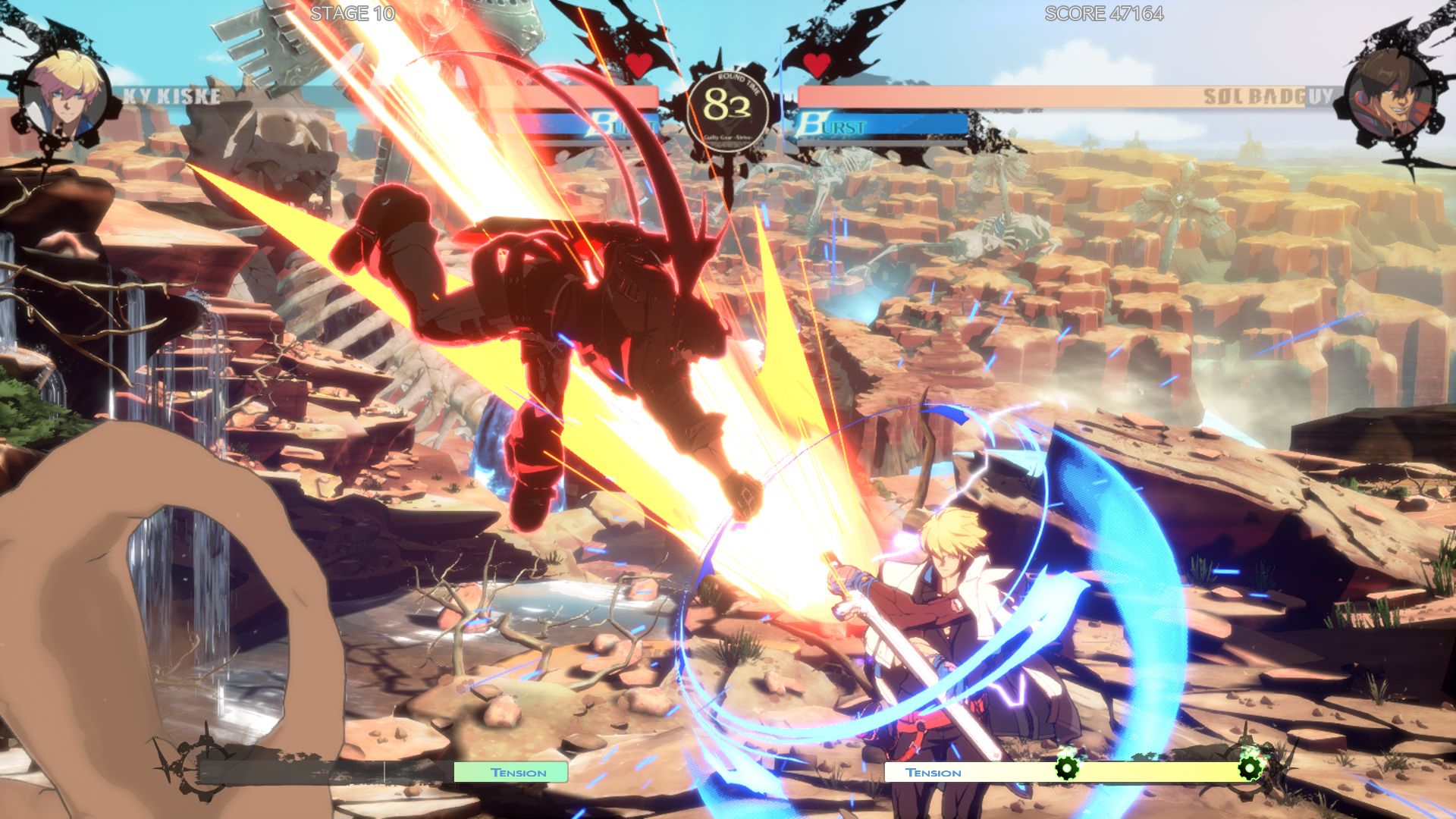 Now jumping into Arcade Mode, the available roster does seem small, but this is a launch roster, and we know that fighting games in the 21st century will usually add more fighters through a Season Pass system, and that is also the case for Guilty Gear – Strive. In fact, if all goes according to plan, the first DLC fighter will drop next month, which is definitely good news. You have the mainstays that you would expect in a Guilty Gear game, including Sol Badguy, Ky Kiske, May, I-No, Faust, Chip Zanuff, along with new characters Giovanna and Nagoriyuki. It’s a good mix of characters that bring together many fan favorites while also adding a couple of new characters, which is always tough to balance.


As I was playing the Arcade Mode, I was able to get into the gameplay loop right away. The first thing I noticed was things felt a bit more streamlined with a Tension Bar at the bottom, which is your Super Bar, allowing you to store up to two Overdrives. What’s different about the Tension bar this time around is that it will reset back to Zero for every round, really making you use what you have during each round. This shifted how I managed this bar entirely, really making the most of it during every round. This feels different than other fighters, which is a great start. The other meter is Psych Burst, which allows you to stop combos and get a chance to regroup. Roman Cancels are also back, allowing you to cancel into other moves and attacks, or stop upcoming attacks for a second. Honestly, I needed some extra practice to get a better grasp of Roman Cancels. 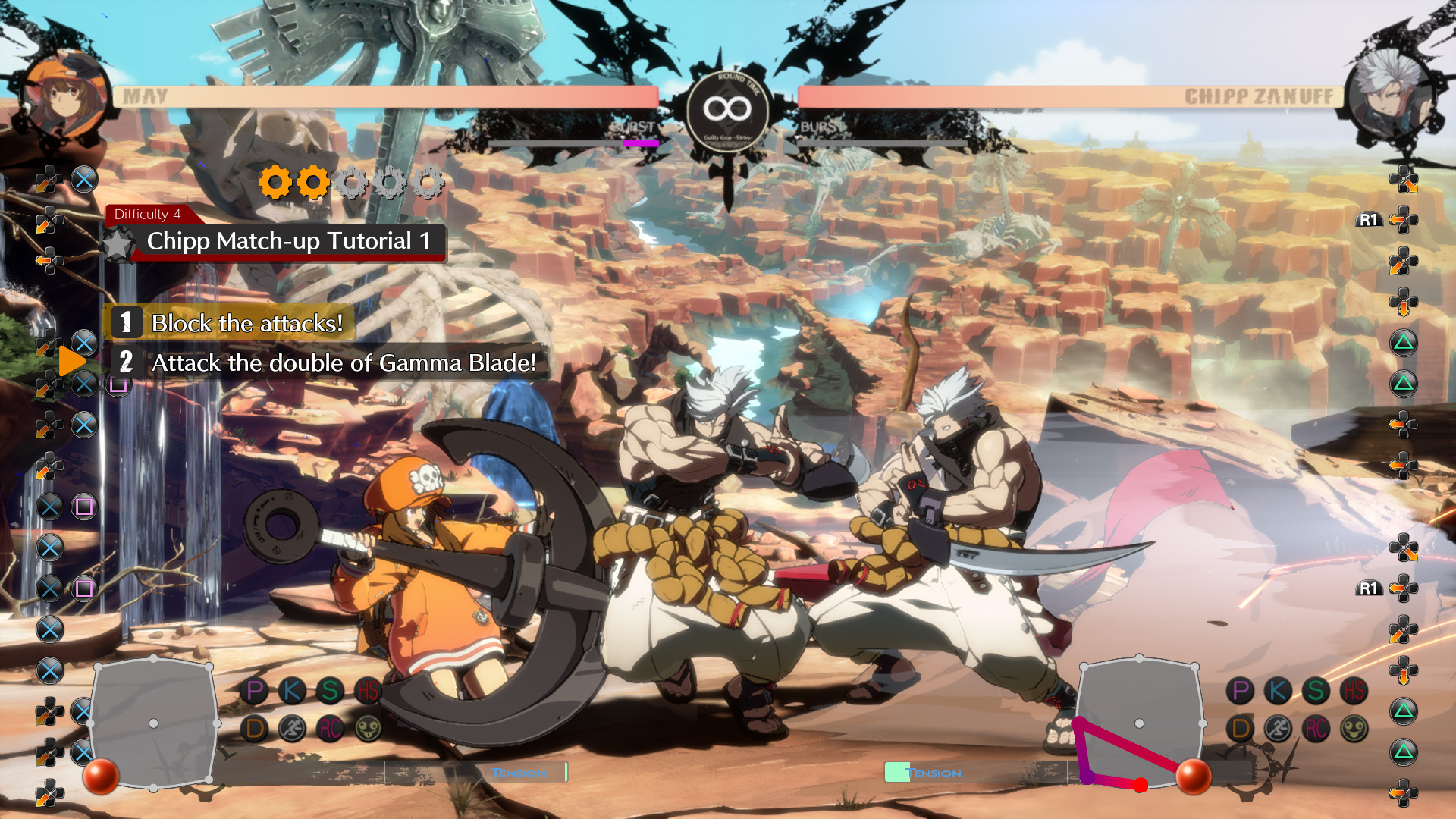 In terms of the characters, it’s a great selection. I immediately started using Sol and Ky, with both feeling like comfort food. They had the moves I remember and felt great coming back to. Giovanna was the standout for me, becoming my new favorite character. She’s very cool and has an accompanying Wolf Spirit wrapped around her body that is used in her attacks. She’s quick and hits hard, with a nice flow to her fighting style. Nagoriyuki is the new boss character in Arcade Mode and is also playable. He feels like a tank, with a single or two hits really doing a ton of damage to his opponents. As expected, his boss version is strong than his playable version. Chip is his usual quick self, which I always like in a character. Faust is still a weird character, throwing random stuff out, including weird power-ups and bombs. One of the power-ups gives your character an Afro. Anji Moto was another standout for me, as I loved his fighting style, which is very graceful, so I was glad to see him back. All of the characters on the selecting screen will tell you what style they use and will also show a difficulty rating to know which characters you should be using if you are starting out.


Guilty Gear -Strive- has a really good Training Mode, which is great for newcomers. The Tutorial will go through all of the basics quickly for new players, while Missions will actually help with learning combos and special moves. Finally, there is a training area where you can go wild, practicing combo’s, overdrives, moves, cancels, and more, so that you can find the right way to work your way up the ranks in the Online Rankings. There are tons of customizable options in the training area, so you can prepare for every potential scenario. 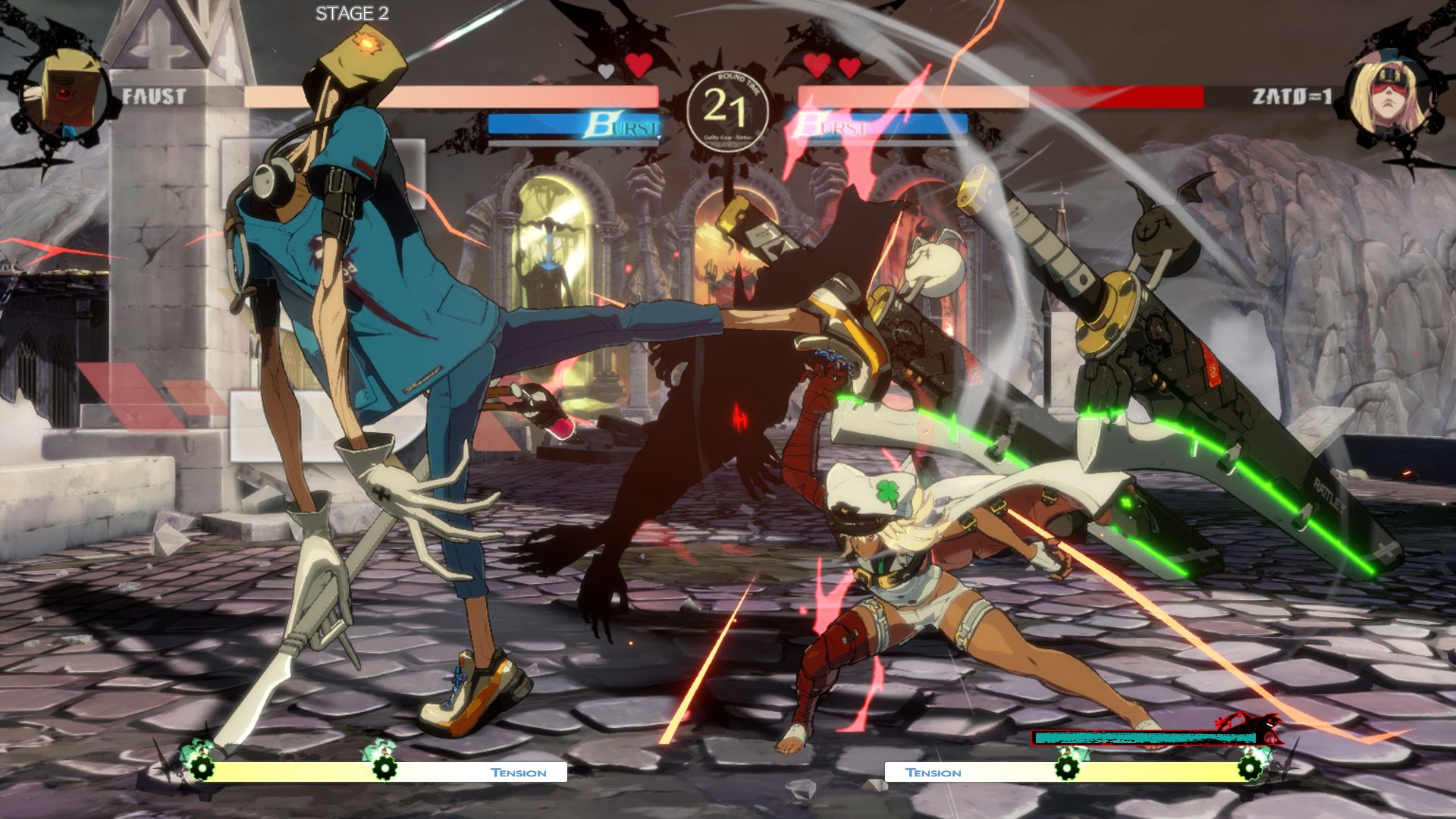 Now let’s talk about the game’s story. There is a Story Mode in Guilty Gear – Strive -, and it literally is what the word describes. There is no combat, so you’ll be experiencing an anime-style story setting that uses the in-game engine to tell a solid story. It’s gorgeous and great to experience since it makes it possible to learn more about the Guilty Gear universe without all of the obtuse and complex exposition from previous games. Previous games had had a ton of text and static images, so seeing everyone on motion with the great art style selected for this new entry makes a big difference.

There also is GG World Mode which features a Glossary of the many characters, places, events, and organizations of the game, so if you want to dig deeper, there’s a lot to learn there. A correlation chart featuring how different characters are connected at different points in the timeline makes it easier to understand some of the rivalries and relationships in Guilty Gear – Strive -, and there’s even a proper chronology of the series, which will allow players to follow along to see what has happened before and where things are heading.

Visually, Guilty Gear -Strive- looks amazing. I’m playing the PlayStation 5 version, which means it’s running at 4K at a smooth 60 frames per second in combat, making it quite the visual treat. On top of that, the game oozes in style, from how combos pop up on the screen to how the camera will shift for dramatic effect during certain moves to maximize impact, to the stages which are oozing personality. Since you can break through the walls, thus sending your opponents to other areas, each stage has a bunch of sections with a ton of depth. This feels like one of the most stylized games I’ve played since Persona 5, which is a huge compliment – it’s a feast for the eyes. The PS5 version has excellent loading times, being in and out of matches in seconds. There are no activity cards beyond trophies. However, the trophy cards feature percentage completion on them, which is always good to know. It would have been great to see some activity cards with the different modes allowing moving between modes even quicker, but with this being a game that is out on PlayStation 4 and PlayStation 5, one can’t have it all. 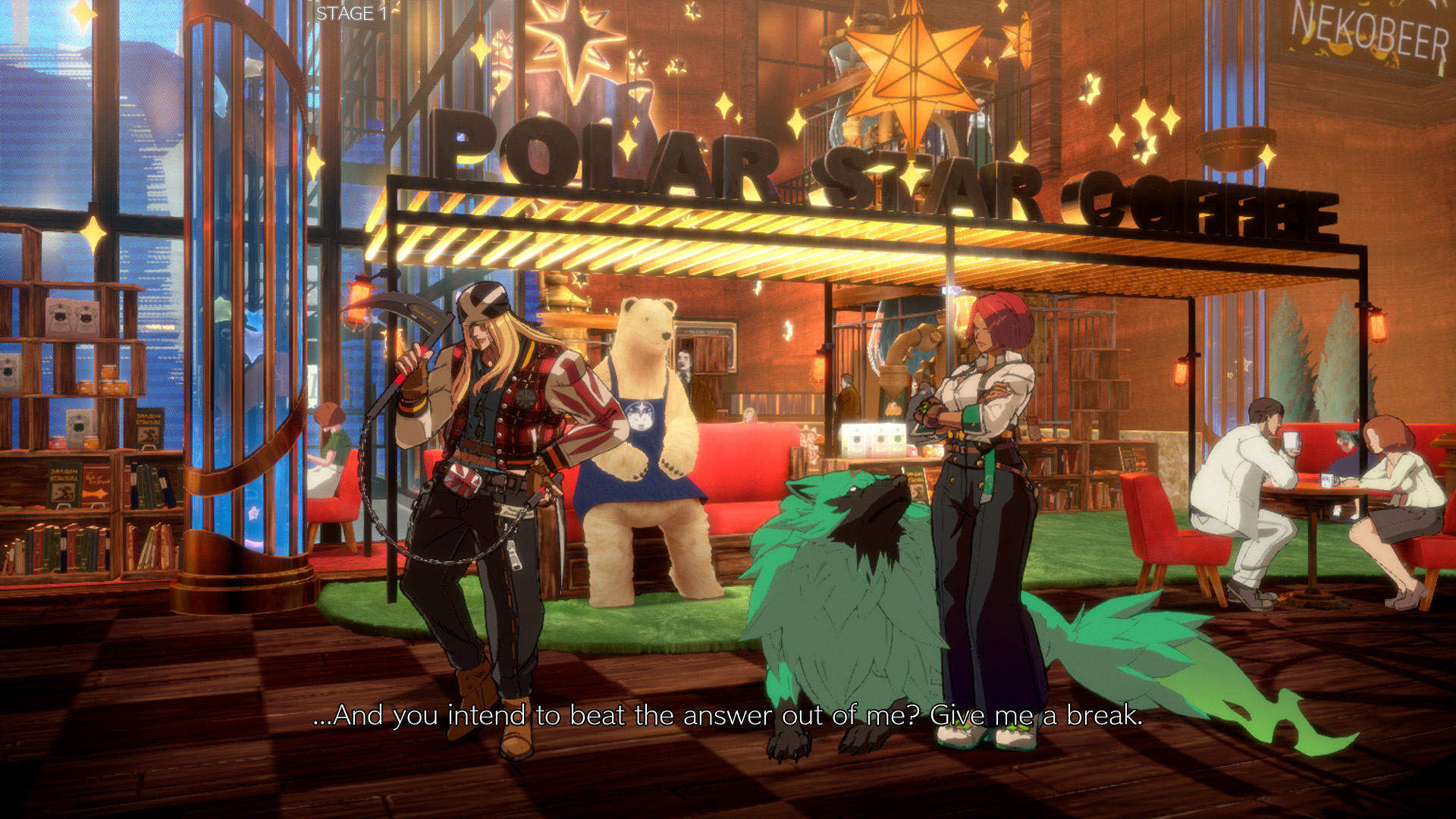 Has Guilty Gear -Strive- been worth the delays and the wait? Yes! While it features what feels like a small roster, it will grow over time with returning fighters, as well as some that are going to be brand new. The fighting mechanics feel great, with a more streamlined system that favors faster fights while allowing newcomers to the series to quickly learn the basics. It all feels great and looks great, with gorgeous visuals that make this one of the best-looking fighting games out there. The Story Mode greatly benefits from the new engine and the art style, giving us a great look at what the Guilty Gear universe has to offer.

Disclaimer
This Guilty Gear -Strive- review is based on a PlayStation 5 copy provided by ARC SYSTEM WORKS.

Willy Morgan and the Curse of Bone Town Out Today