Behold the Kickmen from Size Five, who has given us the very fun The Swindle as well as adventure Lair of the Clockwork God, also has a very interesting game for you to try on Nintendo Switch: Behold the Kickmen! For this updated edition, you can take on the Classic Mode for the game so that you can play it how it was originally intended… or you can go straight into the Ultimate Football Edition Mode! For Ultimate Football Edition Mode, all skills are unlocked, and you can even use cheats! What will you do? 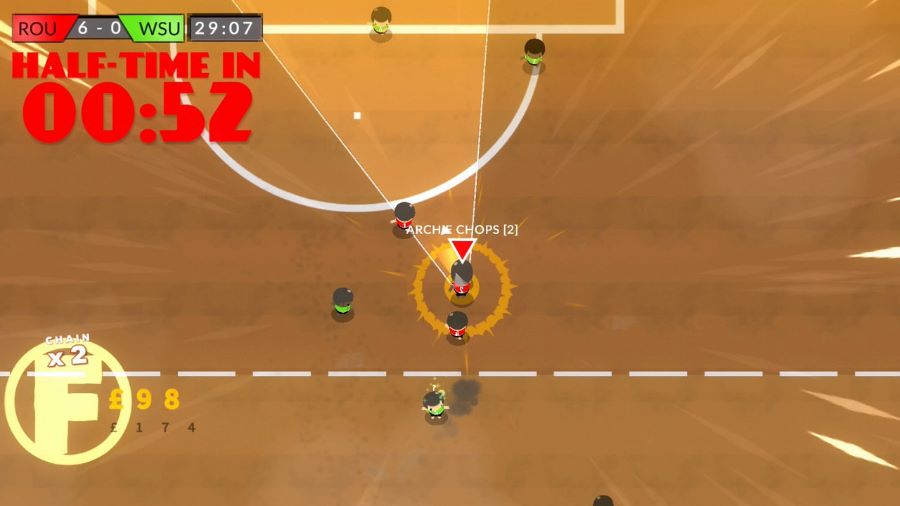 To give you an idea of what to expect, Behold the Kickmen starts with a warning screen that clearly states that the game was created by someone with zero understanding – or interest in – football (what you might know as soccer). There was no research done into the matter, but the developer is very confident on how the game you’re about to play is 100% accurate in representing the aforementioned experience. Once you press A to acknowledge you have read this and fully understand it, you’ll be ready to go.


Because of all this, you should definitely take a look at the tutorial for Behold the Kickmen to get a proper feel for what the game has to offer. Mind you, if you go into Classic Mode, most of your kickmen’s abilities will be locked, and you’ll have to teach them how to do this and that after each match, you win. Based on your performance in each match, you’ll earn money you can then use to manage your team to train them into becoming the best kickmen they can be. You’ll be able to train them in ball skills, tackling skills, staminae, goldkeeper skills, and teamplay.

You’ll use the left analog stick or the D-Pad to move your kickmen around the football arena. If you want to sprint, press and hold down the ZL or ZR buttons. You’ll get to play football by using a football. Once it’s in your possession, you’re going to have to do a goal. You can also dash left or right to avoid your opponents, but you can only do this once while having possession of the ball since it won’t recharge unless you lose the ball and regain possession. 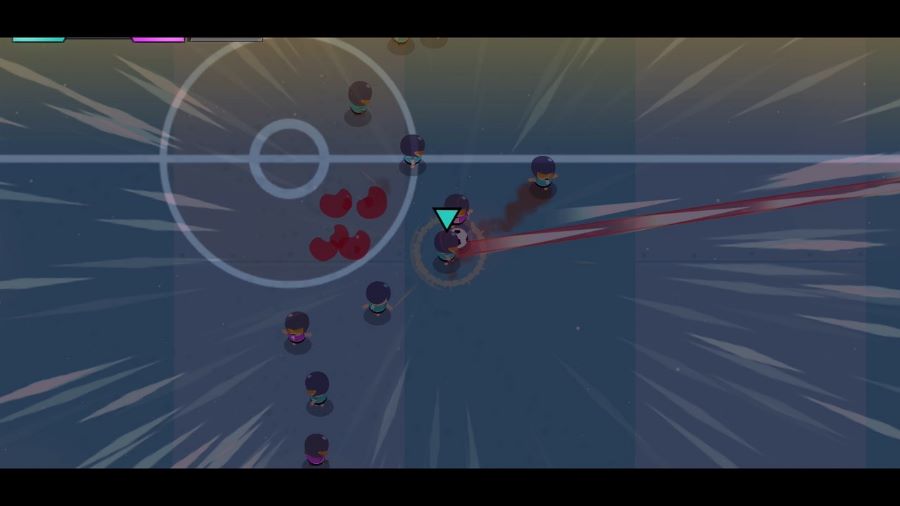 You’ll have to get used to dribbling around with the ball, which is technically the same as running, except at a slower pace since you have to control the ball. In Behold the Kickmen, making the ball go through the holes at the end of the football arena, which are called goals, will reward your team with points. The further away you are from the ball when you give the ball a big kick to send it through the hole, the more points you’ll be awarded. To kick the ball, press and hold down the A button. The longer you hold down the button, the more you’ll charge your shot, giving it more power while making it be less accurate.


Kicking the ball with a proper, solid big kick is crucial for beating the mighty warriors known as goldkeepers who will defend the goals with their lives. Along with charging up your kick before unleashing your power onto the ball, you can also curve your shot a bit either by tilting the right analog stick, or by using the motion controls for the Nintendo Switch Joy-Con. Just remember that the longer you hold down the shoot button, the more powerful your kick, but it will end up not being as on target as if you, say, apply half of your strength to it. 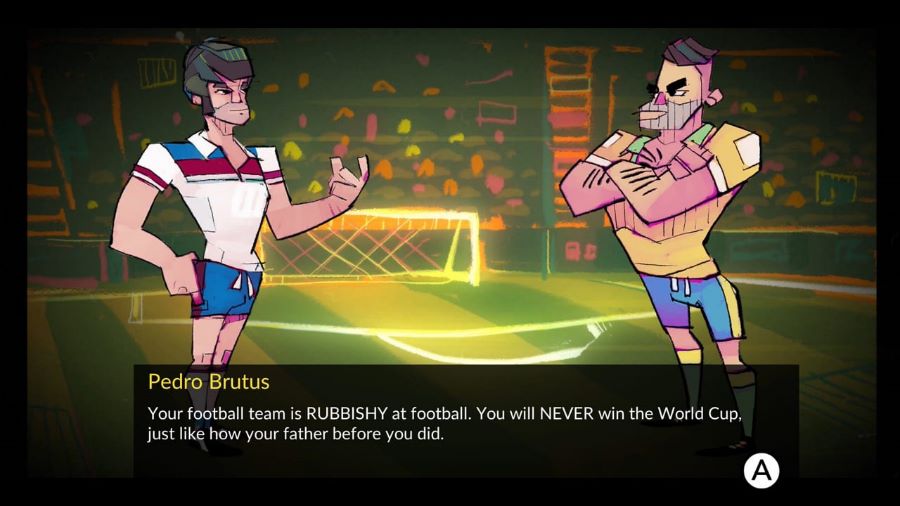 While each kickman is an awesome specimen on its own, football is a sport that is played in teams, so you’ll have to make the most of what your teammates can bring to the table. Dribbling and using your power for a big kick to get all of the points is all nice and well, but if you can fool your opponents and pass the ball to a teammate that is better positioned to score points, you should pass the ball! To do this, pay attention to the lines that connect kickmen so that you can quickly tap the A button for a pass.


Since you need to have the ball to be able to give it a big kick in order to earn lots of points, you should make sure your opponent doesn’t get its hands on it. If you lose possession of the ball, you should quickly sprint towards your opponent and give it a good, old-fashioned tackle by pressing the Y button. Press and hold down the button to charge your tackle, and then pay attention to the tackle possession identifier! If you press the Y button again when it’s orange, you will immediately gain possession of the ball instead of having the ball go out flying in who knows what direction. 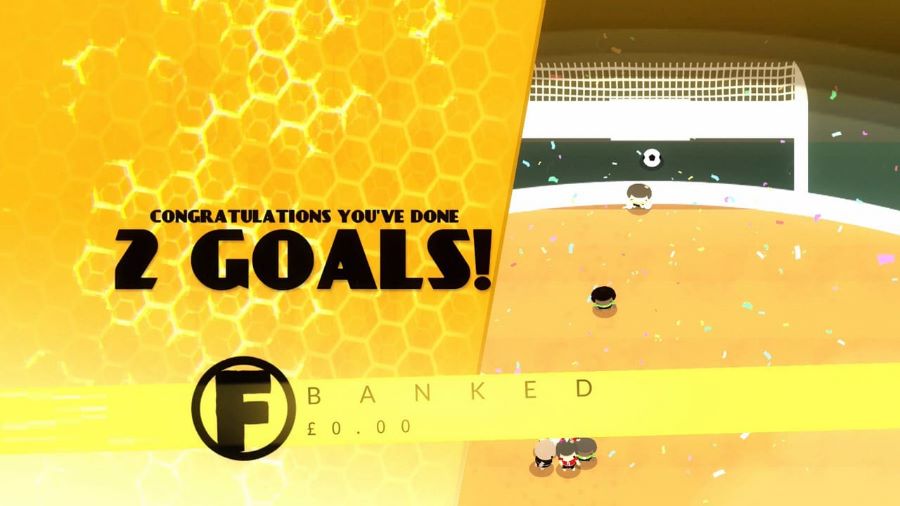 Behold the Kickmen is a must-play on Nintendo Switch. Its take on football is hilarious, giving us a round field instead of a rectangular one, on which the ball just bounces off the sides to keep the action going, wrapped in a funny story you’ll experience between matches in which things can get pretty hectic snd silly. Offsides can be triggered at any time if you’re left standing on the wrong side of the field once a random timer counts down, extra time is dealt with by collecting clocks for, well, extra time and more. Behold the Kickmen is out on Nintendo Switch with a $3.99 price, making it an easy one to recommend.

Disclaimer
This Behold the Kickmen review is based on a Nintendo Switch copy provided by Dan Marshall.