[PS4] Buildings Have Feelings Too! Review


So, as I was hanging out with my friends Samantha, Miranda, and Charlotte. Samantha was being her usual uncouth self and talking about yet another guy she met at a bar last night when Charlotte, in what was clearly a bizarre attempt to change the conversation, pointed to a building and said, “Aww, that building looks so sad.” I felt bad for Charlotte and her poor attempt to change the conversion, which clearly did not work, but it did get me thinking. “Can buildings have feelings too?” If Merge Games and Blackstaff Games are to be believed, the answer is an emphatic yes!

“Buildings have feelings too!” I kid you not. That’s the actual title. Is a city management/puzzler game presented on a 2D plane where your building on legs avatar moves across the plain, interacting with all the buildings you put down? The 2D nature of the game is in contrast to other city management games that try to offer a top-down isometric or a 3D view that those familiar with the genre will be used to. 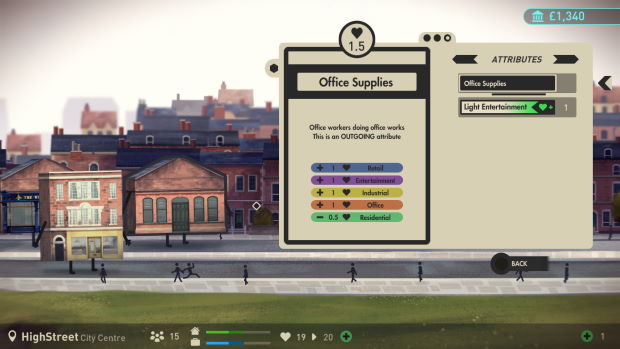 The 2D look allows the game to have a unique feel,m but sometimes this creates more problems than it solves. Using the left analog stick, you move your avatar from left to right until you arrive at particular spots or buildings you wish to interact with. This right away presents two of the main problems with the game. Even with small maps, scrolling across the available space can take a large amount of time which can make navigation a chore when moving from one end of the map to the other. 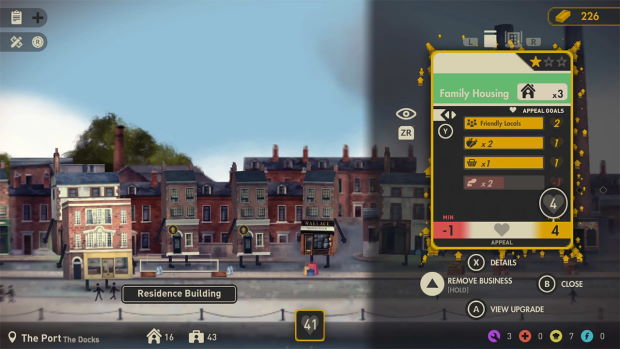 The meandering pace might be in tune with the style of gameplay that the developers were aiming for. “Buildings” is a game all about taking the time to focus on the needs of your individual buildings and making sure their needs are met. Each building you can build falls into five categories, and in order for those buildings to grow and evolve their ratings, their individual needs must be met. These needs usually come from a need to be close to particular buildings through adjacency or to be as far away from others due to their adverse effect on the local space.

As this is a puzzle game at heart, understanding where everyone needs to go is paramount to being successful in this game. This is why the developers opted for what feels like a tedious pace to navigate the map, especially if you find yourself trying to solve two problems at opposite ends of the map at the same time.


A couple of times, I managed to work a building’s rating to its maximum only to have it immediately start falling into disrepair without any explanation why this was. I checked its needs were being met, and there were no negatives surrounding it, but no explanation could be found to reason what was going on. I decided to swap the building for the exact same copy that was thriving at another location. Thankfully the game allows you to do this by pressing the R1 button on the desired building, moving it from one location to the next without having to delete and rebuild. Bizarrely, the new building I placed in its space survived perfectly well, but the building I moved to the new location continued to drop in quality. Like a weird virus, my “unhappy” building started to infect those around it with its unhappiness. I needed somewhere to move my infected building until I could figure out what was wrong with it, then I came across the next problem you face by having such a small map. It really doesn’t take much to fill up your map.

With each neighborhood, you only have a finite number of dots on the map to build, and each building type requires a certain number of dots and some breathing space between them and their neighbors before you can build, which understandably plays into the puzzle side of things. Meet the criteria of each level within the space given to progress does seem like sound logic. The only problem is the frustration factor, and this becomes even more clear when you are faced with some puzzle setups with buildings that cannot be moved.

One frustrating level early on is where you are asked to convert one building into a new type and build up its happiness to a high enough level. I soon realize the best way to succeed is to convert as requested then build a replica of the old building right next to it, but because the original building could not be moved or shifted along, I was randomly left with a busy map with a wealth of buildings that were mostly useless to my endeavors. This wouldn’t be such a problem if I was allowed to reload my save.


This brings me to the main problem that mars this game. The game autosaves your progress, which under normal circumstances would be fine – even welcomed. But in a puzzle game, the last thing you need is to unintentionally lock yourself out of a solution to solve a puzzle only to realize there is no way out but to restart the game.

When I found myself with three buildings inexplicably complaining about an issue and at the same time, all I needed to do was build one particular structure and win the level. I found myself in a bind as I had seemingly run out of buildings in the particular category needed to create the building because, of course, a game of this type has an arbitrary limit on how many types of a building can be built. 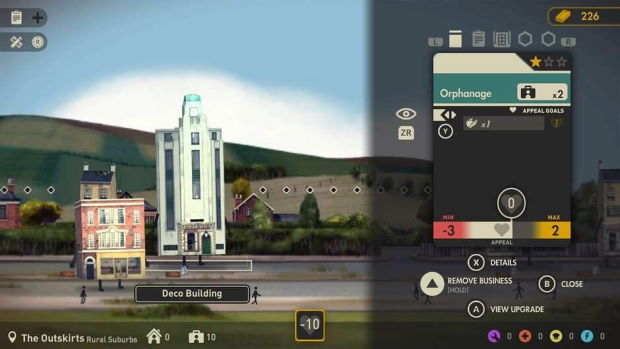 I scoured my map to find the building in question, but because most buildings look the same, it was difficult to know if I had built the structure in question already, and if not, which other building I could knock down to assist me. Pressing the L2 button allows you to know, at a glance, the names of the current buildings in your sight, but even this function feels useless when you remember that you still need to run across the map to see every building and learn their status. I decided to fix the unhappy buildings before they infected more buildings, only to randomly run out of the golden bricks resource used to do anything in the game. Yes, I could gain a few more by meeting the needs of buildings on my map and helping them grow, but when I do not have enough to build in the first place, it’s times like these you need to acknowledge you made a mistake and restart a map. But, alas, no restart level function and no manual saves are available, meaning that I had to restart the entire game.

The idea behind the game is intriguing, and the presentation in the style of a quaint British quiet industry town is charming, as is the soundtrack. But the game features way too many frustrating elements to be worth the effort. Perhaps maybe if more time had been focused on improving the process of navigating the map and the menus, the experience may have been a lot more improved than it was, but ultimately, like its 2D maps, Buildings Have Feelings Too! just falls flat.

Disclaimer
This Buildings Have Feelings Too! review is based on a PlayStation Vita copy provided by Merge Games.

Warhammer: Age of Sigmar – Storm Ground Out This Month