Other features from past Star Wars™ Pinball releases return:
• HAPTIC FEEDBACK for controllers so it feels like actual pinball
• CAREER MODE for short, targeted gameplay sessions
• FORCE POWERS to power up your play
• A CANTINA JUKEBOX of John Williams music


Let’s just get this out of the way: whenever I review pinball games from Zen Studios, I always make sure to mention that their pinball mechanics are absolutely the best in class, offering us really good pinball games that are a ton of fun. Every review I do from them could be copied and pasted about the solid gameplay mechanics and how great the physics are. I’m not going to go into too much detail into that side of things, so you should know they are great, and if you enjoy pinball games, you’ll love the ones included in Star Wars Pinball VR. 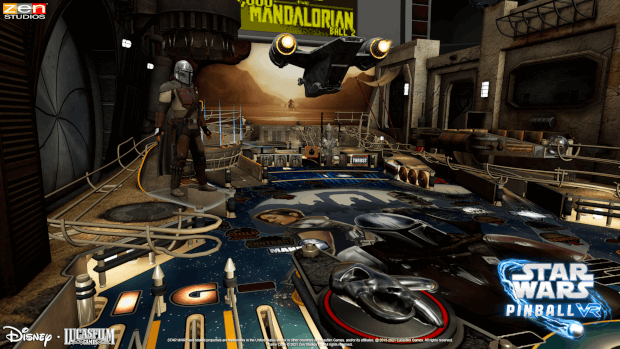 I have played a lot of these tables before. Six of the tables were existing tables brought to PlayStation VR, while two of the table are brand new. This gives new life to the older tables while still bringing some new experiences to the mix, the best of both worlds. It is worth noting that the tables picked, for the most part, seem to avoid the prequels and the newer trilogy and content. Not sure if there are plans for maybe another collection featuring more tables, as they have a bunch more to package together.

Now playing pinball in VR feels very realistic. You look down at the tables, can peer around them, and it really gives you the feeling of being in an old arcade. They start you in a pretty empty room, “Fan Cave” of sorts on which there is one pinball table in the center. I quickly realized that this one table housed all of the tables and would change between them, which was unexpected and pretty neat. As I started playing each of the tables, I noticed different Star Wars collectibles all over the walls. As someone who has a family and doesn’t really have an empty room to dedicate this type of space to collectibles, this was really cool to see in VR!


As I continued playing, I kept lining the walls with more and more things. I started taking more time just checking stuff out around the room. I thought how cool this was and why we haven’t seen other VR games do something similar, especially for established franchises. The detail on all of them was really cool, and I found I spent a ton of time checking them out between my pinball runs. 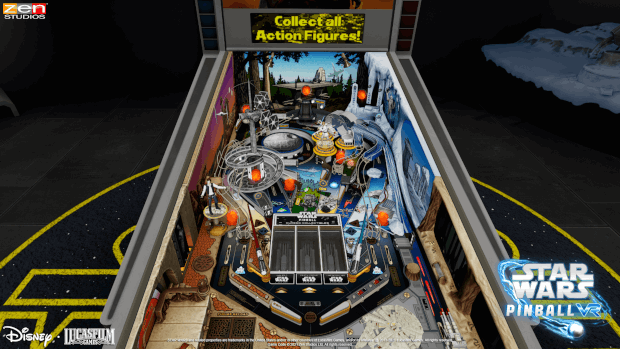 Now onto the tables themselves. All are great, and the ones I had played before felt great since they’ve been given a fresh coat of paint. Playing in VR gave them new depth, seeing larger-than-life characters represented standing above the boards was awesome. All of the tables have a neat mini-table you can go to by fulfilling certain conditions as well, which is super fun. Honestly, these are some of the best-designed pinball tables Zen Studios has done.

Something new to consider is the Career Mode. For this one, instead of playing the tables for high scores, it throws random objectives for you to complete while switching the tables on you. You’ll earn stars for how well you do, and you’ll get more perks featuring force powers that you can use on the board, which was a cool addition I didn’t expect and honestly helped me with some of the harder career objectives down the line.


Playing in VR adds elements that just weren’t there as an option on the standard tables. As you play, in your peripheral vision, you will see characters from all over the Star Wars universe which really adds to the immersion – my favorite being Mando and Grogu, since they also had the best voice work. Honestly, the other voice work falls kind of flat. The sounds in it are a different story since the tables feature all of the sounds you’d expect from a Star Wars game, from lightsabers, ships taking off, pistols being fired, and everything else expertly. This sounds authentically Star Wars, which makes good use of the license. 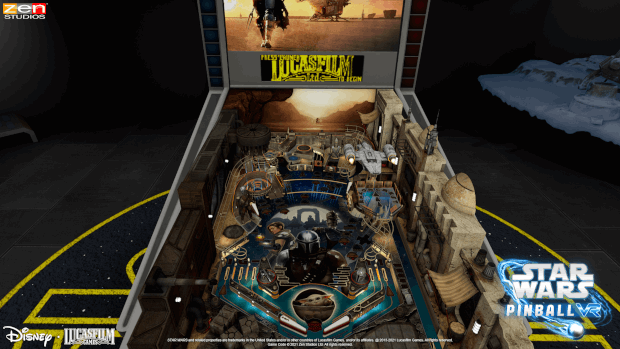 Star Wars Pinball VR is one of the best VR games I have played. PlayStation VR breaths new life into older tables, while the two newer tables are a great addition to the set. Everything looks and sounds like Star Wars. The Fan Cave featuring unlockable Star Wars memorabilia was excellent as well. This is a great package for any Star Wars fan or pinball fan, making it an easy one to recommend.

Disclaimer
This Star Wars™ Pinball VR review is based on a PlayStation 4 copy provided by Zen Studios.