The Colonists from Auroch Digital is a colorful and fun resource management city building sim on PlayStation 4. Learn more in our The Colonists review!


In The Colonists from Auroch Digital, you’ll be taking on a colorful and fun resource management city building sim on PlayStation 4. It’s the middle of the 21st century, and, as expected, lots of advancements have been made in the fields of artificial intelligence and robotics. Thanks to this, scientists have started to develop and deploy self-aware printable robots that are capable of simulating human needs for shelter and sustenance. A group of said robots realizes that they have no real place on Earth, so they commandeered a rocket ship and flew out of the planet in search of a new place they can call home in order to fulfill their dream: to be human. 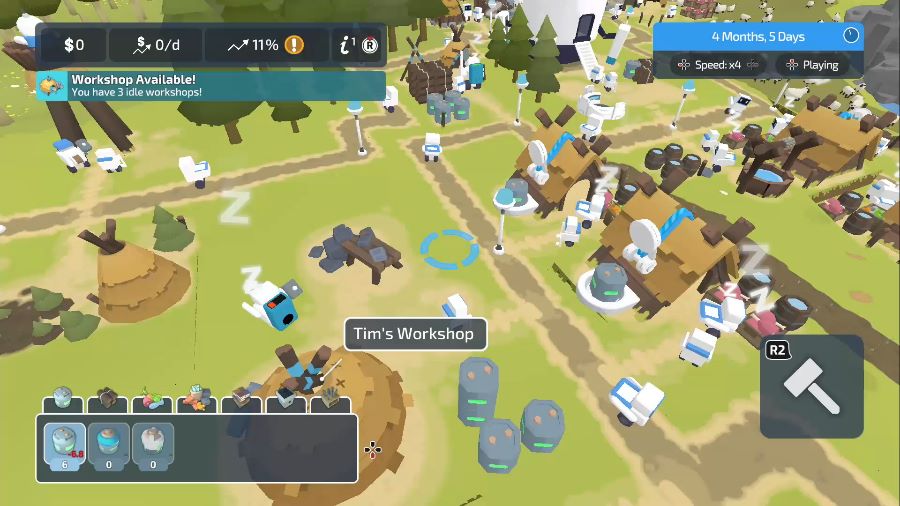 Once you’re ready to play, you can take on the Campaign Mode, which will have you building your new home or competing against other AI colonies to dominate the area. There’s also Challenges Mode in which you can take on completing specific objectives so that you can try and also do it as fast as possible to earn a bronze, silver, or gold medal for your efforts – these include things such as building a boat in mission 3, or selling one of each resource without purchasing any in mission 8. There’s also a Sandbox Mode where you can tailor your experience by selecting the territory, if there’s a fog of war, a market if you need unlimited spaceports, if construction should be free or not, and so on. For this one, you can also pick the map you’ll be playing in.


But before you dive into any of the other options, you should definitively take a stab at the Campaign Mode since the first missions will also act as a tutorial to teach you the basics. Your first action should be to review the area you’ll be building on so that you can start to plan where you should place the roads that will connect each of the structures you’re going to build. You’re going to need resources for this, which are listed at the bottom left corner of the screen. The resources section can be navigated by pressing down on the D-Pad and then moving left or right as needed. 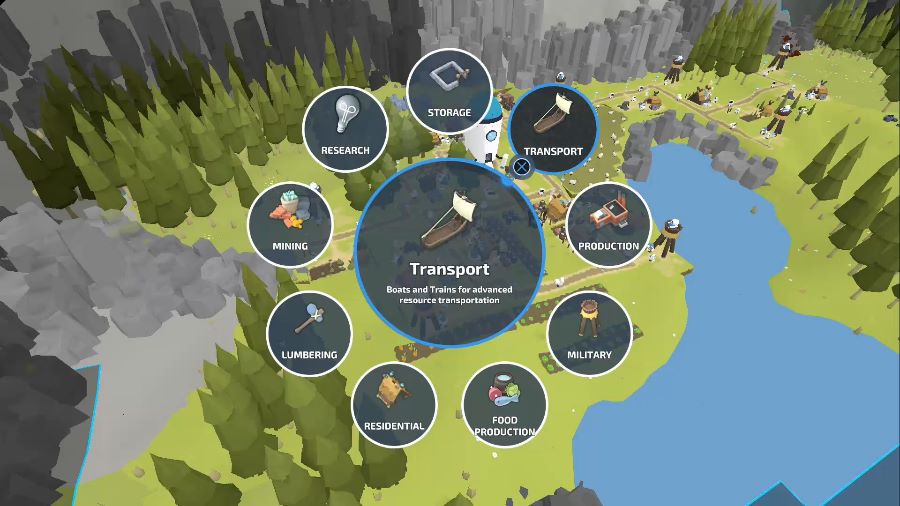 You’ll move the camera around with the left analog stick, rotating it with the right one, which can also be used to zoom. To tilt the camera a bit, just press and hold down the L2 button and move the right analog stick up or down. To carry on, you can press the R2 button to bring up the radial menu, where you will have six options: build, advisor, management, bulldoze mode, path, and road. Build will allow you to construct buildings and roads. Advisor will allow you to review your current objectives. Management will display useful information about your colony’s technology overview, statistics, buildings, and priorities. Bulldoze mode can help you destroy buildings and roads that might be getting in your way. Paths are what will connect buildings to roads, and roads are what will connect your colony’s buildings.


There’s a lot of things to build if you want to have a successful colony. For example, you’re going to need a Lumberjack hut to be able to create the logs you’ll need for your first structures. But to get the logs to where they need to go, you’re also going to need to build roads! Roads can be between four and six tiles long, and you can set waypoints to start to build the required connections. Once a road exists, the ship will print out a lumberjack that can start to cut down the surrounding trees to bring them back to the lumberjack hut. 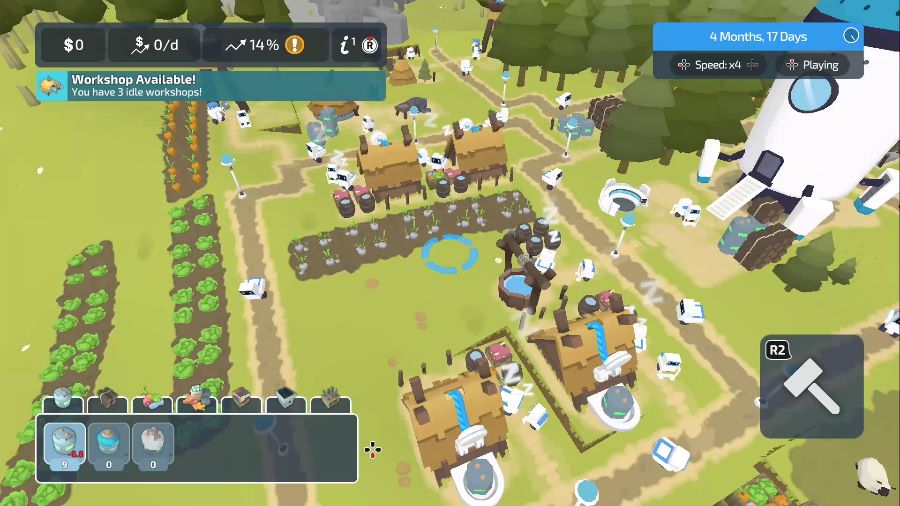 You’ll start out with a bit of energy from your colony ship but will need to generate additional energy at residences. Residences won’t produce energy on their own since they will also need water. For this, you’re going to have to find a suitable location where you can build a well. Logs and water won’t be the only resources you’ll need during your time with The Colonists. You’re also going to need stone, iron, fish, and more! You’ll also have to replenish some of these resources. You can’t expect to use your lumberbot non-stop and not have the trees run out, so you’re going to have to use your treebot to plant more trees to keep the cycle going.


Trophy-wise, this is a game with a full trophy list with a Platinum trophy for you, but it’s not going to be an easy one! There are several trophies tied to completing the missions in the Campaign Mode, but you’ll have to do this while also obtaining a gold medal! The other trophies are tied to completing the challenges with a bronze, silver, or gold medal, so you’re going to have to get good if you want to add that new Platinum to your collection! 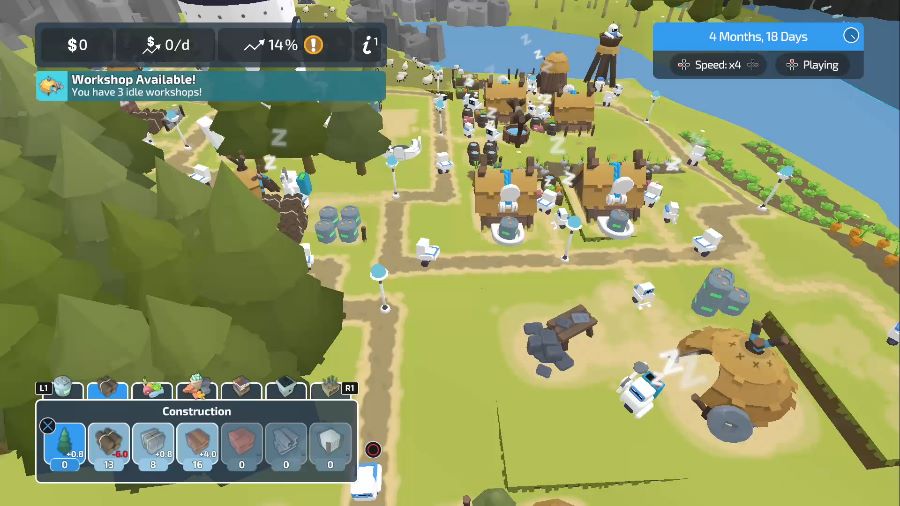 The Colonists is a fun resource management city building sim on PS4 that you can play at your own pace. You can completely stop everything to take a deep breath and reevaluate how you’re doing before you can correct any mistakes before you speed things up again. The game’s Campaign Mode is even split into two paths so that you can take on one that is more peaceful, with the other one having you fight it out against AI opponents. The Colonists is out on PlayStation 4 with a $27.29 asking price.

Disclaimer
This The Colonists review is based on a PlayStation 4 copy provided by Auroch Digital.

[PS4] Buildings Have Feelings Too! Review