The story-based adventure with elements of strategy and roguelike in set of fantasy world. The ancient order of mages Viates and their immortal Chancellor will fight against upcoming destructions and Chaos. Looking for the cause of imminent havoc the new ruler of magical city will face difficult choices, gain experience and knowledge, travel to distant worlds in order to find answers. Discover if Mittelborg has a chance of survival?

Mittelborg governs the balance of power in the universe. It’s a city of Mages ruled by a great Chancellor, and the Chancellor’s role is to guard and protect the Tree of Order that is responsible for the life of everything. Since the throne was vacant, the Tree of Order has chosen you to become the new Chancellor, in hopes of fulfilling a prophecy about a commoner that will become Chancellor to save the city from oblivion.


There are two main modes while playing the game. When in serenity, you are able to do the resource management aspect of the game. At first, you only have one building to manage, but eventually, you’ll gain access to more as you play. The main buildings are the Garrison, where mages can defend from raids, and the Tower of Light to protect from magical damage. Those two, and the other ones you’ll gain access to, can be upgraded by spending Aether on them, the game’s resource. Aether is automatically gathered after each turn, or when you have mages in the Wind Catcher, another building you can manage. 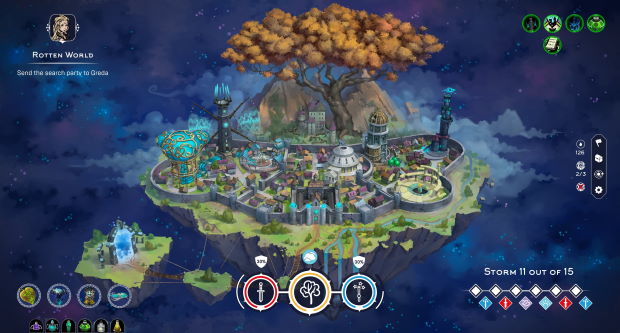 When you’re not in serenity, you’re in a Tempest. The first thing to know is that during Tempests, you can’t upgrade your buildings, as you are basically at war against attackers. There are four different tempests; a red one has one attack against your Garrison, a blue one has at least one Barrage against your Tower of Light, a purple one has at least one Breeze where you can gain additional Aether by going at the Wind Catcher, and yellow is for the Lull which allows you to send mages into a portal. With that being said, each Tempest has multiple rounds, and some of them you don’t know what type of attack (or not) it will be unless you spend Aether to find out.


So before each turn of a tempest, your goal is to move your Mages to the building that corresponds to what is coming in order to either protect the city from attacks or to gain things like Aether. For example, if the next turn is red for a raid, you should move your mages to the Garrison to provide additional protection. In case of the attacks, mages will reduce the damage the building receives. If the building doesn’t have hit points anymore, the Tree of Order will take the damage. If its HP falls to zero, you’ll have to start back from the first Tempest, and you’ll lose all your upgrades. From there, though, you’ll gain access to a counselor that can provide additional perks, like decreased raid damage, for example, if you have fulfilled the requirements of those perks.

Visually, the game is rather simple and doesn’t have anything stellar to it. You see the image of the city, with the buildings you can go and highlight with your cursor, and that’s pretty much it. You have an overlay menu when you want to upgrade your buildings, but nothing more. Some of those menus also lack a bit of explanation, which made them a bit irritating. For example, at one point, my objective was to use a building to summon an additional mage to the city, but nothing explained to me how to do it. After a good 15 minutes of trying to understand what to do, I finally figured it out by pressing a button by mistake! 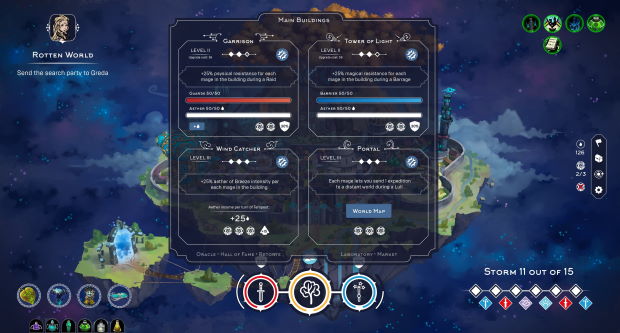 I wasn’t too sure what kind of game to expect when I started the game, and to be honest, I’m still not sure. The game clearly lacks in terms of story to really make it interesting. You get bits of text to make it evolve here and there, but it’s clearly not a selling point. The resource management of your buildings, coupled with how you have to do your best to optimize where you put your mages, is fun but lacks some depth. There are some moments where you have strangers that come to town where you have to pick an action, which can result in good or bad things, but it’s the only thing that differs from the regular gameplay.


Yet with that being said, every time I died, I kept going back for another run. The roguelike aspect of the game is probably what makes it addictive, and after a couple of rounds, when you’ve learned the mechanics, it does become more fun than when you start.

For the trophies, you shouldn’t find yourself in front of a difficult Platinum to get. If you keep playing the game and get better at it, you’ll naturally gain all the trophies. There might be a few tricky trophies that require you to max out three specific buildings before the 12th Tempest, but I clearly don’t see them as an impossible challenge. 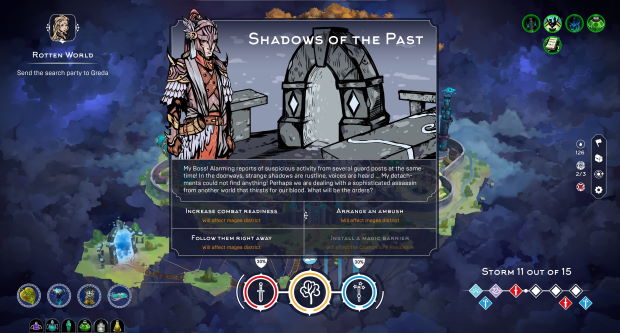 Mittelborg: City of Mages has an interesting concept but at the same time lacks what makes those kinds of games truly addictive. It’s a slow burner of a game that won’t appeal to everyone, but if you dig deeper, you’ll find something like in this roguelike experience.

Disclaimer
This Mittelborg: City of Mages review is based on a PlayStation 4 copy provided by http://armaturgames.com/.