From the worldly desires of humankind, delusions are born. These delusions, whether from the living or the dead, manifest as toxic creatures known as Kleshas, and bring into being the realms of hell.

The first few minutes of the game explain the situation: you were there, minding your own business, when a Klesha – a strange creature – attacks you. As you’re wounded, you faint and wake up in hell – realizing that the wound you received was fatal. As you can imagine, you’re not too happy to have died, and your ultimate goal will be to find a way out of there and get back in the world of the living.

You’ll then learn that the Klesha that initially killed you is now stuck with you, literally – she’s only a few inches tall and now requires your help to get through hell herself. Thus will begin a quest with your new friend – Poisonette – in order to free the hell from its Poison, hence the game’s title.

As you’ll begin to play at different levels, you’ll notice that the gameplay is confusing at first, and there aren’t many tutorials to help you start. Essentially, each level is the bad thoughts of a Belle – a girl -. In each level, you’ll have to get rid of the few Kleshas (monsters) that are there, which cleansing the poison with your Poisonette. In most levels, monsters will be constantly emerging from the poison as soon as enough is cleansed. You also do not have much room for error because if a Klesha charges you, most of them can drain MORE than half your energy in a single hit, and I thought that this game was on the hard side at first but as you progress the difficulty tones down. 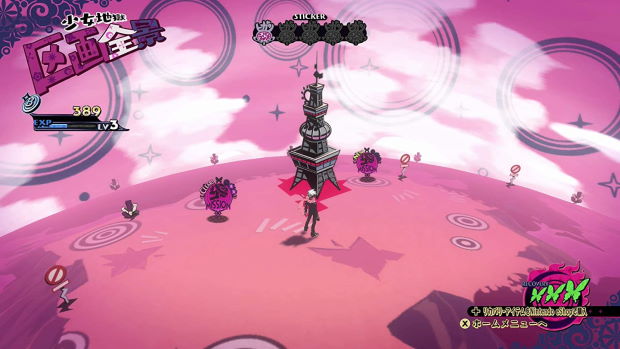 As I progressed through the different levels of the Belles in this world, I noticed that each one was similar to Persona’s 5 cognitive palaces -albeit on a much smaller scale-. In fact, although the two games are vastly different, I think the Persona’5 memento might have been an inspiration for this game. Each level is the distorted mind of a different Belle and they are well designed although they do feel generic in the long run.

There’s also a story between the different characters you’ll meet outside the dungeons, which are like you – a human being with a Poisonette, and also having the same goal as you which is to be the first to get back to the world of the living. The characters are lovely and I thought that their interactions are funny.

There are also Heart-to-Heart sequences that happen quite a few times in the story and are when you can talk freely in one-on-one with your Poisonette as she’ll progressively open up to you. Depending on your answers when you’re offered the choice of replying, you’ll raise her in-dungeon stats. 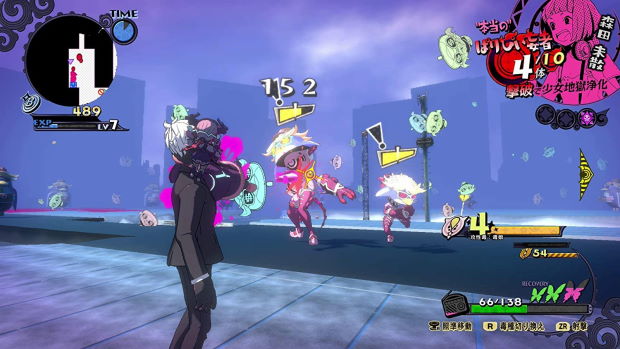 With all that being said, there was one decision in this game that I had a hard time getting used to it even as I progressed further: ammo management. You begin with a shooting weapon having a puny amount of bullets (more unlocks as you progress), and it does take forever to reload it once it is empty. Since enemies are often pouring out of the poison, constantly waiting for your weapon to reload wasn’t fun, and made the game more difficult than it should be. Some enemies are even stronger than a complete ammo clip, so you can imagine how uncomfortable this is. When you progress, you’ll get more weapons that can be used at the same time, so you can use one while the other is reloading, but you’ll most likely reach a point where both are reloading anyway. As the last mention on this matter, the weapon will only auto-reload when the clip is empty. It honestly would have been miles better if it could auto-reload automatically when we are walking, instead of leaving me meet up with a new horde of enemies with a single bullet. This issue almost broke the experience for me, when I noticed that weapons can be upgraded in the main hub in the “Loadout” menu, which is another aspect that isn’t explained in the game.

I also encountered a pretty disturbing bug when I was fighting the first boss. The combat was actually fun, but when I had completed draining his HP, he stopped moving and became immune to my hits. He continued to attack me, but there was nothing I could do. After a few moments, I left the level and redid it completely again (which was really annoying), and when I met him the second time he died normally when I depleted all of his HP.


As for Poison Control’s presentation, I was genuinely impressed by its unique art style which stands out from other releases. The overlay and text boxes are very well designed. The background soundtrack also has a few pretty catchy dungeon themes. The game runs at 60 frames per second normally, but I’ve seen it hang frequently when there are more monsters on screen.

Finally, there’s a full Trophy list in this game which can net you 18 bronze trophies, 11 silver, 5 gold, and a new Platinum. The game doesn’t seem like it would be particularly difficult to achieve the Platinum, and can be achieved in roughly 15 hours. Here’s a Poison Control Platinum guide that can help you. 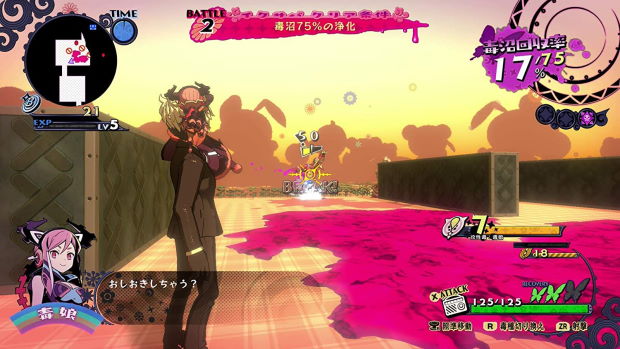 Poison Control is a great surprise, with its killer interface, and great gameplay: I had fun with it. I did have a hard time figuring out the game at first since there are no tutorials and I did have a gripe against the ammo management, but this shouldn’t ward you off from an otherwise great game.

Disclaimer
This Poison Control review is based on a PlayStation 4 code provided by Modus Games.