Take on colorful dungeon crawler Going Under from Aggro Crab Games and Team17 about an unpaid intern in dystopian Neo Cascadia. Check our Going Under review!


In Going Under from Team17 and Aggro Crab Games, you’ll be taking on a colorful dungeon crawler starring Jacqueline, an unpaid intern in the dystopian city of Neo Cascadia. Your task will be to wield office junk as weapons to try and beat the procedurally generated dungeons that exist below your company campus. In this future, failed businesses no longer cease to exist. Instead, they are swallowed underground, with their employees cursed to wander the halls forever as monsters. You must put them out of their misery and repossess all of their assets and will be paid for your efforts in the greatest currency of them all: experience! 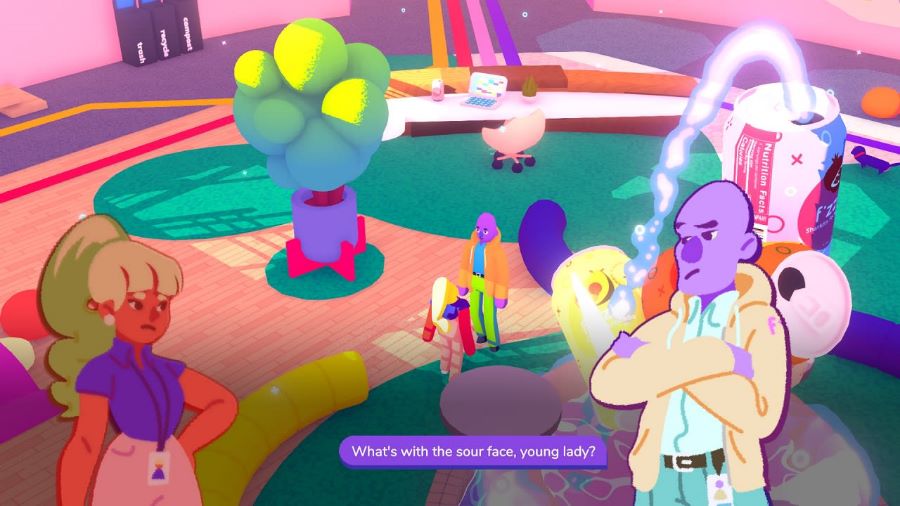 Cubicle started as a couple of guys in a garage, with nothing more than a dream. After hitting it big, the company realized that it had to the right thing and paid it forward, so they began to help a ton of startups to try and make it in this new world. You’ll be working as an intern at Fizzle Beverage, one of the successful startups. Your first-day onboarding is interrupted by a monster who has managed to escape from the basement. Since people can’t just have a normal meeting with a monster running around, you’ll have to take care of things!


Going Under is not going to be an easy experience since it will be testing your skills every step of the way. The team at Aggro Crab Games understands that not every gamer out there is looking for the hardest and most punishing experience on PlayStation 4, so they offer you the chance to activate some assist options to make the whole experience a bit easier. Thanks to this, you can add extra hearts so that you can take more damage, increase weapon durability, add a longer invincibility window to your character after taking damage, give your character an extra invincibility window when rolling, or lower the health points of your enemies. You can select to activate some or all of these assist options. 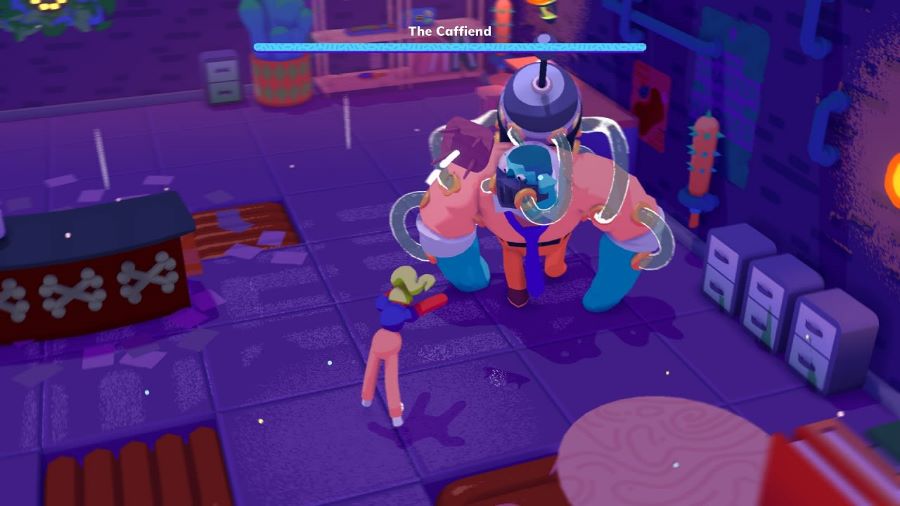 You’ll walk and run around with the left analog stick, adjusting the camera with the right one. You can attack with the Square button and can charge up your attack by pressing and holding it down for a bit. Press the Triangle button to interact with items and pick them up, and drop them by pressing and holding down the button. Be sure to dodge incoming attacks with the X button so that you can then counterattack as you focus on this or that enemy. Sometimes it might be best to just throw the item in your hands to buy you some extra time!

Pretty much everything you find during your time with Going Under can be used as a weapon. You’ll find laptops, monitors, pencils, swords, brooms, body pillows, stools, a crossbow, boxes, a stapler, a dolly, a bone club, a big pottle succulent, a tablet pen, a pencil, chairs, a marker sword, a wastebasket, a felix cube, and more! You can also use the money you collect from defeating all the enemies you battle so that you can purchase some food to keep your health as full as possible, or even purchase new weapons or skills! 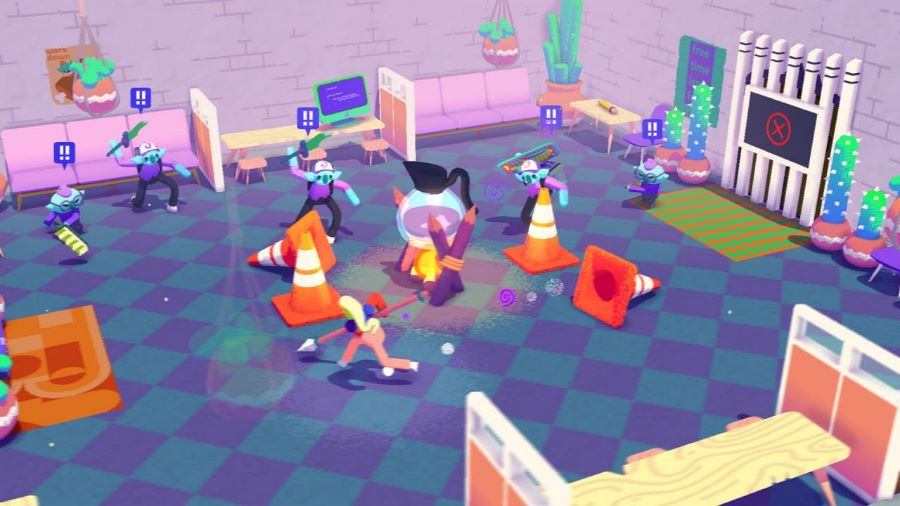 If you want to stay alive, you’re going to have to make the most of the skills you can find and equip, as well as complete as many tasks as possible from the mentors you’ll meet. You can pin a mentor and a skill to use in a dungeon, and the more tasks you complete for each of the different mentors, the more skills you’ll have at your disposal! You could collect Room for Growth, which adds an extra empty heart to your health points total, Disruptive, which makes your critical hits electrocute enemies, Retaliatory, which briefly doubles your damage after being hit, or Intimidating, which adds a chance to knock down enemies when you enter a room, to name some examples.


You can also find special doors with fangs on them that will lead you down into rooms where you can get some fabulous items! You can accept a specific curse in exchange for getting whatever is behind the big fancy car in the room. These curses could, for example, include the Curse of Void Warranty, which for the next three battles, will make it so that all of your items are cheap knockoffs. Is it going to be worth it? Well, you could find a couple of skills and a sturdy briefcase behind the car, so who knows! Do know there’s a trophy attached to obtaining 13 curses during your time with Going Under, so be ready for it! 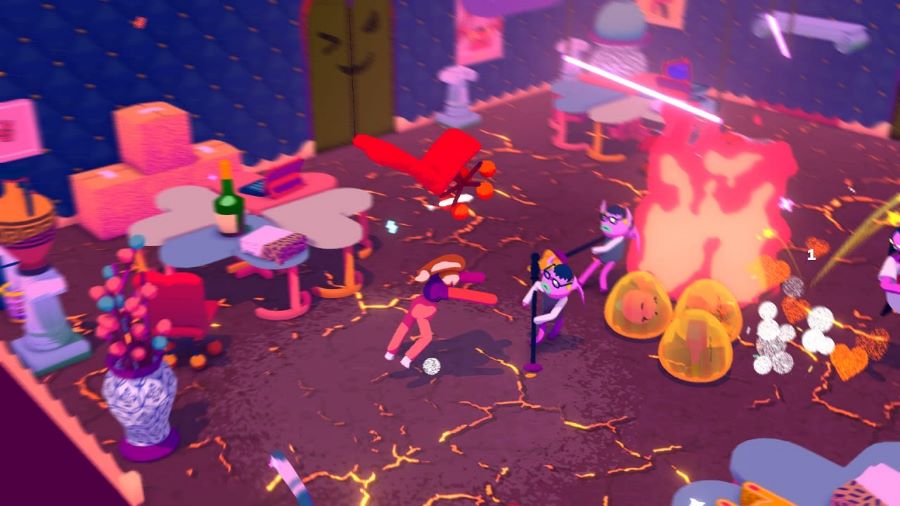 As you explore each of the dungeons you’ll unlock, you’ll get a chance to earn Cubits for your efforts. Cubits are tokens given to you for your interning activities, and they can be traded at the Fizzle Beverage lobby to unlock more skills so that they can be added to the potential collectibles you can find during your subsequent trips down into a dungeon. This is also needed if you want to Platinum the game since there’s a trophy that requires that you unlock every single skill in the game, which is done by way of Cubits.

Speaking of trophies, since Going Under has a full trophy list with a Platinum waiting for you, you can expect to play this one for well over 10 hours, depending on how good you are at roguelike procedurally generated dungeon crawlers. It’s not a very long list since, along with the aforementioned trophy for unlocking all skills, you’ll also have to complete all tasks from each of the mentors, open 100 delivery cubes, defeat a hungry box – a mimic for those of you with some D&D experience -, as well as beat the game.

The Work From Home update, which launched on Steam and the Epic Store in January, is now also available on PlayStation 4. Since a big chunk of the world has been doing a ton of their work from their homes, this new update pays homage to that by bringing a ton of extra content to enjoy! There are new locations to visit and outfits to find, new abilities, new curses, new items, and more! There are even two new modes for you to try out. In Overtime Mode, you can take on all dungeons strung together with new difficulty settings, double damage, and remixing enemy placement. And then, there’s Impostor Mode. 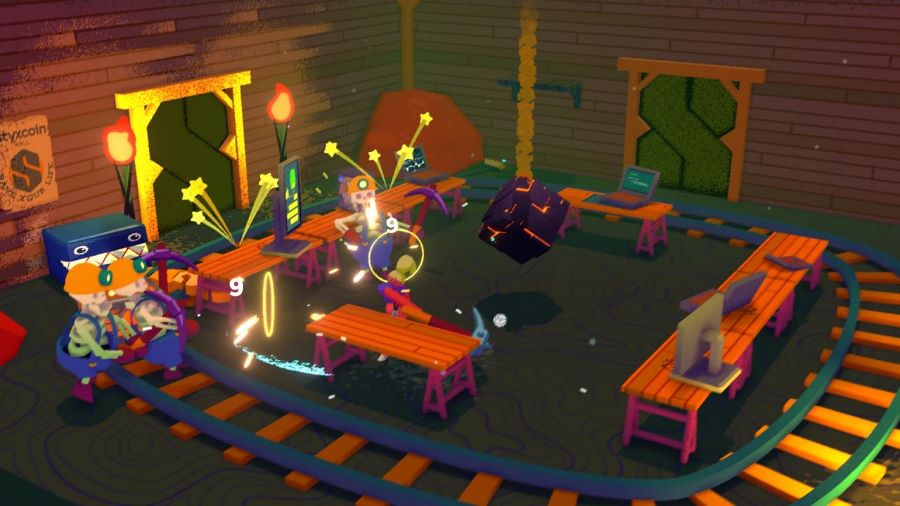 I’ve been having a lot of fun with Going Under, thanks to its easy-to-understand gameplay mechanics and a steady difficulty curve that does not make the roguelike cycle feel overwhelming. You’ll be making some progress with every run, collecting Cubits for unlocking new skills, mastering them by collecting and activating them during dungeon runs, completing the tasks that your mentors give you. The Work From Home update has made the game even bigger and better, so you should definitely check it out on PlayStation 4 with its $19.99 asking price.

Disclaimer
This Going Under review is based on a PlayStation 4 copy provided by Team17.