Taxi Chaos from developer Team6 Game Studios and publisher Lion Castle Entertainment is an arcade-style driving game that pays homage to the classics. Learn more in our Taxi Chaos review!


In Taxi Chaos from publisher Lion Castle Entertainment and developer Team6 Game Studio, you’ll be taking on an arcade-style driving game that pays homage to the beloved Crazy Taxi from Sega, as well as to other games that have offered a similar experience over the years. The gameplay loop is simple and to the point: pick up customers as you drive around the city – clearly marked with a circle around them – take them to their destination, and stop your car at the designated drop-off to collect your money. The faster you are, the more money you’ll earn. Just follow the arrow that will point you in the general direction of your destination, and you’ll be good to go! 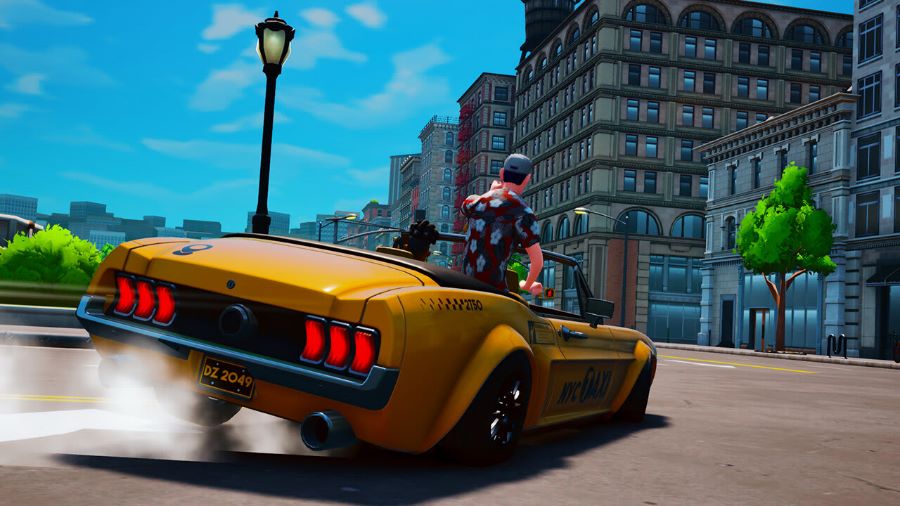 When you start the game, you’ll only have access to the Arcade Mode and to Freeroam, with a Pro Mode locked until you manage to get a total rating of at least four stars during a run. You’ll be able to pick between two drivers – Vinny and Cleo – as you get the show on the road. You’ll only have one car unlocked – King Vic – which has average speed, acceleration, braking, weight, and boost. As you spend more and more time with Taxi Chaos, you’ll get to unlock better cars, which will improve your overall performance.


You’ll be driving around New Yellow City without a map, so the more time you spend with Taxi Chaos, the easier it will be to learn its different landmarks so that you can get better at the whole taxi driving situation. There will be regular clients to drive around, but you’ll also meet special customers that will have a storyline for you to complete! On top of this, there are secret items hidden around the city tied to each special customer. These items will act as the game’s collectibles. You can track your progress in the Collectables tap under the Trophies section in the game. 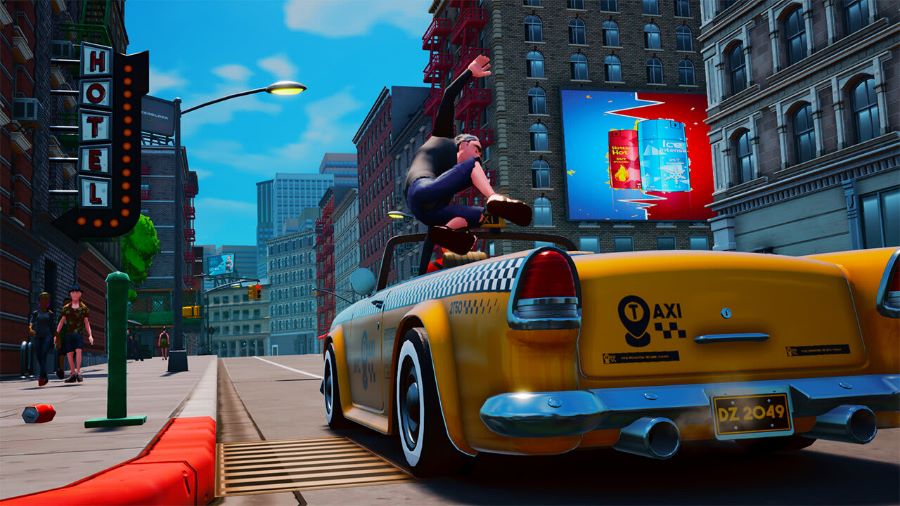 You’ll steer your taxi with the left analog stick, accelerating with the R2 button and hitting the brakes with the L2 button. You can charge up your boost after picking up a passenger by pressing and holding down the L2 and R2 buttons, releasing the L2 button once you start to see sparks flying out of the car. You can also make your car jump by pressing the X button, which is a great way to overcome traffic, or find a shortcut that can help you deliver your current customer to its destination as fast as possible.


This is very important because you’ll be on a timer to try and drive around as many customers as you can before time is up. Speaking of time, there’s another timer you’ll need to keep your eyes on: your customer’s timer! As soon as a customer hops into the car, the timer will start to count down to zero. If it runs out, the customer will jump out of the car, and you won’t get paid. To give you an extra visual cue, you’ll notice the timer will also have a gauge around it that will go from green to yellow to red as that customer’s time is about to run out. Every time you pick up a passenger, you’ll get some extra seconds added to your timer, so if you manage to string a couple of customers with nearby drop-off spots, you can keep your run going. 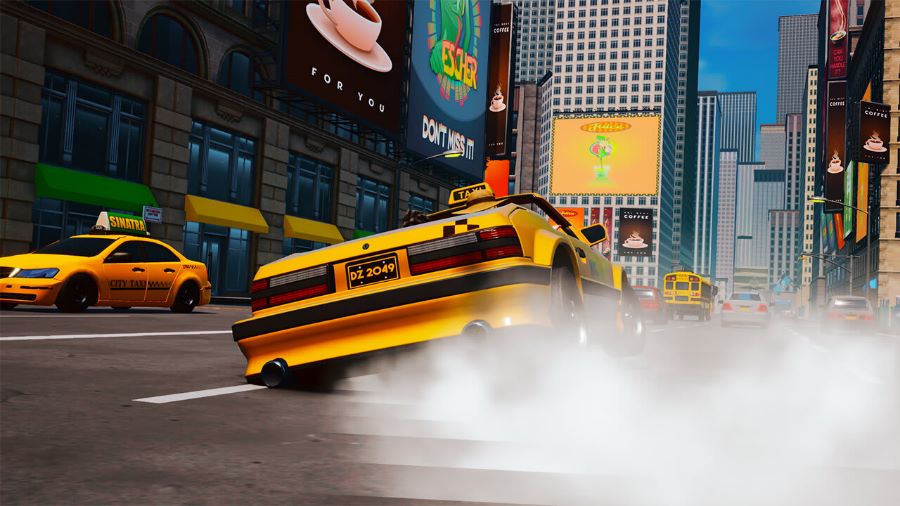 With this one being a digital and retail release, Taxi Chaos includes a full trophy list for you to work on so that you can add a new Platinum trophy to your collection. The trophies will pop as you play the Arcade Mode on your path towards unlocking Pro Mode, which, as I mentioned before, happens when you get a four-star rating during a run. There are also trophies for getting a three-star rating and a five-star rating, which is harder to do since in Pro Mode, there is no arrow pointing you in the right direction, so you’ll need to learn where everything is. A handful of trophies will unlock for completing some miscellaneous objectives, but the bulk of them will pop as you unlock new cars and complete the storylines for special characters. 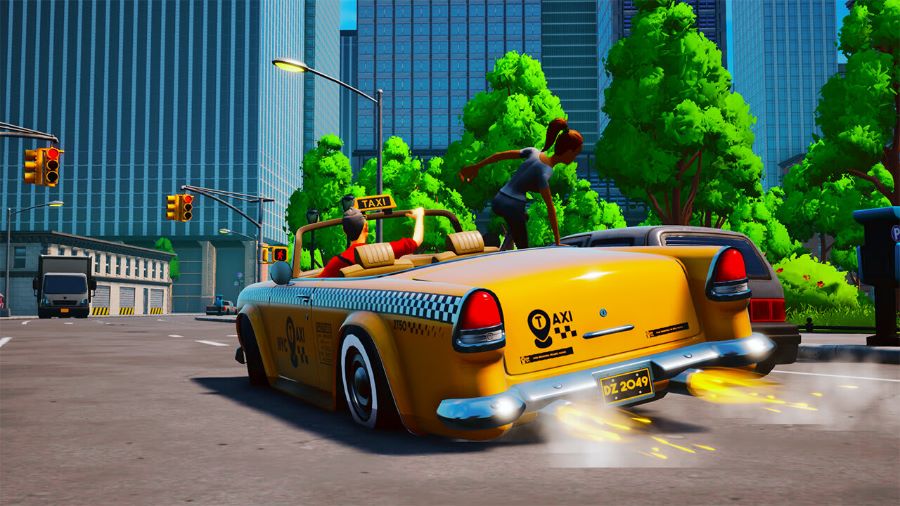 Taxi Chaos is a colorful and charming arcade-style game that is fun to play on Sony’s console. You can play this one in short burst or enjoy longer gaming sessions depending on how much time you have, slowly but surely making progress as you unlock new cars, learn the overall layout of the city, and find the shortcuts that can help you cut down some valuable seconds for each passenger. I did notice that sometimes the arrow that points you towards your destination sent me one way when taking another street would have been faster, but it wasn’t a deal-breaker. The game does not have a proper tutorial, which could help with onboarding gamers who haven’t played this type of arcade-style experience. Adding a segment that is a couple of minutes long and shows you the basics would go a long way. Taxi Chaos is out on PlayStation 4 digitally and physically with a $39.99 asking price.

Disclaimer
This Taxi Chaos review is based on a PlayStation 4 copy provided by Lion Castle Entertainment.