Spooky Chase from QUByte and Burning Goat Studio is a 2D arcade-style platformer with bite-sized stages. Learn more in our Spooky Chase review!


Spooky Chase from QUByte Interactive and Burning Goat Studio is a 2D arcade-style platformer with bite-sized stages. It’s Halloween night in Little Town, and you’re about to participate in a race to try and collect the most flags so that you can win the prize: a giant pile of candy! Do you have what it takes to outrun every other kid in town to win the big stash of candy? There’s the main Campaign Mode, with levels split into themed areas, as well as an Endless Mode. The levels in campaign mode will always be the same, while in Endless Mode, you’ll take on any of the stages you’ve unlocked in Campaign Mode, as you try to collect as many flags as possible before you’re defeated. You can replay each stage over and over again in an effort to improve your overall score. There’s also a multiplayer Survival Mode, in which players take turns creating enemies as they move around the stage, and the last one standing wins! 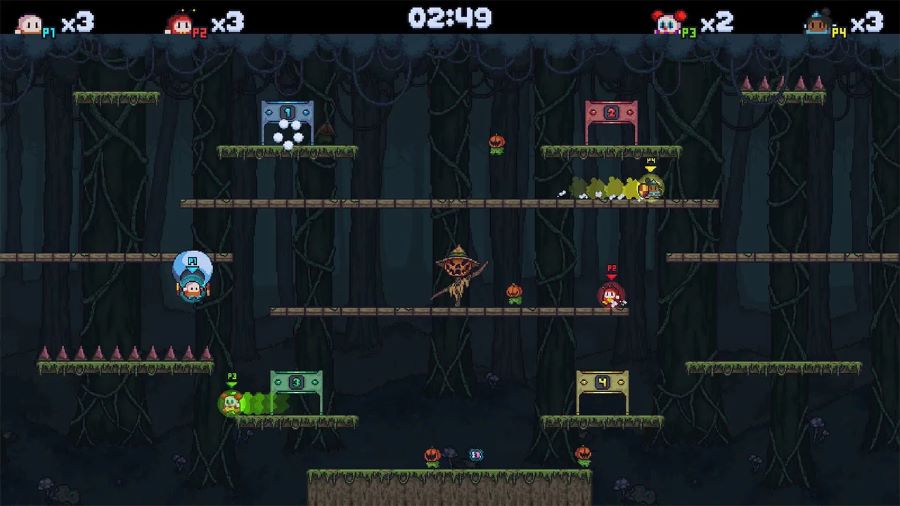 As you play Spooky Chase, all you will have to worry about is moving your character with the left analog stick or the D-Pad, sprinting with the Square button – once you unlock the sprint shoes. Once you start to move, you won’t stop and can only swap directions by pressing another direction. What you need to keep in mind is that for every flag you collect, an enemy will spawn! On top of this, each enemy will repeat the actions you’ve just performed, so you’ll need to be careful so that you can try and stay one step ahead of things so that you can outsmart your opponents. Later on, you can unlock an old cloth, which you can use to glide down at a slower pace after you jump with the X button and press and hold the button again.


Your opponents will remain in this loop, and your only two options will be to avoid them as you try to remember which paths you’ve taken for each flag you collect or jumping on their heads to defeat them for a bit. This will come in handy when there’s a handful of opponents running and jumping all over the stage so that you can stay on top of things. Oh, and while you collect flags, don’t forget to collect the extra pieces of candy just waiting for you to grab them, as well as the golden balloon for the stage! 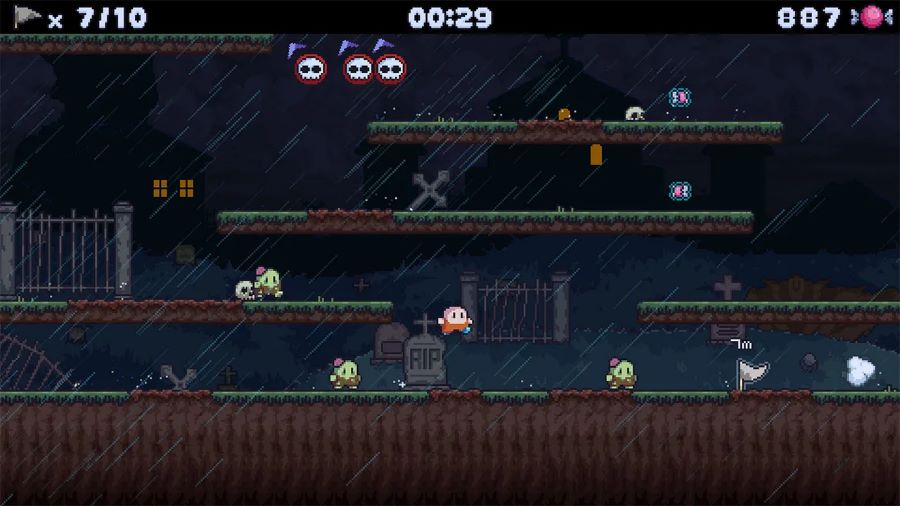 You’ll need to collect a specific number of flags through each of the levels in the game in order to be able to open the rest of them. You’ll know when a new area is ready for you when the game tells you that you’ve unlocked one. If a flag is new for your overall count, it will show up as red on a stage. If, on the other hand, you had previously collected that flag during a previous effort, it will show up as white. The last flag in a level will always be golden since it’s the game’s way of reminding you that you can also collect a golden balloon before you grab that last flag.


The many pieces of candy you grab – either by grabbing them on each flag run or as a reward for collecting a flag – can be used to unlock one of the 42 costumes you can use to customize the look of your character. There’s also an extra special costume that will unlock once you finish the game. And if you don’t know which costume to wear, just hit the random option to have the game decide for you! The golden balloons are also very special since they will be used to unlock additional stages for you to play. 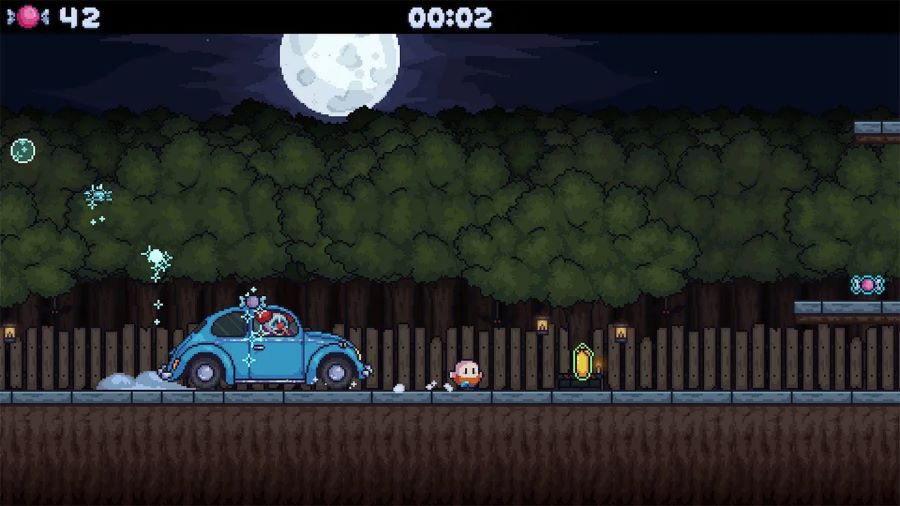 Every time you die and retry a stage, things will be slightly different. While the overall layout of a level will remain the same, the spot on which you start a level, where each piece of extra candy will be placed, and where each subsequent flag you must grab will be located will be a bit different. This means there’s also a bit of luck involved during your time with Spooky Chase because you could get lucky during one run and have the last three flags placed conveniently close to your starting position, or they could be on the other side of the level, with a handful of opponents already running and jumping all over the place.


Spooky Chase has a full trophy list with a Platinum trophy for you to add to your collection. Given the randomized nature of the game’s levels, you’ll be replaying each stage several times as you try to collect all flags in them while collecting the golden balloons. The first trophy you’ll probably get will be for dying once or perhaps for jumping on top of an enemy’s head. There are trophies for collecting all ten flags in each of the stages in each of the game’s section, for collecting the running shoes and the old cloth, for grabbing all golden balloons, and for delivering them back to Pongo, as well as a handful of miscellaneous trophies that will take some extra time to unlock. 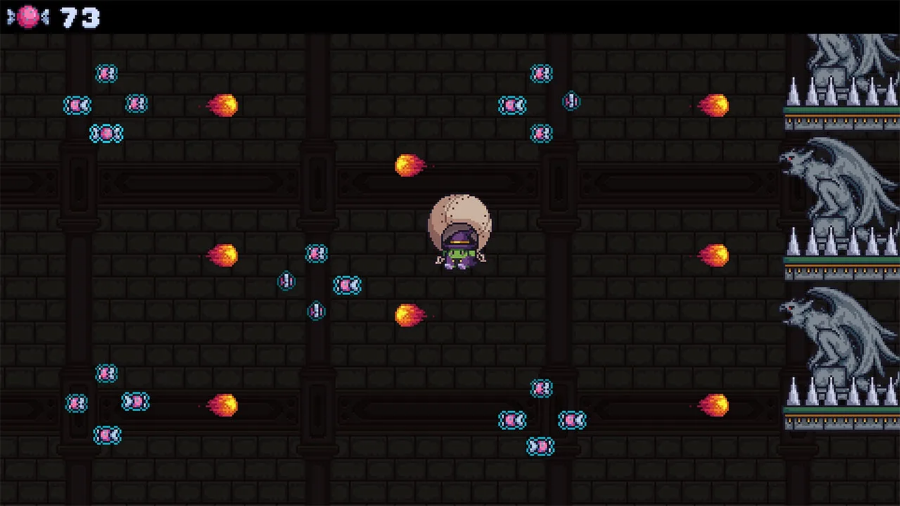 Spooky Chase is a 2D arcade-style platformer with bite-sized stages that is a lot of fun to play. It has an addictive gameplay loop that keeps you coming back to give it another go as you try to find the right combination of an easier layout for each subsequent flag in a level and being able to remember which paths you took for collecting the previous flags. It’s certainly not for everyone since frustration can quickly set in if you’re not making much progress. Spooky Chase is out on PlayStation 4 with a budget $4.99 asking price. 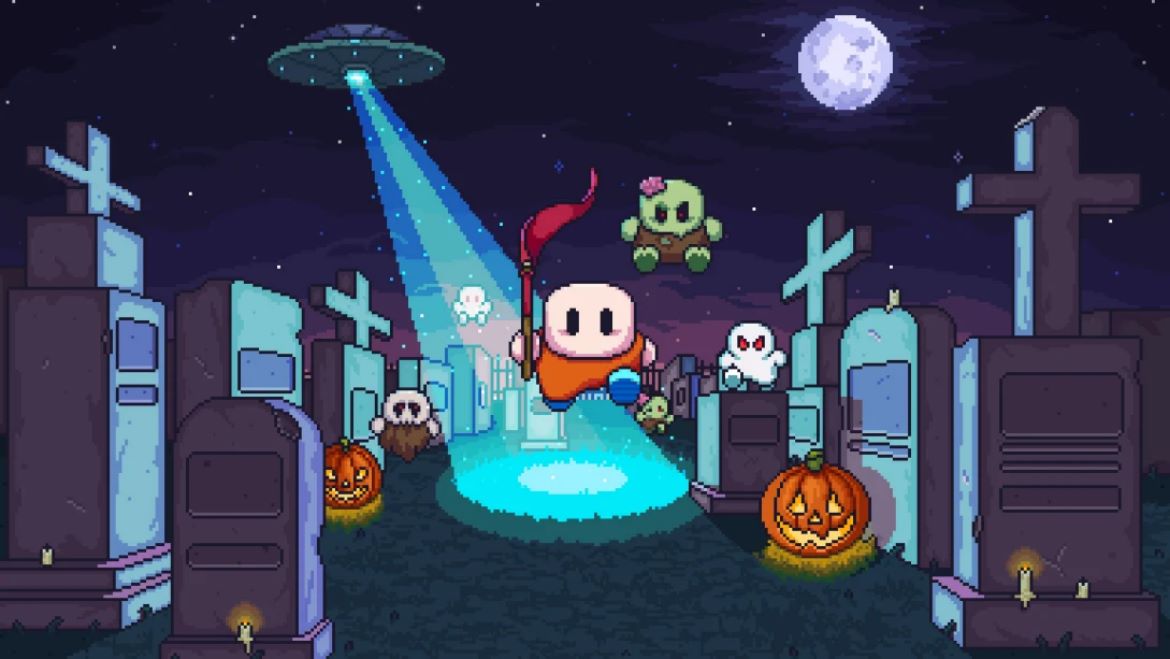 A fun and challenging 2D platformer with bite-sized stages

Disclaimer
This Spooky Chase review is based on a PlayStation 4 copy provided by QUByte Interactive.

I Saw Black Clouds Out Next Week