In Get-A-Grip Chip from studio Redstart Interactive you’ll be taking on a fun 2D platformer in which you’ll be grappling your way through an adventure in which you’ll have to save the lost Battery Bots in each of the stages you visit. After a terrible accident at the Roboco robot assembly factory, it’s up to Chip to save the day by using the many anchor points on its path so that you can build enough momentum to clear gaps, go over molten lava pools, avoid deadly buzzsaws, and keep Chip from being crushed by the many moving parts of the factory. 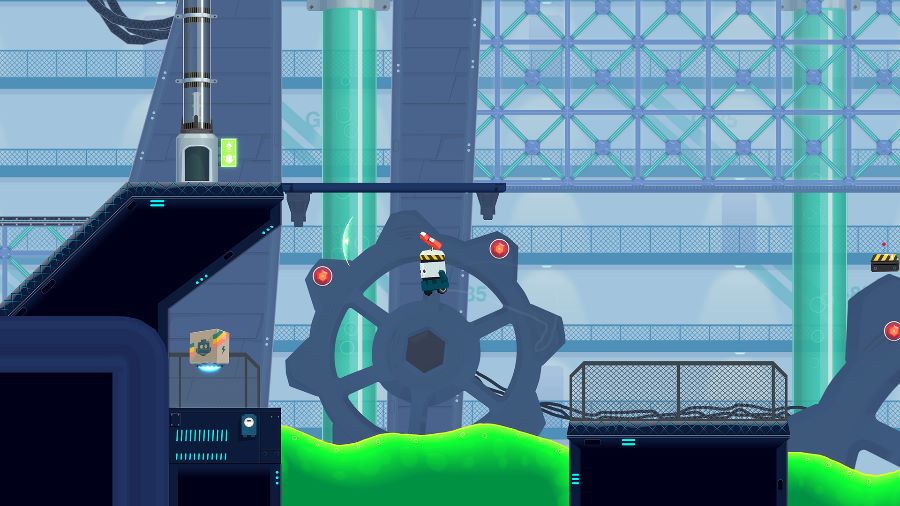 You’ll move the titular Chip character with the left analog stick, using the right one to aim vertically and horizontally as you press the R or ZR buttons to unleash your grapple to grab onto special bolts in each of the 30 levels that you’ll explore. Since Chip can’t jump, carefully aiming its magnet-like grapple will be a must so that you can avoid the many hazards on your path as you try to do something that would probably sound a lot easier for other 2D platformers you’ve played: get from point A to point B.


When you pick up a Battery Bot, you can see how many you’ve collected and how many are left for that level. You will need to deposit them at the checkpoints you’ll find for each stage as you search high and low for any of the floating boxes with Battery Bots that might be hiding behind some of the scenery or inside an extra room here and there. At the end of a level, you will get to see if you managed to score any new records for your total time to complete the stage, for how many grapples you had, for how many times you died, and how many Battery Bots you collected. 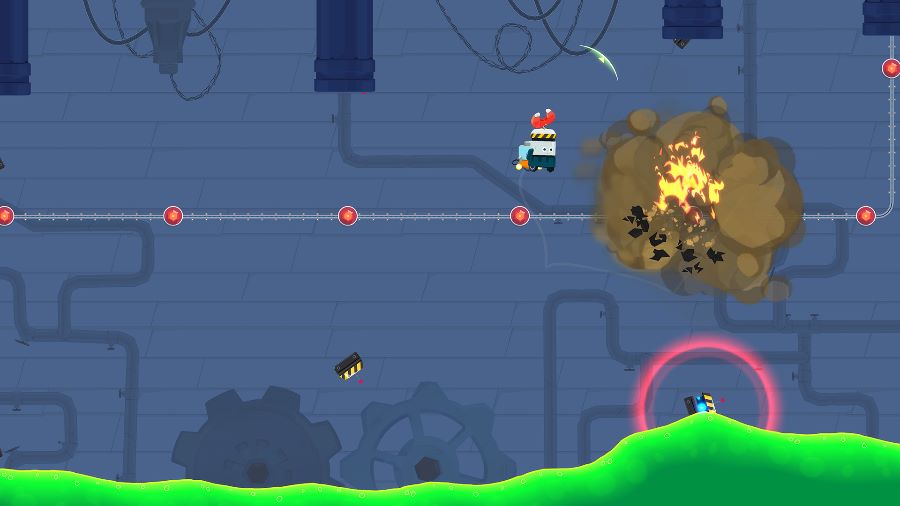 I really liked how the game would let me know my total time for the level I had just completed and would immediately display the leaderboard on the right side of the screen. If I had been fast enough, my name would pop up on the list in a handful of seconds as the console communicated with the servers to update in real-time. I have to be honest that getting the best time in each stage was a big drive for me to replay some of the stages in which I had taken a bit more extra time to look for the missing Battery Bots I had not collected, which will add some nice replay value for those of you who want to see their name in there.


The thirty stages in Get-A-Grip Chip are split into groups of six stages each, and I was pleasantly surprised when I got to the last stage of the first floor and saw how the malfunctioning robot from the initial cutscene popped up and shot at the back of the wall to unleash a torrent of molten metal coming my way! This completely changed how I had to approach that particular level since before I was able to take my time to land each subsequent grapple in a series so that I could stick the landing just right. For the last level of the floor, your window of opportunity to survive will be a lot tighter, so you’ll have to always be thinking one step ahead or else! 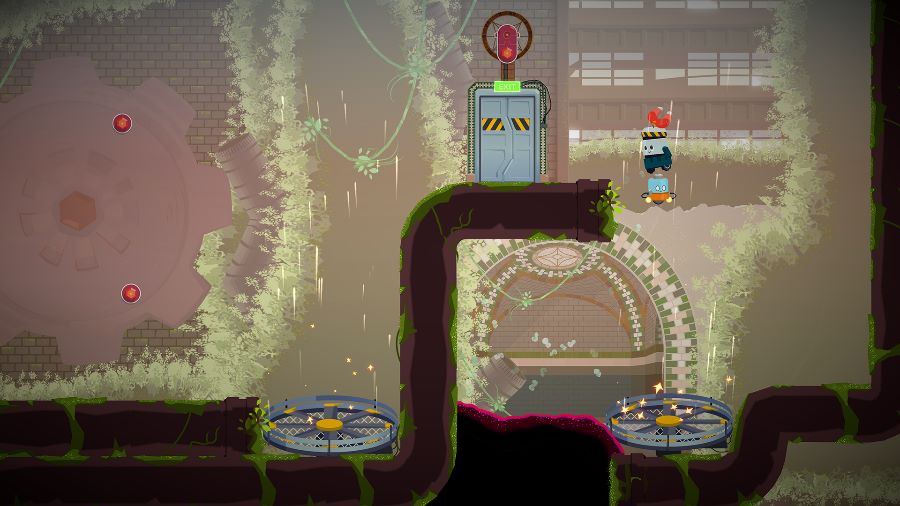 Get-A-Grip Chip includes an in-game achievements system with a variety of objects for you to complete. The first one is almost a freebie since it will pop as soon as you grapple your first bolt. As for the rest, there’s one for grappling 100 times without connecting to a bolt, rescuing your first Battery Bot, rescuing all the Battery Bots in any world, saving half of all Battery Bots, saving 90% of them, and then a last one for saving every last Battery Bot in the game. As for non-Battery Bot related objectives, there’s one for completing a level without dying, for dying 10 and 25 times in a single level, and for dying 100 times in total… which might get in the way of unlocking the achievements for completing all levels in the game without dying a single time. 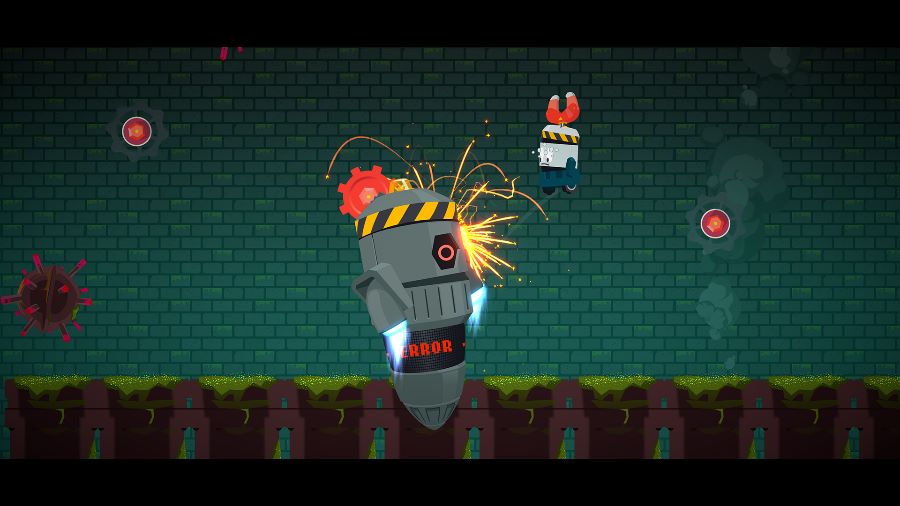 Get-A-Grip Chip from Redstart Interactive is a very fun 2D platformer with a steady difficulty curve. New elements will be added at a steady pace, with molten metal to avoid sharp spikes, burning-hot coal, deadly drones, and more. You can work on completing a long list of achievements, replaying levels to collect all missing Battery Bots, finding the best way to cut some valuable seconds from your total time for each level so that you can try to get your name on the leaderboards. Get-A-Grip Chip is out tomorrow on Nintendo Switch with a $14.99 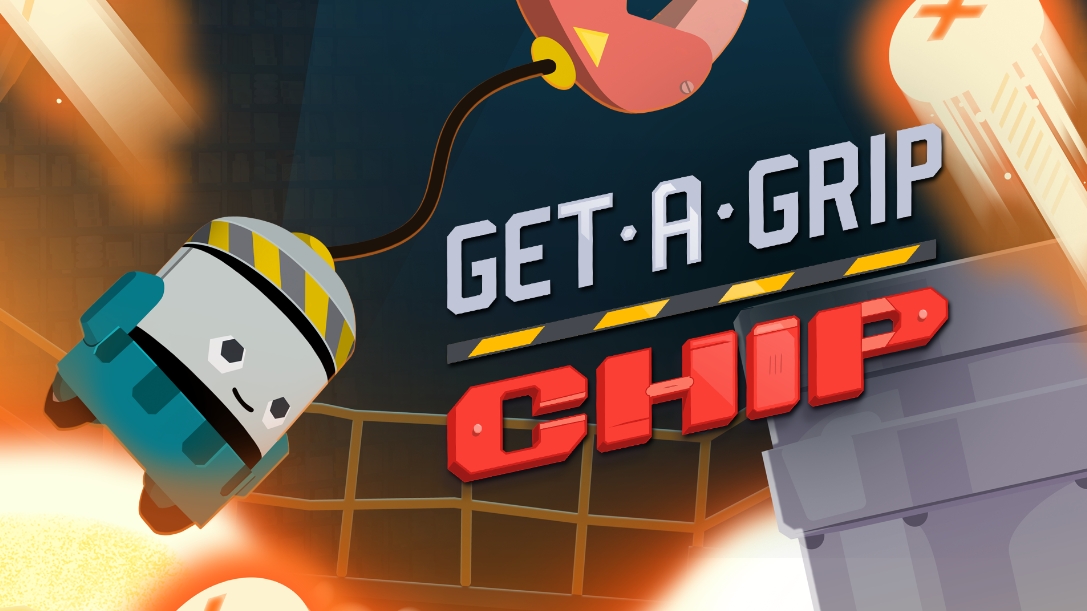 Disclaimer
This Get-A-Grip Chip review is based on a Nintendo Switch copy provided by Redstart Interactive.