In Cyanide & Happiness – Freakpocalypse from Serenity Forge, you’ll be experiencing a Rated M for Mature take on the beloved Cyanide & Happiness, available in comic and shorts forms, or by using the always handy random comic generator. The game is part of a planned trilogy, and for this first one, you’ll be playing as an outcast, a kid in school who is bullied by everyone – including the teachers! You must do whatever it takes to become the hero you’ve always wanted to be by helping out the people of Netherton. 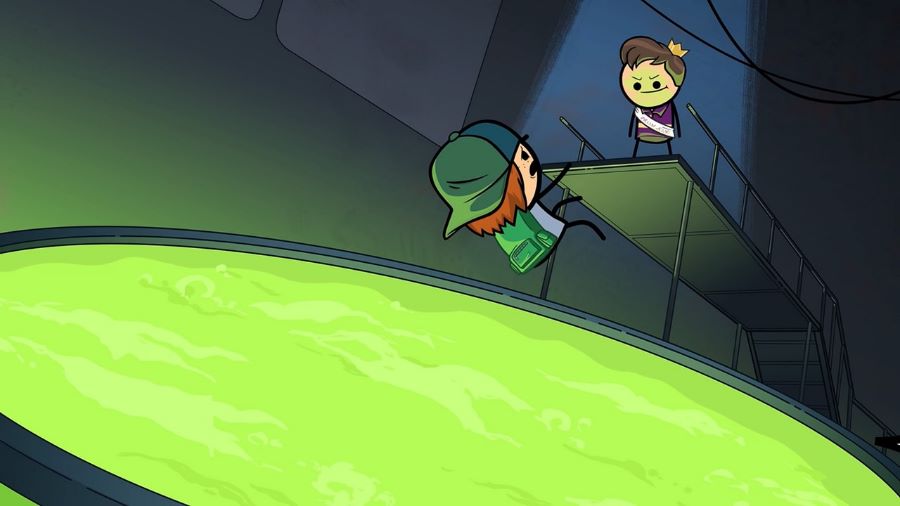 You’ll be taking on the role of reluctant hero Coop, who must navigate a bunch of terrible, not-good situations by pointing and clicking on everything around you. At the start of your adventure, you’ll be playing as Super Coop, who will be helped by Psionic PSteve to learn the basics of the game as you move around a post-apocalyptic version of the school where Coop studies. You’ll have to defeat Dr. Dropout by dropping some knowledge on him, and once you do this, you’ll realize that it was all Coop daydreaming.


At least the tutorial section will allow you to learn all of the basics! For Cyanide & Happiness – Freakpocalypse, you’ll use the left analog stick to move Coop around. You can switch between locations by walking through open doors or by using your cursor to click on closed doors to hopefully open them so that you can cross onto the other side. Since this is a point and click adventure, you’ll be moving a cursor on the screen with the right analog stick, interacting with things by pressing the A button.

First, you’ll notice your cursor shows up as a question mark when moving over something you can interact with. After pressing the A button, you’ll get to see which actions you can perform by then pressing the corresponding button. You can talk with others with the A button, touch something with the X button – and add it to the inventory if it can be collected-, look with the Y button, or use your brain with the B button – when said brain is available for potential interactions. You can use the right analog stick to search for some nearby interaction points or cycle between them with the ZL and ZR buttons. 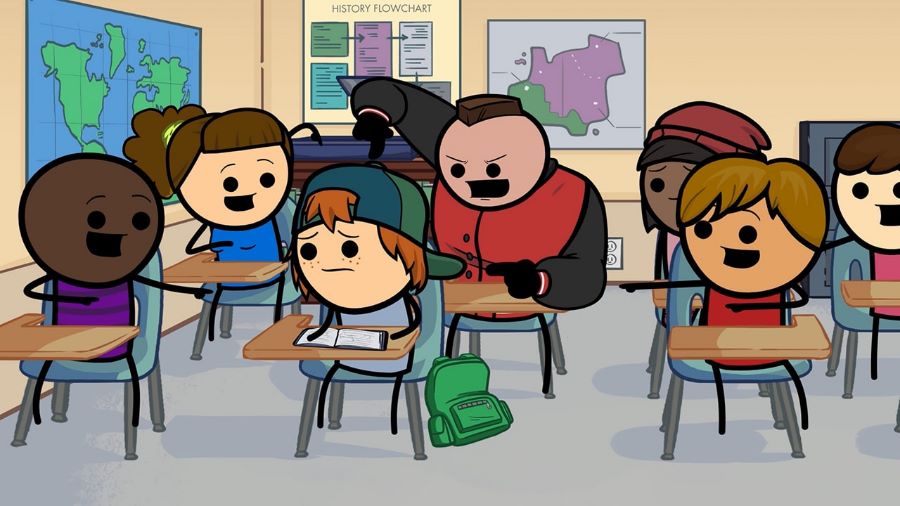 Coop’s backpack can be opened with the L button so that you can check what’s been added to your inventory. Whenever you get a new item, you will notice that the backpack icon will have a notification icon pop-up. Once inside your backpack, you can use the right analog stick to move the cursor over an item to select it with the A button. If you need to examine an item, you can do so with the Y button. As is usually the case with point and click adventure games, you can sometimes combine items by moving one item on top of another one and then pressing the A button. Items will need to be used on objects or characters in the areas you’ll explore in order to move the story forward.

If you ever feel a bit overwhelmed, you can press the + button to open up Coop’s notebook so that you can take a look at the Chores list, the Map, change Costumes, and even check the in-game Trophies. The Chores section will let you know what Coop is currently working on, as well as what he’s already completed. The Map will shop Coop’s current location, as well as the surrounding areas. If you want to play dress-up, you can change the way Coop looks based on the different getups you’ve found. 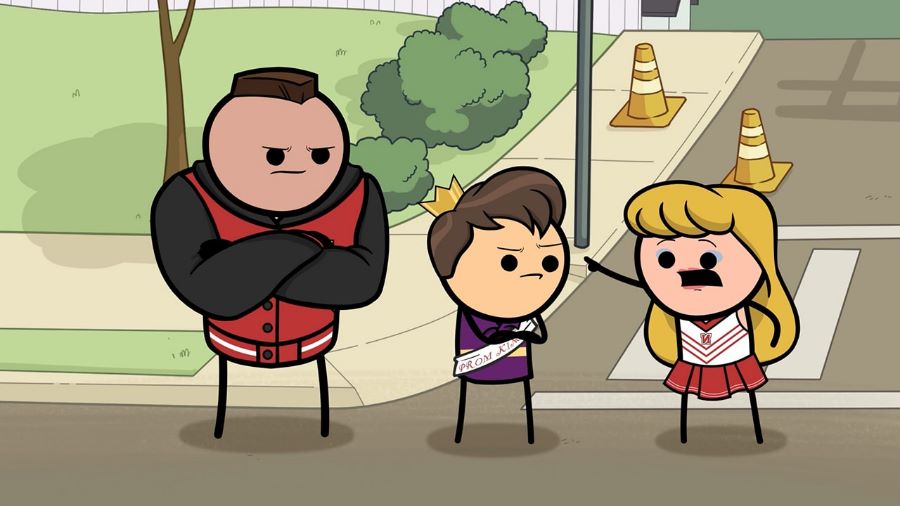 As for the type of puzzles you’re going to find, and as not to spoil things too much, I’ll talk about one specific puzzle early in the game. You’ll be called into the principal’s office because two of your classmates kept pushing you and pushing you until the teacher had enough. Once you get to the principal’s office – and after he’s made fun of you while also projecting onto you some of his past traumas – he’ll get a very convenient distracting phone call right before he leaves a mark on your permanent record. You have a short window of opportunity to fix things before it’s too late, so you’ll have to search for something in the principal’s office that will allow you to change your future. Perhaps some whiteout can get the job done?

The in-game Trophies include seven pages of objectives to complete, with names such as A Bushy Tale, Every Town has An Elm Street, Blue Brailles, Juvenile Delinquent, Ready For Rod, Your Lemons Suck, Distraction With Attraction, Get To Know Shark Dad, Burned by Bernie, and the aptly titled Participation Award, which will unlock when you fail to complete a simple test during class – because reasons. You will get a notice on the upper left corner of the screen when you obtain a new trophy, and you won’t know what needs to be done for a trophy to pop until you get each one. 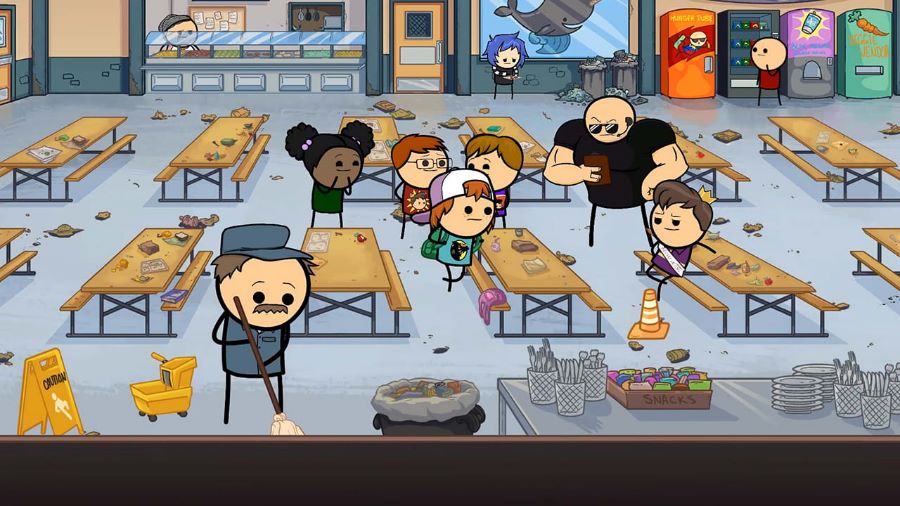 Cyanide & Happiness – Freakpocalypse is a short but fun point and click adventure game that fans of the Cyanide & Happiness universe are going to dig. You’re looking at around 4-5 hours or so to complete this one, with an extra hour on top if you’re the type of gamer that points and click on absolutely everything, which is a good chunk of gaming for this fully voice acted adventure on Nintendo Switch, which is available right now with a $19.99 asking price.

Disclaimer
This Cyanide & Happiness – Freakpocalypse review is based on a Nintendo Switch copy provided by Serenity Forge.