Crown Trick from NExT Studio and Team17 is a gorgeously animated roguelike dungeon crawling RPG on Nintendo Switch. Learn more in our Crown Trick review!


Crown Trick from NExT Studio and Team17 is a gorgeously animated roguelike dungeon crawling RPG that you should most certainly check out on Nintendo Switch. It stars Elle, a girl who finds herself in some sort of dream in which she encounters a talking crown that says it was fate that made her arrive there. That location, Nightmare Realm. Nightmares have brought forth disaster and chaos into Earth, and the planet is on the brink of destruction. Elle has been chosen as the hero that will save the world! It seems a human named Vlad is behind all of this after he performed a forbidden sacrificial ritual in the Nightmare Realm that is actually affecting both realms. 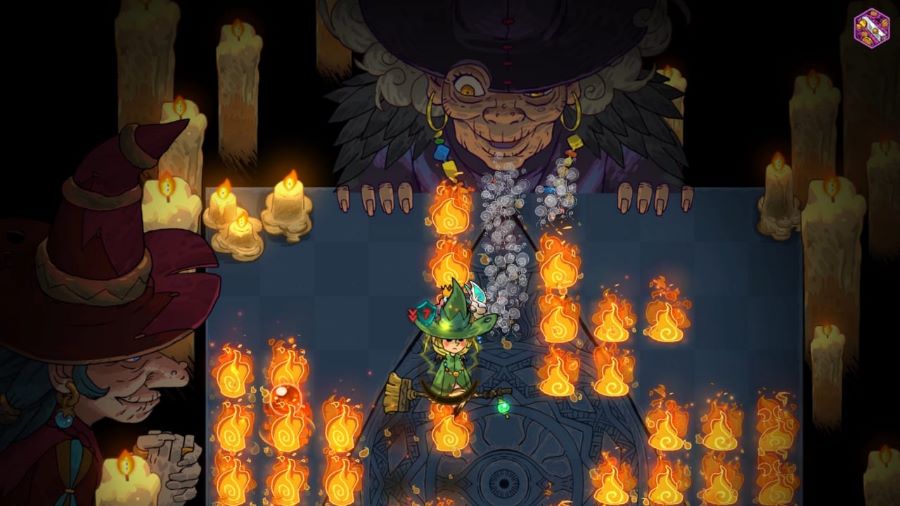 Crown Trick can be played at your own pace because enemies won’t move or attack until you move or attack. Thanks to this, you can take a moment to assess your current situation so that you can plan accordingly before you jump into action. Mapping out your route, using the environment to your favor, making the most of the elemental weaknesses of each enemy you face. There are many weapons, relics, and items to find during your journey, so you’ll certainly find something that can suit your playing style.

You’ll be able to move Elle with the left analog stick or the D-Pad, and you can use the right one to inspect the area around you so that you can plan your actions accordingly. Since this is a dungeon crawler, you’ll be able to use weapons and skills to defend yourself against the many enemies that will attack you. Your main attack will be set to the B button. Your skills will be mapped to the X and A buttons, and you’ll be able to switch between two skillsets by using the ZR button. Items are set to the R button. Since sometimes you might want to change your direction while remaining in place, you can do this by aiming with the right analog stick.


If you want to check the map for the dungeon floor you’re exploring, you can press in on the left analog stick. You can then use the map to choose a waypoint so that you can instantly teleport to it. Oh, and since it is definitely sometimes wiser to allow enemies to walk towards you so that you can lure them into a trap, or because you might need to skip a turn to have a contraption do its thing before you step forward so that you can remain unharmed, you can press in on the right analog stick to stay in place while having time around you flow.

There are some things you should know in order to take advantage of the many possibilities that Crown Trick has to offer. As you attack enemies, you will notice they have a shield icon on display. This is the enemy’s Break Point, which will be reduced by one point every time the enemy takes damage – or by more points if you flank it or attack it from behind. Once an opponent’s Break Point reaches zero, it will end up being stunned, making it also take more damage. Ellen will also have a Break Gauge that will full up with every enemy she Breaks, which will boost her attack. You need to be quick and continue to Break other enemies as soon as possible to keep the gauge going, or it will eventually reset after one too many actions. 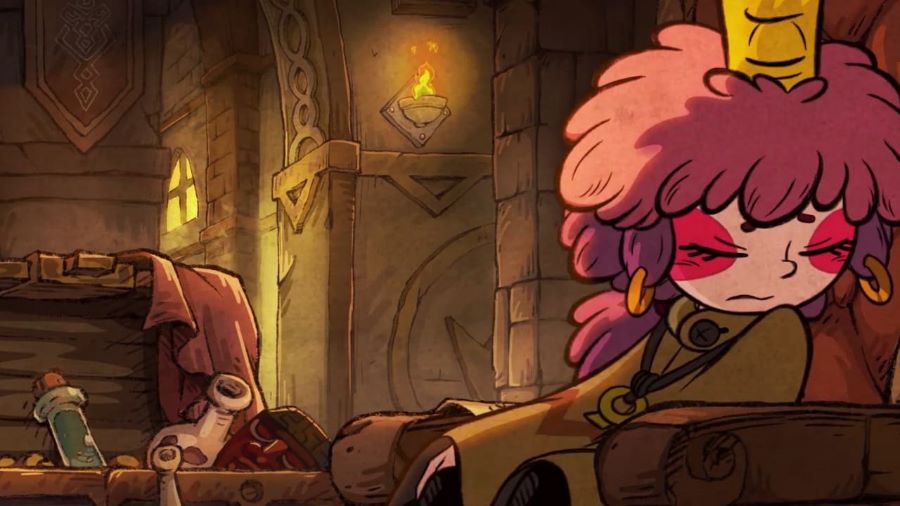 You can also use the Blink ability with the Y button, which will make it possible to teleport over a short distance without using any turns, which can allow you to avoid an enemy’s attack or set Elle up for dealing a ton of damage by flanking an opponent. You can see how many times you can use Blink, thanks to the gauge displayed under Elle. Using Blink at the right time can help you keep your Break Gauge so that you can deal more damage at a faster pace, clearing a room before the enemies there end up becoming a real threat.

As you destroy enemies, you’ll be able to collect soul shards. Soul shards can be used to purchase a variety of upgrades and artefacts, that is, as long as you manage to rescue the individuals who run them! Barbara’s Atelier will offer you a chance to exchange soul shards to purchase upgrade options of elixir. Amanda’s Emporium – run by grandma Amanda – will take your soul shards to upgrade items. Stein runs the Vault of Souls, where there’s the option of boosting how much gold and how many soul shards she collects during every run. Smithy offers weapon enhancement plans, and you can invest soul shards to have him research new weapon enhancements for you. And then, there’s the Black Market Merchant who sells many magical items, asking for gold in return.


Elle’s stats will play a crucial part in how you approach your time with Crown Trick. There are hit points, which determine how much damage she can take before she is forced to return to the Hall of Reincarnation – which, yes, happens when her hit points reach zero -, the magic points she’ll use every time she activates a skill in particular, attack, which dictates how much damage she can deal to enemies, skill power, which affects how much damage skills can deal, physical defense and magic defense, which affect the resistance to physical and magical attacks, as well as her dodge, critical, and critical damage percentages.

The combinations for Elle’s loadout are extremely high since there are over 40 active skills to equip, more than 60 passive skills, over 30 items, more than 170 relics to find, and over 120 weapons to add to your arsenal. The skills you can equip can be obtained from elite monsters you will battle every now and then. These more powerful monsters are known as Familiars, and you should give it your all to fight and defeat them so that you can gain access to their abilities since they will allow you to extend your runs into the dungeon. 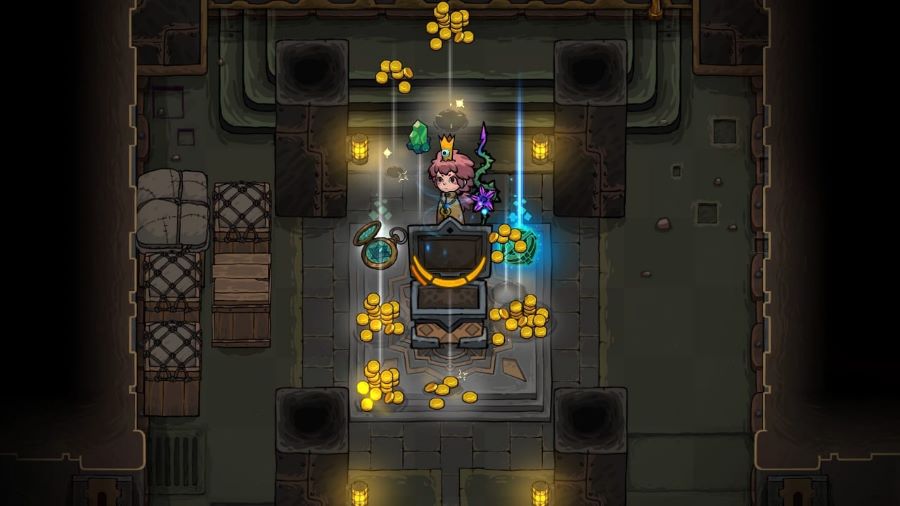 To give you an idea of what you’ll be finding during your time with this game, allow me to talk a bit about some of the weapons, relics, and items in your future. For instance, there’s the Royal Defender weapon, a standard issue sword for the Royal Guard that fills your heart with selfless courage when you swing it around, the Cardiotonic relic, a potent shot that will strengthen your body, making it immune to all harmful stat effects – with no side effects it seems -, or the Grilled Octopus item, a roasted octopus tentacle that has been lightly seasoned with sea salt. Now multiply that by the numbers discussed above, and you can get an idea of how rich the game is.


Crown Trick features an in-game achievements system with a ton of objectives for you to work on completing. There are achievements for collecting 200 and 5,000 gold coins, for collecting 200 and 3,000 soul shards, for the first time you die – and for dying 30 times -, for killing 100 and 2,000 enemies, for opening a random treasure chest, for opening one hundred random treasure chests, for using blueprints to unlock a bunch of weapons, items, and relics, for unlocking all of the familiars in the game, for beating each of the bosses in this adventure, or for stacking up poison on enemies five or more times in a single battle, to name some examples. 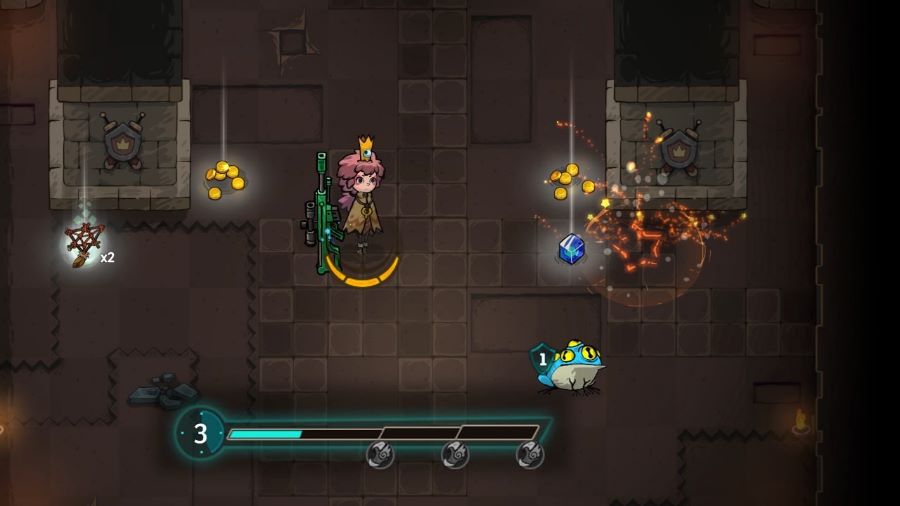 Crown Trick is a gorgeous looking roguelike dungeon crawler with some interesting gameplay twists that help it stand out on Nintendo Switch. There’s a ton to do in this adventure, with new elements that are added at a steady pace as you progress through the game. The way you can upgrade Elle’s loadout, adding new skills as you defeat elite Familiars. Every run that you do will allow you to gain new information, collect gold and soul shards, and bring you closer to defeating each of the many bosses that the game will throw at you. Crown Trick is out on Nintendo Switch with a $19.99 asking price.

Disclaimer
This Crown Trick review is based on a Nintendo Switch copy provided by Team17.

Root Film Out This Month